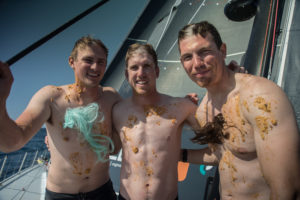 Having been travelling for some days now with ‘iffy’ coms, I have been out of touch with the race, but am delighted to see that the fleet has crossed the equator and is heading for Cape Town. The pace will quicken significantly now, especially once they have been freed from the doldrums and pick up the trade winds again.

While the Doldrums are often considered an area of no wind, in reality, it is more often an area of variable conditions, where storm cells bring sudden strong winds from a different direction to the prevailing lighter conditions. This means constant vigilance, and makes it difficult to choose the right sail selection.

“We were sailing south with the fractional code zero (a big headsail good for sailing with the wind on the side of the boat) on and doing about 20 knots boatspeed and we could see a big cloud line ahead, which means something is going to happen,” explained MAPFRE watch captain Rob Greenhalgh, giving an example of life in the Doldrums.

“It was a big header (windshift), 50-degree header, and an increase in breeze, which meant a frenzy of sail changes, so we’re now on a jib, going upwind, close reaching, so our boatspeed is significantly less.”

The above comment was made as the boats headed into the doldrums, but now the fleet is in the southern hemisphere. 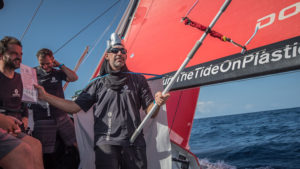 Charles Caudrelier performing the crossing of the equator ceremony.
on board Dongfeng. Photo by Jeremie Lecaudey/Volvo Ocean Race

Charles Caudrelier’s Dongfeng Race Team led the fleet over the famous line of latitude at 0941 UTC with the slimmest of leads over MAPFRE, Vestas 11th Hour Racing, Team Brunel and team Akzonobel. By 1126 UTC all five boats in the tight leading pack had crossed the Equator, the delta between them just shy of 18 nautical miles going into their ninth day at sea in Leg 2.

Turn the Tide on Plastic and Team Sun Hung Kai/Scallywag, in sixth and seventh respectively were only 60 miles behind Dongfeng. 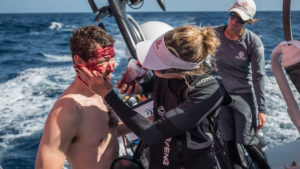 Sunrise on board Dongfeng and the crossing of the equator ceremony.
pic by Jeremie Lecaudey/Volvo Ocean Race

With the crossing of the Equator came the offerings to King Neptune, the Roman God of the Sea. Ancient maritime tradition dictates that any sailor that hasn’t yet crossed the Equator – known as a Pollywog – be inducted into Neptune’s court by the Shellbacks, those onboard with crossings already under their belts.

The induction ceremony usually involves a certain degree of hair shaving while being covered in whatever slop the team have managed to concoct over the previous few days. Four days’ worth of rotting freeze-dried food went over the heads of Dongfeng’s Equator rookies Jack Bouttell and onboard reporter Jeremie Lecaudey, while Team Brunel’s Peter Burling waved goodbye to his hair.

Across the fleet there were 21 sailors to initiate – while of the seven OBRs only Turn the Tide on Plastic’s Sam Greenfield was safe from Neptune. Even Turn the Tide on Plastic skipper Dee Caffari had to fend off desperate claims from her teammates that, despite having five laps of the planet to her name, she hadn’t been properly inducted because her previous Equator crossings had been solo. 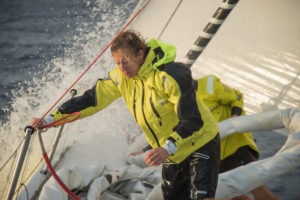 Annie Lush on the foredeck with waves crashing around her.
Photo by Rich Edwards/Volvo Ocean Race

“You’re going to really struggle to say that I haven’t done any proper Equator crossings,” she told her mutinous crew, laughing. “It ain’t gonna happen, and any revolt will be punished 10 times worse.”

Besides crossing into the Southern Hemisphere, Caffari’s team had plenty of reasons to celebrate. They pulled back a place in the rankings, overtaking Team Sun Hung Kai/Scallywag to move into sixth, and also deployed a drifter buoy that will measure salinity, dissolved CO2 and Chlorophyll-a (algae), and for the first time ever, microplastics, in the Atlantic.

Despite dropping to the back of the pack, Steve Hayles, Scallywag’s navigator, said he was relishing the battle – and that he expected their position slightly more to the west to pay dividends eventually.
“As far as Turn the Tide on Plastic goes we don’t in any way underestimate them at all,” he said.

A traditional race mark, Fernando de Noronha, a tiny archipelago around 220 miles east of the Brazilian port of Fortaleza, was removed for the 2017-18 edition to give the fleet carte blanche to pick their own route through the vast South Atlantic. But due to the weather pattern ahead, the seven teams are pretty much headed straight for Fernando as they line up to catch the stronger breeze lying 1,000 miles down the track.