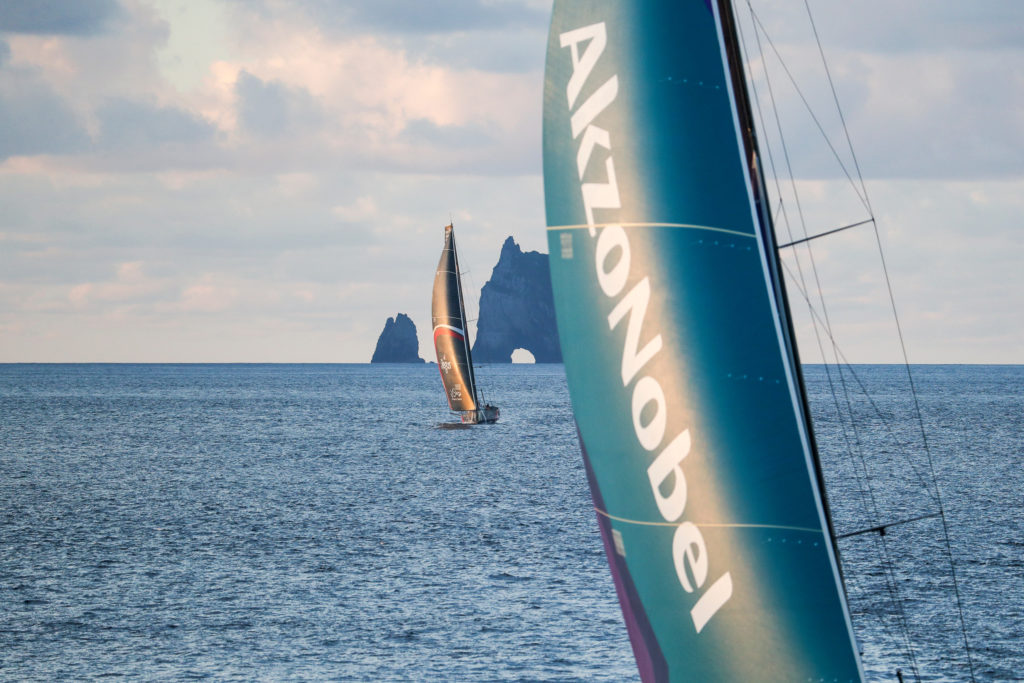 If anyone thought that ocean race finishes were not epic, you are mistaken as this was as close as it could get as just 2 minutes separate 1st and 2nd, and just 3 minutes separated 3rd and 4th.

This was a leg of contrasts, changing fortunes – and that desire to simply not give up until the finish line was crossed.

At some stages there were hundreds of miles separating boats, and then they would converge before going off on their chosen courses once more. At one stage it looked as if the overall race leaders, MAPFRE and Dongfeng would finish as tail-end charlies, but that too was not to be.

But, this leg was about the winners who fought each hard until the point of exhaustion, although it was the final 12 hours that opportunities arose for some, especially AkzoNobel who won the leg.

Hers was a tremendous win, and came after an epic final 24 hours, when a ridge of high pressure off the north east coast of New Zealand stalled the progress of the leading boats, allowing those behind to close what had appeared to be an insurmountable gap. 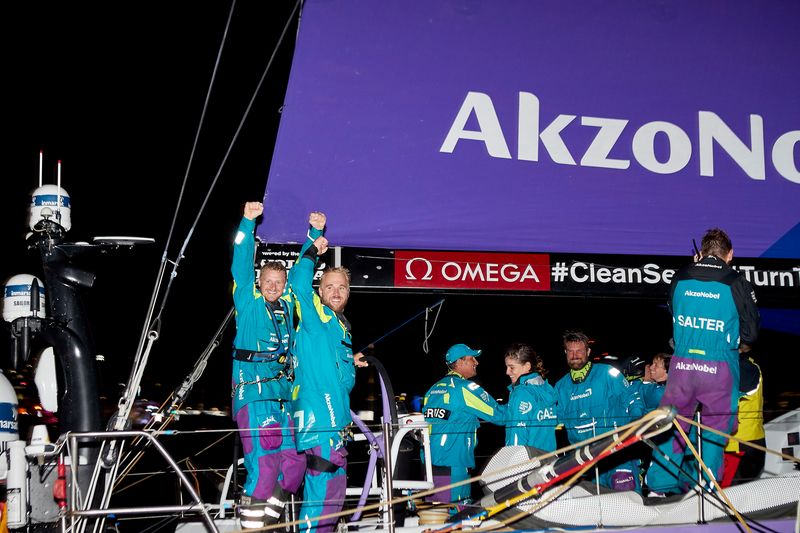 For team AkzoNobel and SHK/Scallywag, the buffer they’d built up over the past week was only just sufficient, and they were able to match race down the coast all the way to the finish line in the Waitematā Harbour, usually sailing within hailing distance of each other.

In the end, the margin at the finish was just two minutes between first and second place.

“It’s been a 6,500 mile match race, it’s unreal,” said Tienpont. “I’ve never sailed a race like this in my life. We’ve always been in each other’s sights. They were always there. It’s been neck and neck. Huge respect to Scallywag, they never stopped fighting and we never stopped defending. I’m so proud of our crew. They never flinched.”

“Our team never gives up,” said Scallywag skipper David Witt. “We just didn’t pull it off this time. We had our chances, but AkzoNobel were just a little bit too good this time. But we’ve come a long way since leg one.” 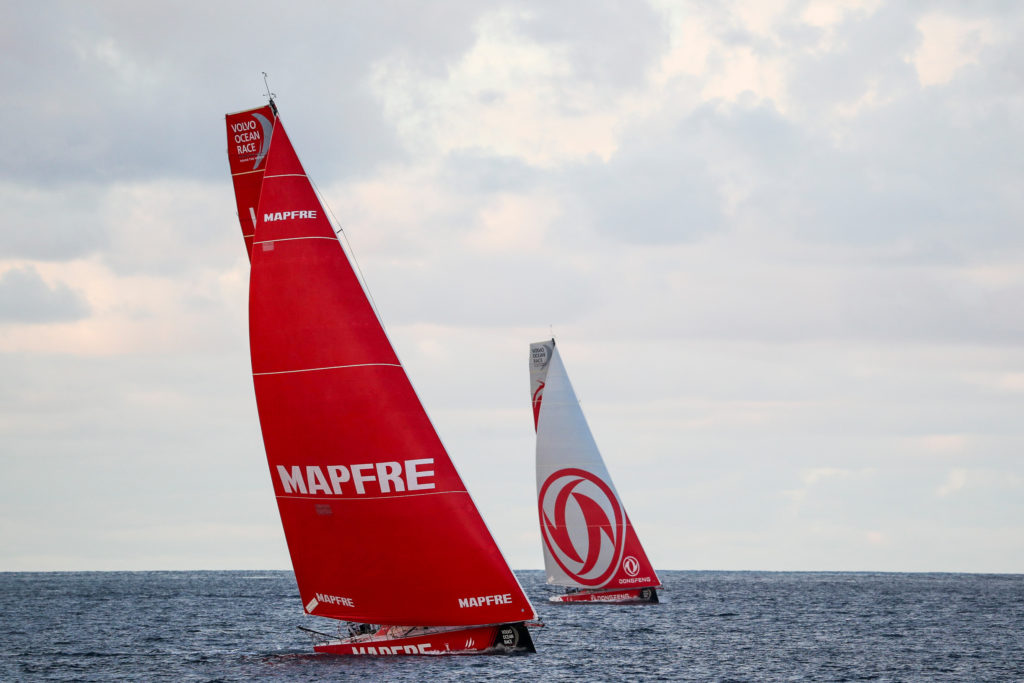 That’s how close it was towards the end of the leg between MAPFRE and Dongfeng.
pic by Ainhoa Sanchez/Volvo Ocean Race

The second place finish in Leg 6, combined with a leg win into their home port of Hong Kong, has elevated SHK/Scallywag up to third place on the overall leaderboard.

While the weather pattern of the last 24 hours made for a heart-stopping finish for race fans, it also led to a heart-breaking result for Dee Caffari’s Turn the Tide on Plastic.

Just 24 hours prior to finishing, Caffari and her team appeared poised to claim their first podium of the race, even while challenging for the leg win. MAPFRE and Dongfeng Race Team, first and second on the overall leaderboard, were over 60 miles behind Caffari.

It would have made for a well-earned and popular result for an underdog team. But as the leading trio bumped up against an unavoidable patch of calm winds, MAPFRE and Dongfeng roared in, closing the gap down minute by minute.

As darkness fell on Tuesday night and the wind picked up for the final 60-mile sprint to the finish, the two powerhouse red boats were within striking distance of Caffari and her team, just 2 miles back. And over the next 90 minutes, they were able to grind their way past, pushing Turn the Tide on Plastic back into fifth place with 20 miles to run.

While Caffari and her crew showed incredible fighting spirit, clawing ahead of Dongfeng Race Team once again as the boats raced through the Hauraki Gulf on the final approach, they couldn’t hold on, and would need to settle for fifth place, behind both MAPFRE in third and Dongfeng in fourth.

“It’s been a crazy 20 or 21 days, match racing all the way here,” said MAPFRE skipper Xabi Fernández. “We’ve been fighting with Dongfeng like crazy. We never stopped, we fought so hard, and now we feel very happy of course. We were hoping for opportunities in the doldrums and they never came, but finally they came today, and we did it.”

“We’re sorry for Turn the Tide on Plastic,” said Dongfeng skipper Charles Caudrelier. “They did a fantastic race and I think they deserved a third place finish, but that’s sailing, they’ve been unlucky today and we managed to come back… It was a good surprise.”

Overlooking the immediate disappointment of the day, this marks the best result of the race to date for Turn the Tide on Plastic and is a sign of progress for a young and improving team.

“We’re gutted, I don’t even know what to say,” said an obviously disappointed Caffari dockside. “We had a good race, and we thought we were going to have a better result. But those pesky red boats always seem to get it their way.”

Team Brunel remains on the race course, speeding towards the finish approximately 90 minutes behind their fellow competitors after falling victim to a bold tactical choice over the weekend that backfired and put them behind the rest of the fleet.

Vestas 11th Hour Race did not sail in Leg 6 after being shipped to Auckland for repairs. The team has lost ground on the leaderboard, with both Scallywag and AkzoNobel overhauling them to hold down third and fourth place, with Vestas 11th Hour Racing sliding to fifth. The team is expected to release an update over the coming days.