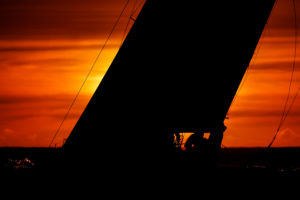 Dongfeng arrived at dusk and in 2nd place for the leg.
Photo by Pedro Martinez/Volvo Ocean Race

Dongfeng crossed the finish line under the shadow of Table Mountain at dusk after a voyage lasting 19 days, four hours, two minutes and 39 seconds.

With an average speed of 17.2 knots, she reached the end of the 7,000-nautical mile leg from the Portuguese capital Lisbon two hours and 52 minutes behind leg winner and new race leader MAPFRE, skippered by Xabi Fernandez.

Frenchman Charles Caudrelier, who is leading Dongfeng Race Team for the second successive Volvo Ocean Race, was delighted to secure the runner’s up spot after a tough stage that saw Dongfeng dominate proceedings for two weeks before falling back to fourth place and then recovering.

“It’s a good second place,” said a relieved Caudrelier moments after stepping ashore at the Volvo Ocean Race village at the Victoria & Alfred Waterfront complex in Cape Town. “At one point we were hoping to finish better, but we made a mistake. But we made a great comeback. It was fantastic.

“For this edition,” Caudrelier added, “we worked to be faster in strong wind and it has paid off. On board we have fabulous sailors, a lot of experience and exceptional high-speed helmsmen. That’s good, the next step will be fast!”

Caudrelier congratulated Fernandez and his Spanish crew who are now three points ahead of Dongfeng in the overall standings. “Well done to MAPFRE – they did an amazing job and deserve their victory here,” he said.

The Frenchman went on to express his gratitude to his own team, blaming himself for a gybe off the Brazilian coast that cost Dongfeng the lead.

“I thank all the crew for what they did and the way they did it. I felt very guilty for missing the timing of the gybe, but the team remained united. We were in such a strong position and it was a stupid mistake to go like that into the high pressure. We wanted to win too much and we lost a lot. But on board, the sailors have never reproached me. They said to themselves: ‘We are going to give everything to recover’ and we got back, little-by-little,” he said.

Navigator Pascal Bidegorry was elated to finally make landfall in South Africa. “As soon as I arrived, I felt so happy to be here. It is so amazing and it is worth all the hard work for the five minutes when you arrive with Table Mountain in front of you. I think it is the only place in the world that you get that feeling. Second place in the Volvo Ocean Race in Leg 2 is a good result,” he said.

Bidegorry was happy to take his share of the responsibility for the error off the Brazilian coast. “We did something stupid and I was sleeping at a bad moment,” he said. “What is difficult is that we spoke a lot the day before with Charles about the decision. It was right to go south, but we did not do what we wanted to do. I thought we were going to lose and it was horrible. All that day on starboard tack, we were not catching any of the pressure (wind) and we were losing to the other teams. It was not good. But afterwards you change your mind and you try to be reactive to the situation in front of you.”

Dutch sailor Carolijn Brouwer, one of two female crew on board Dongfeng alongside Marie Riou of France, was also impressed with the way the team handled adversity after leading for so long.

“We worked together as a team really well. We showed it on Leg 1 and we showed it again now. In a bad situation we can make a good situation. We made it right and this is the strength of the team,” she said.