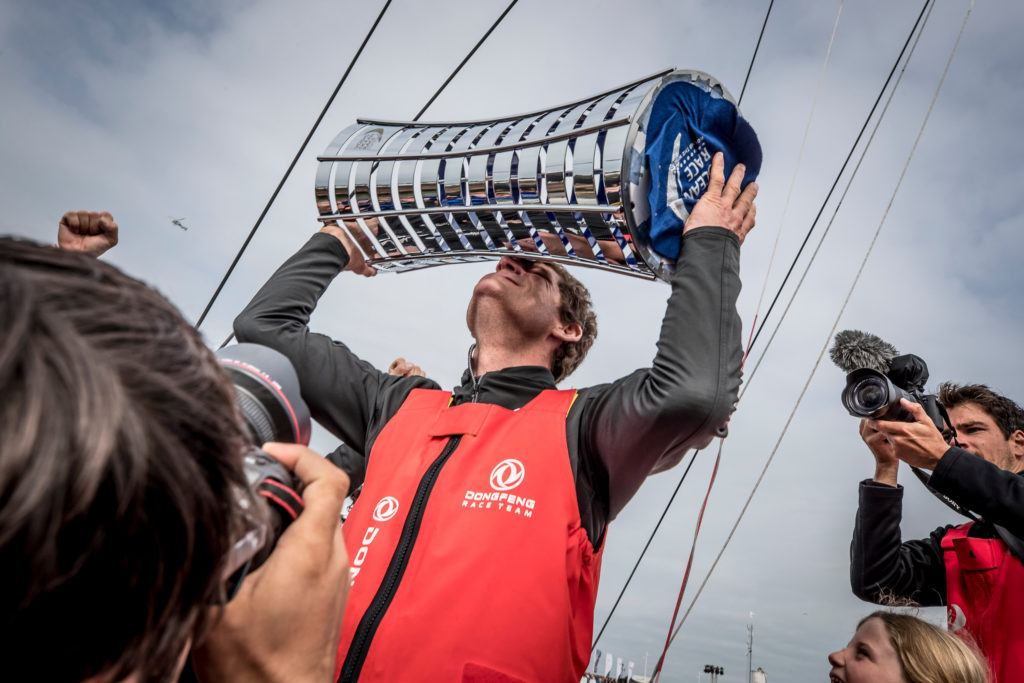 Charles Caudrelier lifts the overall winners trophy for the first time on the dockside.
pic by Ainhoa Sanchez/Volvo Ocean Race

WOW – what an exciting and close finish that literally went down to the wire and has been billed the closest finish in race history.

If you, like me, have faithfully watched and followed the race as it has wound its way around the world, that final leg into The Hague was an absolute nail-biter that had me fixated throughout the 970nm it took to finish.

With four hours to go I was absolutely convinced that MAPFRE had the race in the bag, but it was tense and tight, with anything still possible at that stage. Dongfeng looked dead and buried, but a little bit of good fortune, clever navigation and weather routing, saw them steal the lead just a few miles from the finish and cross the line in grand style.

Three teams started Leg 11 of the race on Thursday in a dead heat on the overall leader board. The finishing order between MAPFRE, Team Brunel and Dongfeng Race Team at The Hague would determine their place on the overall race podium.

Each of those three teams led at various points on the leg and had their opportunities to grab the prize.

But it was Caudrelier and his crew who made a bold call on Saturday evening to take a coastal route to the finish, which squeezed them tight against the shoreline and separated from the other leaders by a series of Exclusion Zones.

“We were not in such a good position, but we trusted our choice and we pushed,” Caudrelier said. “The others didn’t follow us, but we believed and we won…” 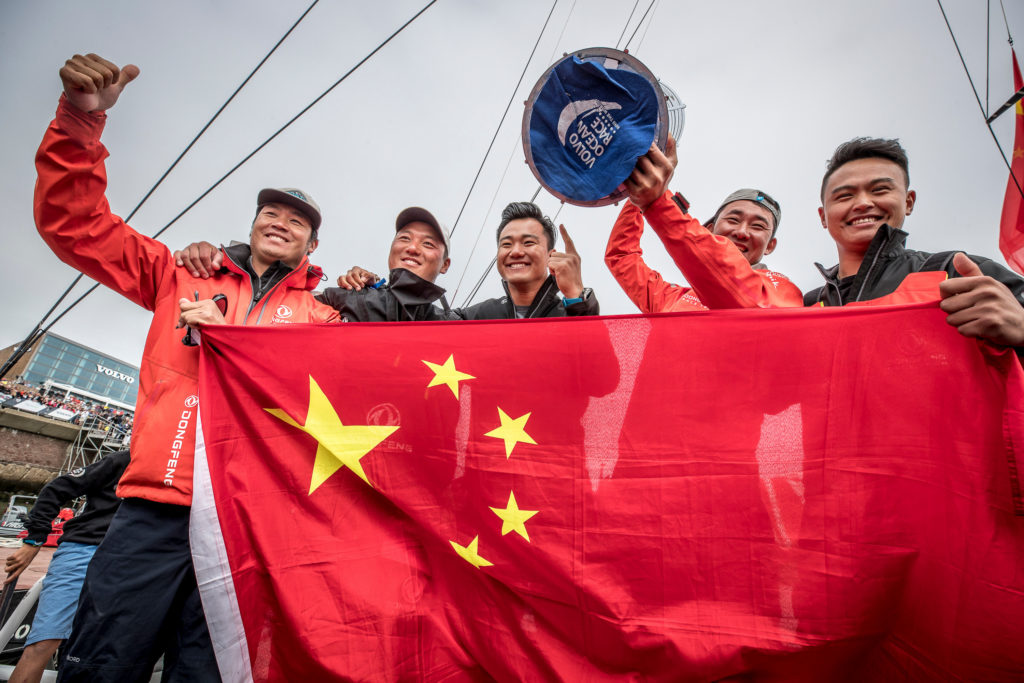 The decision hurt the team in the short term as they tumbled down the leader board. But by Sunday morning, with less than 100 miles left to race, weather routing projections had the top boats finishing within minutes of each other. None had been able to break away overnight, despite the significant splits on the race course.

“We knew that we would fall behind initially and that if it came good it would only be at the end. The last position report (1300 UTC on Sunday) we were 27-miles from the finish and they were 20-miles and we thought it was over. But then I did a small weather routing and it showed we could end up one-mile ahead so I woke everyone up and said, ‘let’s push!’”

As the teams finally converged again on Sunday afternoon, just a few miles from the finish, it was Dongfeng Race Team, flying down the coast from the north sliding in front of the offshore group, to earn their first leg win, propelling Caudrelier’s team to overall victory.

The overall results make this the closest finish in the 45-year history of the race and marks the first win for a Chinese-flagged team. It also means Carolijn Brouwer and Marie Riou were on board as the first women sailors to win the Volvo Ocean Race.

Xabi Fernández’s MAPFRE was third on the leg, which put the team into second overall.

“It has been tough,” Fernández admitted. “We sailed very well the whole way around the world and on this leg as well, so naturally we’re a bit disappointed. We were very, very close this time, but it was not quite enough. So we have to say congratulations to Dongfeng who sailed a little bit better than us.”

Team Brunel skipper Bouwe Bekking would have liked nothing more than to win the race for the first time in eight tries with a home finish in The Netherlands. But it wasn’t to be. His fourth place leg finish left the team in third place overall.

“Third place, still on the podium, I think we can be pretty proud of that as a team,” he said. “We thought we had made the right choice (to go further offshore) and we expected a windshift. It came 90-minutes too late and that was the race. But that’s yacht racing. And of course we have to congratulate Dongfeng and MAPFRE for their results.”

Second place on the final leg into The Hague was Dutch skipper Simeon Tienpont and his team AkzoNobel, who had previously secured fourth place on the overall leader board.

“It’s incredible to finish on the podium in our hometown,” Tienpont said. “We would have loved to have been fighting into The Hague for the final podium but to have set the 24-hour speed record and to get six podium finishes in the race is a testament to the job everyone on our team – on the boat and on shore – have done.” 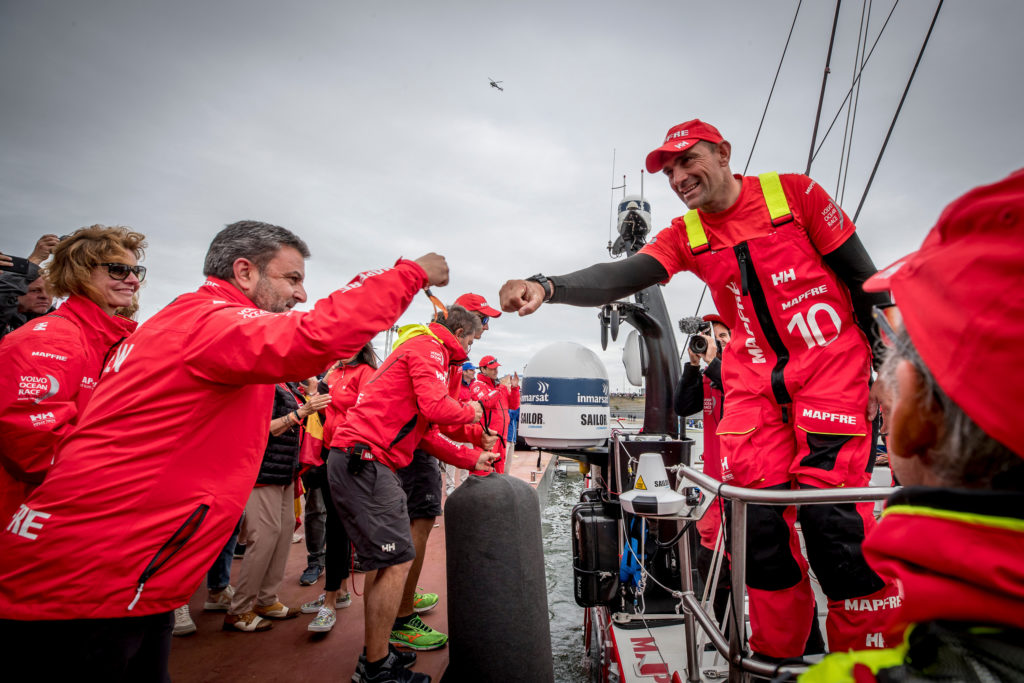