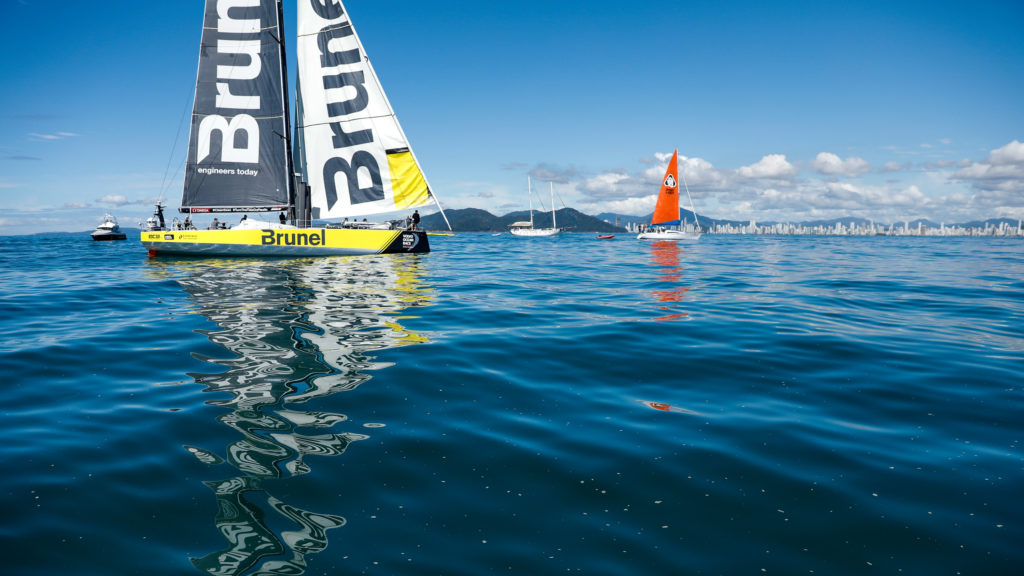 Watching the final stages of this leg unfold on the tracker and later the livestream, it was tense stuff, even for viewer and must have been thousands of times tougher for those aboard Brunel and Dongfeng.

It was slow, intense and enthralling as one watched the distances change, and Dongfeng at times close the gap to under 1nm, and for Brunel to counter that and extend her slender lead.

But with world class sailors aboard Brunel, and indeed possibly the world’s best helmsman and close-quarters tactician in Peter Burling aboard Brunel, the smart money was on them not to do anything stupid in the closing stages. In fact one could see them defending their position and staying between the finish and the opposition. 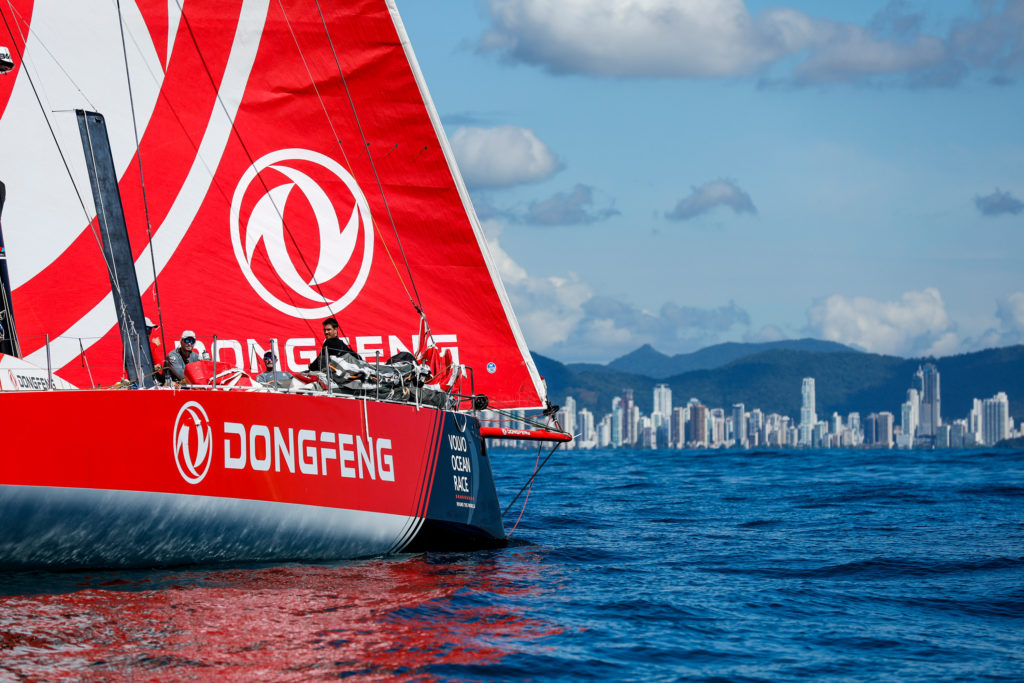 Dongfeng was just unable to haul in Brunel as they closed the finish in light airs.
pic by Dongfeng closing in on the finish.
pic by Ainhoa Sanchez/Volvo Ocean Race

But finally a puff of wind close to the finish saw the boat sit up and cross the line in first spot.

This was easily the most difficult stage of the Volvo Ocean Race 2017-18, and the sailors will almost certainly rank it as one of the hardest in the history of the race.

But Bouwe Bekking used his veteran nous to fight through all the challenges and lead Team Brunel to an incredibly narrow win over Charles Caudrelier’s Dongfeng Race Team. After racing nearly 7,600 nautical miles over the ground, the margin at the finish was less than 15 minutes.

“It’s been an unbelievable leg,” Bekking said. “We are sad in our hearts about the loss of John Fisher (SHK/Scallywag) and that sits very deep with us, but from a sporting standpoint we sailed a very nice leg so we take confidence from that.”

This leg from Auckland, New Zealand to Itajaí, Brazil took the teams deep into the Southern Ocean, with an amended Ice Exclusion Zone set at far south as 60-degrees south latitude.

Down in the ‘Furious Fifties’ (south of 50-degrees latitude) the wind and cold was relentless. Steady gale force winds of 30-35 knots, with 4 to 6 metre seas was a normal day. Squalls could bring gusts upwards of 50 knots and towering seas. The temperature plummeted to just above freezing and snow and hail were common.

The teams jostled for position throughout the first 7 days of the leg, but as the boats gybed along the Ice Exclusion Zone, Brunel slid south from a position slightly further north of the leaders, and emerged with a 20-mile lead.

Bekking and his navigator Andrew Cape were able to hold this advantage past Cape Horn, picking up the first bonus point available on this leg. And apart from one position report three days ago where Dongfeng showed as the leader by virtue of a slightly more westerly position, Brunel has nursed this delicate lead all the way to the finish line in Brazil.

It hasn’t been easy. In the final 48 hours they’ve had Dongfeng close to within one mile, and over the final hours, in the lighter, shifty conditions near the finish line, it was an open contest; either team could win.

For Brunel, the victory means the team has collected all 16 points available for this leg (14 for winning the double-point scoring leg, a one point bonus for Cape Horn and a one point win bonus) and nearly doubled its point total from 20 to 36 points.

Bekking and Brunel are back in the game.

“We always wanted to aim for the maximum points this leg, as it means we would most likely be top three,” Bekking said. “From now on it will be a matter of just chipping away. We’ve seen stranger things happen in the past in this race so I think we’re now in great shape to go for the finish in The Hague.”

For Caudrelier, the second place finish and 12 points won may be enough to grab the overall lead from MAPFRE, who have led the race since Leg 2. With a damaged mast track and main sail, MAPFRE hasn’t been able to hold on to the leaders and is now in fifth place, battling to salvage two more points by trying to overtake Turn the Tide on Plastic.

“It’s a fantastic result for us. We have managed to come back into MAPFRE after plenty of frustration on the previous legs,” said Caudrelier. “This time we’ve managed to keep them back and far away and if Turn the Tide on Plastic can hold on we have a chance to take the overall lead.

“But the first thing was to finish the leg with everyone on board and safe,” Caudrelier continued. “Of course we are thinking about what happened to Scallywag and John Fisher… I’m so sad for his family and the whole Scallywag team. That is a fantastic team and they lost one of their own… But we are here to push the limits; that’s why we sail in this area. Sadly, it happens, and it’s always too much, but I think about John and all of our team thinks about him and his family.”

There was no overly cheerful mood on board Brunel when they came ashore. Bekking addressed the press with a lump in his throat. “The whole team are deeply touched by the loss of their opponent and fellow sailor, John Fisher, who went overboard last week on Team Sun Hung Kai/ Scallywag” said Bekking.

“Although we have won the leg, the team aren’t in a mood to party, which is understandable. The loss of John Fisher has been felt deeply by everyone. Nevertheless, it was a great feeling to finish in first place.”

World Sailor of the year Peter Burling was relieved after the finish in Itajai. Burling: “It’s good to finally have a good result. I felt we definitely made a lot of improvement since the start of the race. It’s great that it all comes together in this one and incredible tough leg. It probably exceed all my expectations. We did just over 17 knots in a straight line, that’s ridiculous considering the boats we’re in. For now I’m happy to be back a-shore.”

“The worst moment for me was obvious the e-mail we got about the incident with John Fisher. The mood onboard was depressed for a few days and actually it still is. I only can pay my condolences to his family, friends and the rest of the Scallywag team.”

Bouwe Bekking passed the trophy straight to his young teammates. “They challenged us ‘old-rots’ continually. Engineered to move faster. Literally and as a figure of speech. This achievement is really a team-result. It’s the balance we needed to find. Peter (Burling) always wants to push, sometimes too hard. But then we just convince him to push a little less. This win is a real team-effort!”

Besides praising the talented, young crew members, Bekking also specifically praised his experienced navigator, Andrew Cape. Bekking: “I know Cape has been criticised a lot, which in my opinion was not right. He has once again shown that he is one of the best navigators in the world.”