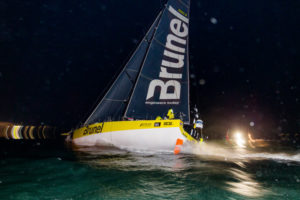 Skipper Bekking was realistic on arrival in Cape Town. Bekking: “In general we are satisfied at this stage. Of course the last three days are a shame. At the time of the front passage we were only ten nautical miles behind the front runners. The moment you just miss that front passage, the difference quickly becomes one hundred nautical miles and you cannot claw that back anymore. It’s frustrating, but that’s sailing. Overall, I think we can be satisfied with where we are at this stage. We started late with preparations and have had a good learning curve.”

Bekking: “The newcomers have now sailed 7,000 nautical miles in a row under pressure. That is just very important for these guys to get into the routine optimally. I’m sure they learned a lot at this stage.”

It’s not only the newcomers that have learned a lot. Bekking: “We want to keep learning and improve ourselves as a team. These 7,000 nautical miles were very important to us all. We are now entering the next Southern Ocean stage. That counts for double points. There you can make a difference as a team. But it is not only the next leg that is important. As a team you will have to continue to learn continuously. The best working team will cross that final finish line at the ultimate destination in The Hague in first place.”

Leg 3 to Melbourne is the first Southern Ocean leg of this Volvo Ocean Race. “Before we arrived in Cape Town the new boys were already complaining that it was a bit cold. I have already warned them that this is nothing at all. It only gets really cold when the anemometer starts to freeze on the way to Melbourne” said Bekking.