Volvo Ocean Race. Advantage to the South As Fleet Splits 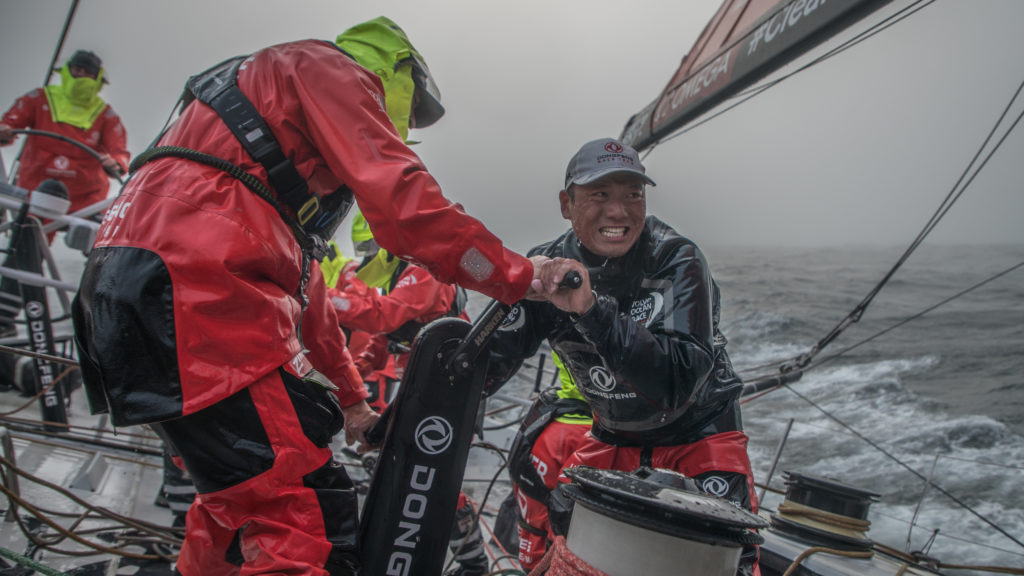 Now a few days in to the leg, and all settled down to their routines at sea, we have a fascinating battle on our hands with two distinct groups in the fleet both looking for supremacy from their chosen routes.

Most telling is that both MAPFRE and Dongfeng are not letting each other out of their sights so to speak, as MAPFRE covered Dongfeng when she went north. These two teams are slugging it out for overall race supremacy, with this double points leg being make or break for them.

And if one thinks that it’s all friendly out there, it’s not as any and every advantage possible will be taken. Dongfeng made a move as the new position reports were issued to the fleet, and in so doing was able to keep the fleet blissfully unaware of her move until 6 hours later when the new positions were again made known. 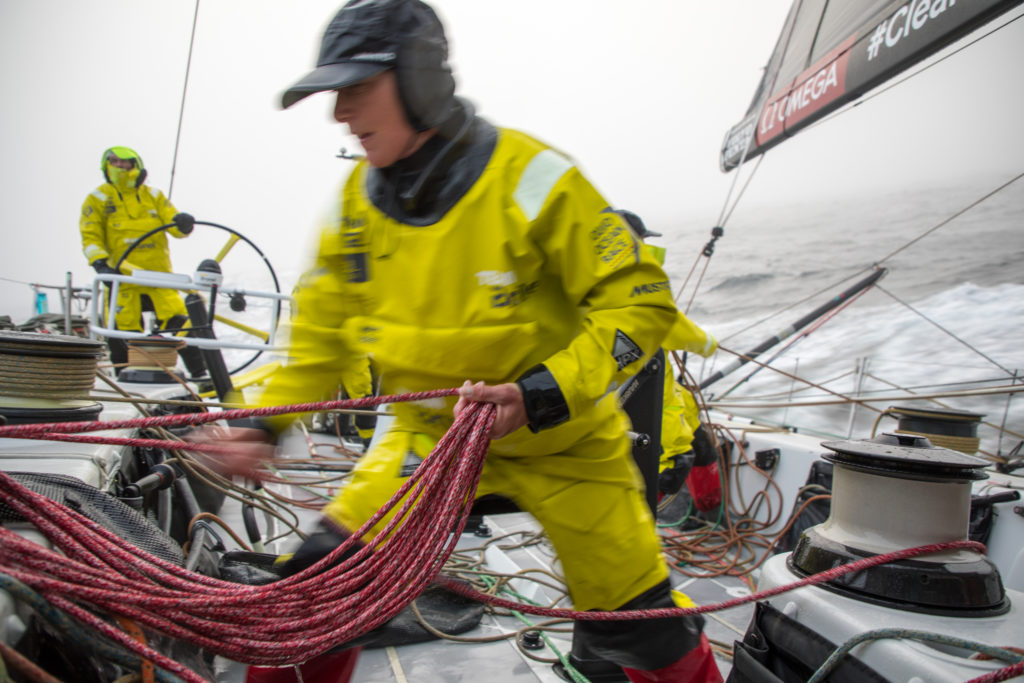 On board Brunel. Abby Ehler is working in the fog.
pic by Sam Greenfield/Volvo Ocean Race

Skipper Bouwe Bekking and his Team Brunel lead a southerly group of four boats who are taking advantage of stronger winds to open up an advantage as a split develops in the fleet.

To the north, wallowing in lighter conditions sit the overall race leaders, MAPFRE, as well as second-placed Dongfeng Race Team, and Turn the Tide on Plastic. Average speeds for these three were in the 7 to 10 knot range for much of Tuesday morning. 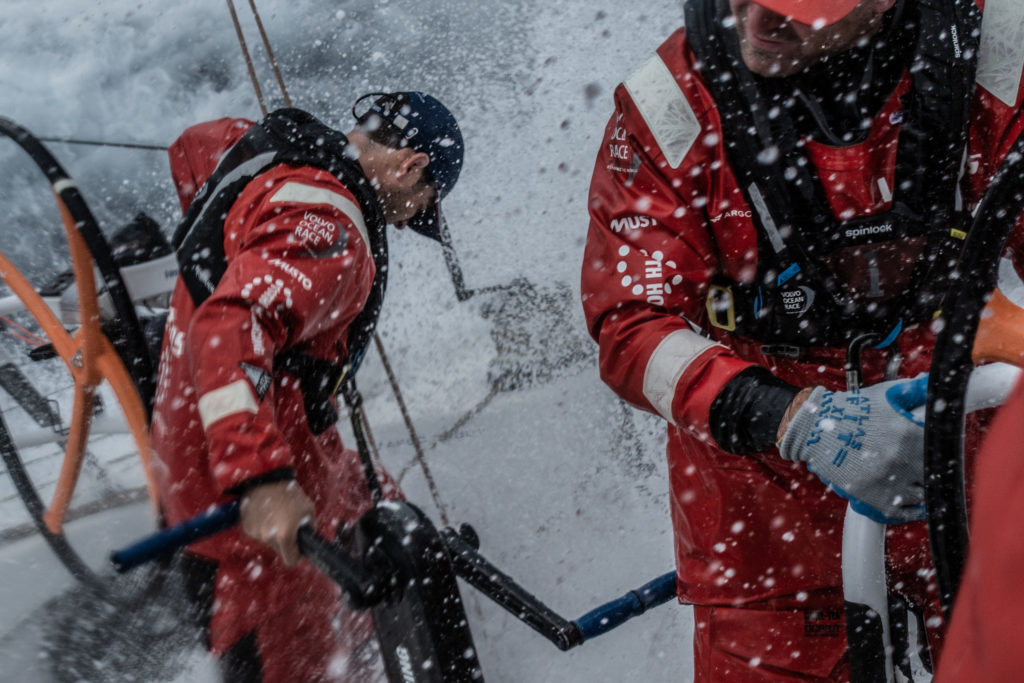 On board Vestas 11th Hour Racing Charlie Enright and Tom Johnson are holding on.
pic by James Blake/Volvo Ocean Race

Meanwhile, the southerly quartet has been roaring along at over 15 knots, and at one point had opened up a 30-mile advantage over the northerners.

Bekking explains what is at stake:
“As expected there is a big split in the fleet, so it will be interesting to see who comes out ahead in five days time,” he wrote in a blog to race headquarters. “We are taking the southerly route and have managed to stay ahead of the front, basically we have always more breeze than the forecast… The boats in the north follow the great circle, the shorter route and will face lighter winds over the next 24 hours, but should have a little better current from the Gulf Stream. In the last report they had 6 knots compared to the 25 knots of wind we have, nervous times for them. But I think they will be alright in the long run. We’ve seen that before in trans-atlantics. We will also have to face the lighter winds and even have to tack tomorrow.” 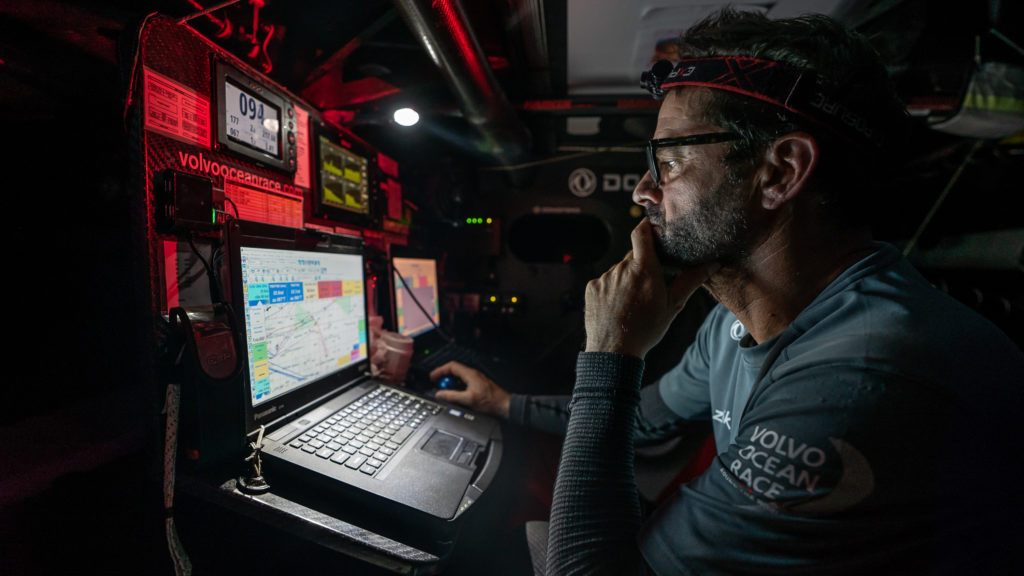 Aboard Dongfeng Pascal Bideggory is hard at work at the nav station.
pic by Jeremie Lecaudey/Volvo Ocean Race

And already, the gap is narrowing on Tuesday afternoon, speeds were up on Dongfeng, MAPFRE and Turn the Tide on Plastic, all of whom were sailing a more direct route to the finish than those to the south and therefore been narrowing the deficit on the ranking. With over 200 miles north/south separation, the leverage between the groups is enormous.

“It’s a massive split,” said MAPFRE’s Blair Tuke. “It’s a little bit of a worry that Brunel has so much separation from us. It could work out well for us but it might not… It’s one of those things where you have to sail the wind you’ve got. We’ve done that and we’ll have to see how it plays out through this transition as the new breeze comes in over the next day or so.”

For all the fleet, the conditions have been more pleasant than anticipated, with the Gulf Stream providing warm temperatures to make life on board more comfortable.

“We have enjoyed flat water, warm conditions and we have managed to keep moving,” Turn the Tide on Plastic skipper Dee Caffari wrote. “We have light winds ahead and by this evening we will be in new breeze on the other gybe that will increase. This low pressure we will ride for a few days so we need to push hard while we have it and hang on in there.” 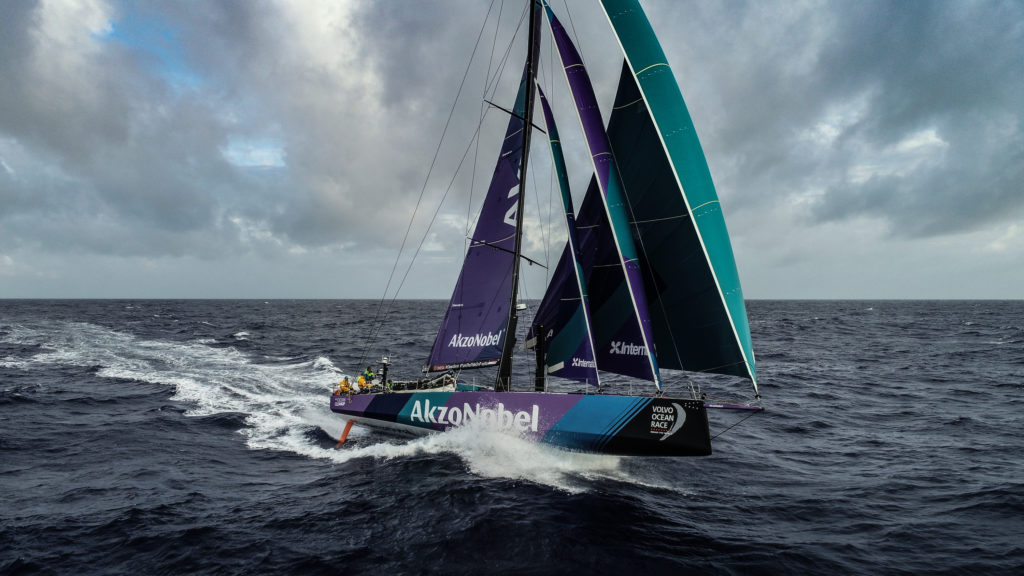 AkzoNobel surfing the waves and flying along at 25 knots.
pic by Konrad Frost/Volvo Ocean Race