Vendee Globe – They’re on Their Way 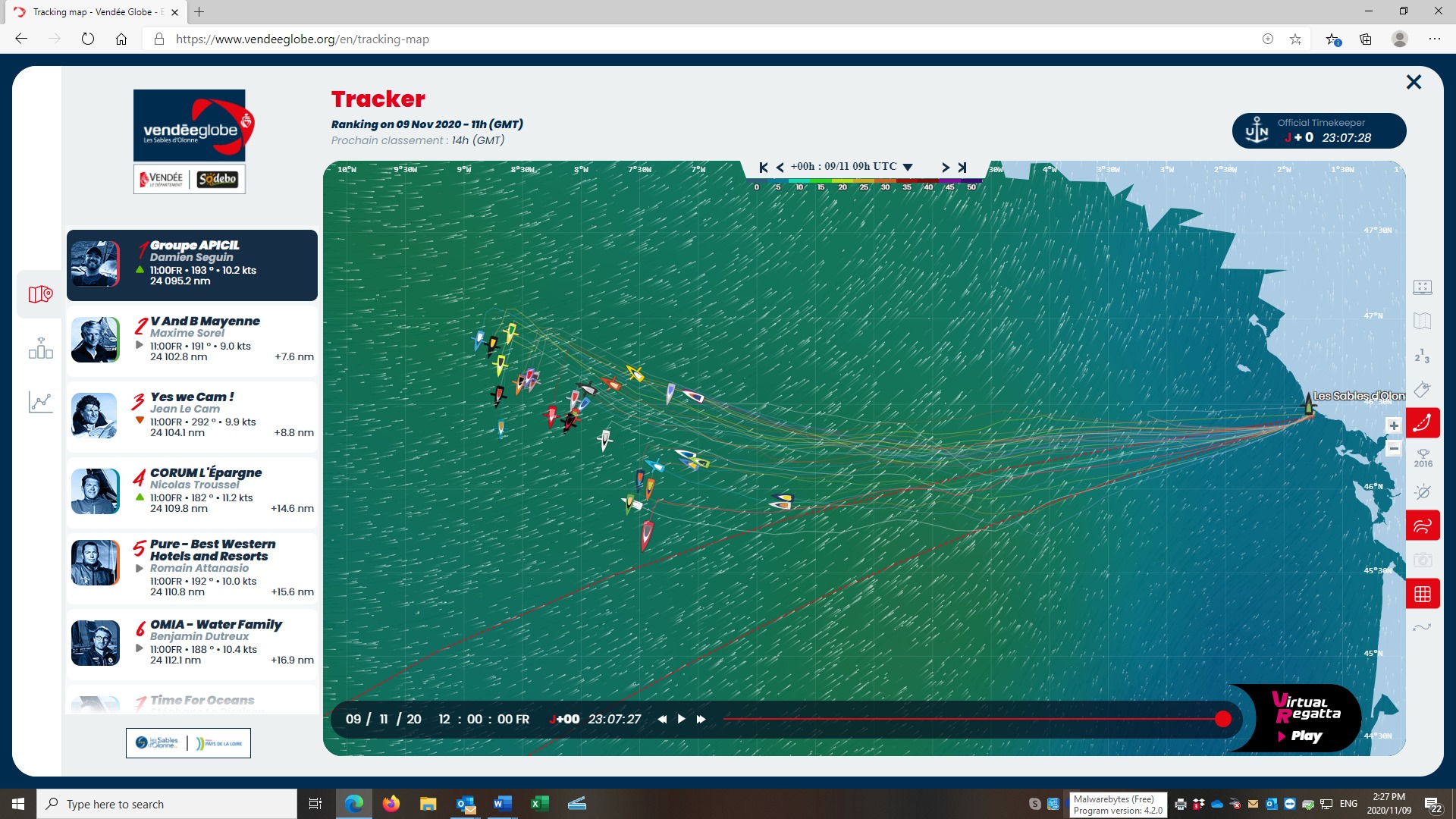 by Rob Sharp
(This report is brought to you by Abromowitz Sharp & Associates – Yacht Brokers – https://www.yachtbrokers.co.za)

The Vendee Globe kicked off yesterday with a delayed start due to fog and the resultant poor visibility – not a good way to start any race, so the wait was welcomed by all 33 competitors. At the start however, Frenchman, Louis Burton was slightly impatient and expensively pipped the fleet on the line to now look forward to a 5 hour peel off before the boat reaches latitude of Lisbon – he does this by passing the same latitude twice 5 hours apart.

This year sees a record 33 entrants with 9 nationalities represented, and 6 women lining up against the 27 men.

What has been and maybe still is seen as the “French Open”, this pinnacle of shorthanded sailboat racing has had only French winners since the 1989/90 inaugural event, with British 5 time entrant, Alex Thomson, securing a 2nd last time round and a 3rd the time before that. 18 of the 33 are newcomers to the Vendee but as newcomers their respective résumés are hugely impressive.

The first Vendee saw victorious Frenchman Titouan Lamazou spend 109 days at sea and some 27 years later, the highly talented Frenchman, Armel Le Cléac’h shaved 35 days off that time and spent 74 days fighting off Alex Thomson who was pipped to the post by 16 hours. The record this time will for sure be broken, or rather shattered, and I am saying a sub 70 day affair. Who will keep it together with the foils extended subject to collisions with UFO’s and of course the physical fatigue this time round playing a major part as the foilers fly and skim across the oceans and with the boisterous movement of the boats between “take-off” and “landing” the skippers will be hanging on as their charges hurtle round the planet at speeds yet to be seen on the Vendee.

My fun fact of the day: The tech advancement of the boats has resulted in this huge reduction in the time lapping the planet. The sailors, one can argue are better equipped in terms of what weather info is readily available (but that’s still tech to me) – when one looks at the Boston Marathon for example – in 1975 Bill Rodgers won in a time of 2hrs, 9 minutes and 55 seconds. 44 years later, Kenyan distance runner, Lawrence Cherono shaved just 2 minutes off that time.

The embracement and adoption of the technical advancements available to us is key to development and the sport of sailing is very much benefiting from this. Of course the purists amongst us do not like what is happening and would rather see the boats stay on the water and not levitate above it for extended periods of time.

The bulk of the fleet have put in their first tack after some 160 miles on Port.

(This report is brought to you by Abromowitz Sharp & Associates – Yacht Brokers – https://www.yachtbrokers.co.za)