Transatlantic Race 2019. They’re Off Across the Pond

It would be nice to imagine that the 3,000-nautical-mile route for the west-to-east Transatlantic Race 2019 has changed little since pioneers from the New York Yacht Club braved the route from New York to Cowes via the Lizard back in 1866.

By modern standards, their voyage was reckless, leaving in December on boats designed to be raced inshore. In addition, today we have more contemporary problems such as the Greenland ice sheet melting at an alarming rate, increasing the ice flow drifting south.

The Race
Taken down by the Labrador Current, the icebergs splay out across the Atlantic south and east from Newfoundland. In order to avoid them the New York Yacht Club (the race’s organizer alongside the Royal Yacht Squadron, Royal Ocean Racing Club and Storm Trysail Club) announced the sizable exclusion zone, “Point Alpha.”

In fact, Point Alpha is one of three exclusion zones the competitors must negotiate. The first requires competitors to remain south of a west-to-east line along 40° 56’N in order to keep them away from the Nantucket Shoals. These ever-moving shallow waters extend some 40 miles southeast from Nantucket Island. Mike Broughton, navigator on the 82-foot ‘Aegir’, being campaigned this year by New Yorker Clarke Murphy, remembers crossing them in 2011. “It was very scary. The depth was going down to less than 1 metre beneath the keel, but we got away with it,” said Broughton.

Next up is the critical habitat area for right whales to the east of Cape Cod. For race competitors, this exclusion zone extends down to a point at 41° 00’N/069° 05’W, the shape of the zone roughly conforming with the 1994 critical habitat area, as designated by the NOAA Fisheries. 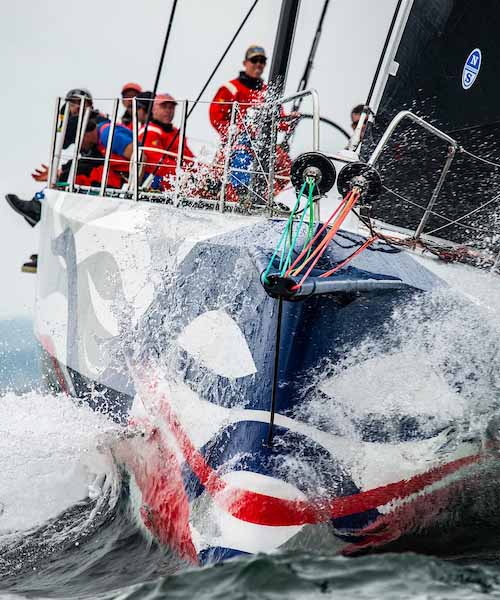 But these diversions are trivial compared to the Point Alpha ice exclusion zone. Considering that the rhumb line from Newport to Land’s End passes through east Newfoundland, this zone’s reach extends some 340 miles south, 500 miles southeast and 600 miles east of Newfoundland’s coast. This zone means that the Transatlantic Race 2019 fleet will pass some 120 miles south of the Grand Banks, thereby avoiding its spooky and danger-laden mix of shallows, thick fog and fishing fleets.

Keeping competitors south also means that, until they are able to start turning north at 047°W, they will be sailing in the unnaturally warm waters of the Gulf Stream. In the 2015 race competitors were still experiencing these half way across the Atlantic.

According to Broughton, the Gulf Stream currently has a slightly different complexion. “Its ‘west wall’ is much more fragmented than usual – there are lots of little short bursts of hot water,” Broughton said.

Through judicious use of satellite thermal imaging, which clearly contrasts the Gulf Stream’s 21-22°C warm water against the Labrador Current’s cold water, that can be as chilly as 2-3°C, it is still possible to identify and benefit from favourable eddies. “There are some areas where it is still 4.5 knots, but the ‘river’ has split up over a bigger area,” notes Broughton.

For competitors, the large size of Point Alpha means that they’ll be around one-third of the way into the race before they’ll be able to sail a free and unconstrained course. This will last until they are into the English Channel when they must pass through the Lizard Point Gate – a line running 4 nautical miles south from this famous landmark that has served as the reference point since the very first transatlantic races. The present 6-day, 22-hour record from Newport to the Lizard was set by George David and the crew of ‘Rambler 100′ in the 2011 race. 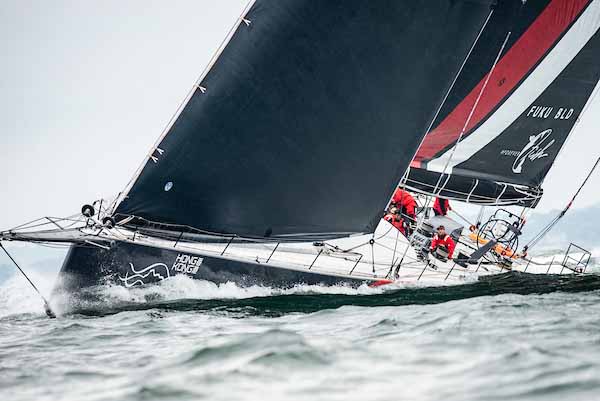 “It will be fairly decent getting out of Newport and reaching off towards the Nantucket Shoals and Point Alpha, but then once we get beyond that we’re going to have a massive 500-mile wide ridge of high pressure that just blocks everyone,” said Seddon. “So, there is a good chance that the slower boats will just come charging into the back of us.”

According to Seddon, they will hit this meteorological brick wall around two and a half days into the race. How long it will take to sneak through that remains to be seen, but it seems likely that the fleet will compress. Beyond that the forecasts are not yet aligned.

“Most forecasts are saying it will be downwind back to the UK and it could get light again off Ireland,” said Seddon. “We are looking to get to the ridge and then reappraise.”

If the Azores high is on station, it could allow the boats to recover some ground after exiting the ridge into the westerlies around its north side. This was the scenario for ‘Phaedo’ four years ago when they were parked in a smaller ridge, but once out were able to average 610-mile days to the finish. At present the best guess time to Cowes for ‘Scallywag’ is 8.5 to 9.5 days, says Seddon.

Normally in yacht races scored under IRC corrected time, a compression in the fleet typically favours the small boats. However, given the length of the Transatlantic Race 2019, there is likely to be many more hurdles than just the ridge. For example, the race could be decided in the English Channel where the powerful tide affects the bigger/faster boats comparatively less.

“If we have 10 knots of breeze coming up the Channel, we’ll be alright against the current, but the smaller boats will really struggle,” said Seddon. “A lot of it will come down to that. Plus, we have the gate off the Lizard and if you get to that at the wrong state of the tide you will have a lot of current going against you.” A similar park-up can happen should a boat’s arrival at the western end of the Solent coincide with the start of the ebb tide.

What is certain is that with or without course constraints, the Transatlantic Race 2019 will be as fascinating as it was 153 years ago, albeit with much more ability for the public to follow it in real time on the YB tracker. 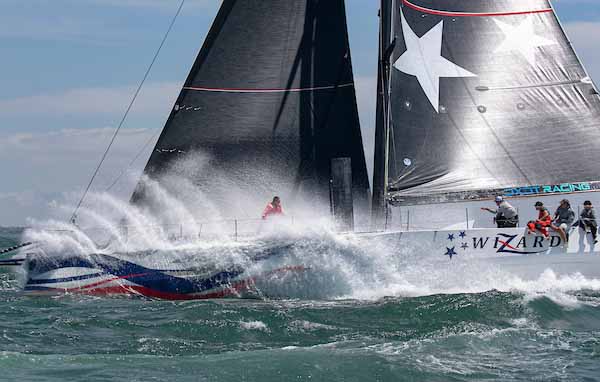 The Start (Yesterday 25 June)
Four and a half hours after the final start of the Transatlantic Race 2019, the fleet of 13 yachts was south of Martha’s Vineyard and was beating in 15 to 20 knots of south/southeasterly wind towards the first virtual mark south of Nantucket Shoals, led by the three largest boats, ‘SHK Scallywag’ (Dovell 100), ‘Wizard’ (Juan K VO70) and ‘Aegir’ (Rogers 82).

Based on weather forecasts, the race is shaping up to be a long one for the 120 sailors competing in the 3,000-nautical-mile race to Cowes on the Isle of Wight in England. The forecast shows it could be very wet as a front clears off the East Coast of the U.S., followed by light winds with the likelihood of the fleet compressing around Point Alpha, the ice zone limit.

“If we live through this afternoon’s thunder and lightning, very frightening stuff, it gets very light tomorrow as the front moves away,” said Mike Broughton, navigator of ‘Aegir’. “We need to keep under the rain today to keep moving. Overall, we’re looking at a pretty unconventional race with light winds early next week and plenty of winds ahead of the beam.”

The three classes got underway between as scheduled and without incident. With the start line extending from Newport’s iconic Castle Hill Light, a southerly wind of 10 knots propelled the racers out of Narragansett Bay. A few boats started on port tack, but by the time everyone could clear Brenton Reef they were all on starboard tack and making an east/southeasterly course towards the first virtual mark south of Nantucket Shoals.

Laurent Pagès, the project manager for Eric de Turkheim’s ‘Teasing Machine’ (Nivelt/Muratet 54), noted the complexity of the racecourse that lies ahead.

“It’s going to be a long race, hopefully the second half gets faster than predicted,” said Pagès, who won the Volvo Ocean Race 2011-’12 aboard ‘Groupama 4′. “Our focus is to get a good start and do the right things to kick off from Newport. I think we’ll have a clear idea what kind of situation we’ll have in a few days.

“Every boat has its strengths, and we’ll have varying conditions with key strategical calls to make,” Pagès continued. “There’s the Gulf Stream, situations with high-pressure systems… many things to play with. It’s going to be very challenging tactically.”

The past few days have seen frantic preparations for many of the racers. Jean-Pierre Dick has two new crew aboard ‘The Kid’ (Verdier JP54) who’ve never raced trans-Atlantic before, which had him concerned for safety. Meanwhile, Joe Mele’s ‘Triple Lindy’ (Cookson 50) was in and out of the water five times over the span of three days, according to navigator H.L. DeVore.

“I think Joe was unaware that walking under a ladder is bad luck. We finally stopped him a few days ago,” joked DeVore, an experienced navigator competing in his first trans-Atlantic race. “We’ve had all kinds of challenging, last-minute preparations: modifications to the rudder bearings, new parts for the satellite phone, even smoke in the engine. We’re happy to be tested and sorting this stuff out now rather than in the middle of the ocean.”

Aboard the J/52 ‘True’, co-skipper Ryan Hughes was also busy with last-minute preps. Hughes, 29 years old, has crossed the Atlantic four times, but is racing for the first time.

“It’s been a mission to get ready,” said Hughes. “We had to replace the hydraulics for the boom vang and backstay, so have spent some time dialing in those systems. But the boat’s up for the challenge. It’s been to the Caribbean and back and has raced the Newport-Bermuda Race. It’s been put through the ringer.”

On Mark Stevens’ McCurdy 49 ‘Kiva’, a repeat entry from the 2015 Transatlantic Race, navigator Hank Halstead showed his unbounded exuberance when talking about the race ahead.

“We’ve got a marvellous crew,” said Halstead. “This is a boat that Mark and I have always sailed double handed for the past 20 years. Our only race fully crewed was the Transatlantic Race 2015 four years ago. It’s pretty much the same crew back. The experience level is over the top. I’m stoked. It’s looking like we’ll eat some salt the first few days and then some drifting. I can handle that.”

It’s a fascinating race where the navigators and weather routers will certainly have to sing loudly for their supper!