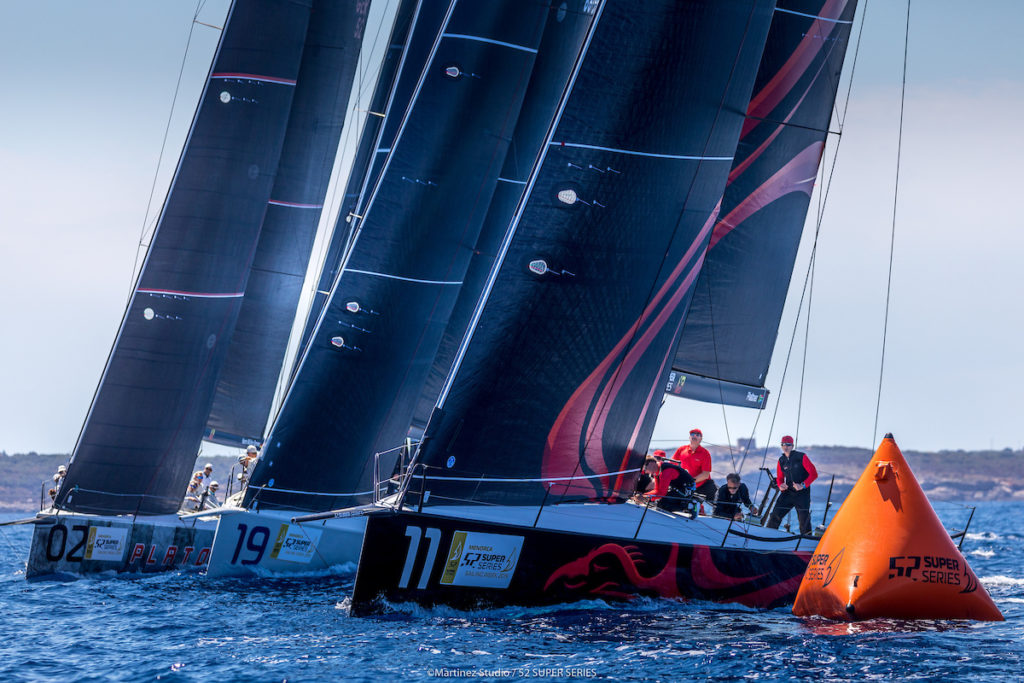 Phoenix 11 on the inside.
pic by Martinez Studio

The 52 Super Series is established as the world’s leading grand prix monohull yacht racing circuit, with 2019 being the eighth season of racing – and it’s shaping up to be the biggest and best yet, with the first series for 2019 kicking off yesterday in Menorca.

South Africa is represented in this event with not just one boat, but two this year. Hasso Plattner and his daughter Tina are campaigning them with world class crews which include a smattering of South Africans. On occasions just one of the boats will compete. Both boats are sailing under the Royal Cape Yacht Club burgee, and are named ‘Phoenix’.

Program Manager for these teams is Tony Norris who provided some info.

Phoenix 12 will be skippered by Hasso or Tina Plattner with Shane Elliott as Navigator, Tony Norris trimming downwind. Paul Willcox will trim the mainsail with Shaun Pammenter the aft grinder. 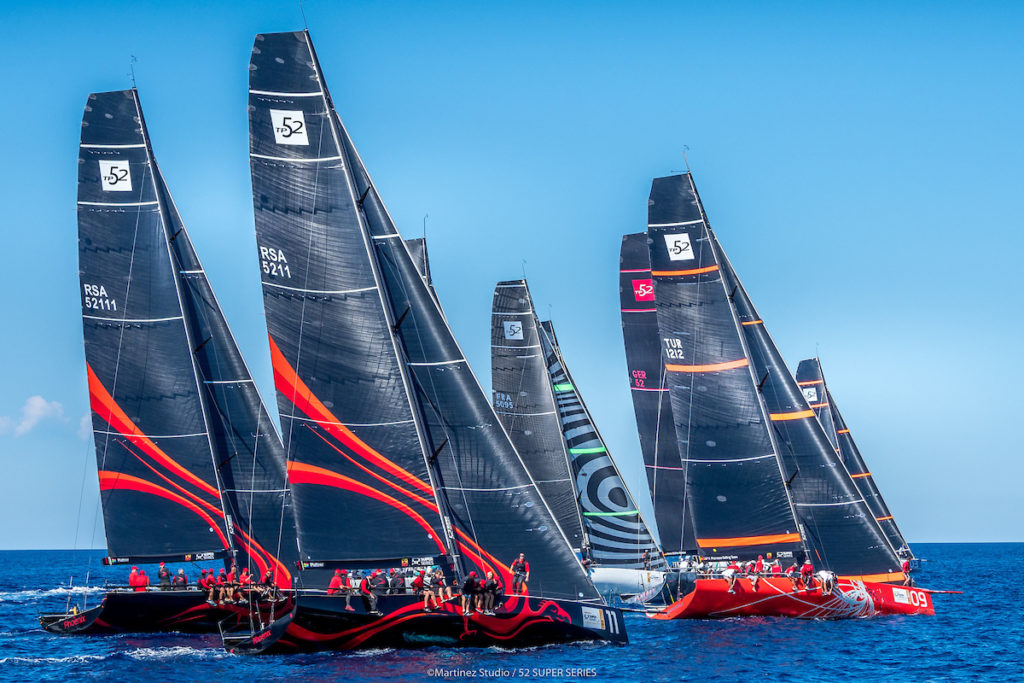 The Phoenix is skippered by Tina Plattner who has, as her navigator, Marc Lagesse.
Mark Sadler is on the runners with Matt Whitehead being a floating crew.

Ashore, James Largier is the Boat Captain with Time Marsh managing the shore crew. The Boat builder and rigger is Raymond Van de Linde who is assisted by Siya Vato.

‘Azzurra’, the team that finished strongest at the PalmaVela warm up regatta just over a week ago, proved they have a good grasp of what promises to be a challenging race course area when they led the official practice race on the eve of the Menorca 52 Super Series Sailing Week – the highly anticipated first regatta of the 2019 52 Super Series.

As is usual for the Italian-Argentine crew, superstition prevailed and even with a comfortable lead they made a small detour to miss the finish line, so adhering to their belief: “winning the practice race may jinx the regatta.”

The three-time 52 Super Series champions left the “victory” to Tony Langley’s ‘Gladiator’, which has double Dragon world champion Andy Beadsworth steering with – uniquely in this fleet at least – the owner calling the tactics. 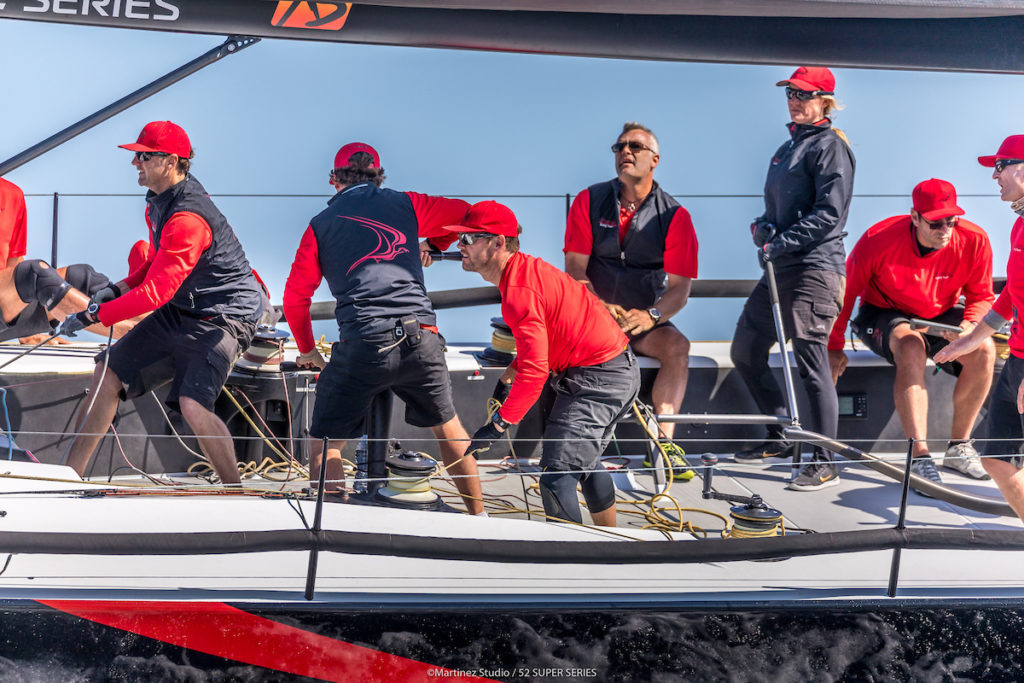 The race arena out from the Menorcan capital is one that carries many subtle changes, which can be difficult to read, hence it is rich in opportunities for any team to win at this first regatta of the season.

On this littler Balearic island there is less of a land mass and not as much high land to create the thermal effects than the larger, higher Mallorca enjoys (“Menorca” derives from Minor Ica meaning “smaller island”). With largely light winds expected this week, being able to string together a consistent set of scores will be key to getting the season off to the best possible start.

“There is always a lot of things going on here [on the race course]. It is quite a dynamic place. It is not big enough to really create much of a sea breeze and the Med is quite unstable at the moment.” explains Jules Salter, the 2008-9 Volvo Ocean Race winning navigator who joins the hotly-tipped German-flagged team on ‘Platoon’ this season. “There is a bit of current out there and the wind can wrap around either side of the island when the gradient wind is out of the north west. It could be very interesting.”

“We have to interpret the different forecasts correctly and try and see the patterns and the trends and really keep looking out the boat. But it looks like a light week. It will be different. We are happy in most conditions and some of the teams have changed their boats quite a bit so it will be interesting,” concludes Salter.

“There is not a pattern here. You really have to predict what is going to happen. It is all about the gradient wind, not much about the effects in the corners and the thermal effects. It is very, very, very hard to predict,” says Argentinian gold medallist Santi Lange, the tactician on ‘Azzurra’.

“It is challenging, but that gives plenty of opportunities,” says Juan Vila, the ace Spanish navigator who this season returns to the 2018 champions ‘Quantum Racing’ after a Volvo Ocean Race on ‘Mapfre’. “The flow just now is westerly and so we are pretty much in the lee of the island so the puffs might come from one side or another.” Vila observes, “We feel pretty good. We have had good practice in Valencia and Palma and a few days here and we are still working on just being up to the level of communication that this boat is used to but we are getting here.”

“That is a plus,” says project manager Alberto Barovier. “Sime is a super sailor with a gold medal, and we are happy about that. Obviously our expectations are high, we have all the tools now to do the job. We want the best for the team and Vladimir makes sure what we do is best for the team, we want to see Gazprom Sailing Team Bronensec at the top of the leaderboard. The boat is really fine and is going well. We are happy with the speed of the boat. Now it can only be faster, we have plenty of margin to get faster.” 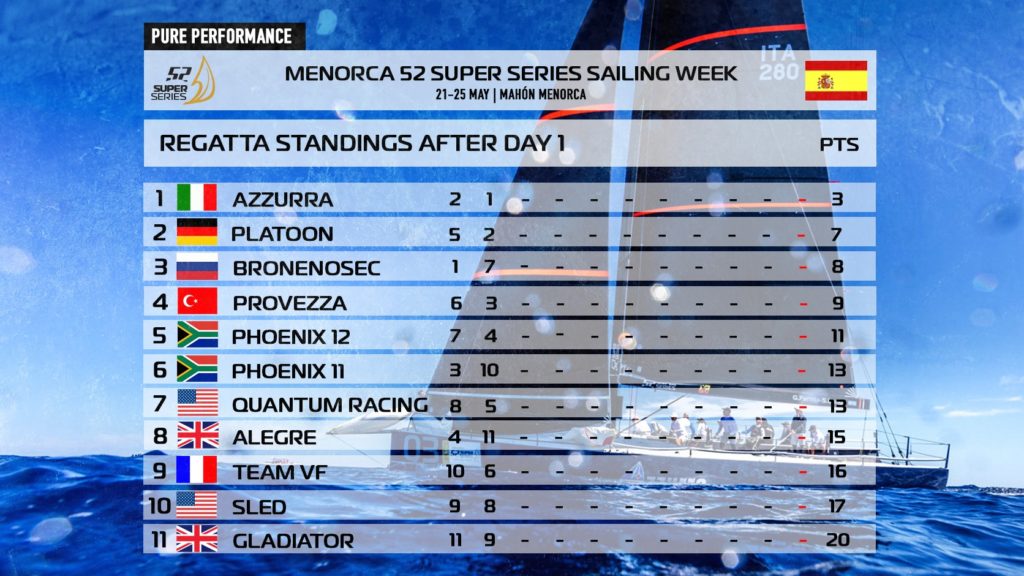