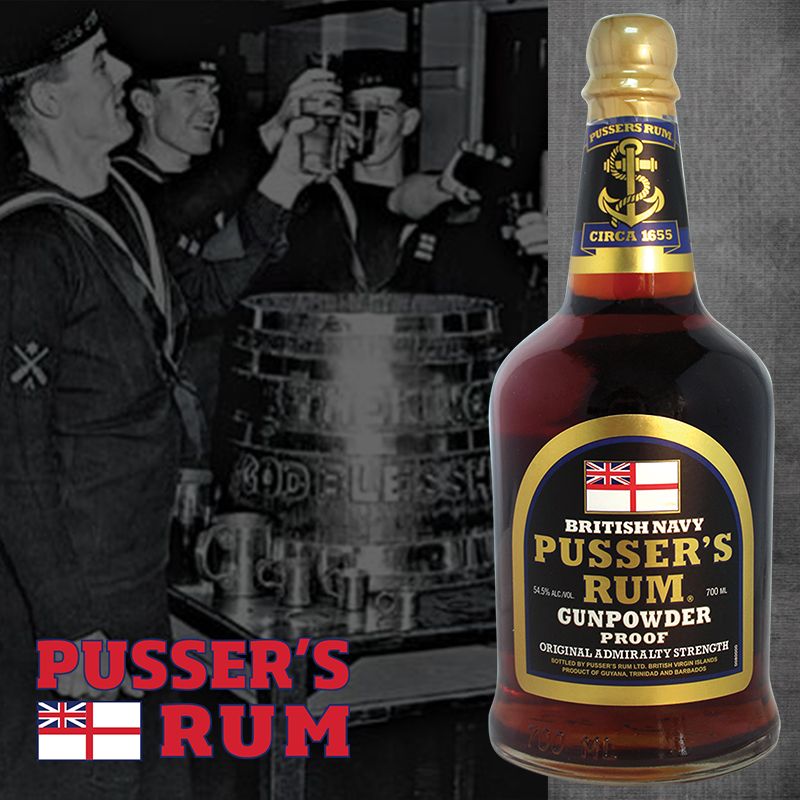 So what you may say, but for those of us who enjoy a good rum, we go down in sympathy with all those Royal Navy sailors who were deprived of their daily rum ration 50 years ago today.

So I will be having a QLD (quiet little drink) this evening around 17h30 (SAST – Friday 31 July) in remembrance of that dastardly deed. My bottle of Pussers Gunpowder, kept for very special occasions, will be brought out.

So please join me on Facebook – I will post a pic of my Pussers drink for the evening, and urge you all to follow suite, plus add some ribald comments – or whatever! Make a rum cocktail, drink it neat as the old sea dogs did, or simply enjoy in whatever way tickles your fancy! See you then – and don’t forget the toast: The Queen – God Bless Her.

For those who need some background, I unashamedly reprint the info on Black Tot Day from the Pussers website.

Since the Days of Wooden Ships and Iron Men
To prepare for a face off, the iron men in their wooden ships found both revival and salvation in Pusser’s Rum, as well as companionship for downtime reverie. From the earliest days of the Royal Navy, these foolhardy brave hearts were issued a daily ration or “tot” of rum by the ship’s “Purser,” a word the sailors later coined as “Pusser”.

This rum tradition rewarded heroism and eased defeat from 1655 until 1970 when some of the higher-ups decided rum was having too much fun with the sailing men. Blame it on the above deck skirmishes or the below deck antics, or simply sea legs getting the better of the jolly Jack Tars. We like to think the Royal Navy just wanted to keep the sea’s best kept secret – and best tasting one – to themselves.

Black Tot Day
The history of rum in the Royal Navy was largely that of social change, both in Great Britain and the Royal Navy. From 1650 throughout the 18th century, shipboard life was incredibly difficult. The daily issue of Pusser’s Rum was the highlight of the day. In those days, battles were fought “eyeball-to-eyeball.” The mental alertness and courage required to pack a cannonball into a muzzleloader were far different from that required to operate the modern weapon systems of today. Thus in 1970, the Admiralty Board decreed that there was no place for the daily issue of rum in a modern navy, and so ended the daily issue of Pusser’s Rum in the Royal Navy on July 31st, 1970. This date since then is referred to as Black Tot Day.

The rum issue, one of the longest and unbroken traditions in seafaring history, ended as the last tot of Pusser’s was drunk on board Their Majesties Ships. “Round the world” in every ship of the Navy, glasses were raised in their final salute. “The Queen!” they said, and it’s no exaggeration to say that at that moment, many a strong man shed a tear at the passing of a tradition so old and fine, that was to be no more.

“Splice the Main Brace!”
The great sailing ships were propelled only by the wind in their sails which were attached to spars called yards. The lines to trim the sails were called braces and ran from the ends of the yards to the deck. The main brace was the largest and heaviest of all the rigging being up to 20″ diameter on the big ships. To splice it was one of the most difficult tasks on board ship. Sometimes in the heat of battle, the braces were shot away making the ship unmanageable. To those that “Spliced the Main Brace”, went a double issue of rum.

What is Grog?
This most traditional of all rum drinks is a rich part of the early history of Pusser’s Rum. There was an Admiral by the name of Vernon who was the hero of the Battle of Porto Bello and the Commander-in-Chief, West Indies Station, the prime area for Spanish trade in the Caribbean. He had selected Porto Bello for attack because he learned that a large assignment of gold and silver had been sent there from Panama. The remarkable sequel, which followed the town’s capture, was Vernon’s decision that all public money found was to be divided fairly as prize money among those British crews which took part in the engagement. This was a brave step, in defiance of the regulations, but general delight at home in England over the victory caused it to be overlooked. No act could have done more to win the sailors’ hearts that on most occasions received nothing. The men had affectionately nicknamed Vernon Old Grog on account of the old grogram cloak (a rough hewn fabric of mohair and silk) that he often wore when the weather was bad.

In Vernon’s time, the men received one-half pint of rum a day which they drank neat, that is without water. Thus there was a lot of drunkenness and disobedience on board for which many of the men were brutally disciplined. He was much concerned with what he called, “the swinish vice of drunkenness”. He believed that if the rum was diluted with water that its effects on the senses would be reduced – even though the men were to receive the same amount of rum. Thus Admiral Vernon issued his Order to Captains No. 349 on August 21, 1740. His order refers to the “unanimous opinion of both Captains and Surgeons that the pernicious custom of the seaman drinking their allowance of rum in drams, and often at once, is attended with many fatal effects to their morals as well as their health … besides the ill consequences of stupifying [sic] their rational qualities … You are hereby required and directed … that the respective daily allowance … be every day mixed with the proportion of a quart of water to a half pint of rum, to be mixed in a scuttled butt kept for that purpose, and to be done upon the deck, and in the presence of the Lieutenant of the Watch who is to take particular care to see that the men are not defrauded in having their full allowance of rum… and let those that are good husbanders receive extra lime juice and sugar that it be made more palatable to them.”

The men were incensed that he should have ordered that their rum be diluted, and named it contemptuously grog from the name they had given him. Thus real grog is Pusser’s Rum with water, limejuice and brown cane sugar. Unwittingly, Vernon had created the world’s first cocktail – grog!

Sailors had a way of embellishing their surroundings during their long stints at sea. The scuttled butt in Vernon’s orders was a simple cask with a lid. Soon after he issued his orders, the entire British Fleet adopted his procedures for watering the rum. Eventually, the scuttled butt gave way to the Grog Tub, an oak cask banded with polished brass or copper hoops and covered with a fancy lid. On the side of the cask were the brass letters THE KING GOD BLESS HIM, the daily toast at noon when the rum or grog were issued. The grog tub was naturally the daily gathering place. While the men stood in line for their grog, rumours were exchanged so that in time the word scuttlebutt became synonymous with the word gossip.

Liquid History
Rum and the sea are inseparable, and no rum is more akin to the sea or sailors than Pusser’s Rum – the Original Navy Rum.

AWARD WINNING RUM
Deemed the ‘Single Malt of Rum’ by Forbes Magazine, read all about this very fine rum HERE