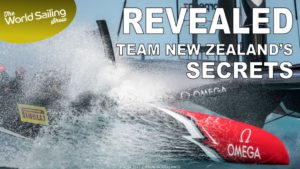 Here’s what’s new in this show:
• Crossing the Atlantic the hard (mad) way
• Team New Zealand’s secrets revealed
• Peter Burling profile – Sailing’s new rock star
• How to get aboard a Cup boat during racing
• Para World Sailing Championships
• How the Round the Isle of Wight record was broken

In Brief
The secrets behind Team New Zealand’s success. This month the World Sailing Show finds out why the Kiwis were so much faster than Oracle Team USA. Plus, new technology that gets you on board for the racing.

A gutsy way to set a Transatlantic record, 2,500 miles across an ocean aboard a 6m long, open decked racing cat.
We also report from the Para World Sailing Championships in Germany and see how the Round the Isle of Wight record was broken.

Features
Crossing the Atlantic the hard (mad) way.
There are many different ways to cross the Atlantic and there are plenty of records set doing it. But one crew took the challenge to the extreme.
Father and son team, 56 year old Vittorio Malingri and 26 year old Nico have a wealth of offshore experience from circumnavigations to numerous Atlantic crossings. But both knew that this task would be a big one, racing 2,500 nautical miles from Dakar to Guadeloupe aboard an open decked F20 racing catamaran.
Just 6m long with no cabin, the pair would need to live on deck for nearly two weeks.
For most, simply making it to the other side would be a major achievement.
But the Malingris were out to break a record.

Team New Zealand’s secrets revealed.
When it came to the crunch the Defenders of the America’s Cup took a pasting.
There are few other ways to describe it. And after 14 years, the Cup was heading back to Auckland.
Outpaced and outmanoeuvred, Emirates Team New Zealand ran circles around Oracle Team USA. The Kiwis were faster, sailed deeper downwind and higher upwind. They tacked in a heartbeat and rarely slipped off their foils.
So how come they were so much quicker? What was the difference between the two boats? And what about their helmsman, Peter Burling, what makes him tick?
We find out.

Peter Burling profile – the sailing world’s new rock star.
Cool, calm, collected the eight time world champion and double Olympic medallist is now the youngest ever helmsman to win the America’s Cup. What is it that makes Peter Burling tick? We ask those who know him well.

How to get aboard a Cup boat during racing.
A new application for virtual can take viewers aboard a Cup boat to see exactly what goes on during the race. Commentator Stevie Morrison rode aboard both the Kiwi and American boats during the America’s Cup to discover some of the teams’ secrets.

The annual Round the Island Race attracted more than 1300 entries. Some had their eyes on the silverware, some were simply there to take part, but one team was in a hurry, Concise 10. Skippered by Ned Collier Wakefield, the crew of the 70ft trimaran were out to set a new record.