The South Atlantic Race. How It Was Proposed 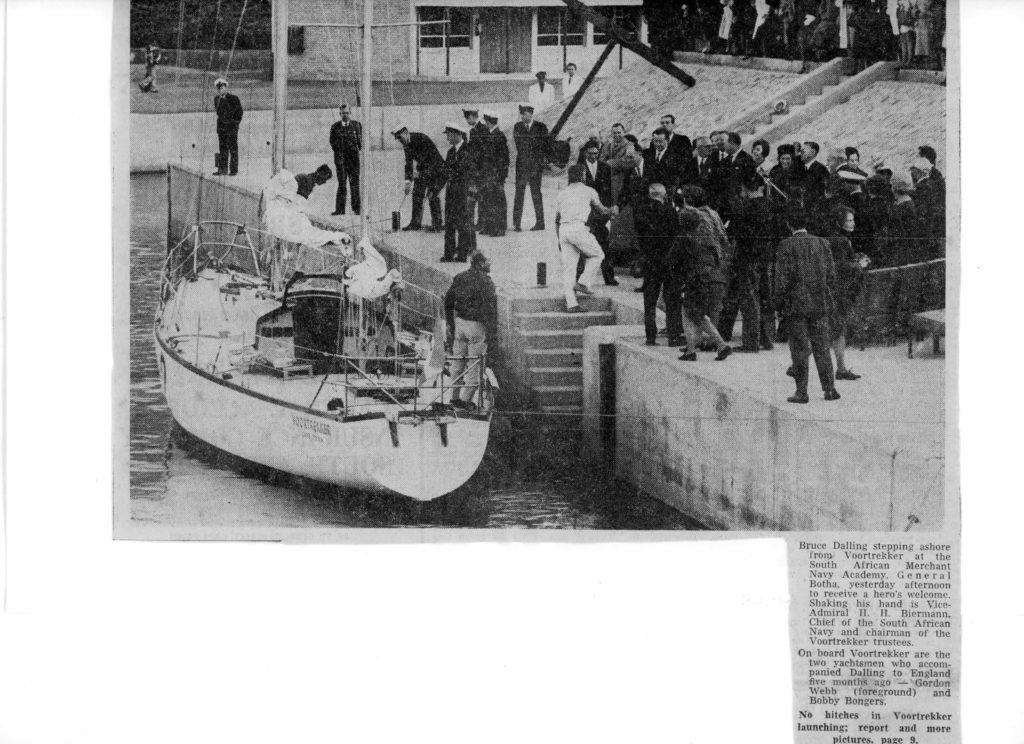 Ever wondered how this race to Rio was established?

Well here’s the answer – and you had better believe it as despite this being an undated newspaper cutting, it was loooong before the days of fake news.

The race was proposed by Admiral H H Biermann, Chief of the South African Navy, when he and many other dignitaries welcomed Bruce Dalling home after his highly successful OSTAR race in 1968.

It makes for interesting reading, and was the creation of one of the longest trans-ocean races in the world at the time – if not the longest!

Of course it was the 1971 Cape to Rio Race, and it literally blew the wind out of many sails when an entry of 58 boats was received when just 15 were expected. Plus it attracted many international competitors, and an event which created the boom in home-built yachts in this country.

It’s an event we should be immensely proud of.

As these cuttings can be difficult to read, here is a full transcript:

“We should start thinking of such a race,” he said, “which could be from Cape Town to South America – or to Australia.

“We could attract the best yachtsmen in the world, and we hope the public of South Africa will come to the fore in enabling us to launch schemes such as this, in the same way they have done in the Voortrekker venture.” 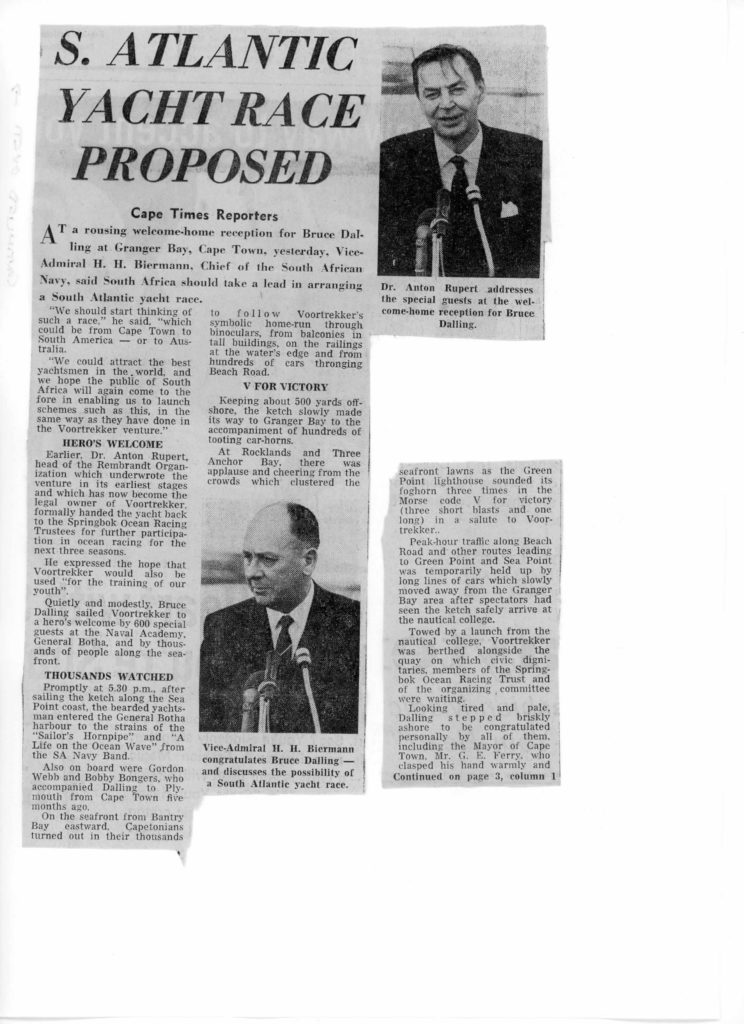 This undated two-part newspaper cutting tells how the South Atlantic Race was established.
For easier reading a full transcript of this is included as text within this article.

HERO’S WELCOME
Earlier, Dr. Anton Rupert, head of the Rembrandt Organization which underwrote the venture in its earliest stages and which has now become the legal owner of Voortrekker, formally handed the yacht back to the Springbok Ocean Racing Trustees for further participation in ocean racing for the next three seasons.

He expressed the hope that Voortrekker would also be used “for the training of our youth”.

Quietly and modestly, Bruce Dalling sailed Voortrekker to a hero’s welcome by 600 special guests at the Naval Academy, General Botha, and by thousands of people along the seafront.

THOUSANDS WATCHED
Promptly at 5.30 p.m., after sailing the ketch along the Sea Point coast, the bearded yachtsman entered the General Botha harbour to the strains of the “Sailor’s Hornpipe” and “A Life on the Ocean Wave”; from the SA Navy Band.

Also on board were Gordon Webb and Bobby Bongers, who accompanied Dalling to Plymouth from Cape Town five months ago.

On the seafront from Bantry Bay eastward, Capetonians turned out in their thousands to follow Voortrekker’s symbolic home-run through binoculars, from balconies in tall buildings, on the railings at the water’s edge and from hundreds of cars thronging Beach Road.

V FOR VICTORY
Keeping about 500 yards offshore, the ketch slowly made its way to Granger Bay to the accompaniment of hundreds of tooting car-horns.

At Rocklands and Three Anchor Bay, there was applause and cheering from the crowds which clustered the seafront lawns as the Green Point lighthouse sounded its foghorn three times in Morse code V for victory (three short blasts and one long) in a salute to Voortrekker.

Peak-hour traffic along Beach Road and other routes leading to Green Point and Sea Point was temporarily held up by long lines of cars which slowly moved away from the Granger Bay area after spectators had seen the ketch safely arrive at the nautical college.

Towed by a launch from the nautical college, Voortrekker was berthed alongside the quay on which civic dignitaries, members of the Springbok Ocean Racing Trust, and of the organizing committee were waiting.

Looking tired and pale, Dalling stepped briskly ashore to be congratulated personally by all of them, including the Mayor of Cape Town, Mr. G. E. Ferry, who clasped his hand warmly and ….

(Regrettably the balance of this report is missing)

*This cutting is part of an extensive historical record of sailing in this country which I hold in my archives.