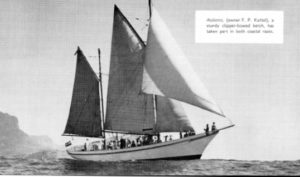 This is the title of an article in the very first SA Yachting magazine dated October/November 1957.

It’s an interesting article for many different reasons.

• It mentions the ocean race from Simonstown to Port Elizabeth at the end of 1956. This was organised by the Cruising Association of South Africa (CASA) in conjunction with he Royal Cape Yacht Club (RCYC).

• That race was a follow-on to the Simonstown to Mossel Bay race held the year before.

• It talks about the items of gear that competing yachts were to carry – described as ‘items of gear not usually carried’ and being in line with the those insisted on by the Royal Ocean Racing Club.

• It talks about handicapping