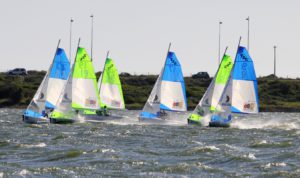 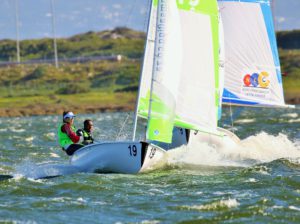 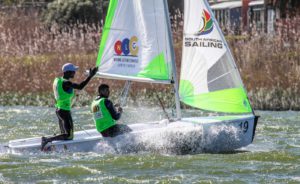 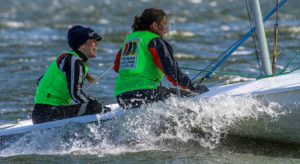 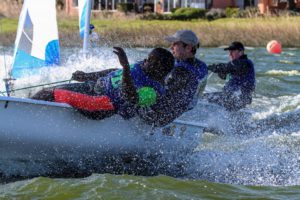 The national Team Sailing League’s (TSL) first event produced a day of thrilling head-to-head racing at the Milnerton Aquatic Club.
In a display of competitive sailing at its most exciting, teams from across the country battled it out in windy conditions for top honours in four separate categories. Each team consisted of three sailing dinghies, each crewed by two people.

KwaZulu-Natal proved to be the strongest team of the day, winning both the Youth and Open sections while the home team, the Western Cape, claimed top honours in the Women’s section.

Joining in the day of fun were two-time Olympians Asenathi Jim and Roger Hudson who were part of a ‘Rockstars’ team. While he may have graced several sailing podiums around the world, this was a first for Jim.
“Funnily enough this was my first team race ever,” he admitted. “It’s very different because you’re not only focussing on what you’re doing as a team in the boat, but you’re focussed on your teammates in the other boats. It was interesting. As a sportsman you live and learn, so it was fun.”

Hudson, whose team of six sailors claimed the best-of-five win against Jim’s team in the “Rockstars” section, was equally enthusiastic about the day’s racing. “We had two really strong teams in the exhibition match. We managed to win 3-1, but most of all it was about being able to showcase what team racing is all about, and I think from that perspective it worked really well.

“We saw that the new boat – the TSL14 – that SA Sailing (SAS) has put together is a really good product for team racing, and it definitely has achieved its goal. It was exciting for spectators as there was a lot of wind. It was a super-exciting day and I’m very happy to have been a part of it.”

Tammy Holden, a member of the winning women’s Western Cape team, was also thrilled to have been part of the launch. “It was so much fun, but kind of hectic because of the adrenaline you get through you racing against other boats and trying to get your teammates through, and then trying to block the other team’s boats,” she explained.

Describing what head-to-head team sailing is like, as opposed to regular fleet sailing, Holden added: “It’s a mental chess game that you’re playing constantly, and then you have to keep your body working to force the boat forward. So you need to be fit enough to be able to think and then also to control the boat in those conditions. Team racing is a completely different aspect of the sport which is fun.”

Chairman of SA Sailing Peter Hall was delighted with the day’s proceedings. “There were clearly a lot of excited sailors. The concept is something everybody is very excited about, and I think it’ll go back to the regions and grow from there. I’m also hugely excited about the demographic mix we’ve got – both male and female and the black-white mix which is very important to our transformation programme. So now it’s really about rolling this out to the rest of the country and growing it from here.

“We’ve had a chat to two representatives from the National Lotteries Commission, who have been a big contributor to the programme and they’re very excited about the concept too,” added Hall.

SA Sailing CEO Greg Smith added: “For me, the thing from today was that we had sailors of multiple skill levels all on the water at the same time – all able to compete, all able to have fun, and the boats held up well too. It was definitely a great launch and we have plenty of enthusiastic people going back to the regions to go and launch this there. It’s been a good day for us.”