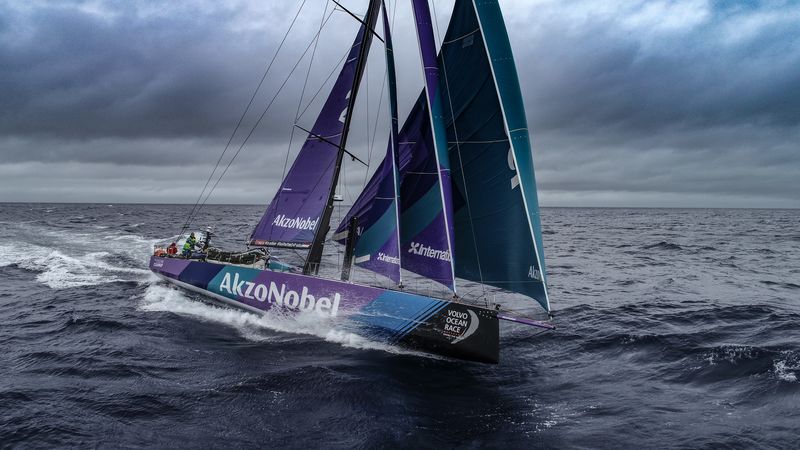 Team Akzonobel has become the first crew in Volvo Ocean Race history to exceed 600 nautical miles (1,111 kilometres) in a 24-hour period during Leg 9 across the Atlantic from the United States to the United Kingdom.

Not satisfied with that achievement the team pushed their boat and themselves even harder as they chased down first Ericsson 4’s record and then the mythical 600nm threshold. 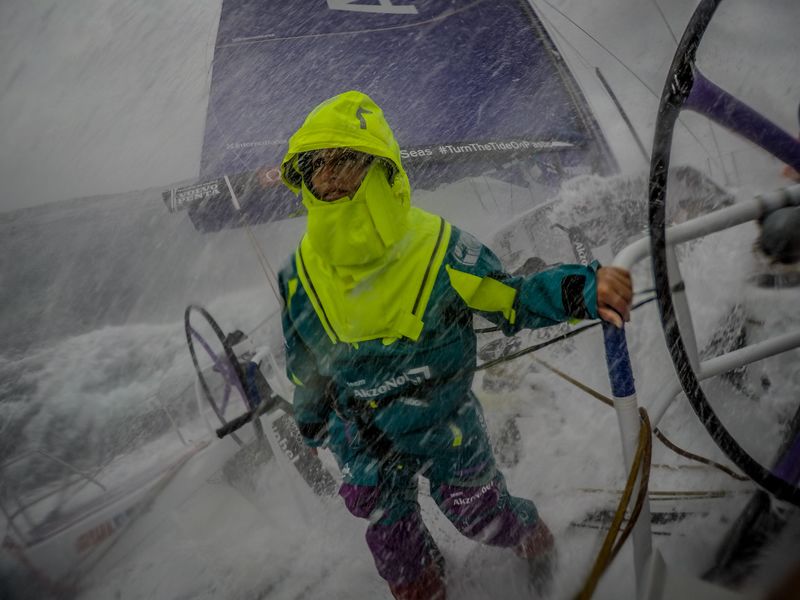 Martine Grael turns her back on the stinging sea spray during team AkzoNobel’s record setting 24-hour run on Leg 9 of the Volvo Ocean Race.
Pic by Konrad Frost/Volvo Ocean Race

Back then, Ericsson 4’s record run was masterminded by Brazilian skipper Torben Grael (the father of team AkzoNobel helmsman and trimmer and Olympic gold medallist Martine Grael) and his navigator Jules Salter (GBR), who fulfils the same role today on team AkzoNobel.

Despite having become the fastest ever sailors in Volvo Ocean Race history the team AkzoNobel crew were not finished with record breaking and reset their sights on a 600nm plus 24-hour run. 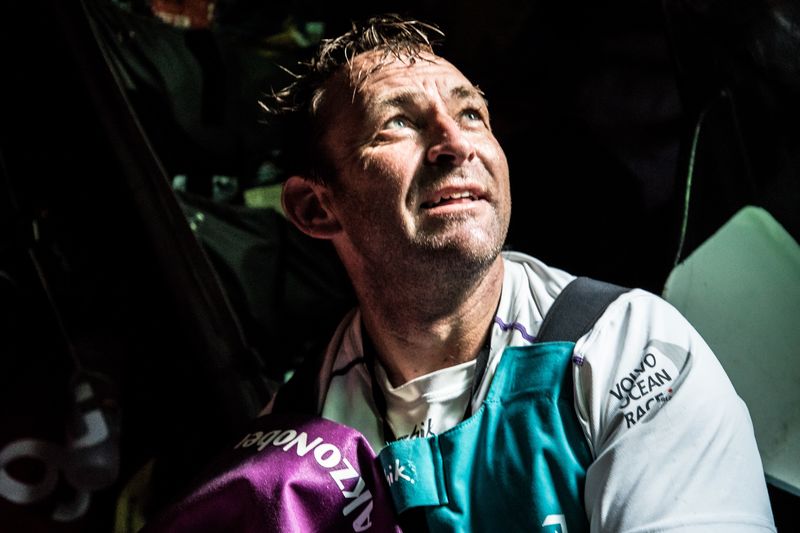 Reflecting on the crew’s achievement, Salter – who precisely positioned the boat in a narrow band of Gulf Stream current that gave it an extra three-knot push at times – admitted to being quietly delighted to have broken his own record 24-hour distance 10-years on.

“In the 2008 race we almost topped 600 miles on Ericsson 4,” Salter recalled from his cramped seat at the navigation station on board team AkzoNobel.

“That was in the South Atlantic on the first leg. It wasn’t such a straight forward run – we did a few sail changes and not such a direct straight course – but this is really good what we have done here.

“We have been helped by a good bit of Gulf Stream on this one, but everyone has sailed the boat harder than we have sailed it before. That is the most important thing: what the crew do and how hard they sail it – and that the boat has stayed in one piece.”

Team AkzoNobel skipper Simeon Tienpont (NED) said the whole crew was buzzing with adrenaline after several days of high speed sailing leading up to the record.

“For sure Martine is excited – she can now call her father ‘Captain Slow’ at the dinner table,” Tienpont joked. “Also, Jules has a nice grin on his face to break his own record.” 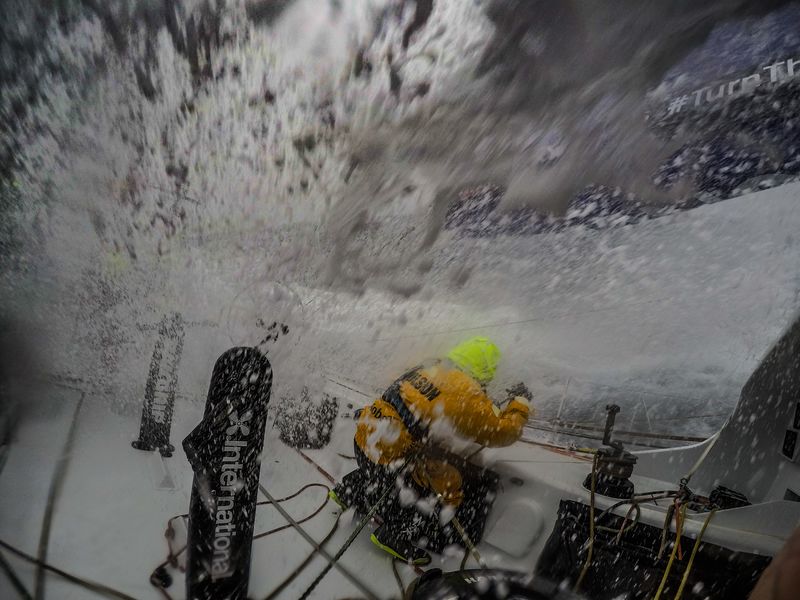 Chris Nicholson (AUS) braces in anticipation of a huge breaking wave as he adjusts the sail trim on team AjkzoNobel during the crew’s record setting 24-hour run.
pic by Konrad Frost/Volvo Ocean Race

Watch captain Chris Nicholson (AUS) said he had not previously believed a 600nm plus run was on the cards and paid tribute to the collective effort from the sailors and shore crew that had made it possible.

“Unbelievable – we cracked 600 nautical miles,” said Nicholson. “That’s probably more than you drive your car in a day on a long trip without having a sleep.

“Everything has to align perfectly to bust a record at this level – the whole team from the top down: management, shore crew, everybody on board. What an effort, I’m just so happy for the whole team. Good work everyone.”

Team AkzoNobel’s blistering performance also carried them into the lead on Leg 9 – an eight-day transatlantic sprint from Newport, RI to Cardiff, Wales. The crew will now put their record celebrations on hold as they prepare to defend their lead over the final stage of Leg 9 into Cardiff.

Wind conditions for this final section are expected to be much lighter and less predictable and the team AkzoNobel sailors know they need to be at their very best to hold off the inevitable challenge from behind.