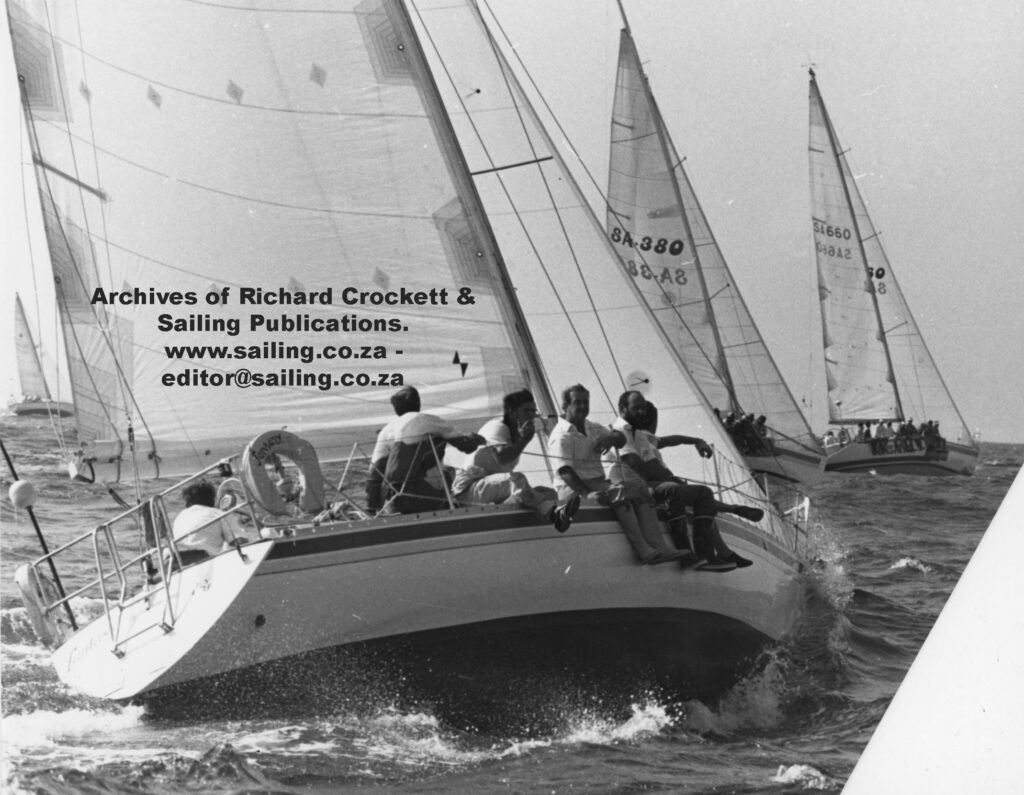 1984 Vasco. Fantasy heading out from the start and looking good.

There’s no real theme to make from these other than the people and boats you see are an elite group of sailors who toughed it out on the race. Some went all the way and finished while others limped home – all being as tough as old sea boots as they raced down the Wild Coast of the South African east coast – and never knowing what Aeolus would throw at them on the way.

Those early days were tough – no real weather forecasts of any consequence to rely on, only synoptic charts to study (if you were clever enough to know what they meant), and NO GPS, just DR and an RDF (radio direction finder).

This is a tough race for tough sailors.

Enjoy the pics and please share names of those who are unknown so that the records can be completed. And COMMENTS are always welcome too. 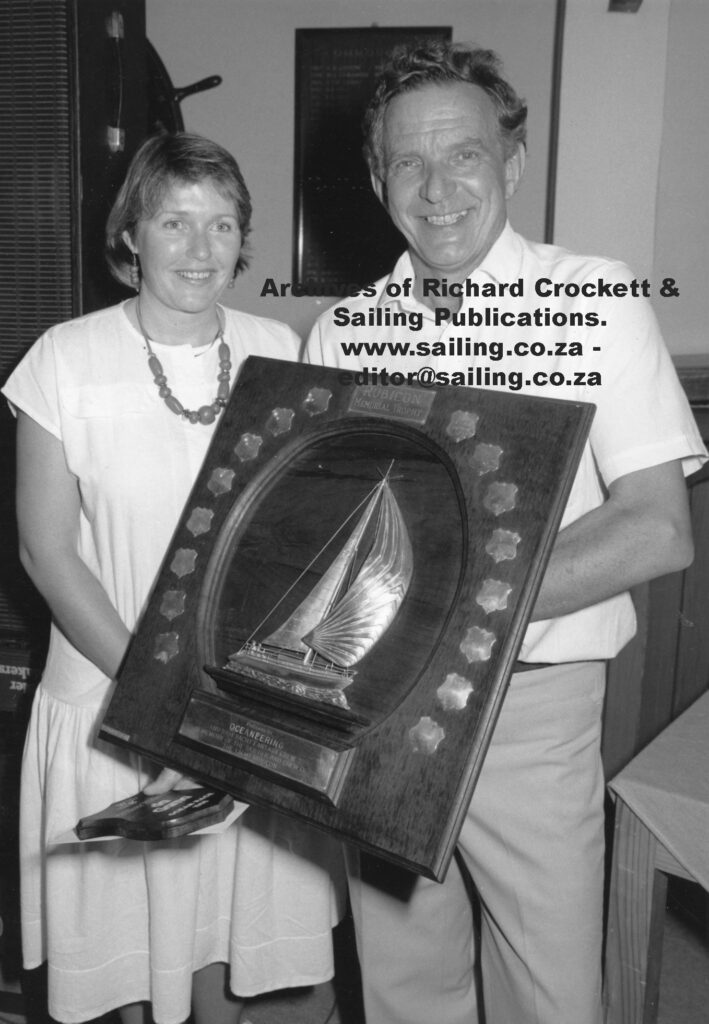 Mac Vosloo together with Carol King showing off the Rubicon trophy. This may well have been in 1985, the first year the trophy was awarded. 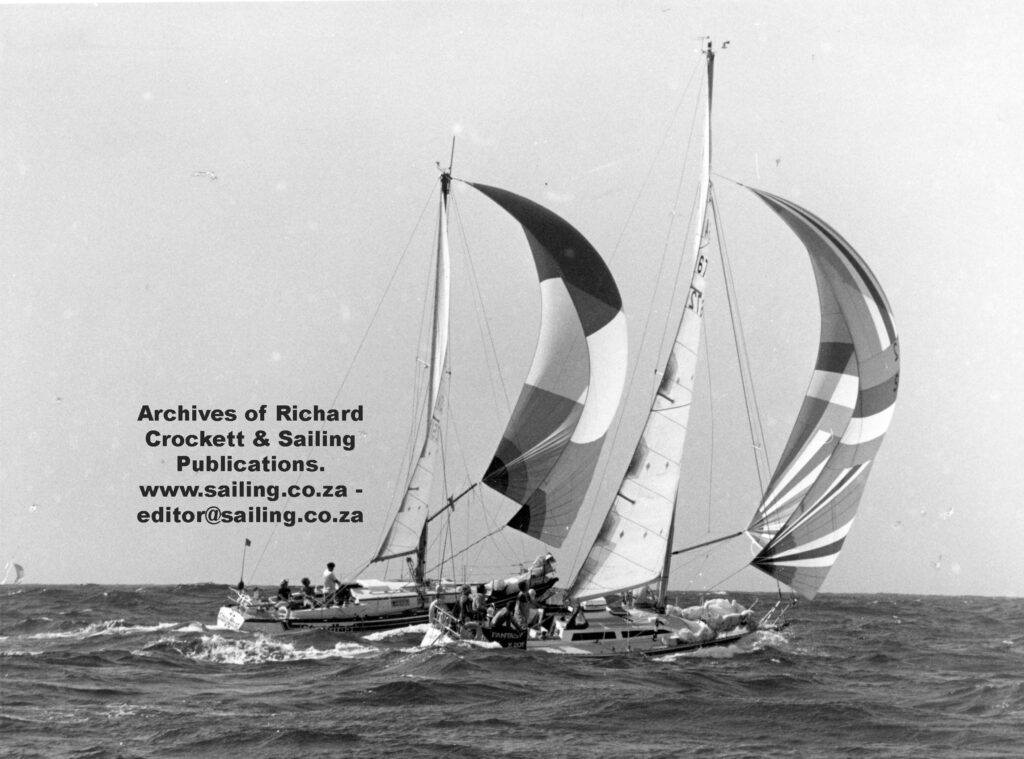 1984 Vasco. Fantasy and Standfast head towards East London in a 20 knot north-easter.
pic by Mike Rushworth 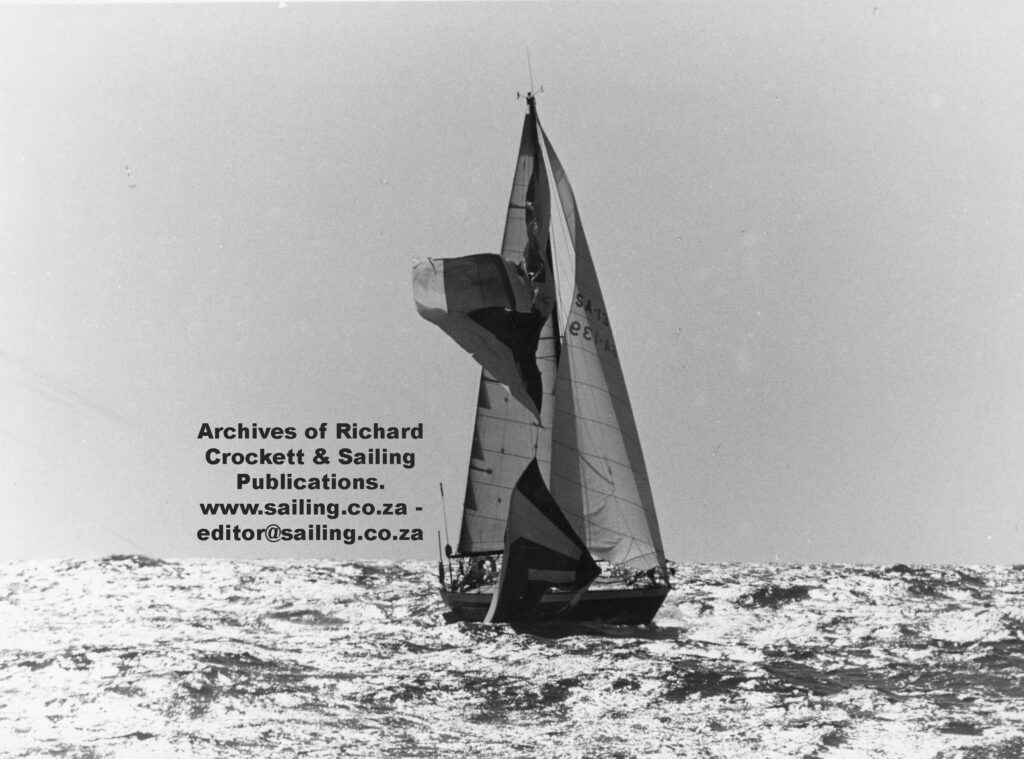 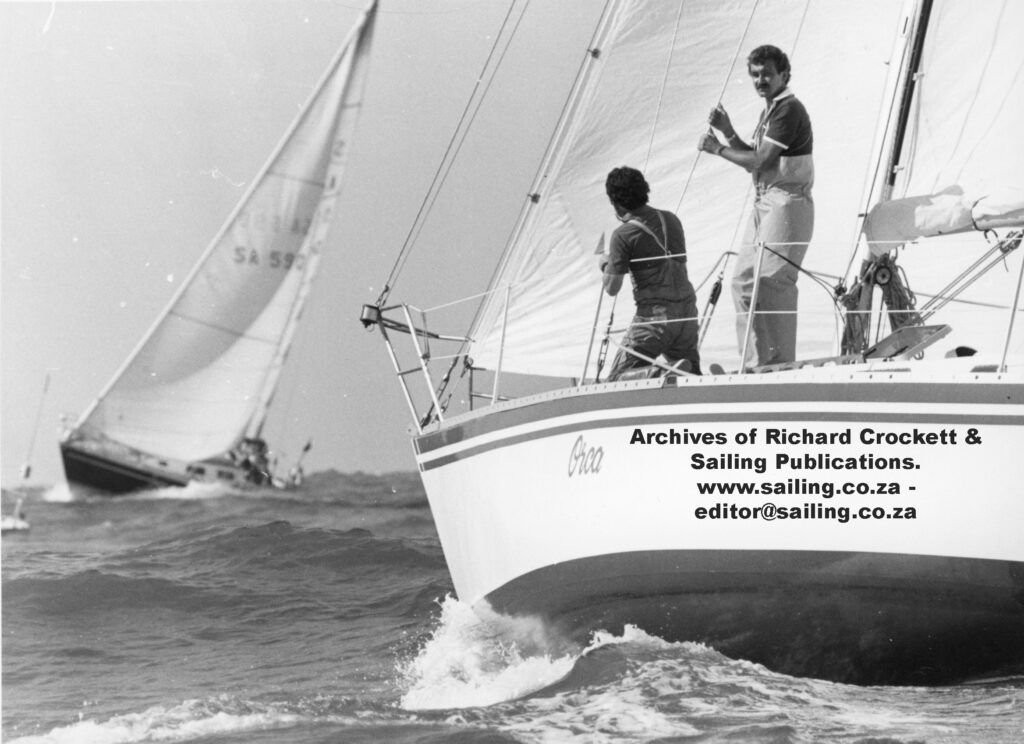 1984 Vasco. Orca coming up to the start of the 1984 Vasco. On the foredeck are John Elliot and Mike Rushworth (standing). 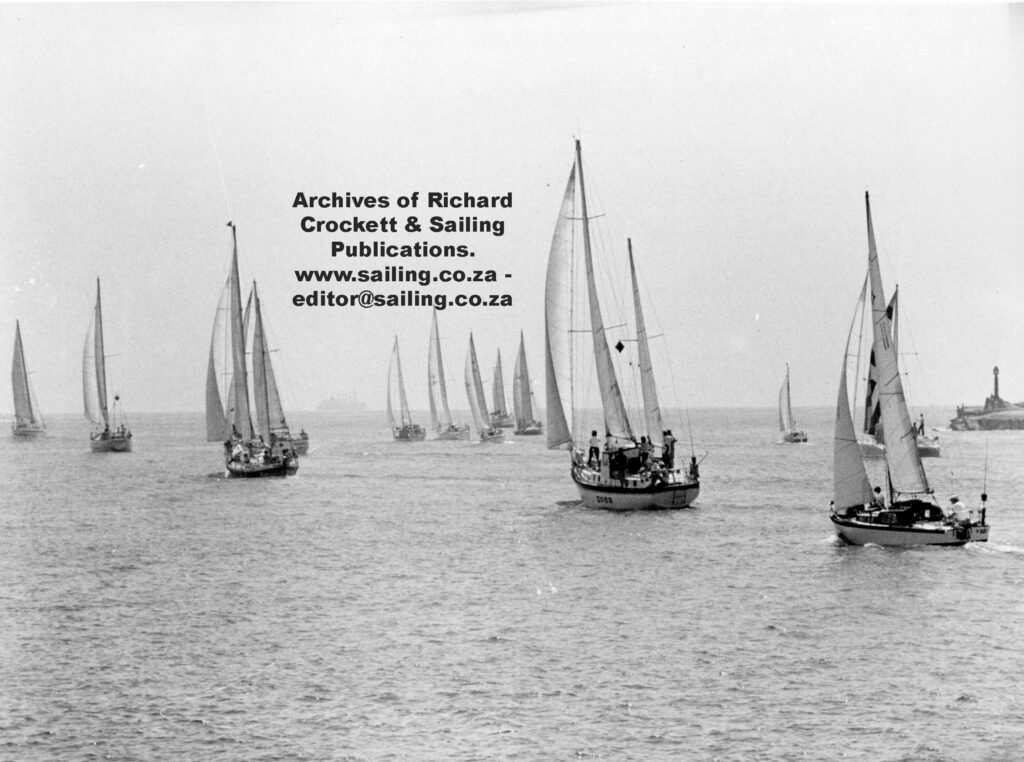 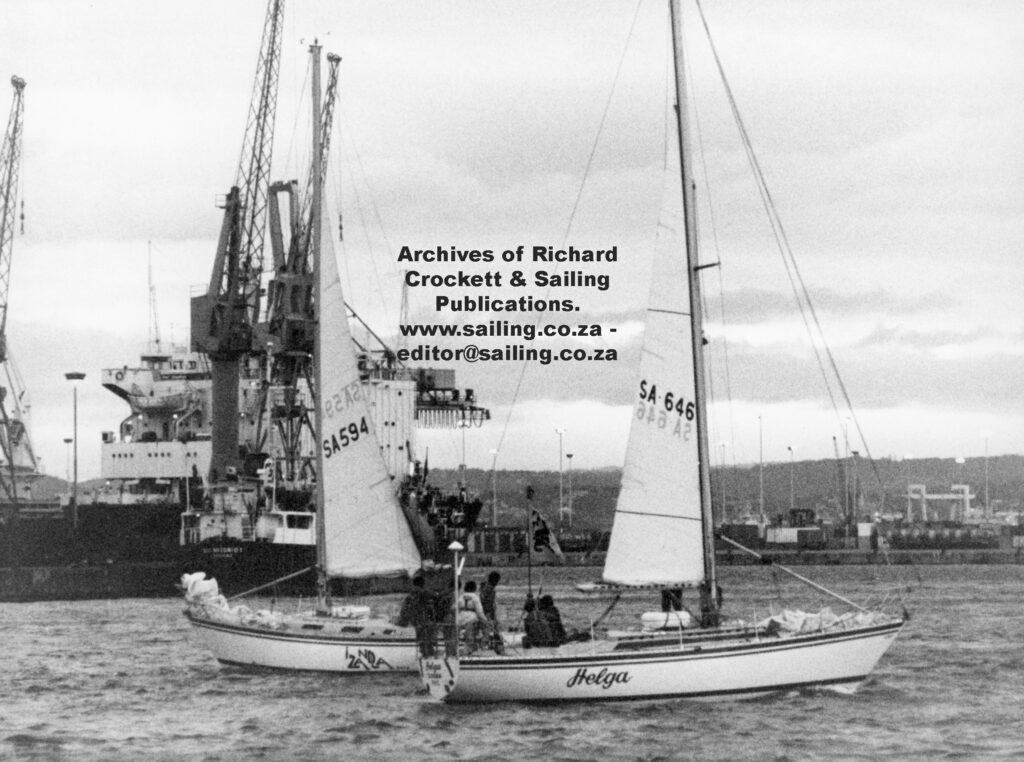 Vasco. Yachts waiting to leave Durban harbour for the start. Note that all crew are kitted out in full No. 1s due to the inclement weather. 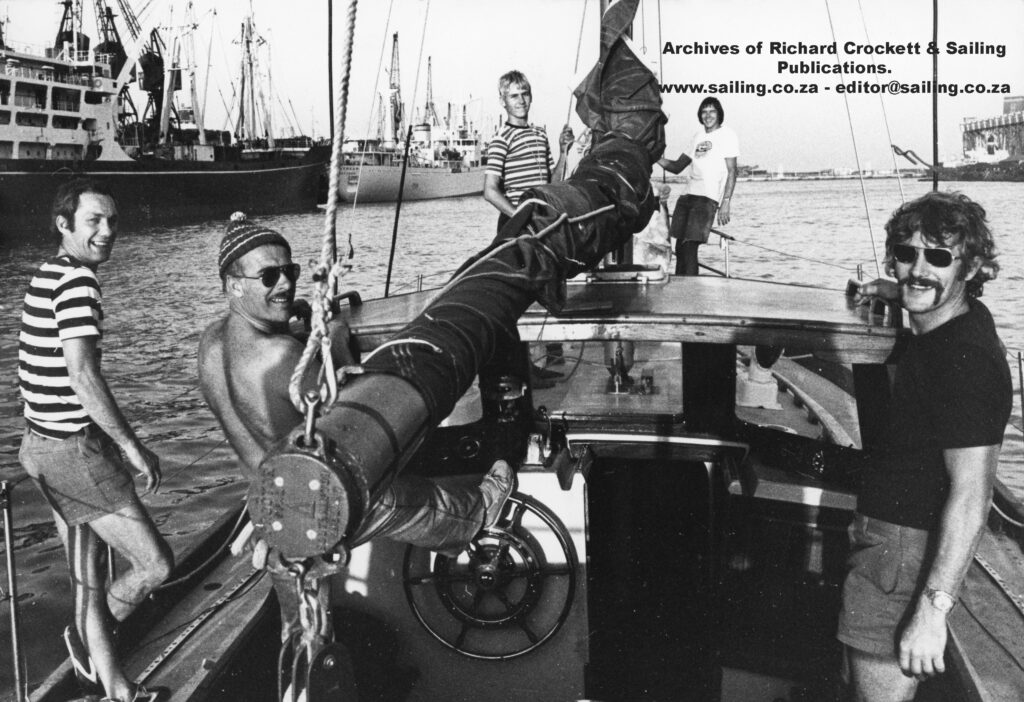 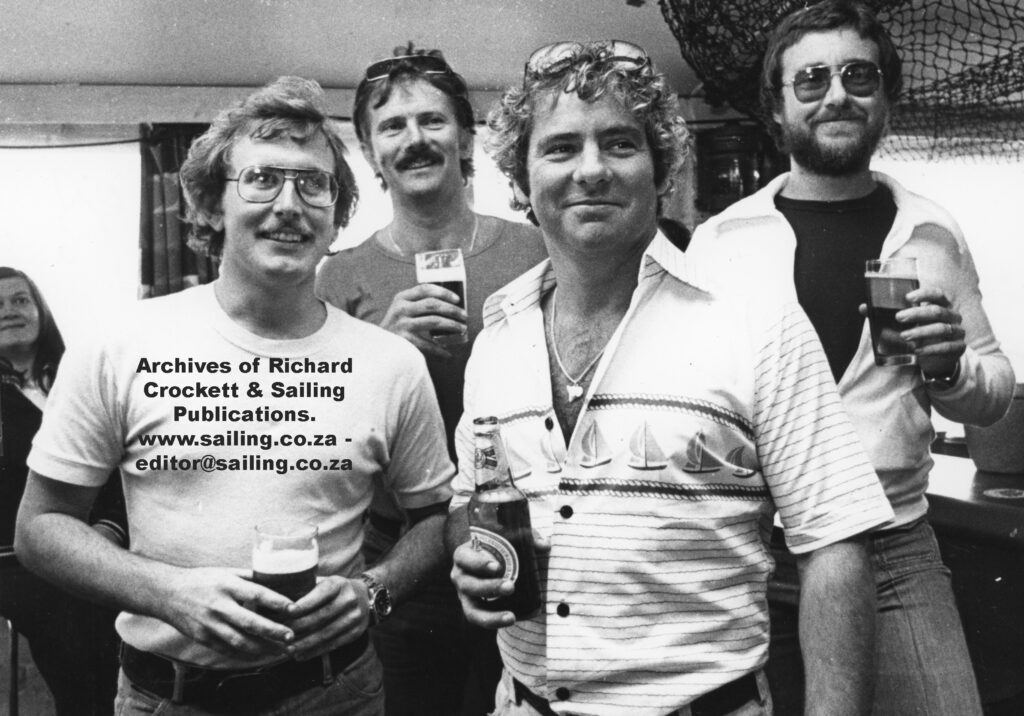 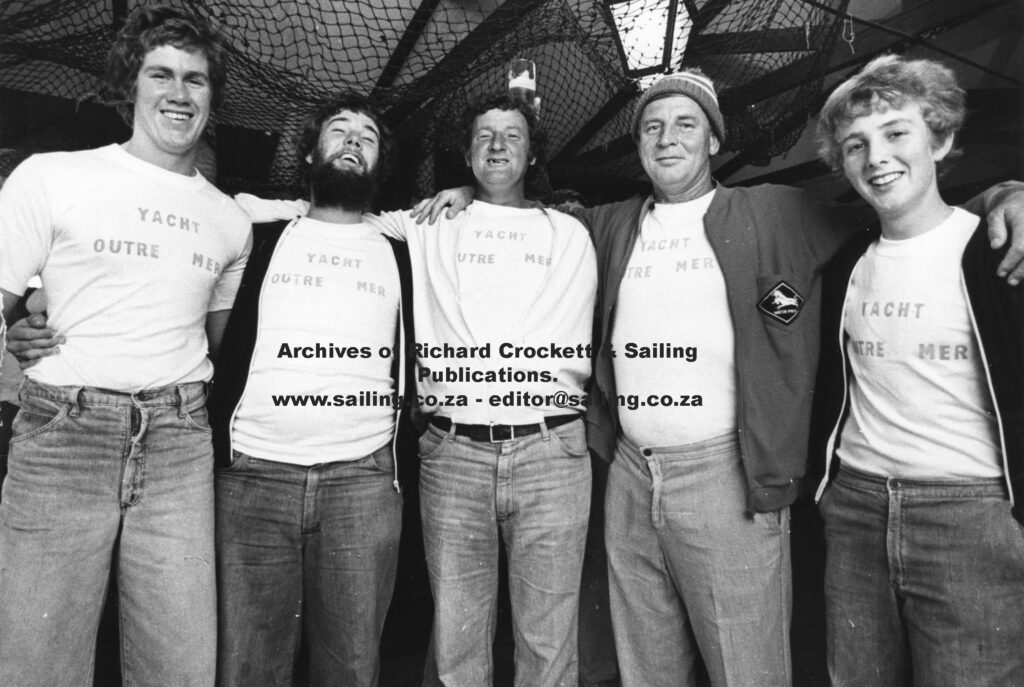 1977 Vasco. The crew of Outre Mer – founders of the race to East London in 1977 when just four yachts entered.
L-R. Howard Fairbank; Richard Crockett; John Swain; Brian Tocknell & Neil Tocknell who was a very young schoolboy at the time.
pic by Mike Rushworth 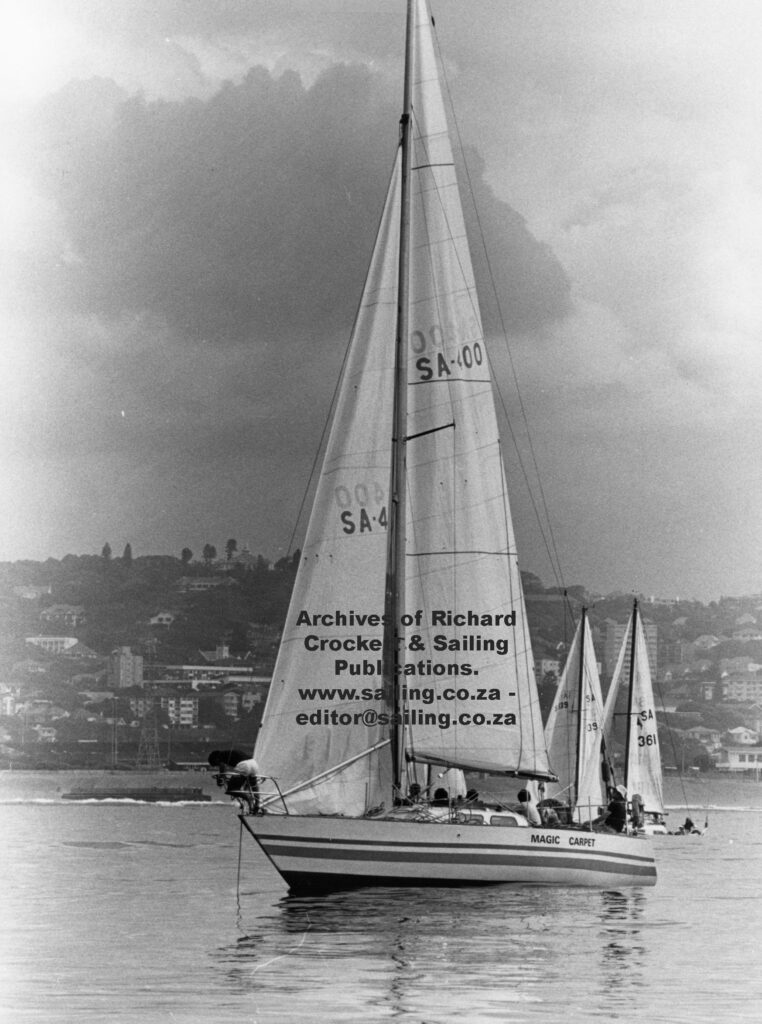 Vasco. I cannot recall which year this was taken although I was aboard Magic Carpet. There was no wind at the start and a massive current running northwards. Dave Cox ordered that we kedge on the start line – something no other competitor did. Some we swept back as far as Umhlanga before there was enough wind start sailed. 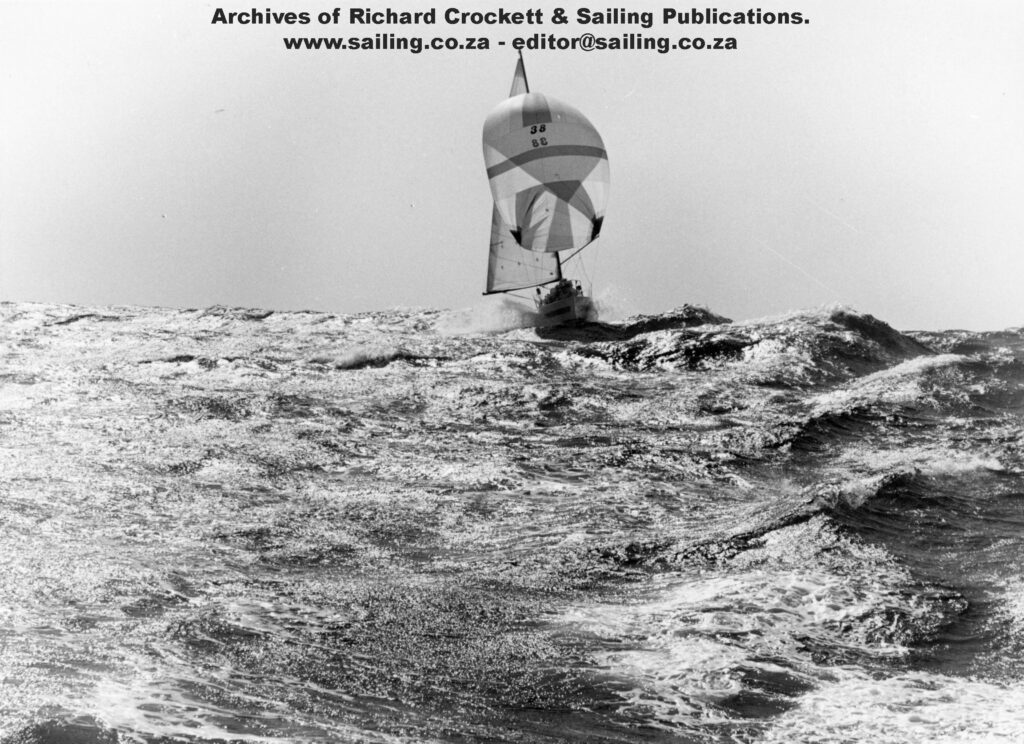 1984 Vasco. This pic of the RCOD Reaction was taken by Richard Crockett from Assegai just hours before the fleet was clubbed by a massive gale. Both yachts were deep in the Agulhas current at the time and flying in the strong north-easter. 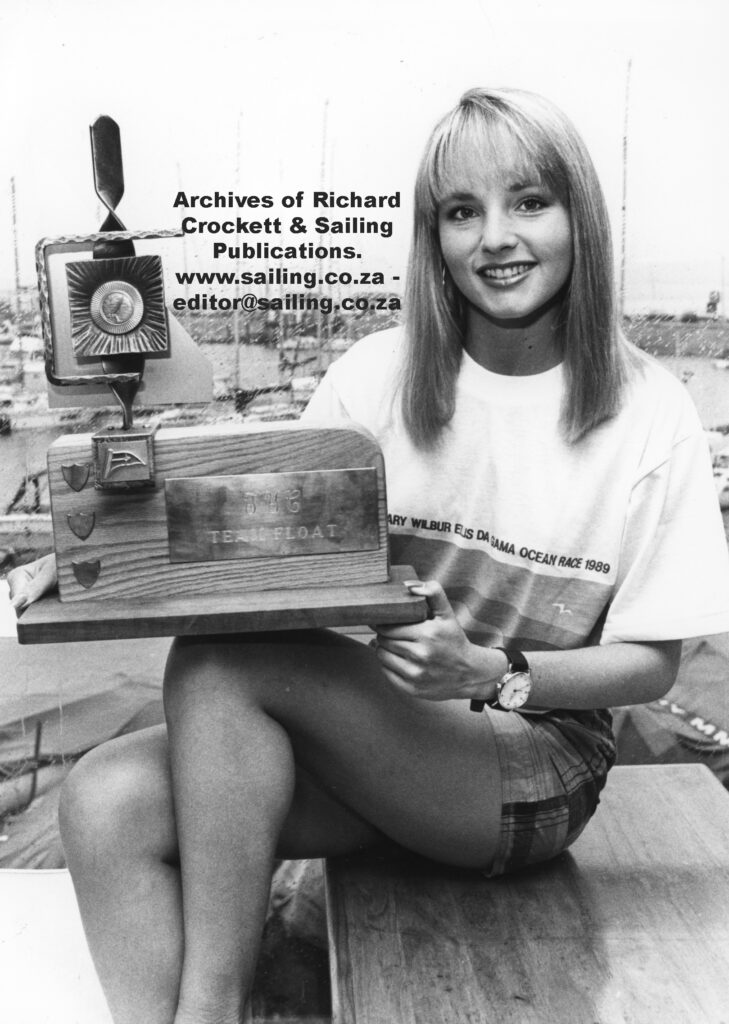 1989 Vasco. The Transvaal Yacht Club trophy was first sailed for in 1989 and won by the Royal Natal Yacht Club.
Durban model Toni Blumeris displays the new Inter-Club trophy which will be awarded to the Club which has the three highest placed yachts. 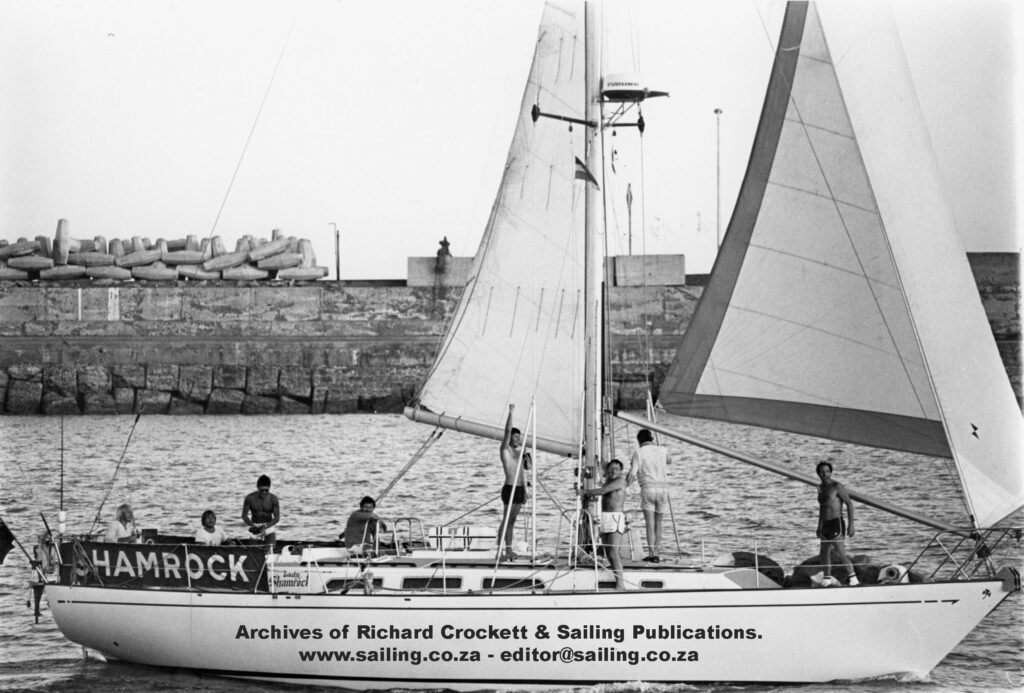 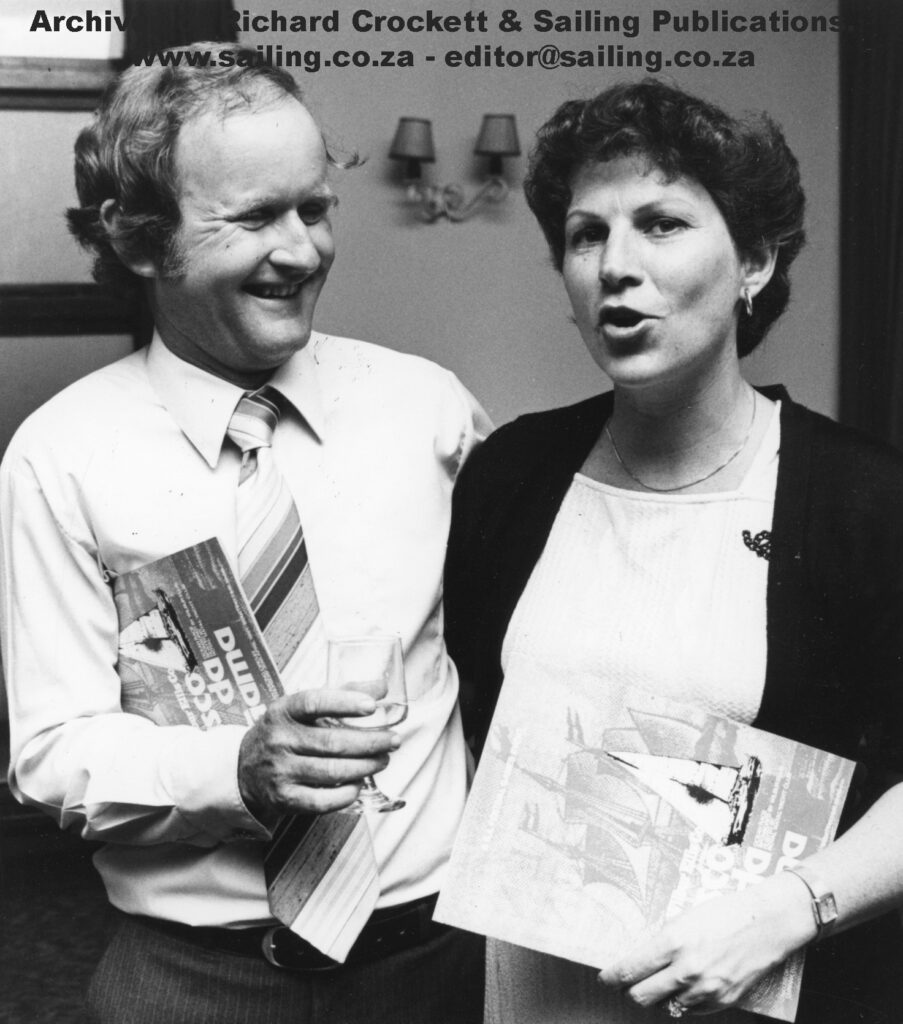 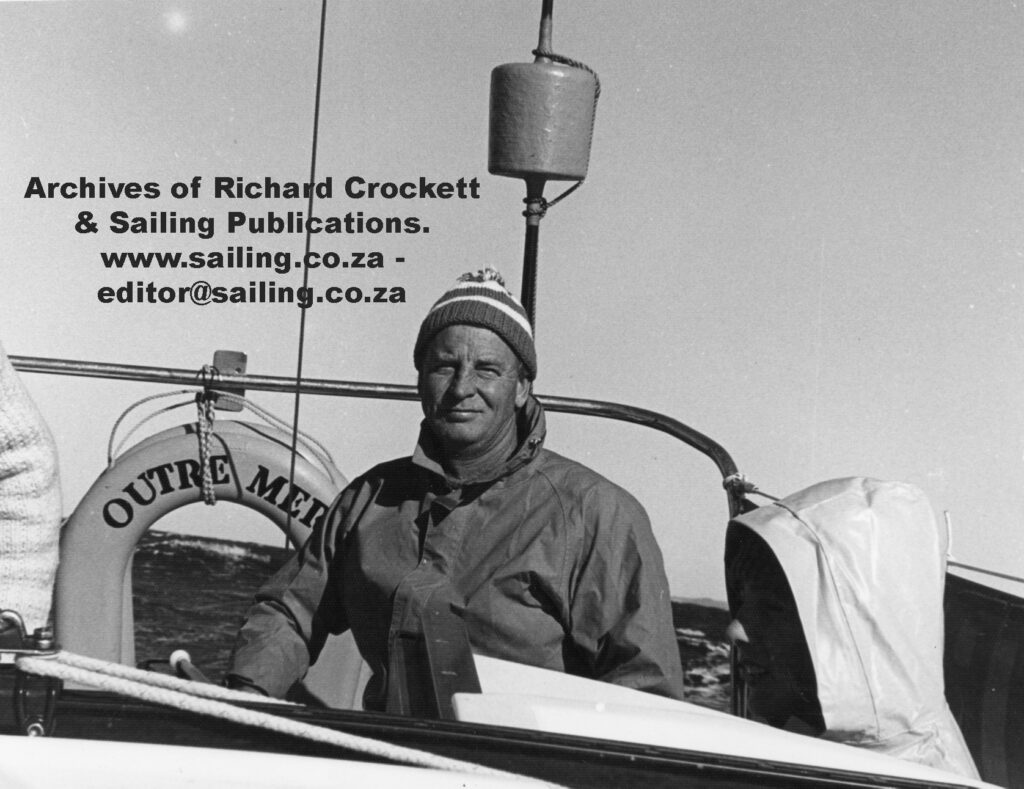 Vasco – 1977 or 1978. Brian Tocknell at the helm of Outre Mer in one of the very early races to East London.
pic by Richard Crockett 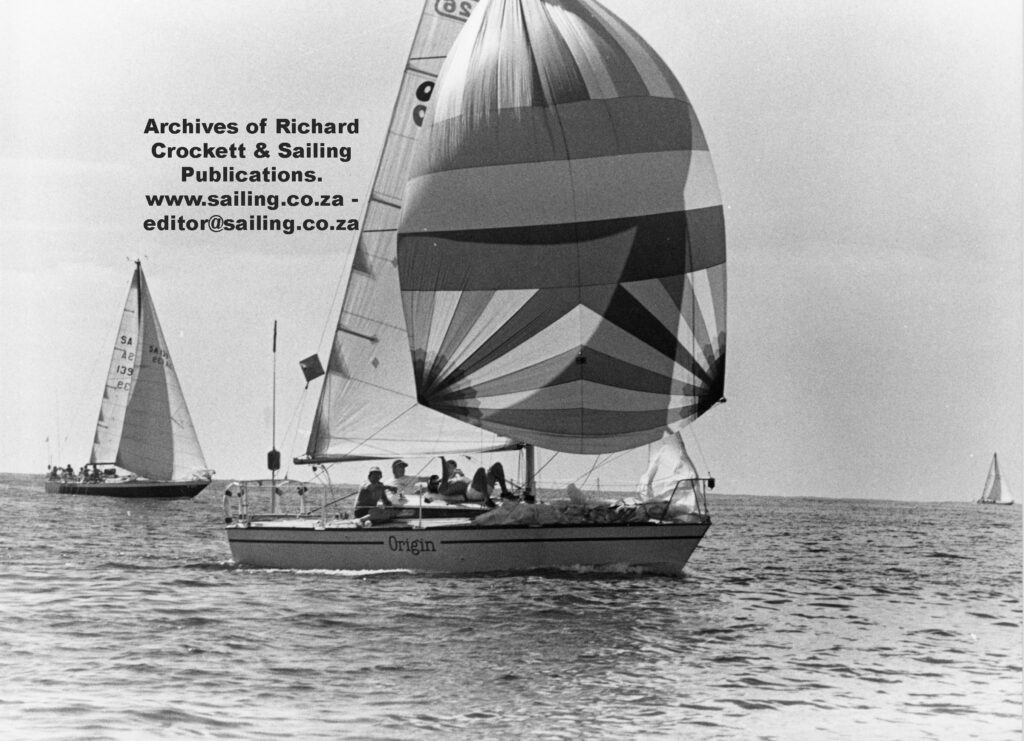 Vasco – date unknown. The L26 Origin with Red Amber in the background. 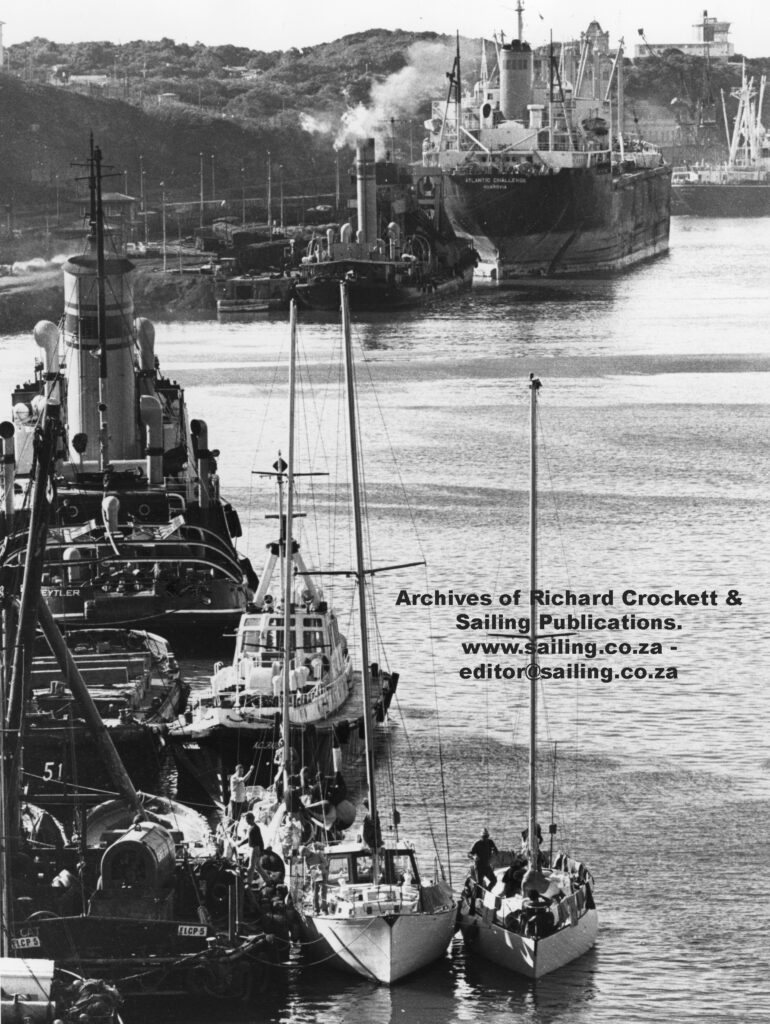 1977 Vasco. Safe at moorings in the Buffalo River, East London, are some of the competitors of the ’77 Vasco race. Moored against the barge is Sea Jade with Outre Mer alongside her. 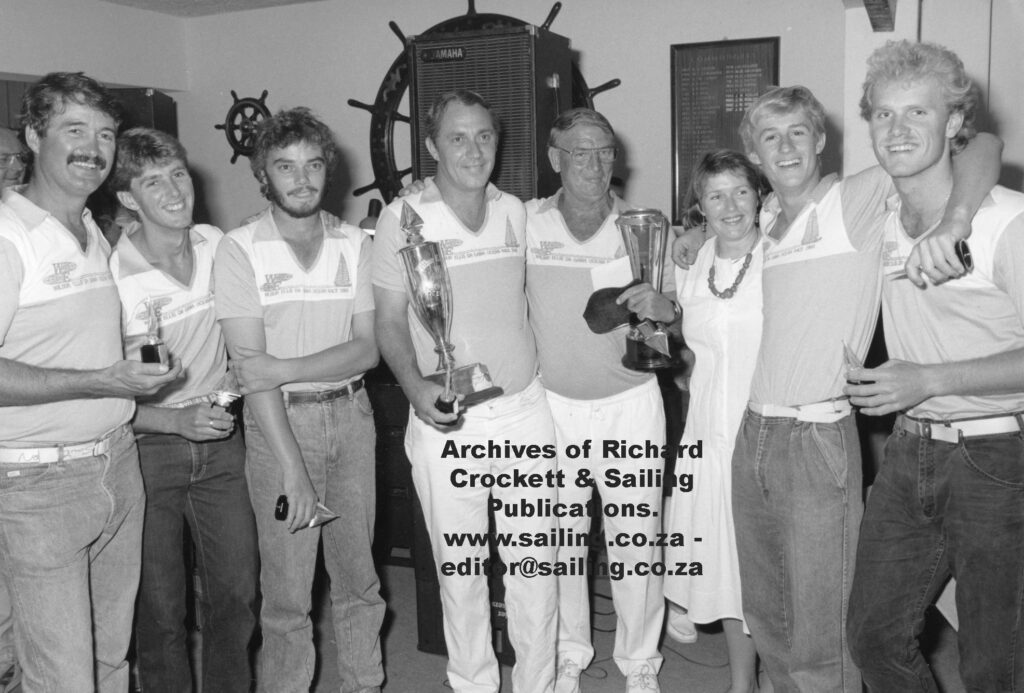 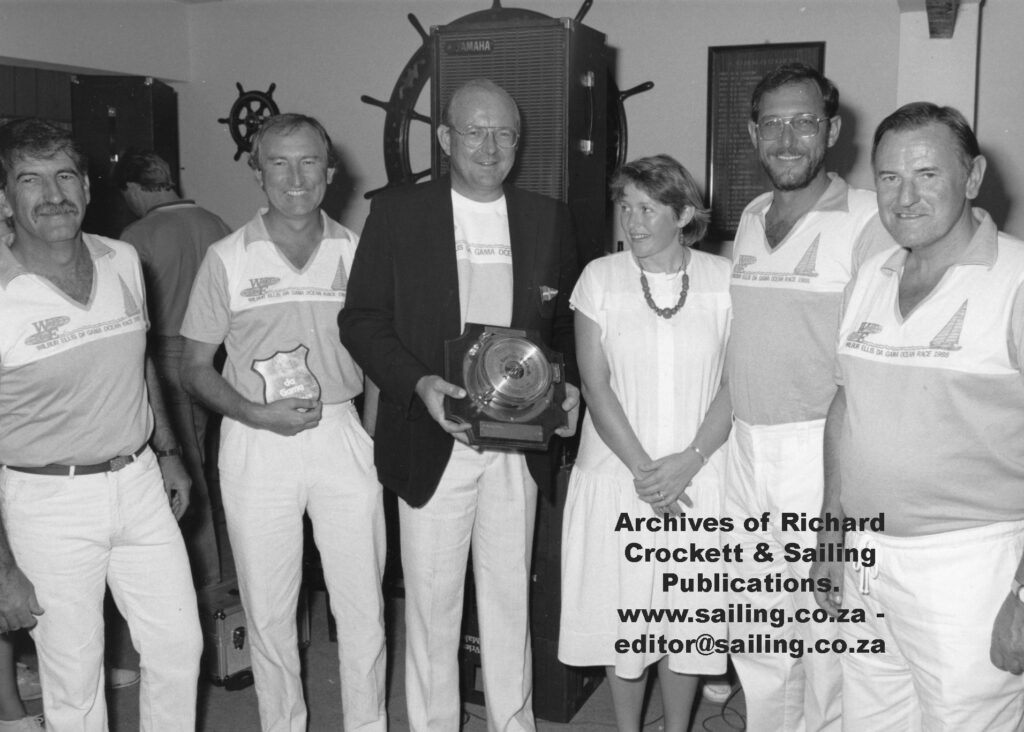 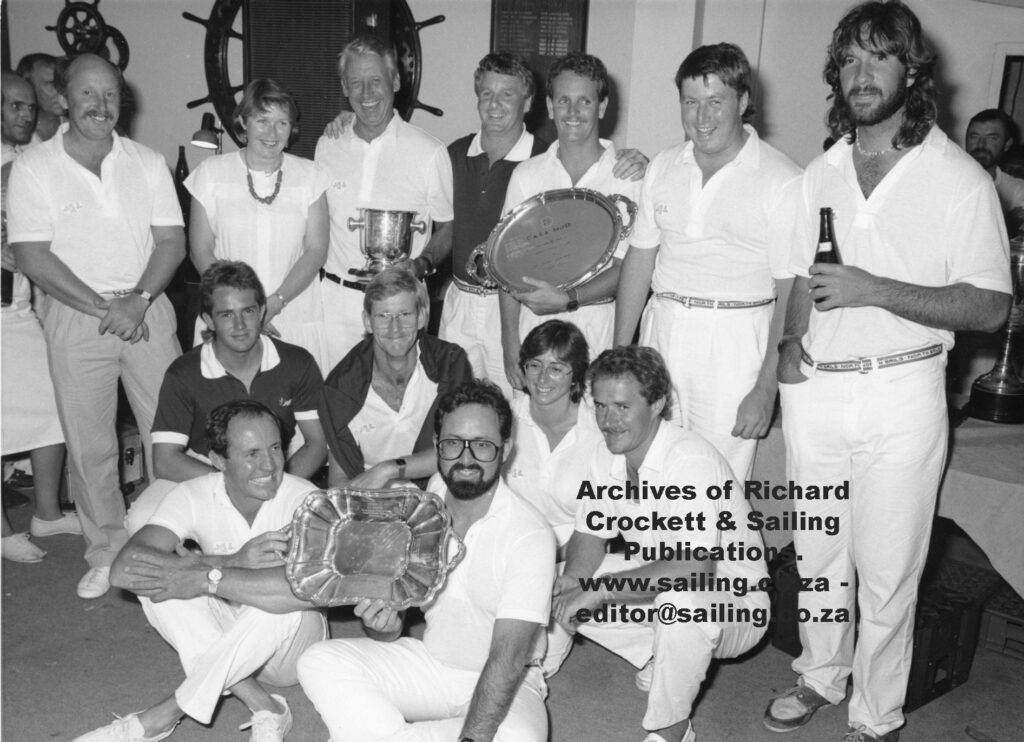