“Talking Sailing” From My Archives. The Worrell 1000 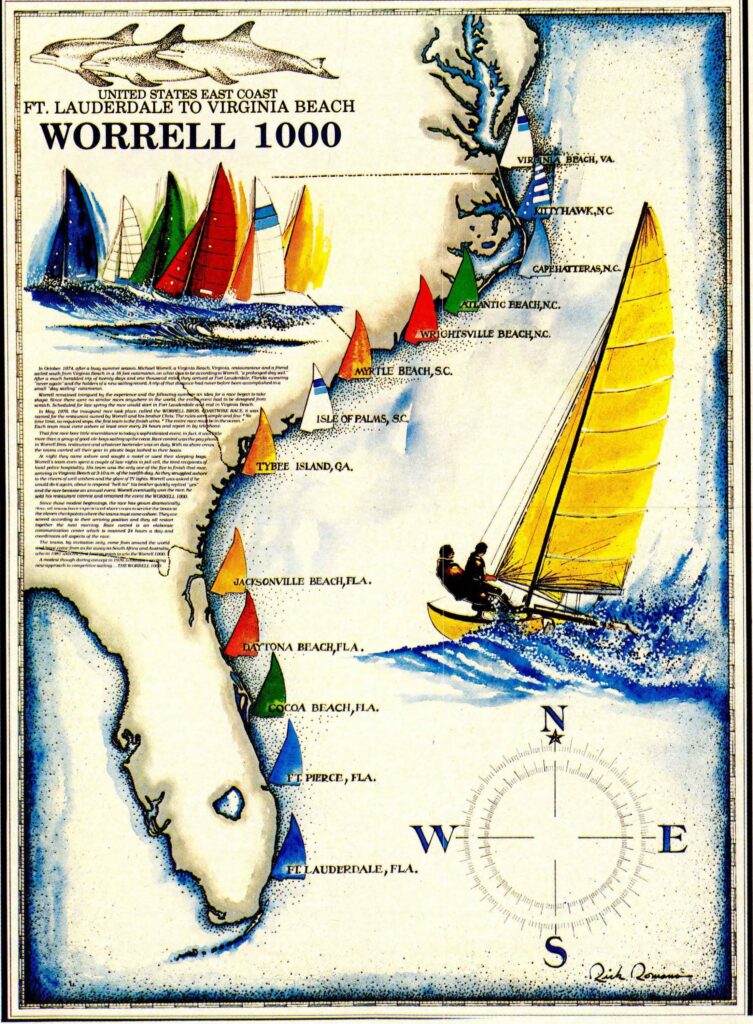 Unless you are a Hobie sailor you may well have not heard of the Worrell 1000 – a very tough 1000nm offshore multihull race from Fort Lauderdale to Virginia Beach on the USA East Coast.

In 1984, as first time contestants – and just one of 10 teams – they made their mark and almost upset the balance as they finished in an impressing second place.

This is how the report in SAILING Mag opened:

“There remains a vague memory of pain and exhaustion, of hypnotising concentration for long, gruelling hours, of exultation and emotions that came and went like shadows, leaving the kind of aftertaste that is so personal it cannot be described, so intimate, few others would understand it anyway.

“Flitting images of sharks cruising by, of giant rays slapping the waves with their wings, of sails and wind and water contrasting sharply with the high-tech ‘other world’ vision of the space shuttle being prepared at Cape Canaveral.

“David Kruyt’s experience of the Worrell 1000 is still an almost poetic one, still at that interim stage between impression and hard knowledge, the balance between art and science not yet firmly established.

“Jonathan Paarman’s memories are more of fact and event, hard-nosed and down to earth, the balance sheet already drawn up and audited. Hard evidence collated, analysis completed, report prepared, he knows exactly what happened and why!

“And this contrast, perhaps more than any other, identifies the differences between these two men – and what made them probably the strongest of the ten teams competing in the Worrell I 000.

“For there seems little doubt in anyone’s mind – least of all those of the organisers and the winning Froome-Figueroa combination – that had the South African Kreepy-Krauly contingent been armed with the local condition and course knowledge of the winning team (Froome has sailed it five times, Figueroa twice) they would have taken the title.”