“Talking Sailing” From My Archives. The Sprog Logs 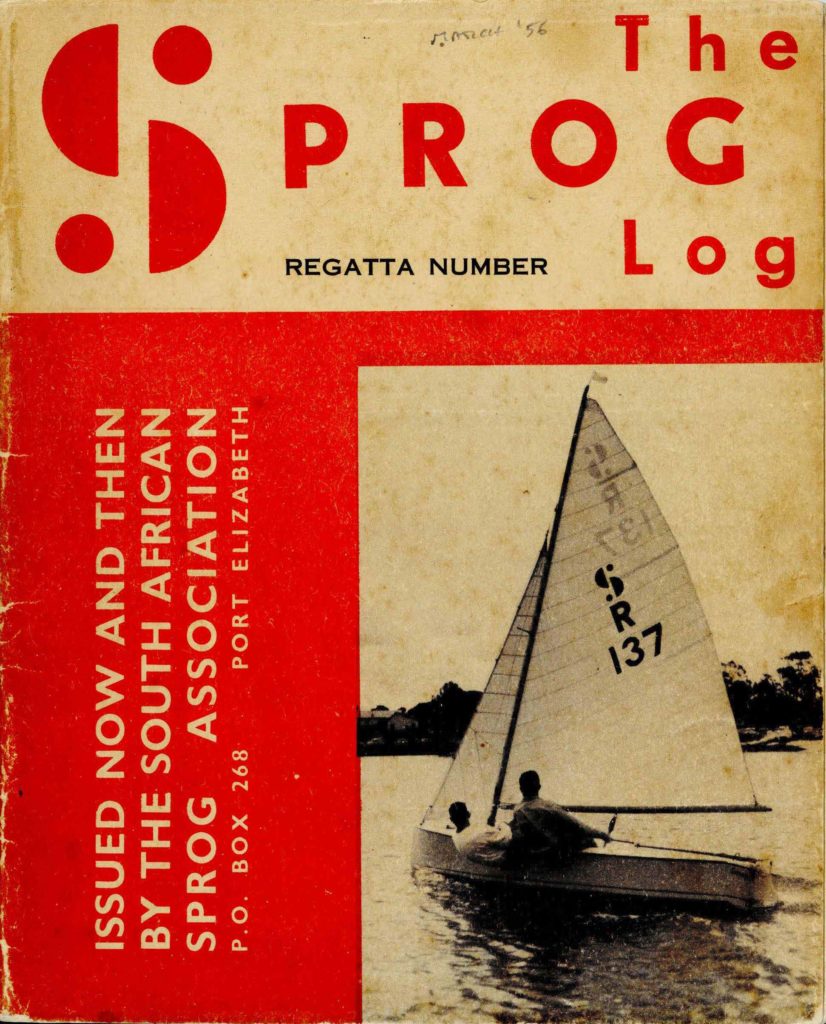 The result of additional tidying up and general organising of my archives revealed a number of copies of “The Sprog Logs” I was given many years ago for safekeeping. Sadly I cannot remember the name of the person who gave them to me, although I vaguely recall him being from Pietermaritzburg.

The earliest copy I have is from March 1956, that’s 65 years ago, yet the opening article penned by Herbert McWilliam is still very pertinant and topical in many ways today, which is why I have reproduced it in full below. His choice of words too is interesting – like the word “decreptitude” which I just love as the description of a pretty old tatty Sprog!

I was also fascinated that the Sprog was used for the SA Olympic Trials – but as a singlehander! That’s novel indeed!

In fact throughout this newsletter there are many interesting observations, letters, suggestions and “things” of interest – all too numerous to mention. So, READ THE FULL VERSION HERE:  1956 03 – Sprog Log – 002133 – OCR

“Here we are again! At the Annual General Meeting at Zeekoe Vlei on February 12th., the ‘Working Committee’ was unanimously re-elected en bloc, and for my own part, I must confess that I was very happy to be given the opportunity to continue where we left off. As you can imagine there is a lot of hard work entailed by these honorary jobs but I know the other members of the Committee would agree that, provided we are backed up by your enthusiastic support, nothing is too much trouble.

“By now you will have heard what a great·success the Regatta was, and how the Sprogs impressed everyone by their numbers, the friendly spirit of all who sailed them, and their tenacious and surprising performance when the weather was boisterous.

“I have attended practically every annual Regatta since 1929, and I have never been more consoious of the feeling of good fellowship among those taking part than at Zeekoe Vlei this year. It was quite remarkable. In every class there was an undefinable atmosphere which seemed to invite a different approach to the usual problems that trouble all those eager contestants who feel more than personal honour is at stake during the critical moments which occur in every race.

“Nevertheless, this attitude can be carried too far. Yacht racing is one of the few sports where there is no umpire or referee. It is up to individuals to make certain that the rules of the game are followed. It is’nt really very sporting, therefore, to “hand off” a few boats at the start, or to allow other infringements to occur without protest, with the consoling excuse that one is being “big-hearted”. When two boats collide both can’t be in the right. There was far too much “give and take” at Zeekoe Vlei, and while this reduced the hours spent “on the job” by the protest committees, it did’nt make a very good impression as far as the onlookers were concerned. Some of the traffic-jams on the starting line were far too conspicuous to be ignored by anyone, and most of them could be seen coming a mile off.

“Incidentally it is worth observing that Manfred Currey’s old axiom was never more obvious than during this Regatta, and this applies to all classes. Currey states “Remember, it is not the boat that crosses the starting line first, but the one that is ahead a few minutes after the start that has made the best start.”

“When there is a large number of boats starting it certainly pays to “keep one’s nose clean”, and avoid the confusion at the windward end of the line. This applied to most of the Sprog starts, even when the windward starters were undoubtedly favoured. Exceptions always prove the rule, and it was interesting to watch the line-up of the Sharpies, when (as far as I recall) there were only two occasions when what looked like the best start ultimately proved to be the most successful.

“Everyone in the Sprog class was convinced that the best man won. Allan Scott – despite the fact that he and his crew were light-weights – thoroughly deserved to carry off the Trophy. “Serang” was tuned to perfection, and the way they sailed her was quite outstanding. Even in the disastrous race, during the stiff North-Westerly when 20 Sprogs capsized within ten minutes of the start, Scott and Brian Reynolds, with rugged determination, continued the struggle, often knocked almost flat in the squalls, to finish a good third. Apart from this Allan dealt effectively with a wicked bout of virus ‘flu, which fortunately attacked him during the few days between the first and last part of the contest. 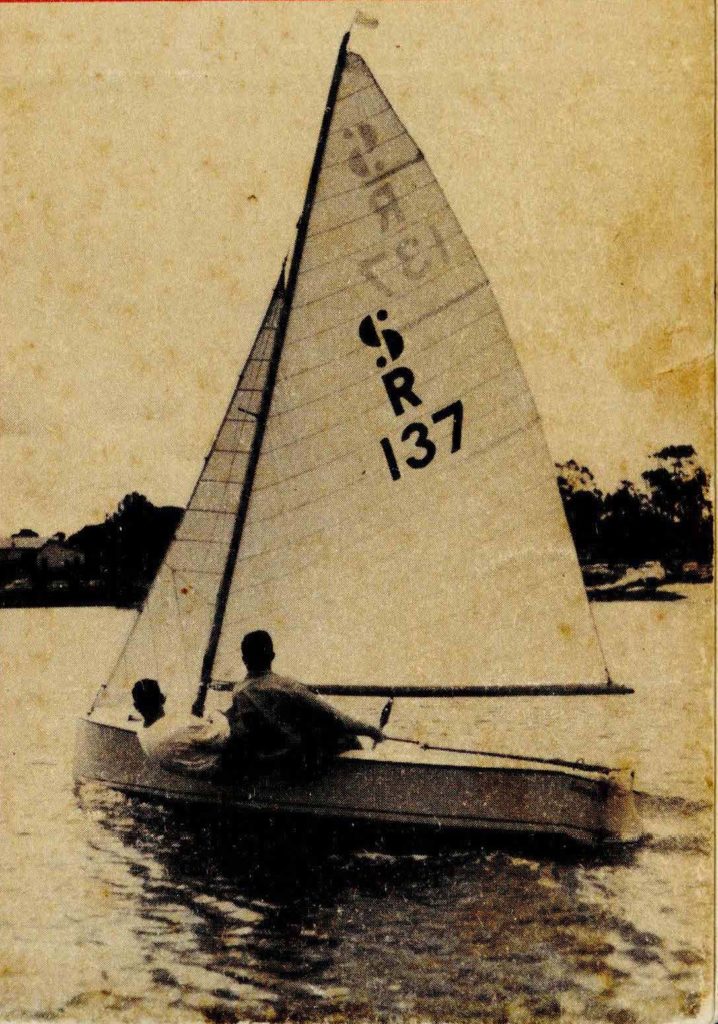 “The way in which “Serang” outpointed and out-footed her rivals was something which those who suffered it will long remember. That a boat can be trimmed to sail so high and so fast is no mere chance; it takes skill and patience. This was equally borne out by the fact that Mc. L. Thomas managed to get his eight year old “Sagitta” to a pitch of performance which, with the skill of helmsman and crew, brought her a well-deserved third place. Everyone who examined their boat, with her odd Elastoplast wrappings, loose wire lashings, and general air of decerepitude, must have wondered where the “go-fast” was hidden. It should be heartening to all Sprog owners to know that it is’nt just the flashy new jobs, sparkling with chromium plate and gleaming varnish, that are most successful. “Handsome is as handsome does” is a good motto for Sprogs, and the performance of “Sagitta” is a splendid advertisement for the class.

“The consistent sailing of Graham Pearson in “San Souci”, who finished 2nd, deserves honourable mention and he is to be congratulated, too, on being selected as a finalist in the ultimate Olympic trials. And although Jack Koper did not show up particularly well in the actual contest, his performance in the trials, which were held in Sprogs, singlehanded, resulted in his being chosen for the trials and so he deserves a special mention.

“Altogether, it may confidently be said that the 35 Sprogs, and the 70 ambassadors of the class that sailed them, have done more towards creating enthusiasm and interest in Sprogs than anything that has happened since the first Sprog was launched.”

I have the following Sprog Logs in my posession, and should anyone have copies they would like to add to this list, I will happily receive them. But should there be a Sprog stalwart out there who would like to have my copies for safekeeping, we need to correspond.