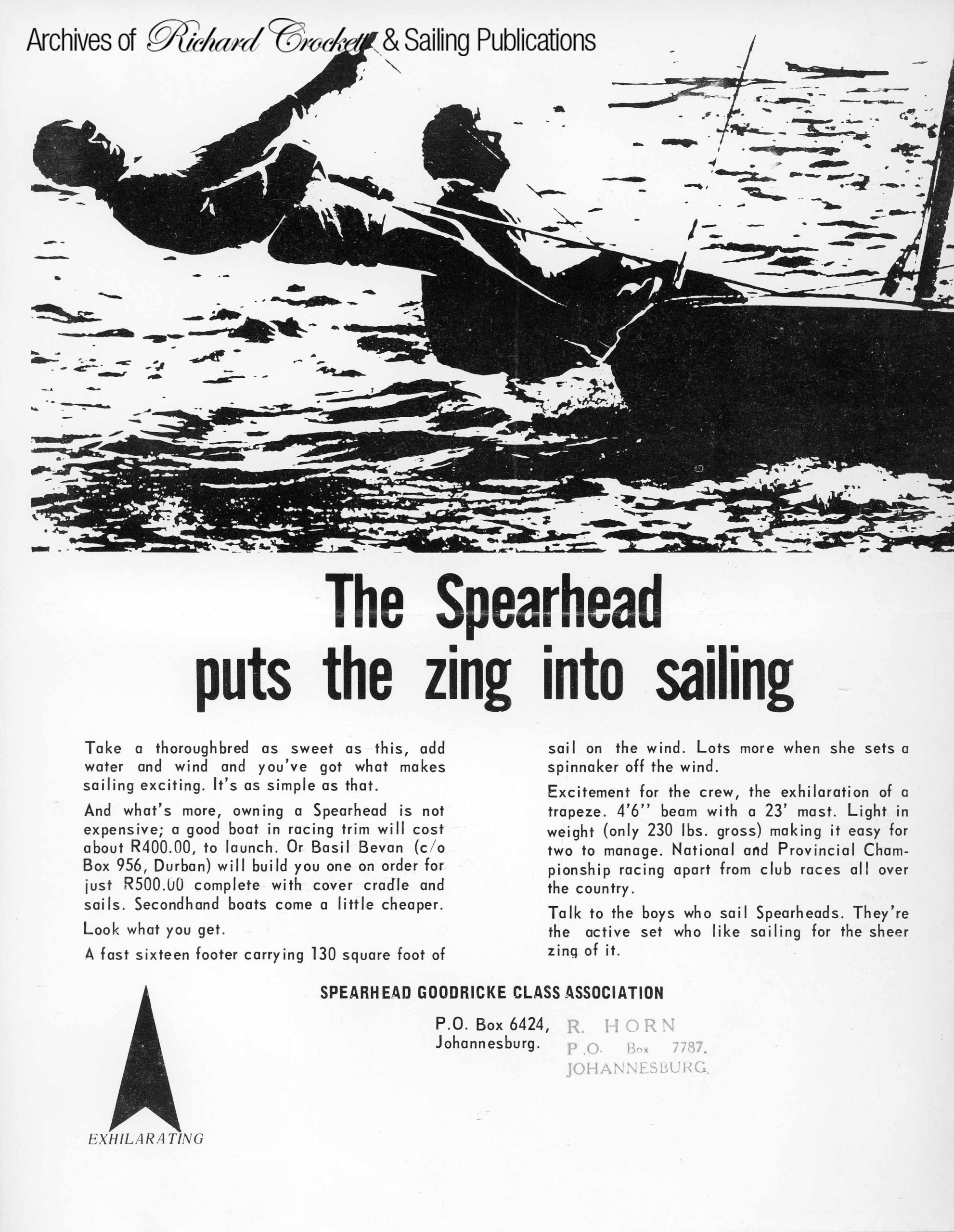 Last week I covered the Sprog and Winger dinghies, and promised to follow it with the Spearhead.

In his book “Sailing in Southern Africa”“, Anthony Hocking said that the design freedom allowed among Goodricke dinghies, had many enthusiasts feeling that the Vivace hulls should be made a one-design class, to eliminate possible continual expensive changes which had proved the bane of other good designs. The Vivace Class would still be within the current Goodricke rule, but would have to have a name of its own.

As a result SA Yachting magazine offered to give a year’s subscription to the reader who suggested the most appropriate name – and so was born the Spearhead, which apart from being instituted as a class on its own, of course sounded the final death-knell of the old Goodricke dinghies. However it was some time before the Spearhead-Goodricke established itself.

First mooted by Frank Spears in 1956, the Spearhead was developed into a one-design class six years later, became recognized by SAYRA as a national class and, at one time, seemed set for international adoption.

Frank Spears’s aim in designing the Spearhead was to combine high performance, light weight, a fair size and low cost, and at the same time make sure the boat was suitable for home construction. The resulting boat follows the lines of traditional planing hull sections, using on the one hand a vertical bow to achieve maximum”waterline length, and on the other minimal practical beam for speed through the water”. 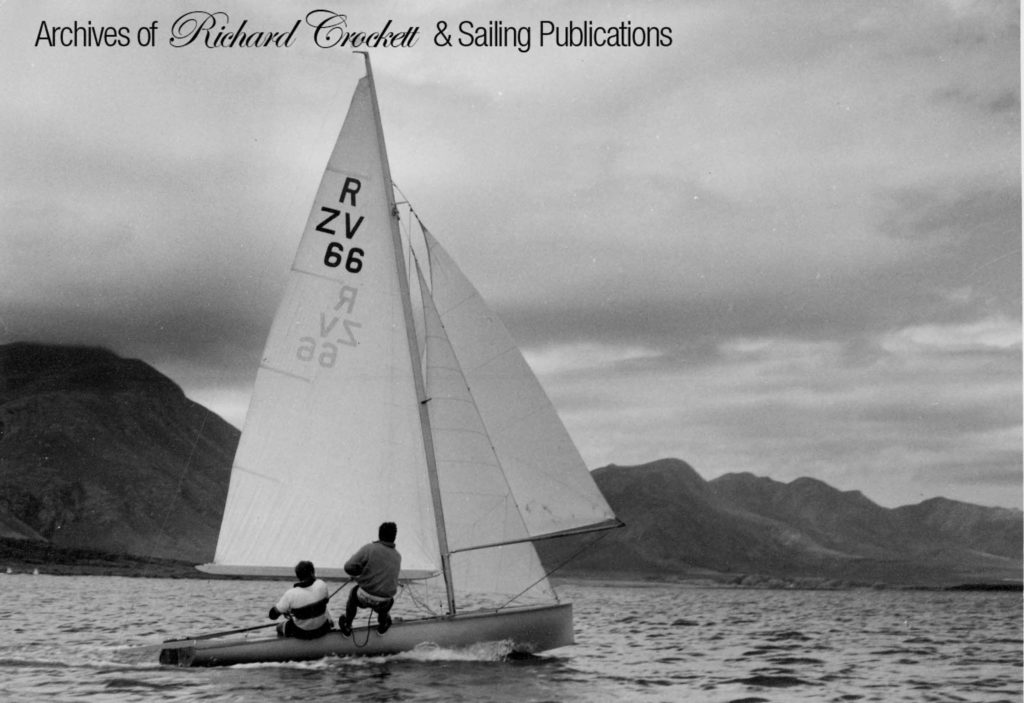 The Spearhead was designed for a crew of two in any weight category – though the most efficient weight both for helmsman and crew was in the 150-160 lb (68-72 kg)
class. The sail area was not excessive – but rather than spoil the boat’s fine lines and give it a heavier hull, Frank Spears added a trapeze to give the crew a mechanical advantage.

Though originally conceived as a young man’s boat, the Spearhead retained the loyalty of many senior sailors.

According to Hocking, “what ended the Spearhead’s career in South Africa was nothing less than a verkrampte-verligte fall-out between club fleets in deciding whether or not to adopt Five-o-Five style splashboards for commercial glass-fibre production. Ever since the victory of the verkramptes in deciding not to admit the splashboards, the class has been in decline – though its potential is as great as ever”.

The first of the ‘new’ Spearheads, named Vivace, was built with the aid of a wooden mould using diagonal glued veneers, plus she also fell within the Goodricke Class rules – hence the Spearhead-Goodricke connection. Ultimately the Spearhead became a one-design class. In 1958, Frank Spears suggested a new sail plan with a smaller mainsail and bigger jib to avoid the necessity for special ‘storm’ masts and sails. 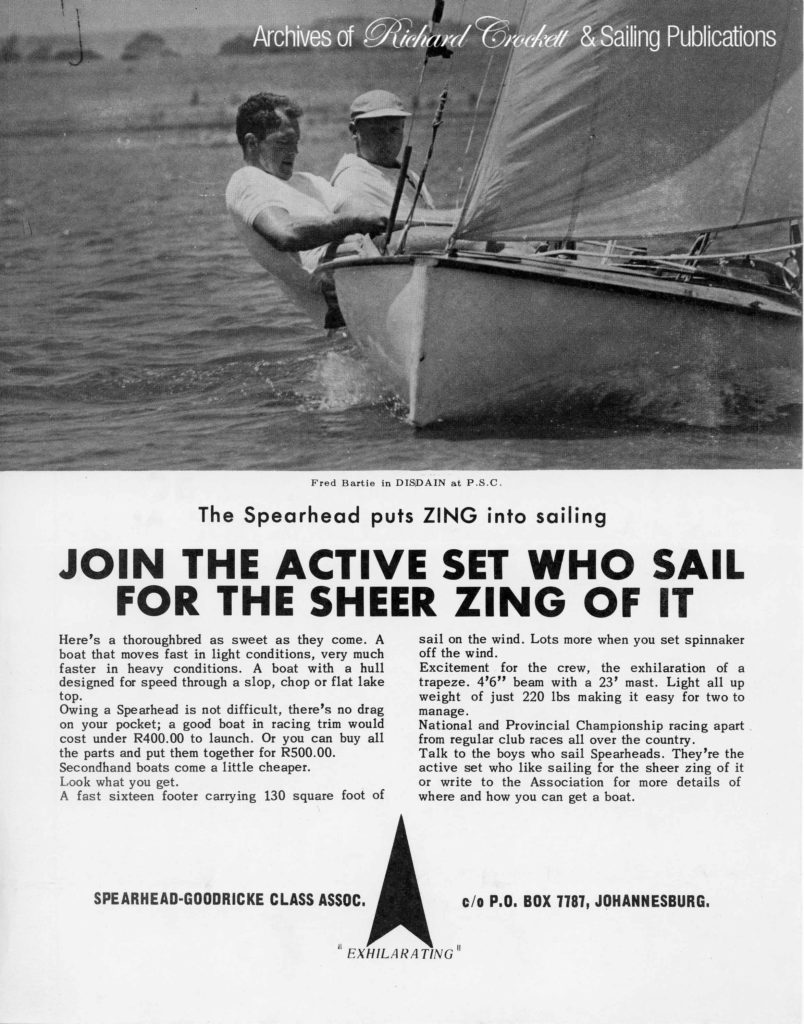 It was at about this time that the sail logo changed from an ‘R’ to the spearhead as most people knew it.

The Spearhead was such a successful boat that even the legendary Paul Elvstrom said: “The Spearhead dinghy has great legitimacy, as it gives speed and excitement for nearly half the price of a FD. There can be no doubt that the Spearhead type of Goodricke is fulfilling a long-felt need in South African yachting.” And to add legitimacy to those comments, he took plans back to Denmark.

Boats did appear around the world, and not in great numbers, although it did to some degree legitimise the “Spearhead Worlds” held in the ‘60s from what I can gather, although I have yet to find a report on this regatta.

This fine boat certainly turned heads and provided exceptionally exciting sailing in general and top-class close cut-‘n-thrust racing. And those who raced them were amongst the finest in the country at the time! 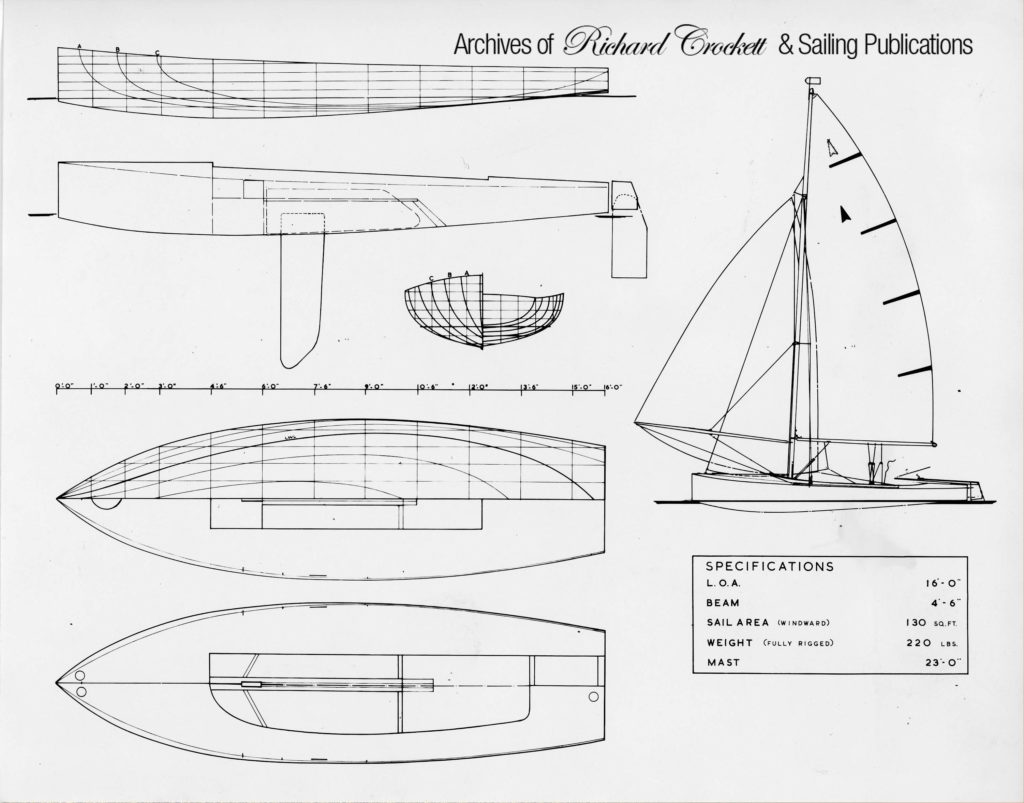 DURING THE DAY THIS POST WILL BE FOLLOWED BY A LARGE SELECTION OF CAPTIONED SPEARHEAD PHOTOS.