“Talking Sailing” From My Archives. The Optimist Dinghy 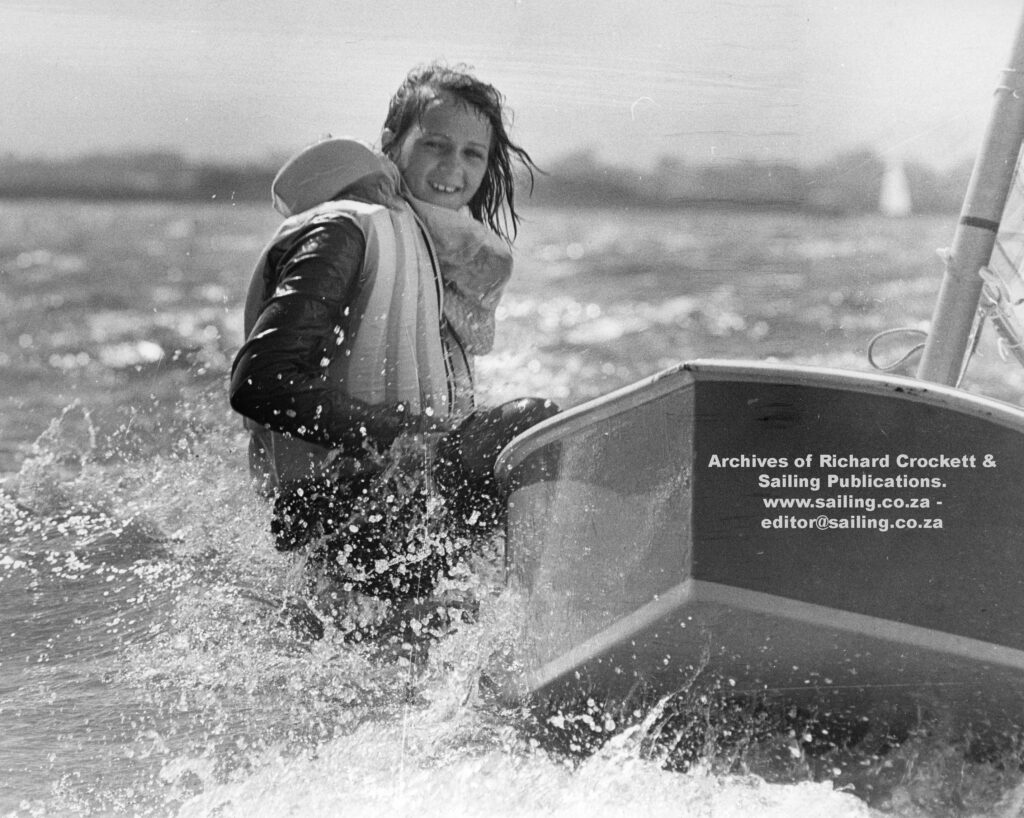 Sadly there is no caption to identify this young sailor enjoying herself on the water and showing why youth sailing can be so much fun.

I am told by a very reliable source that the final race of the Optimist National Champs late last year (2021) was an absolute humdinger of a race with the winner “taking all”. It was of course a race between the two Seans – Sean Kavanagh and Sean Sadler, with Kavanagh being the ultimate winner and the two still level-pegging on points after the final race, so the winner of the final race decided the final result.

These two had levelled-pegged throughout the regatta and were streets ahead of their competition. That final 12th race was a match race where the two crossed tacks and the lead changed several times, with absolutely nothing more than a boat length between them at any time. These two, at their tender age, were a credit to the sport and sailed with maturity, guile and heaps of good sportsmanship.

I have purposely opened this feature with this very brief description of that final race as the closeness of the regatta was never mentioned in any info I saw, and was never written up so will be lost to the sailing world forever. That’s very sad as this is a race which should have been documented from start to finish, and published for the world to read and others to learn from.

Having that off my ample chest brings me back to what today’s feature is all about – the Optimist dinghy – and of course the history of our sport.

My research through my complete record of SA Yachting magazines revealed the very first mention of the Class in 1968 – but was all about the Rhodesian Optimist scene.

Further research shows that the very first Optimist World Championship was in 1962, and that the 1973 event was due to be held in Rhodesia, but was cancelled for political reasons.

“The story of the Optimist goes back to 1948 when the Optimist Club of Clearwater, Florida, was looking for a way to help underprivileged children take part in a healthy pastime. They hit on the idea of developing an easy to build pram sailing dinghy, and adopted a design of Clark Mills suited for children aged from 6 to 15. With the reliability of the class thoroughly proved, Optimist fleets spread through America and then Europe, where Paul Elvstrom recommended the little boat as the ideal trainer for youngsters up to the time when they became too heavy to keep up with their lighter friends.

“The Optimist, easily and cheaply built by amateurs, was introduced to Rhodesia in the early sixties-both in Bulawayo and Umvukwes. The little boat has gone on to become the largest class in Rhodesia with more than 150 boats registered and fleets at seven clubs. In South Africa interest in the class has not developed as fast, but there are flourishing fleets at Henley-Midmar in Natal and at Zeekoevlei and Voelvlei in the Cape. At Zeekoevlei ten Optimists are owned by the club and lent out to junior helmsmen for a season at a time. Clubs in Mozambique are now taking interest in the Optimist as the Portuguese Department of Sport has recommended it.

“Most Optimists are home-built in wood. A new boat fully rigged and ready to sail can be built for less than R70. In Rhodesia a glass-fibre mould is in production. The Optimist is regarded as a sailing dinghy first and foremost, but it is so easily stowed and transported that it makes an ideal yacht’s tender.”

As always my photo archives are crammed full of old Optimist pics, which I will be sharing very day as I unveil new reports on the progress of the class. 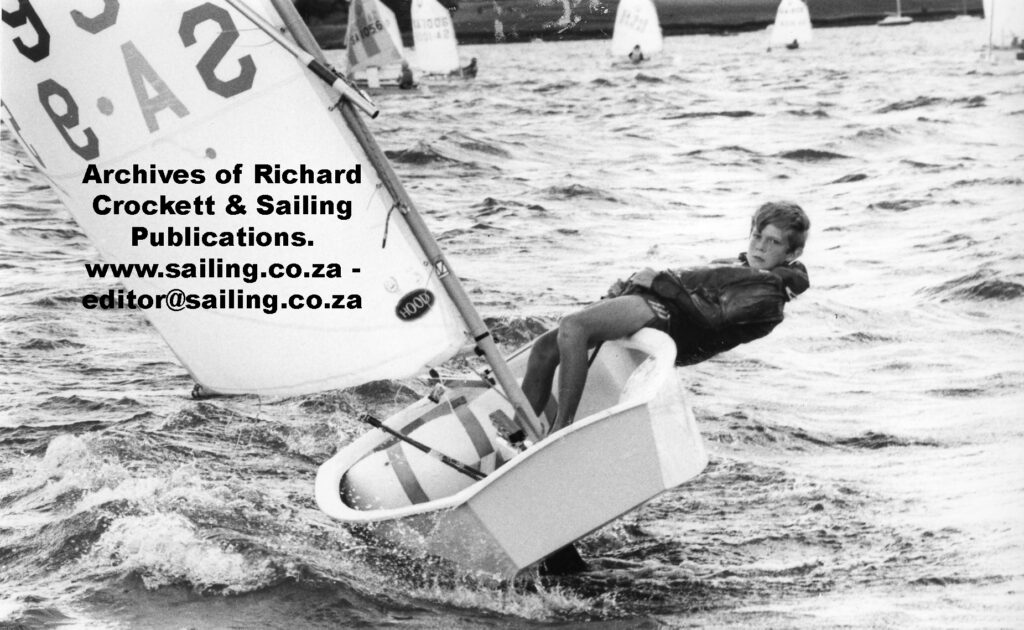 D Udal at a picturesque angle during the Junior Nationals. 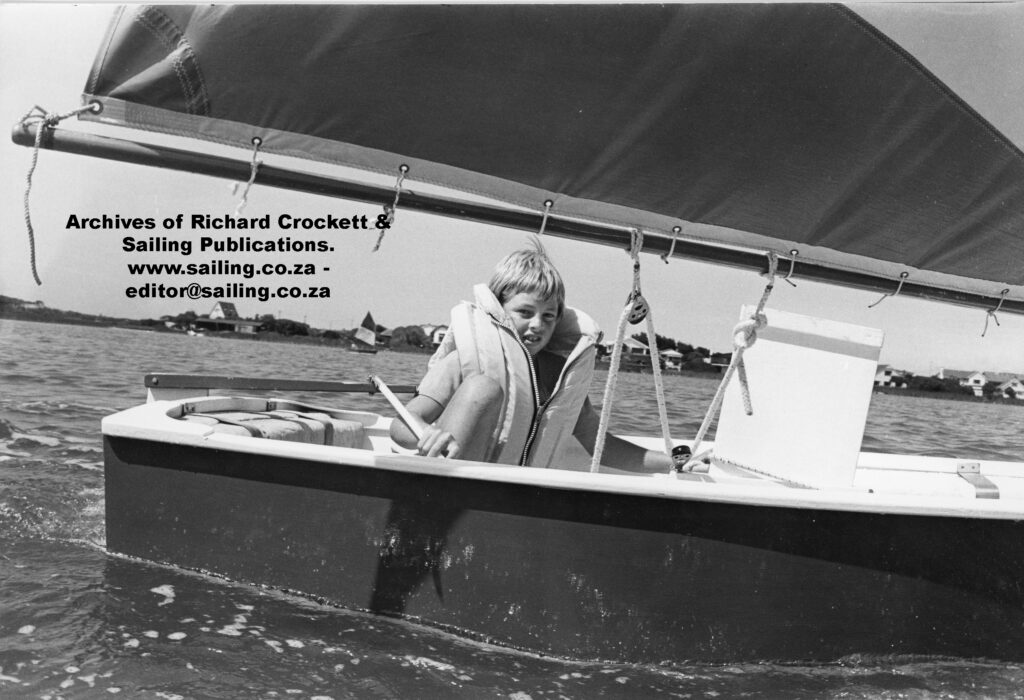 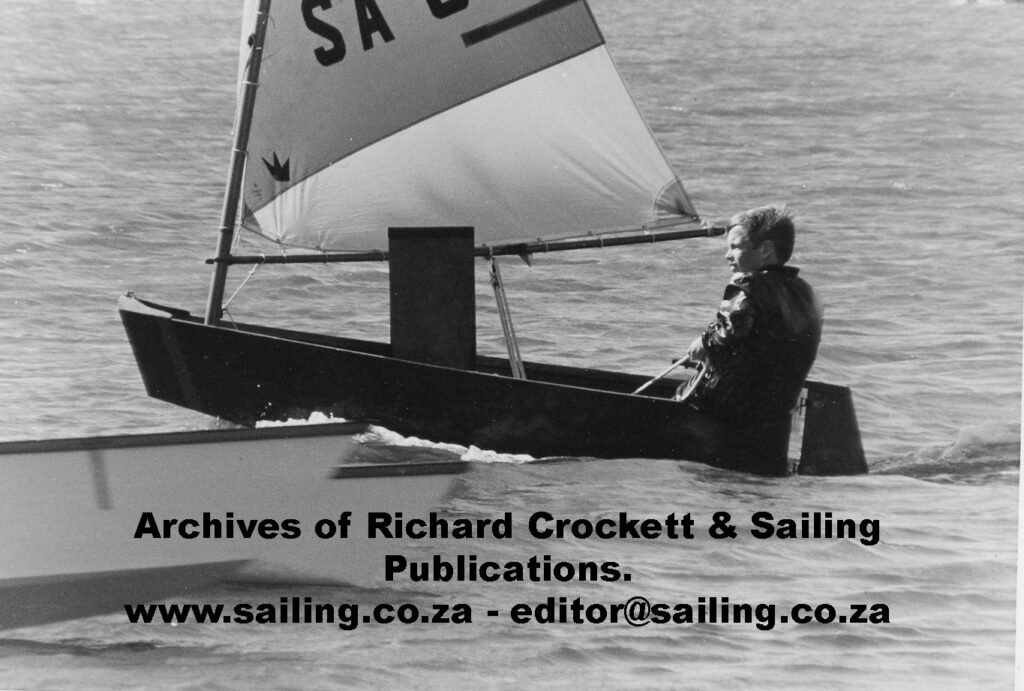 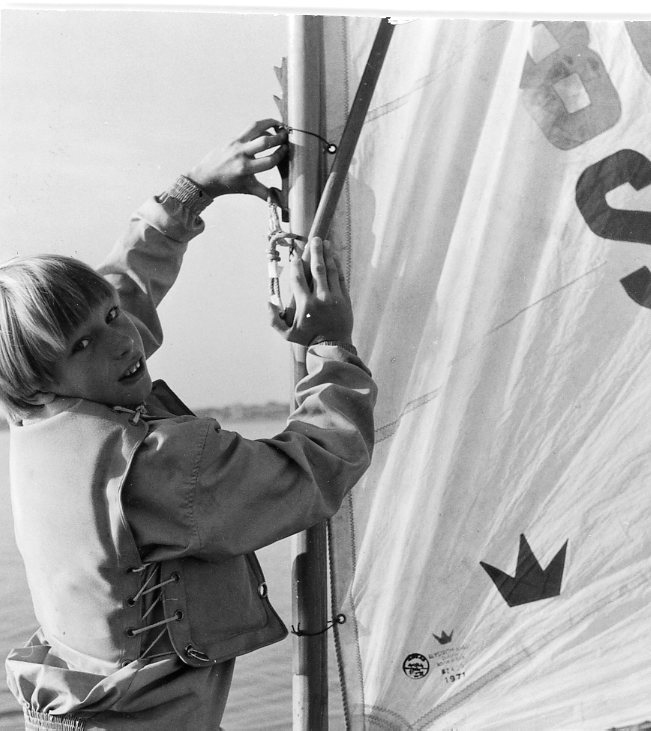 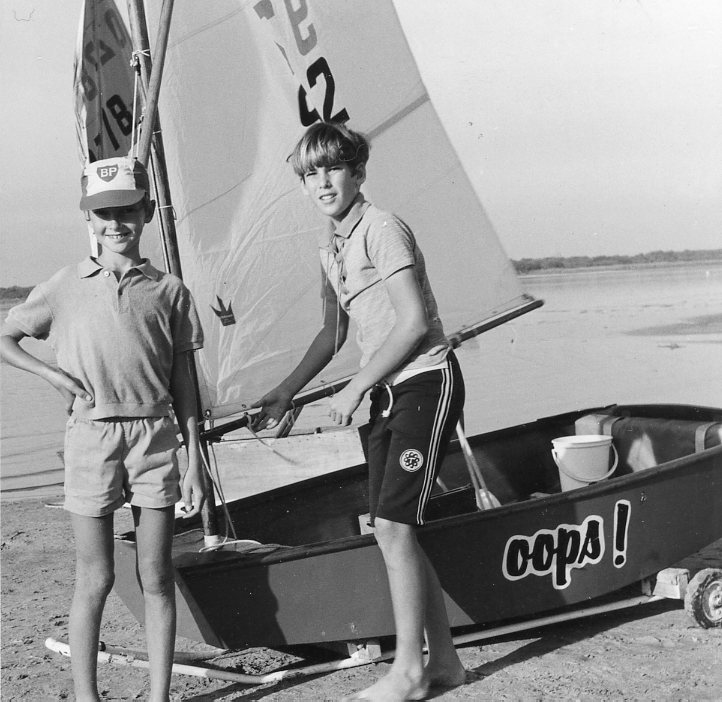 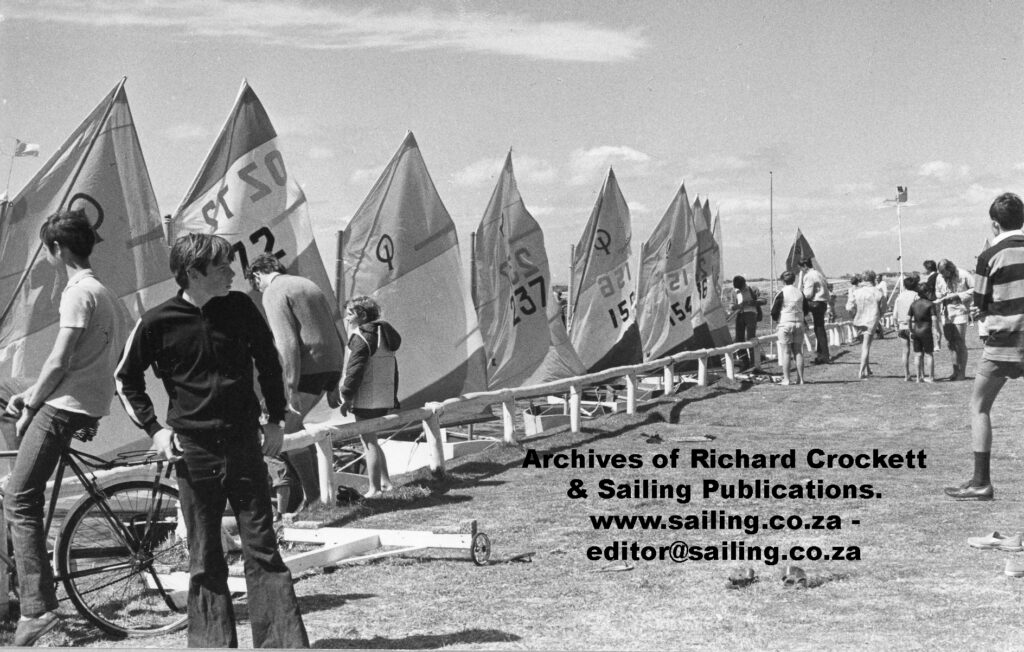 The Monterey Prep fleet, lined up from the left, were outstandingly well organised, fitted and trained. The school awards colours for distinction in sailing. 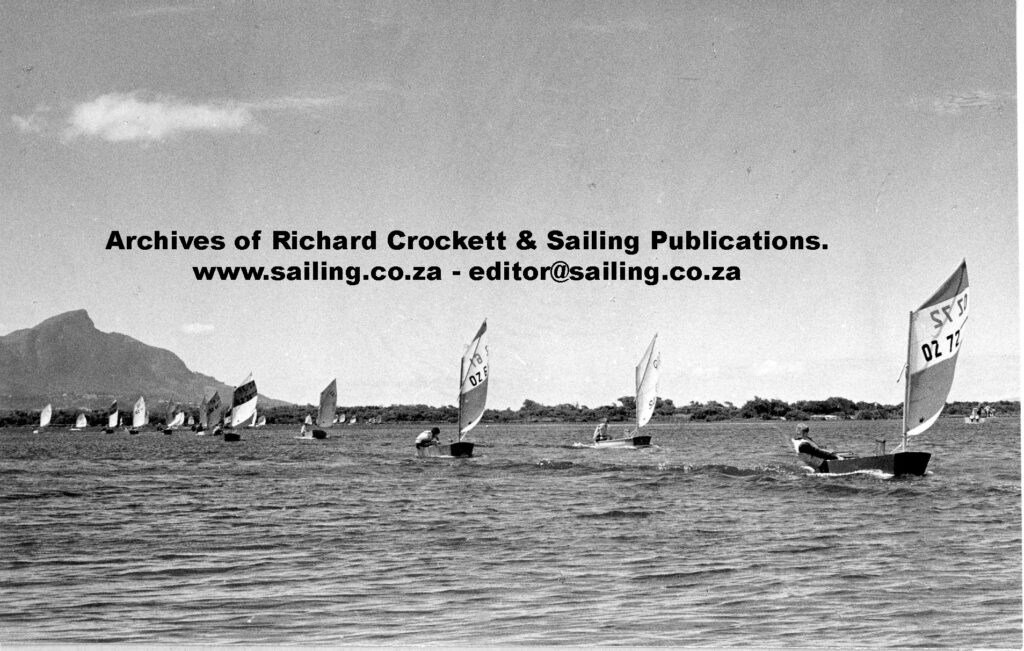 Ex-Rhodesian Optimist leader Michael Gray (72) leads a run of boats as a member of the Montery Prep School team. 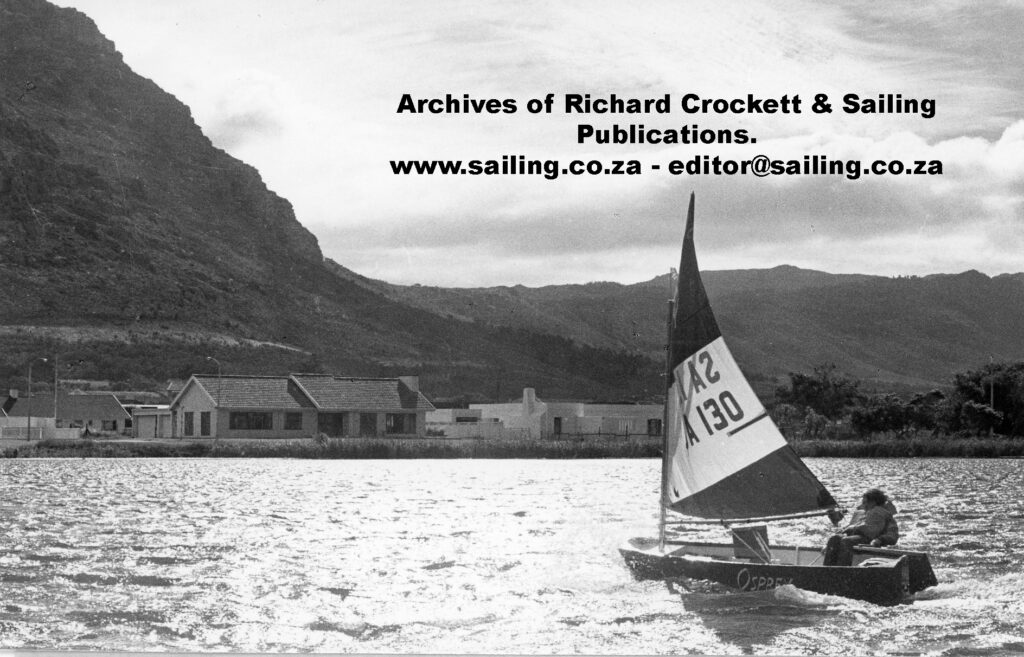 After a long, wearing race which he nearly won, G Bruce cruises into the IYC basin with runner-up line honours. 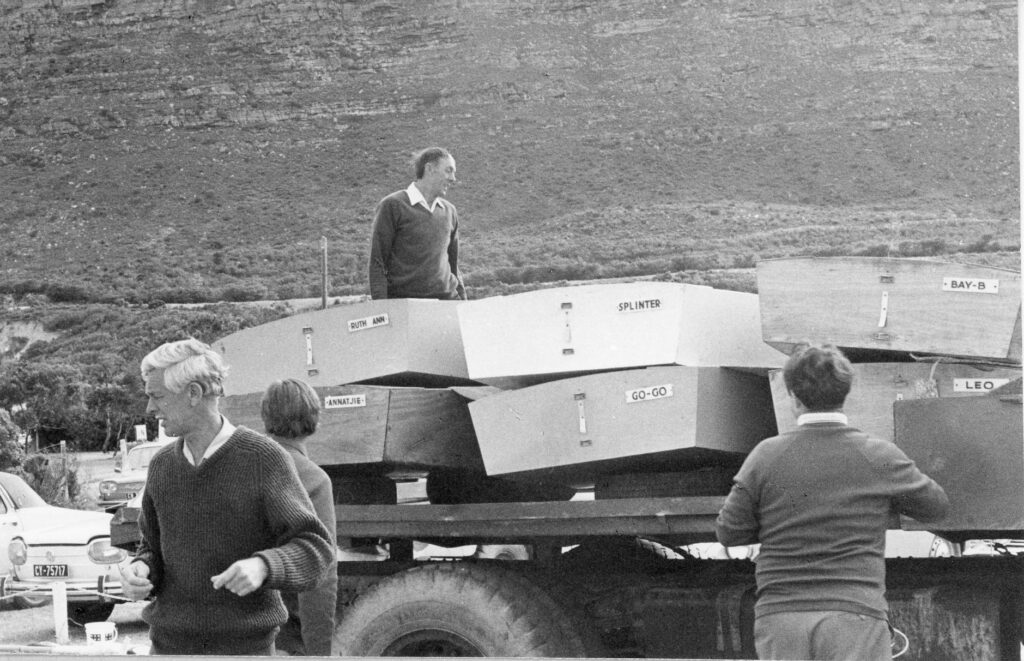 Finn skipper Selwyn Sterling oversees loading of the Worcester fleet for the return to Brandvlei. Selwyn and Jos Hall have taken the fleet on a training programme and may have a winner bybthe next inter-schools. 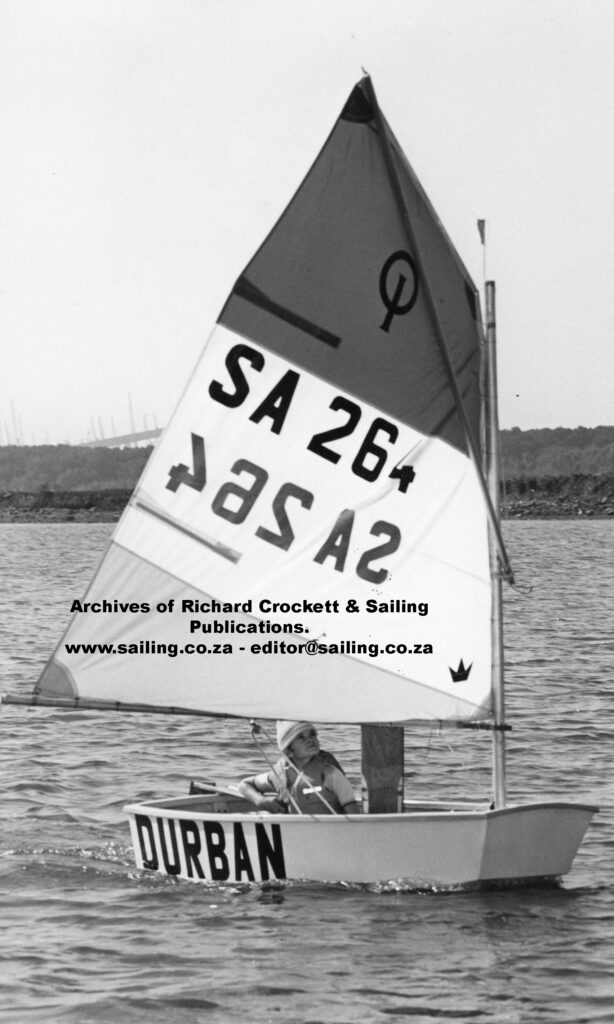 This is one of the Wadsworth brothers, just not sure which one?

There is no caption other than the photographer, Garth Wadsworth, being identified. No doubt one or all of his 3 sons are in this fleet?