I have every good intention of covering the 1971 Cape to Rio race in as much detail as possible as on 16 January next year (2021) the race will celebrate its 50th anniversary, and is due every bit of publicity it receives.

Now this is no simple task as there has been so much written about the race, that the mind boggles at the enormity of this. So what better way than to simply start at the beginning – and how the race was born?

The huge success of the Voortrekker project and Bruce Dalling’s magnificent second place over the line in the 1968 OSTAR race, and his first place overall in that race, turned heads and made South Africans think sailing, think the sea – and dream about their own participation in a home-grown ocean crossing. 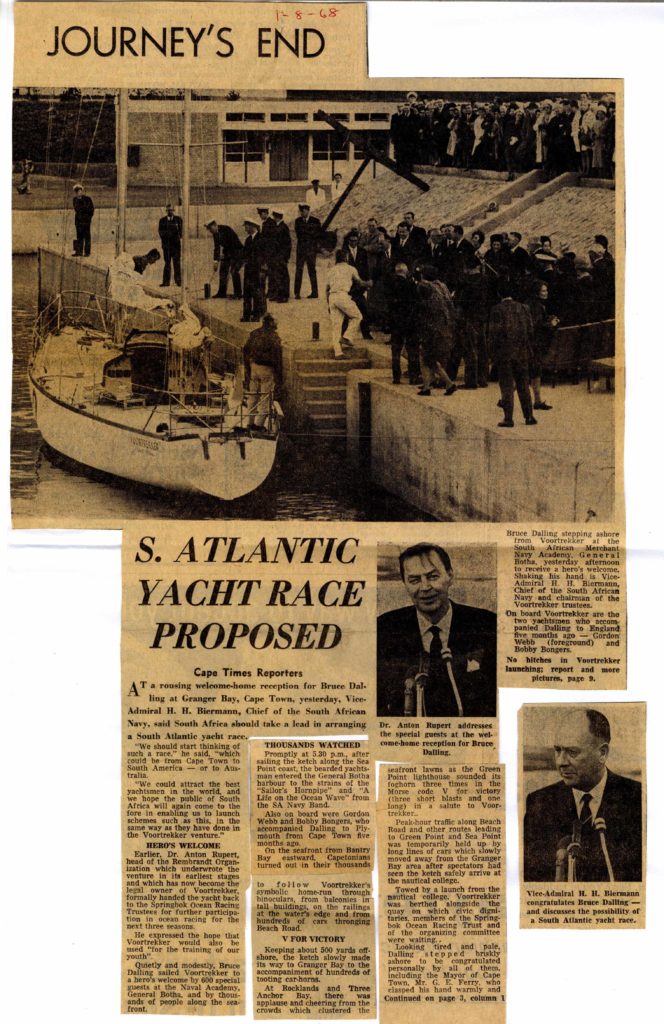 So when Voortrekker and Dalling arrived home back in Cape Town from the OSTAR, at the welcome home function Vice Admiral H H Biermann, in his speech, said “South Africa should take a lead in arranging a South Atlantic race”.

“We should start thinking of such a race” he said, “which could be from Cape Town to South America – or to Australia”.

Robin Knox-Johnston with Leslie Williams and their new Van der Stadt designed Ocean 71, named ‘Ocean Spirit’, were quick to enter too. And then came Eric Tabarly (France) with his schooner-rigged ‘Pen Duick Ill’.

Of course the bulk of the fleet were local South Africans – all with a dream to cross the South Atlantic.

That’s how widely the word was spread, and that’s how positively the sailing world reacted.

From that kernel of an idea from Admiral Biermann, both the South African Ocean Racing Trust (SAORT) and CASA immediately got to work. Ultimately both organisations formed a joint organising committee.

The very first reference I can find to the race comes in some Cruising Association of South Africa (CASA) minutes on 23 October 1968, and was reported verbatim as follows:

“A provisional calendar of national had been agreed upon, largely based on existing Club fixtures.

“The East London/Port Elizabeth race would be included.

“The idea was to establish a national classic by 1971 in which it was planned that at least 6 world class overseas competitors would participate, to be followed by a truly international South Transatlantic Race in which the overseas competitors and at least six newly built South African yachts would join. The object was to establish this race as an internationally recognised bi-annual event.

“Gerald Salaman said success in this programme was largely dependant on ability to get Government assistance in the matters referred to in under heading·3 above. Once this was established it would be necessary to make contact with all racing organizations abroad and publicise the invitation through overseas yachting journals. The Secretary of R O R C had said he would help South Africa in making contacts etc.

“Gordon Webb promised to report back once the calender of races had been finalised and as regards the South Transatlantic Race further investigation of international classics hd established the background on which a firm plan could be based.”

So there it was – the very real possibility of a Cape Town to Rio de Janeiro yacht race – and people eager to make it happen.

The rest is history – and the Cape to Rio Race has not only stood the test of time, but it became a household name too – in this country anyway!