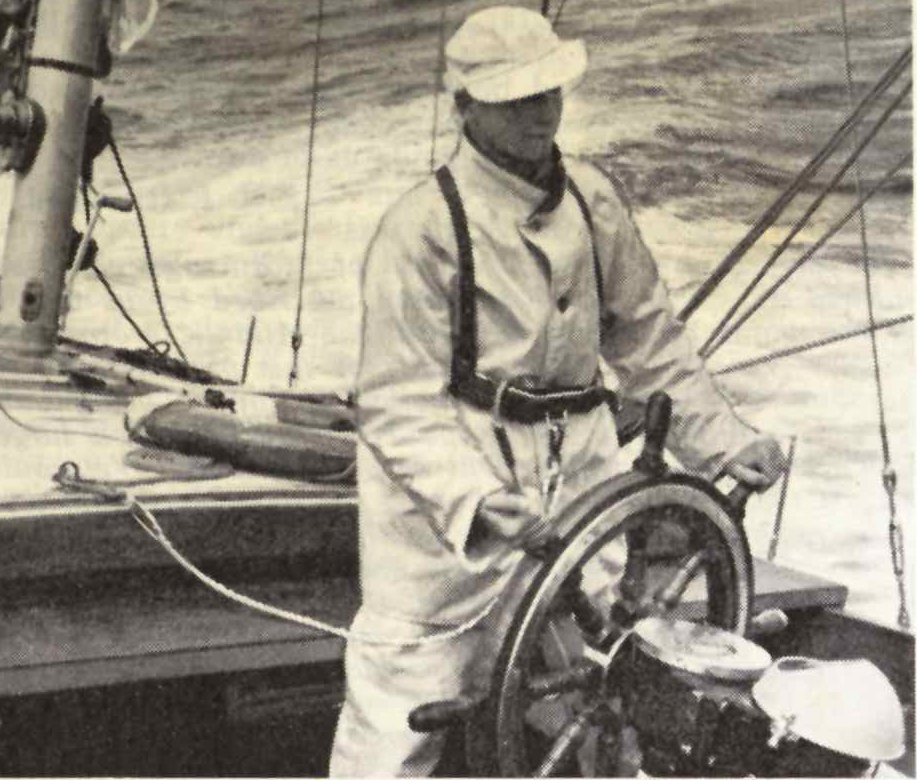 Tyll Pahl wear one of the ship’s safety harnesses while at the wheel in brisk weather.

It does seem incongruous to run an article about ‘Stormvogel’s’ maiden voyage, but such was the excitement about the boat and the fact that she was doing fast passages and won the Fastnet Race, pushed the feature article of her maiden voyage out a few months.

“Flat Out Across the Pacific” is not about ‘Stormvogel’, yet she does get mentioned as one of the new breed of very fast big boats racing at that time. Plus it “fits” here and is very interesting.

“An account of the 73-ft. ketch ‘Ticonderoga’s’ part in the world’s Longest regular ocean race, the 2,200-mile California to Honolulu classic. The writer was one of the ship’s watch-masters and two Royal Cape Yacht Club members, Bjorn Johannsen and Jan Lello, were in the crew.

“The big ketch was out to break the all-time record for the course held by the 120-ft. schooner ‘Morning Star’ – but so was the M-class sloop ‘Sirius II’. Inside the handicap event, then, a great match race, averaging more than 200 miles a day, was sailed between these two . . . Near the end ‘Big Ti’ is seen above flying her black-and-gold spinnakers, plus a version of the clipper’s old “watersail “.

Finally, the headline said “Stormvogel Sails Far and Fast” but hardly does justice to the fact that this was a report about her record-breaking 1200nm Buenos Aires to Rio race record.