There should be nothing special nor untoward about a 220nm ocean race, except of course should the weather turn foul. And with the course from Cape Town to Lamberts Bay and the finish in Saldanha Bay, one then begins to realise that it could be tough as there are several navigation hazards, fog and more to contend with. 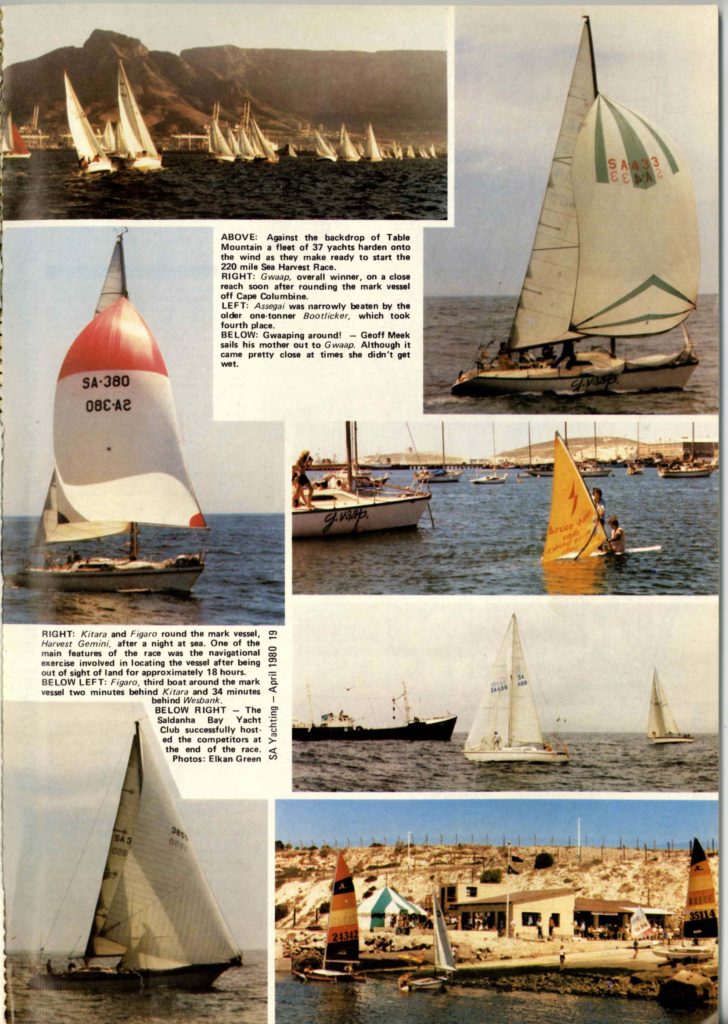 A selection of pics used with the report.

For me though, races back in at that time, this was in February 1980, forced skippers, navigators and crew to sail by the seat of their pants, using their training and experience, navigating the traditional way, and having little insight into what the weather may bring – other than what could be gleaned from a synoptic chart.

That never worried the competitors, as this was ocean racing after all, and one simply had to take the rough with the smooth. Today it’s all different as competitors want to have it “smooth” all the way, with any hint of bad weather showing up on the long range forecasts forcing organisers to shorten the course or worse postpone the race.

Sad that as back in the day one had a very real feeling of accomplishment should conditions have forcced one to “vasbyt”. But we now live in modern times, and the game is played very differently. Don’t get me started…!

I remember talking to a singlehanded round-the-worlder many years ago, and asking him what made him do it. As quick as a flash he came back with: “It’s a bit like walking around with a stone in your shoe – once you take it out it feels really good!”

Well that’s how I often felt at the end of a tough ocean race.

So back to the race. Conditions were on the light side and navigation was difficult – as will be revealed in the report..

And the author of the report, kept reminding us that the crew was made up of “the musician, the chemist, the boatbuilder, the sailmaker and the journalist and they sailed this boat ‘Kitara’ and, after a good start, got becalmed off Robben Island.” Yet they finished second.

This is another wonderfully delightful read.

Back in the day before computers, results were hand written on “spreadsheets” like this one.
This image has been digitally stitched together from several sheets of paper.