Daily I get pleasure when working in my archives as I often come across reports that I knew existed, and have found difficult to find. But all that’s changing as I continue my archiving quest.

In the 1985 South Atlantic Race to Uruguay official brochure, I found a spread of three articles written by well-know sailors who had experienced the might of the South Atlantic, and had shared their experiences of those return passages after the 1982 race. 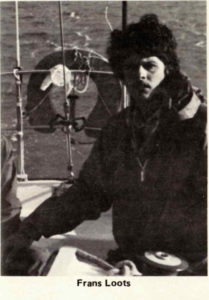 The first is Frans Loots who sailed the Petersen 33 – ‘Checkers Hyper’ – singlehanded back from Uruguay to Port Elizabeth. He encountered several gales, the strongest being 50 knots! 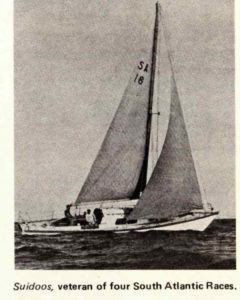 Dave Elcock brought ‘Suidoos’ back from Uruguay, and he too experienced the tough South Atlantic and winds up to 50 knots accompanied by massive seas.

Bertie Reed sailed ‘Voortrekker II’ back as well, encountering winds of 50 – 60 knots, and a freak wave which “threw the boat over rather violently”. This storm lasted 40 hours!

I am not going to give additional info as I usually do, as these are important enough reports to be read slowly and carefully – and all the while “inwardly digesting”!