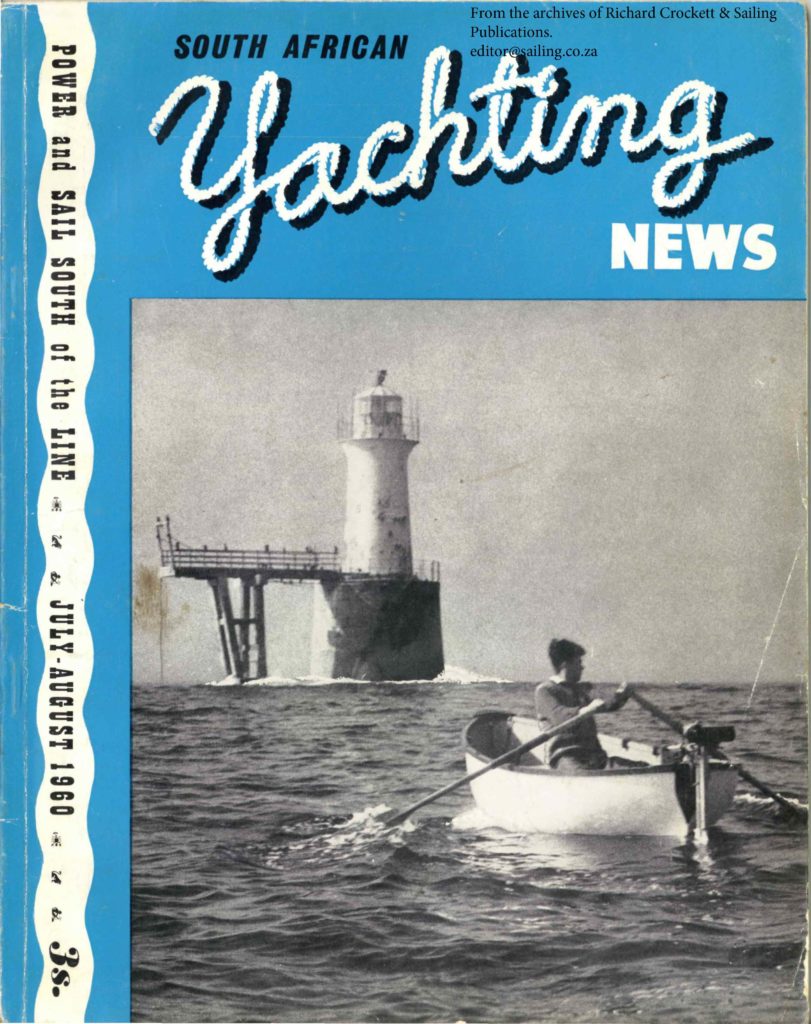 July-August 1960 issue.
The cover pic caption read as follows:
In its element, the Yachting News 1O-ft. utility – Stephen Flesch at the oars – looks for a fishing spot off Roman Rock lighthouse in False Bay in the Cape. It is the smallest really seaworthy dinghy available.

by Richard Crockett
(As you can see, this section from the archives will now be under the “Talking Sailing” banner.)

At about the same time as this article on Roman Rock Lighthouse in False Bay was published by Africa Ports & Shipping, I was digitising the July-August 1960 issue of SA Yachting. The cover of that issue depicted this lighthouse with a dinghy being rowed out towards it. And at a similar time I stumbled upon the original B/W print of that scene.

So quite naturally there was a perfect fit between that 1960 magazine, the picture and this article in Africa Ports & Shipping. 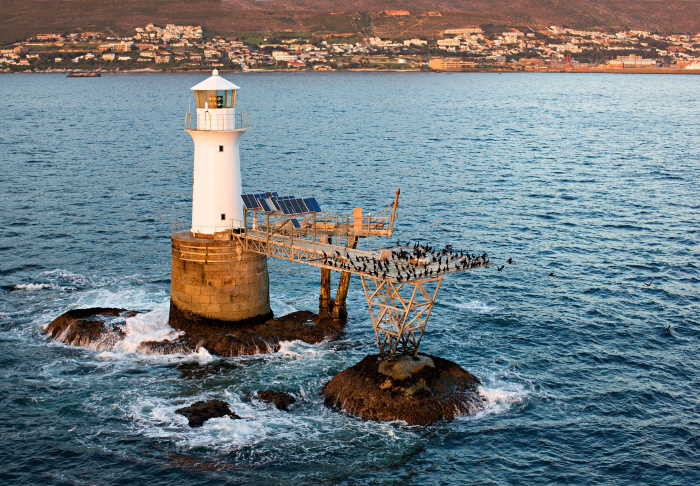 Roman Rock Lighthouse
The Roman Rock Lighthouse, situated in False Bay, celebrates 159 years of service this Heritage Month (September). The lighthouse – the fifth oldest in South Africa, and the only one that has been erected on a rock that is awash almost continuously at high water – was first lit on the night of 16 September 1861. 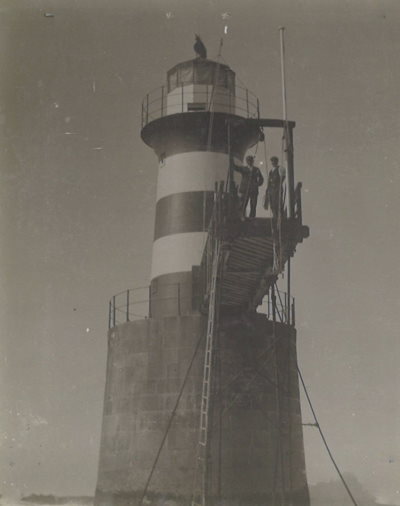 The 14-metre circular cast-iron tower is painted white with a white lantern house. The optic produces one flash every 6 seconds with a range of 20 nautical miles and is powered by a solar photovoltaic system.

The lighthouse is made of cast-iron segments bolted together, and a deep circular trench had to be cut in the rock for the foundation. It took four years to complete the installation, as only 962 hours could be spent on the rock due to the rough seas, bad weather and the fact that the rock is accessible only at low tide in calm water. 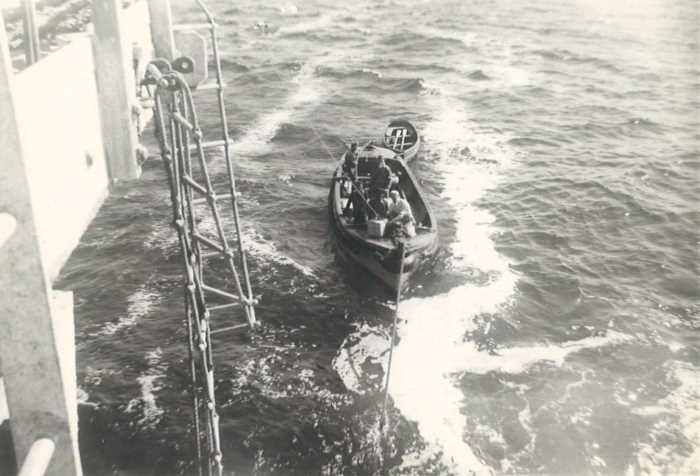 Before the introduction of helicopters in the 1960s, lightkeepers would have to row across False Bay and use a rope ladder to access the tower.
(TNPA Archives).

The original optic consisted of eight single-wick burners set in silvered metallic reflectors, that provided a white flash that was visible for twelve miles. It was rotated by a weight-driven machine, which was manually operated.

Two men were on duty at a time, with a relief crew ashore. Crews were changed every week, weather permitting, and were required to take with them oil to power the light, as well as food and water for cooking and hygiene requirements. 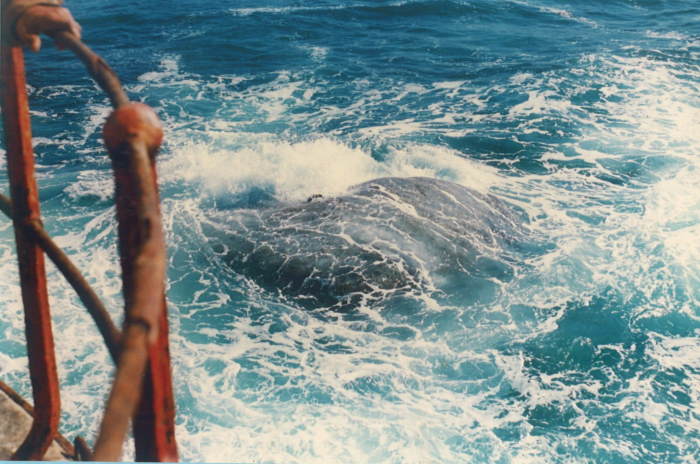 The rock atop which the stainless-steel tower and helipad was mounted in 1994.
(TNPA Archives).

Transport between the shore and the lighthouse was by means of a small row boat, and later by motor boat. Helicopters were introduced in the 1960s, and the protruding gangway was used as a platform onto which the visiting technical personnel and equipment were lowered.

The lighthouse became fully automatic on 25 March 1919, with the installation of an acetylene gas apparatus that was controlled by a sun-valve. The gas accumulators were replenished every six months, and a staff presence was no longer required at the lighthouse. 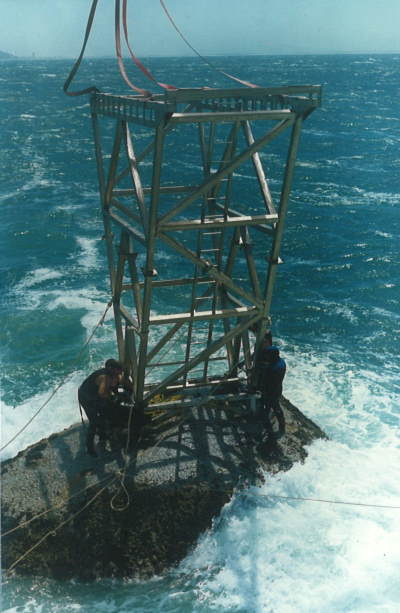 A helicopter was used to transport the stainless-steel structure from the Simon’s Town naval yard to the rock.
(TNPA Archives).

A decision was taken to electrify the light, to increase its intensity to make it more visible against the growing background illumination. A wind-driven generator was initially proposed, but was abandoned due to serious mechanical damage discovered during the trial at nearby Cape Point Lighthouse.

The alternative was to obtain electric power from the local municipality by means of a submarine cable, with a small diesel generator to provide emergency supply if the cable was damaged. The improved light, together with a new lantern house with a glass reinforced plastic design, was commissioned on 5 March 1992.

The submarine cable was damaged more than once, and the protruding gangway at the lighthouse had corroded to such an extent that it became a safety hazard. In 1994, a helipad was installed on top of a freestanding stainless-steel tower on a separate protruding rock, and solar power replaced the mains supply. The solar modules were mounted on the 13-metre walkway linking the lighthouse and the helipad. 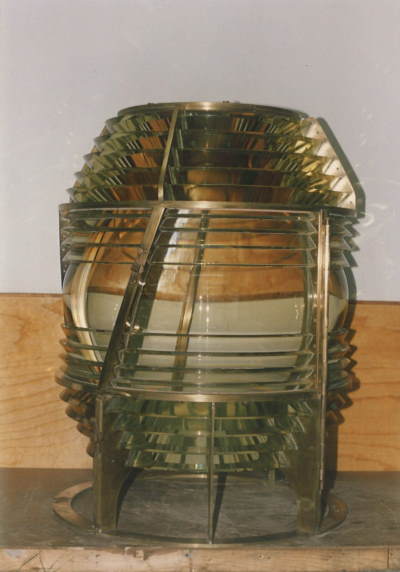 The acetylene gas lens that was replaced on 5 March 1992, was donated to the Simons Town Museum.
(TNPA Archives).

This unique lighthouse is one of 45 operational lighthouses along the coast of South Africa, from Port Nolloth on the West Coast to Sodwana Bay on the East Coast. Transnet National Ports Authority (TNPA), through its Lighthouse and Navigational Systems business unit, is mandated by the National Ports Act No 12 of 2005 to provide, operate and maintain lighthouses and other Marine Aids to Navigation (AtoNs) along South Africa’s coastline.

The above article is reproduced with the permission of Africa Ports & Shipping (www.africaports.co.za)