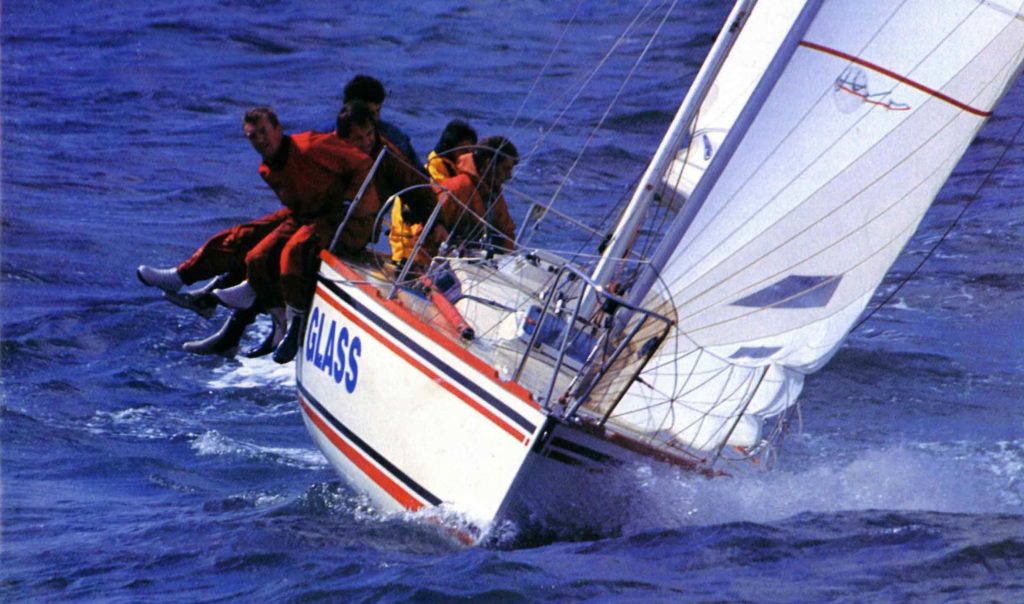 Africa Glass with Geoff Meek and Martin Schultz as co-skippers.

The 1992 to 1994 Lipton Cup was sailed in Saldanha Bay, the venue for this years challenge, so when that was announced I used the three reports on those races at that time as a preview to the venue. To view them scroll back to 11, 14 & 15 June 2021 when they were posted.

So back to 1996 when the RCYC won it and brought the racing back to Table Bay.

This was from all accounts a tough and at times acrimonious series with a protest against the overall leaders in the final race – and one which could have determined the winner. Plus there were other protests running late into the night!

SA Yachting magazine had this to say: “The Lipton Cup has never been an easy regatta to win and this time it seemed all the more difficult. The move to a new venue always breathes life into the challenge and this year in particular there were few of South Africa’s top sailors who did not attend. Given this the stunning win by Geoff Meek sailing for HYC (Hermanus) looked so much more impressive considering the caliber of the names further down the score sheet.

“Any young up and coming sailor had to think again if he thought he was racing the “has beens”. The same people who have dominated the top league of keelboat sailing for so many years were again at the top and showing no sign of slowing down. Geoff Meek, Chris King, Rick Nankin, Dave Hudson and Greg Davis; well, if you haven’t heard those names before you haven’t been sailing around here for long.

“Meek’s challenge from Hermanus looked cool, efficient and organised well before the regatta started and when the regatta kicked off they certainly impressed with two comfortable wins in as many races. Thereafter they never lost the overall lead. For both Meek and the club it was their second Lipton Cup win. Meek last won in 1983 and Hermanus in 1969. However what really made this regatta unique for Geoff Meek was that he actually seemed to be enjoying himself. After the second race he commented, “It was the most potent race I have ever sailed in this country.””

SAILING Inland & Offshore magazine opened their coverage with these words: “‘Africa Glass’s’ co-skippers in Geoff Meek and Martin Schultz were made to sweat on the evening of the final day of the 1996 Lipton Cup Challenge, before the Protest Committee dismissed a strongly-presented protest from Jan Reuvers’ Hout Bay Yacht Club crew, after a four-hour sitting, before the Hermanus team could allow the bubbly to flow.

“Fair is fair. ‘Africa Glass’ deserved their win, having taken line honours in three of the six stages. For the defending champions, ‘MBS Challenger’ of the Royal Cape Yacht Club, it was not to be, while it was a case of so near, but yet so far for six-times winners Chris King and Rick Nankin, aboard the False Bay Yacht Club entry ‘Dalys Insurance’, who ended second overall.”

To read all the nitty-gritty you will need to follow these links: