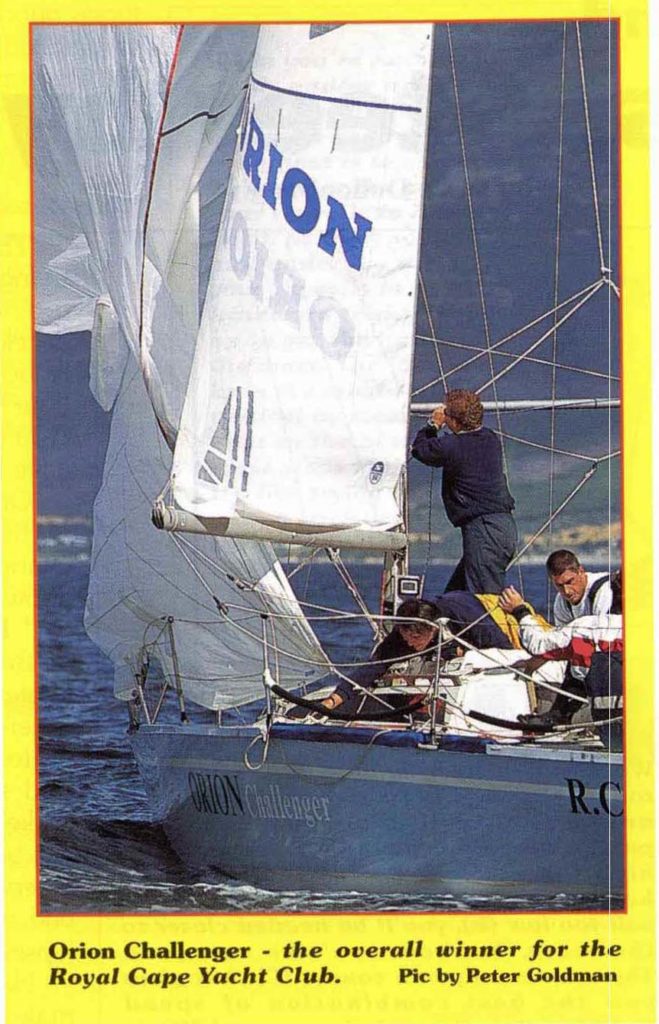 This was another of those Liptons where the weather layed a crucial role in not permitting the full compliment of 5 races to be sailed, yet the winner was convincing and deserving of lifting the coveted Lipton Cup.

Andrew Heathcote reported on the event.

The 2000 Lipton Cup Regatta hosted by the False Bay Yacht Club in Simonstown was a mixed regatta with both high and low points. A fantastic venue and a strong fleet representing 26 yacht clubs from around the country had all the makings for a great regatta. Unfortunately though the weather did not come to the party putting a slight dampner on what was otherwise a great event.

Things started off on a very good note with competitors taking part in a parade down the main street of Simonstown on Saturday 5 August, led by a navy band. Traffic in the main street was brought to a standstill while the team members from each of the competing yacht clubs marched down the street. A member of each team carried the club’s burgee on a flagpole adding to the spectacle. The parade ended in the Town Square where the mixing of the waters ceremony took place. No fewer than four Admirals of the navy were in attendance. This sort of relatively high profile activity can only be good for the profile of our sport and in raising public awareness of what we are up to.

The intention was to start racing early on the final day of the regatta and try and get in two races on the ex-Olympic Triangle sausage course. However the navy were undertaking a test firing of some of their guns mounted on the harbour wall preventing the fleet from leaving the harbour before ten. One race was sailed in a light Westerly wind and on the flattest of flat water. The Mountain Yacht Club entry ‘Abraxas Technologies’ skippered by Derick Warne sailed an outstanding race to lead from start to finish scoring a fantastic win in the last race of the series.

‘Orion Challenger’ however wrapped up the series by coming home in a comfortable fifth place with their rivals from Theewaters in third place, leaving them second overall. Third overall in by far the strongest showing from a KZN boat in a number of years was ‘Parental Guidance’.

At the end of the day the ‘Orion’ team thoroughly deserved their win. On the water there was little to choose between them and the Theewaters team and the rest of the fleet still has some work to do in order to reach their level.