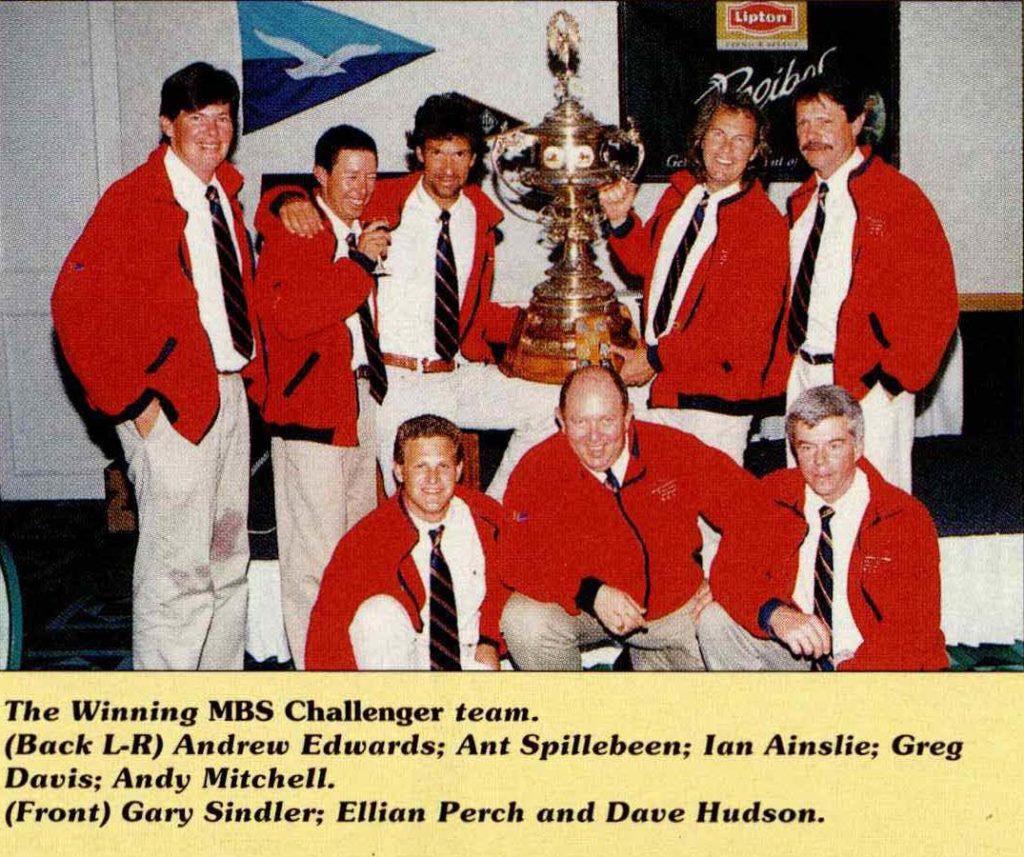 “Lipton Cup Upset” shouted the headline in SA Yachting magazine as gear failure put the defenders, Hermanus Yacht Cub, out of the running, but the pressure from RCYC was there from race one.

Gordon’s Bay was the venue, and the first time the Lipton Cup had been sailed from there, but as Bruce Keen, reporting for SA Yachting said: “although there are some sailors who will argue that we raced closer to Simon’s Town than to Gordon’s Bay. The first race was 9 nautical miles from Gordon’s Bay!”

The venue put all sailors on even ground as there was no one with superior local knowledge. The weather played a huge role in this event as it quickly became apparent, due to weather disruptions which disallowed three days of racing, that there was the possibility of a non-event. This was prevented when the final day saw the equilateral triangular course sailed, with an additional race immediately after – so four races were eventually counted.

With a 2nd in the first race and three 1st places in the final three races, the RCYC ‘MBS Challenger’ team emerged as the convincing winners.

Bruce Savage writing for SAILING Mag said: “Friday was to be the day that proved the worth of the number 2 genoa in the L26 inventory as a 25 to 30 knot North Westerly set in for the final day’s racing. Race three would be the equilateral triangle and would spell the end of the regatta for two of the top teams. ‘Dalys’ mistimed their Vanderbijlt style start by three minutes after a sail change had positioned them a little far from the line. ‘MBS’ and ‘Africa Glass’ headed out to the left in a private race. Meek had gained the better start but ‘MBS’ had better speed. ‘Maxtec’ arrived at the weather mark first with Reuvers again showing good speed in the big breeze and taking advantage of the favoured right hand side of the beat. ‘MBS’ was up there, but where was Meek? In the quest for extra speed to match ‘MBS they had put on a little too much kicker tension exposing a fault in the boom. The Hermanus defence was over.”