“Talking Sailing” From My Archives. Random Vasco Pics From Yesteryear 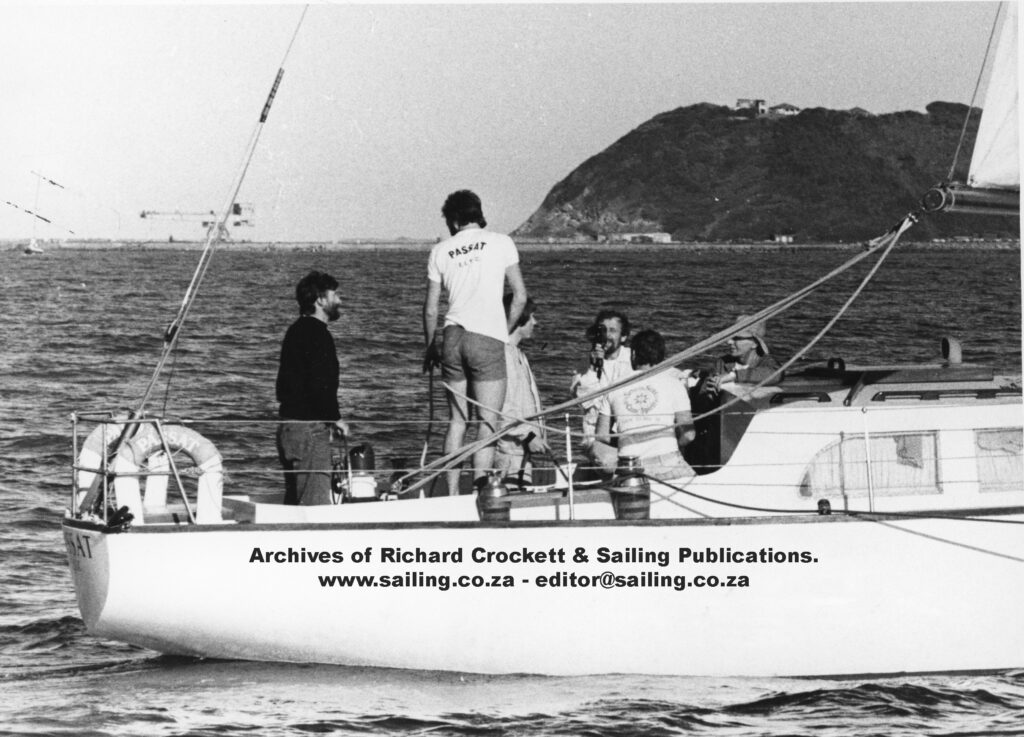 1977 Vasco. the 39-foot Hartley designed Passat skippered by Siggy Eicholz at the helm while waiting for the gun off Durban at the start of the 1977 Vasco da Gama race.
The East London yacht won the race in 40 hours and 15 minutes, six hours ahead of their nearest rival Sea Jade skippered by Dick Jones.

As the 51st Vasco da Gama yacht race starts on Sunday, I dug into my archives and selected all the pics I have not yet scanned, and have begun that arduous task so that I can share images of the races, boats and people of yesteryear.

And believe me there are some interesting images shared today, and lots more to come too.

I have purposely just placed all images in a pile and started scanning them, so there is no order nor preference of choice – just as they get scanned from the pile.

Please assist by helping to identify some of the “unknown” people, the year and any other pertinent information.

The images brought back some good memories for me as I really enjoyed the Vasco race, whatever the weather. The three pics of the 1983 race when I was aboard ‘Assegai’ with Terry Clarence as skipper brought back vivid memories. It was a strange race in many respects as the wind simply did weird things. Besides racing the first 12 hours in 20 to 25 knots, to being clubbed by a massive storm which tore the fleet to shreds for 30 minutes before abating, and being becalmed, we had it all. On Assegai we sat in the eye of the storm, becalmed and with fierce lightning all around us. Late on Friday afternoon we limped along slowly in no wind at all, down to just 1 knot off Bashee, and continued that way almost to the finish line. I distinctly remember seeing East London as the sun rose and clearly remember thinking that we were too far out. Try as we may it became a battle of wits to eke out boat speed, and height into the coast to avoid being swept past the finish line by the current.

This was one of the slowest races on record with our elapsed time being just shy of 48 hours.

We took line honours some 7+ hours ahead of the next boat where just 9 minutes separated second and fifth places over the line. What an exciting finish for those five yachts, being ‘Lady Shamrock’; ‘Magic Carpet; ‘Shaya Moya’; ‘Rubicon’ and ‘Gunnadoo’.

To me one of the most interesting images is taken of Noddy Cooper holding the Stateline Navex Trophy. He won the trophy the previous year to this pic being taken, and to my knowledge that trophy has been missing since about then. Should anyone know of its whereabouts, please make contact. 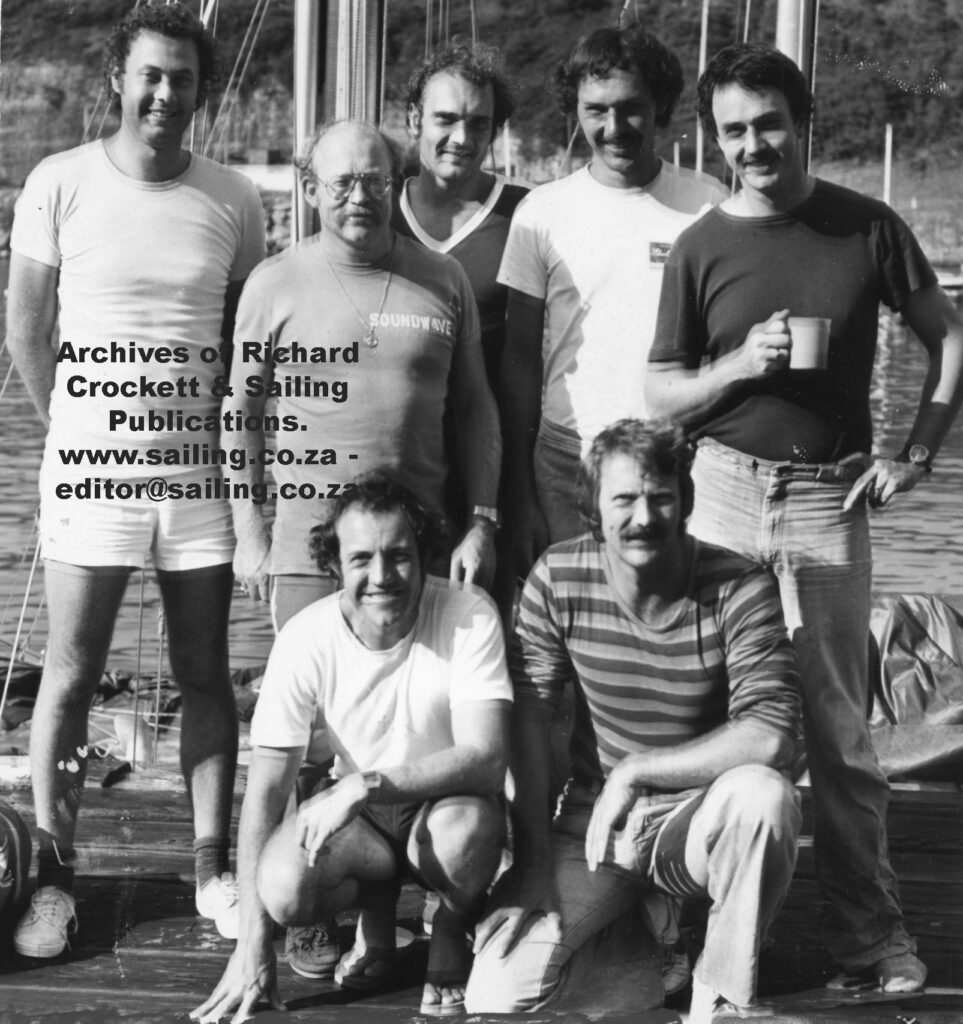 The crew of Soundwave in either the 1978 or 1979 Vasco race. She won both those races under skipper Neil Bailey.
L-R back. unknown; Neil Bailey; Gerd Rahmer; unknown; Tim Wade-Lehman;.
L-R front. Jannie Otto & Peter Rens. 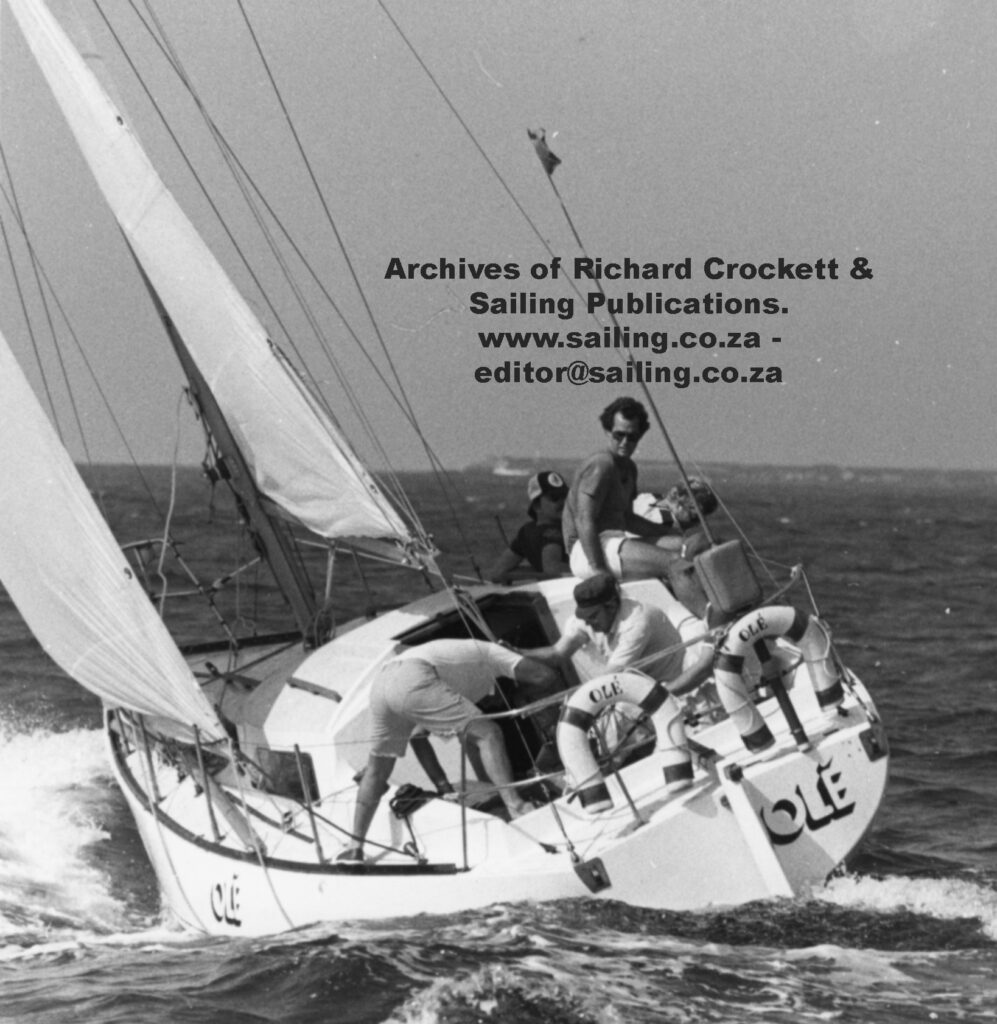 The Miura Ole skippered by Tim Wade-Lehman. This was at the start of the 1983 Vasco da Gama Race. pic by Mike Rushworth 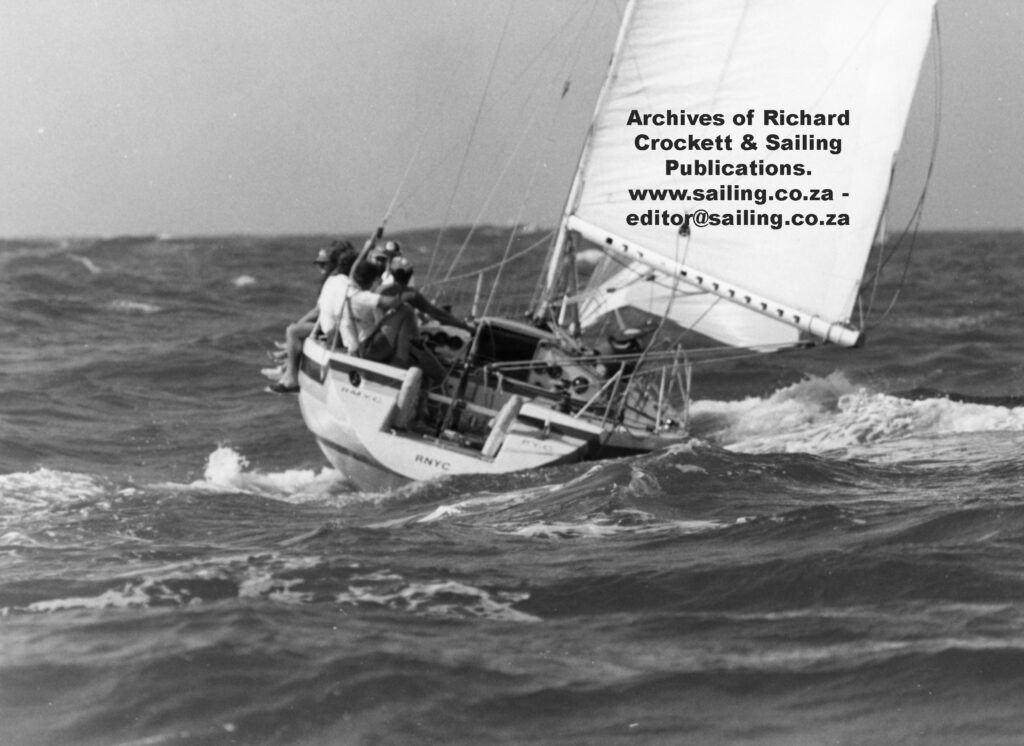 1983 Vasco. The caption as written by photographer Mike Rushworth says “out on the weather rail are the crew of Assegai heading for East London after a bad start”.
I vaguely remember we had some engine problems while leaving harbour and had to sort those out – hence the poor start. 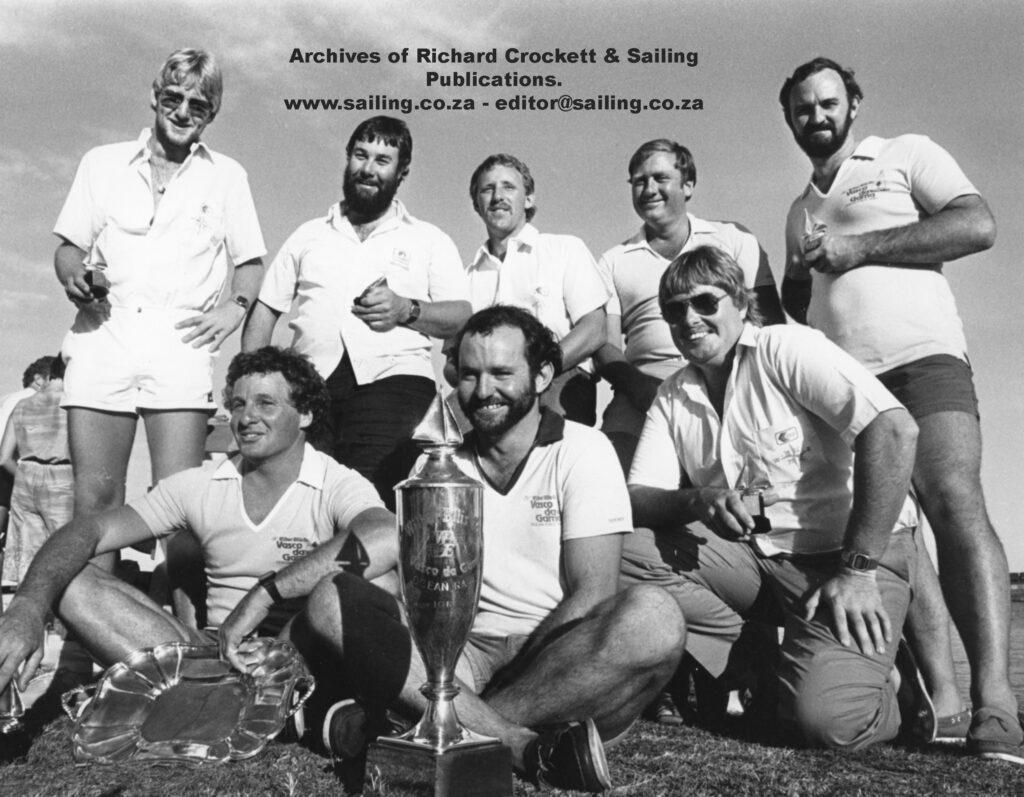 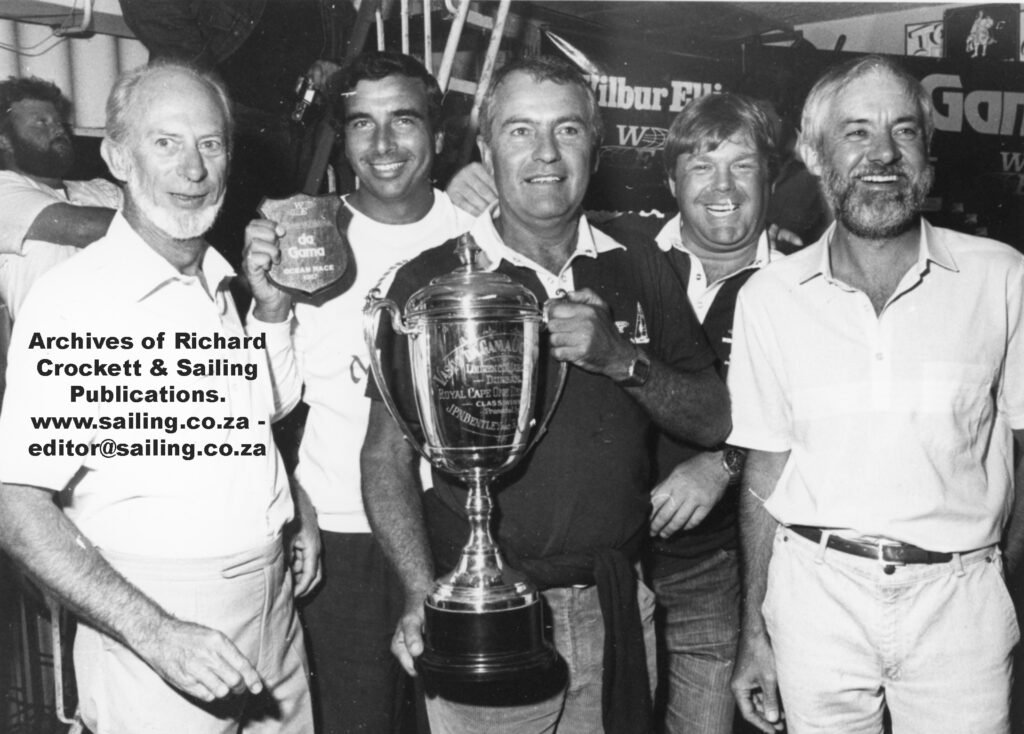 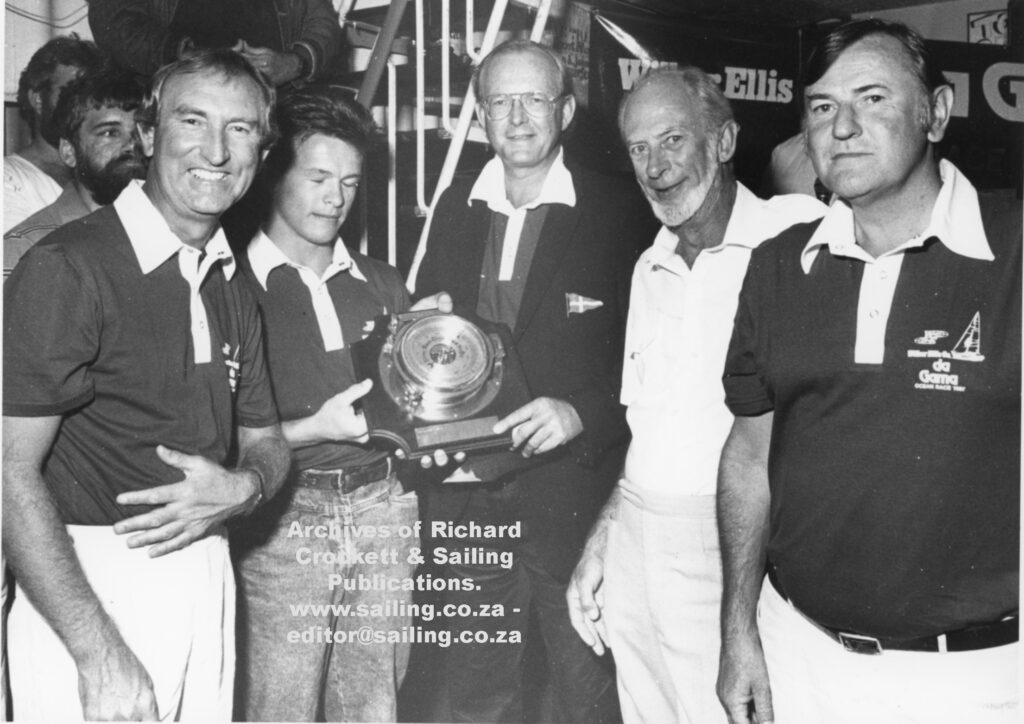 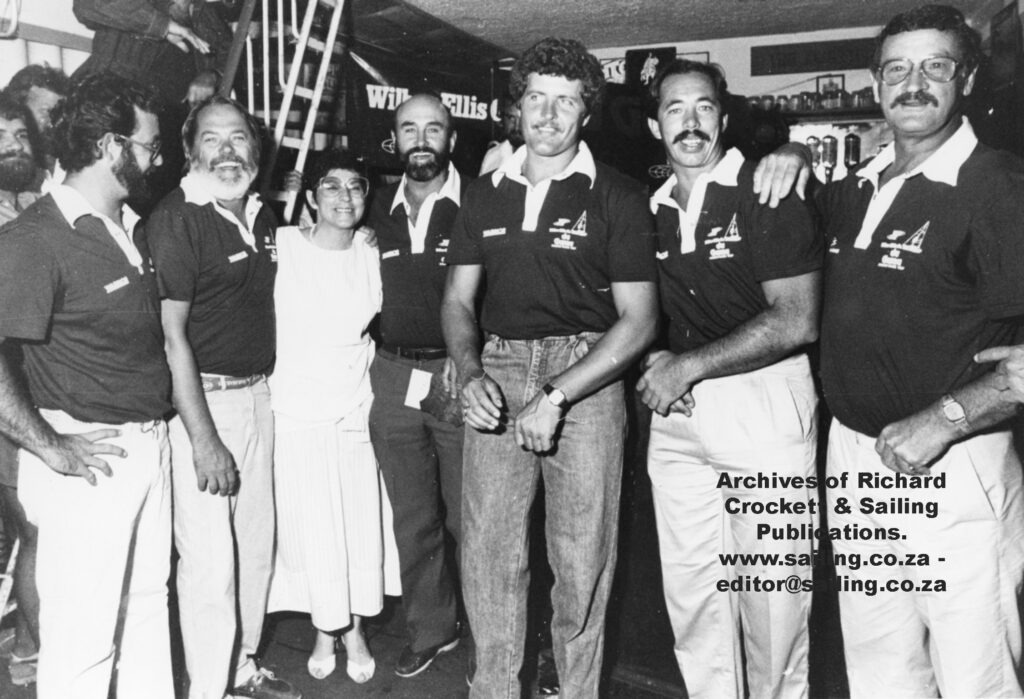 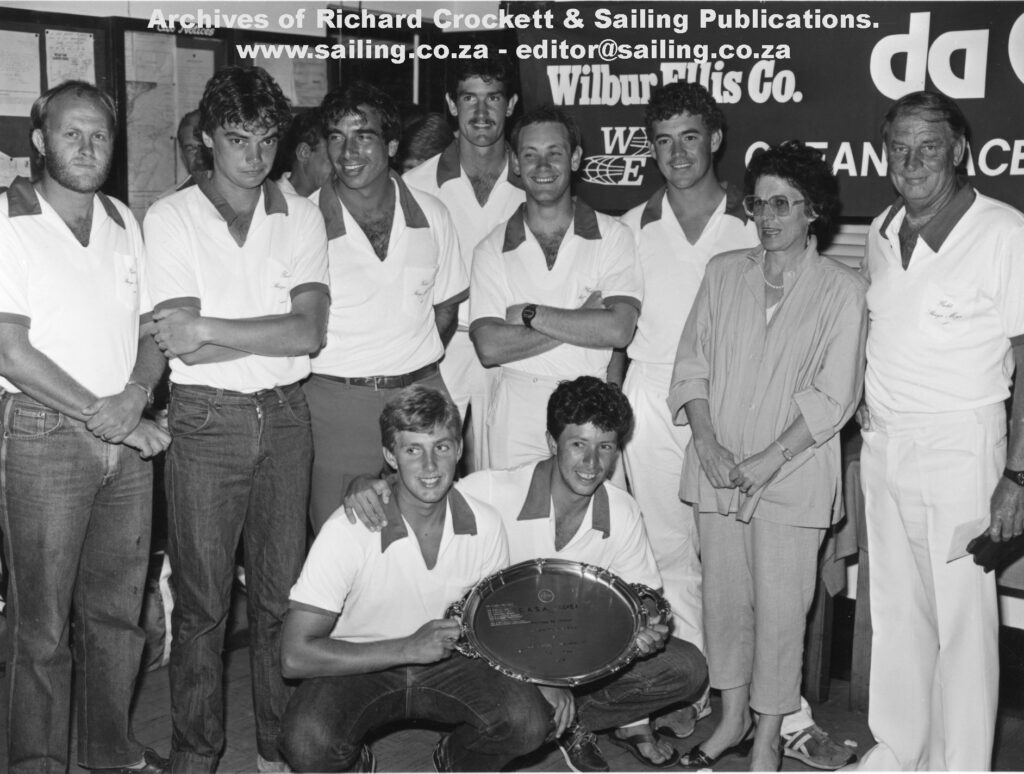 The crew of Shaya Moya which was skippered by BRian Tocknell and crew predominantly by defence force personnel doing their national service.
L-R. Glen Saunders; Steve Rogers; Chris Binnington; unknown; Dave Heath; Jimmy Melville; Nancy Pierce-Jones of the sponsors; Brian Tocknell.
Front. Neil Tocknell & Ant Spillebeen.
I don’t have the year, although I am sure the bright boys in that crew know it by heart? 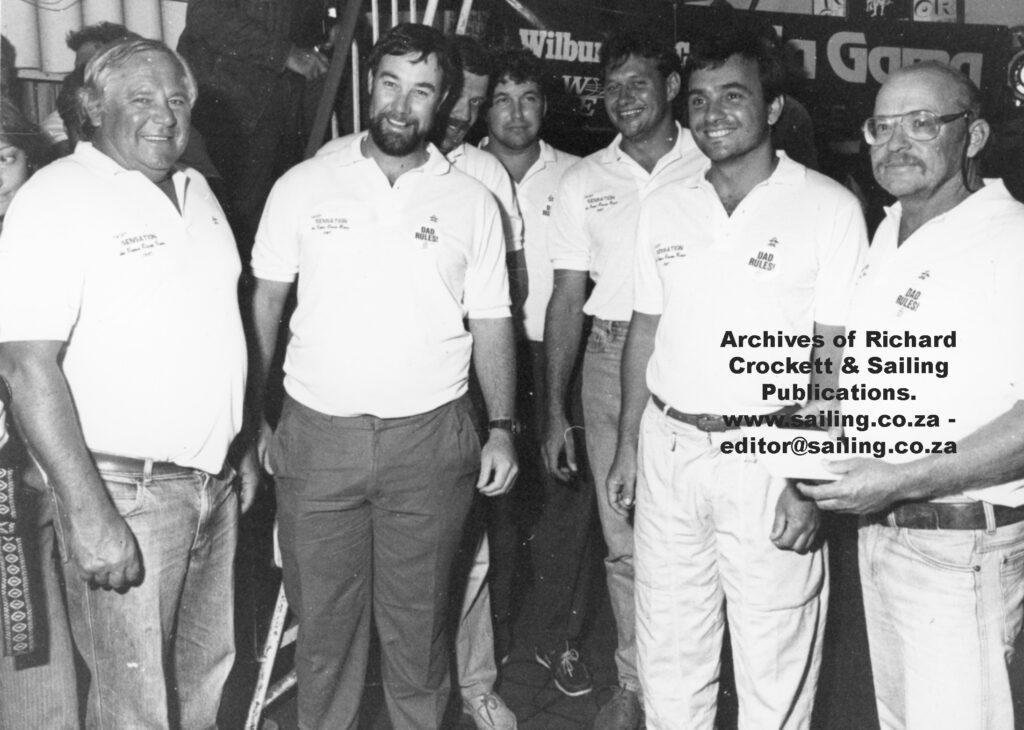 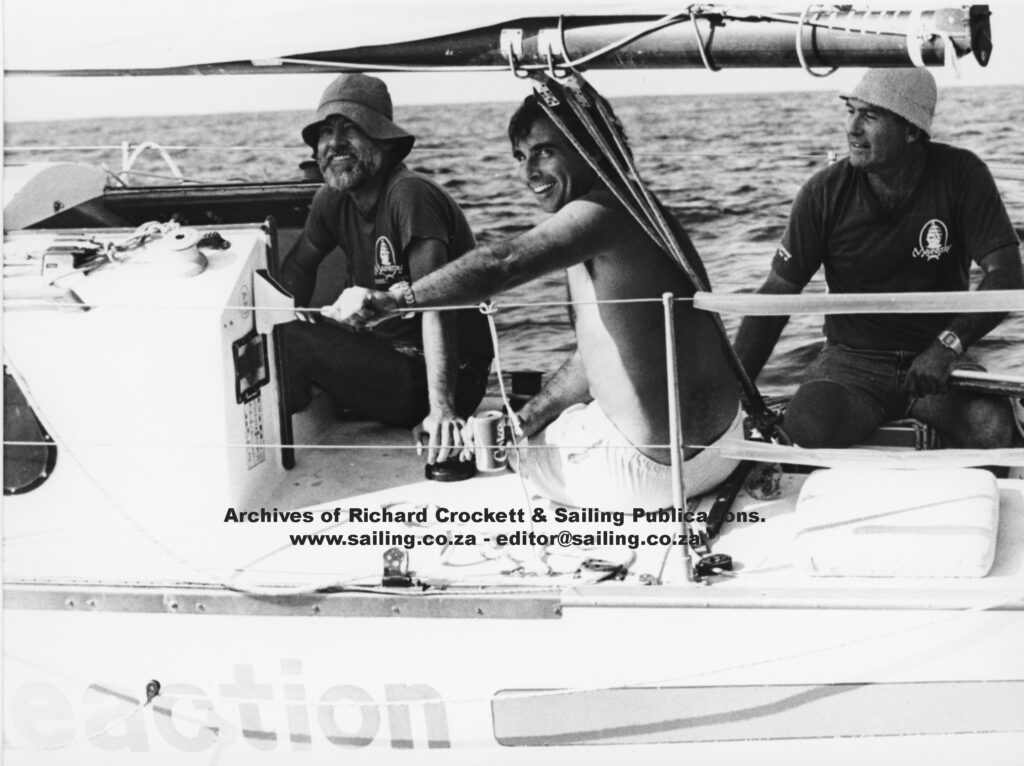 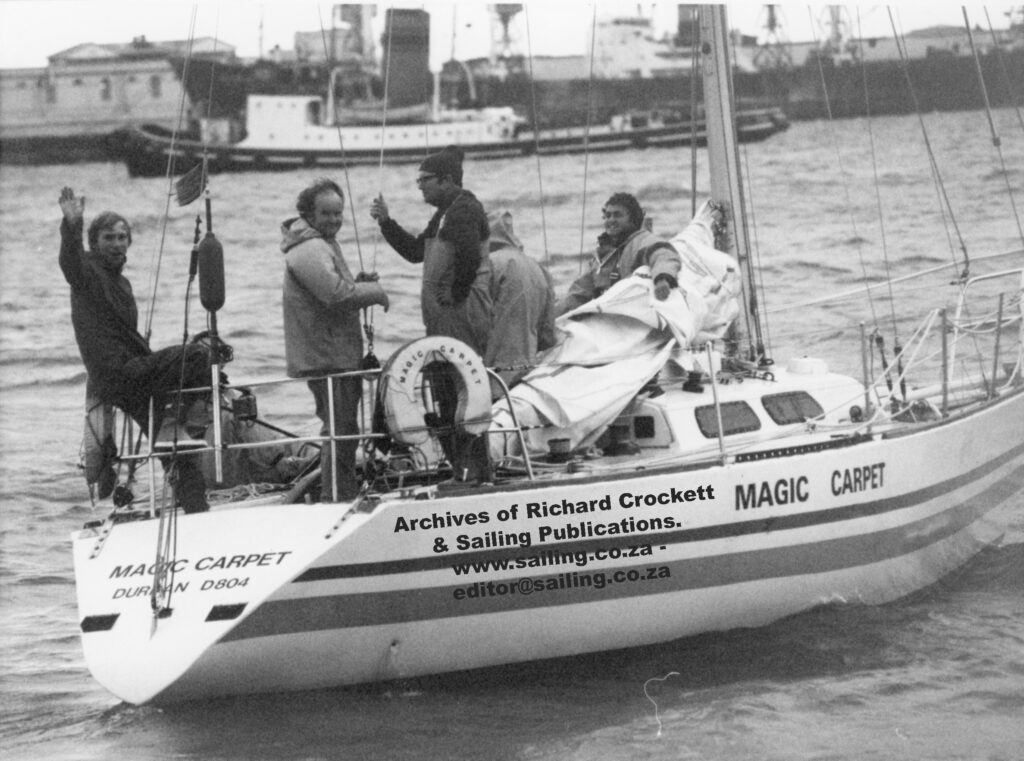 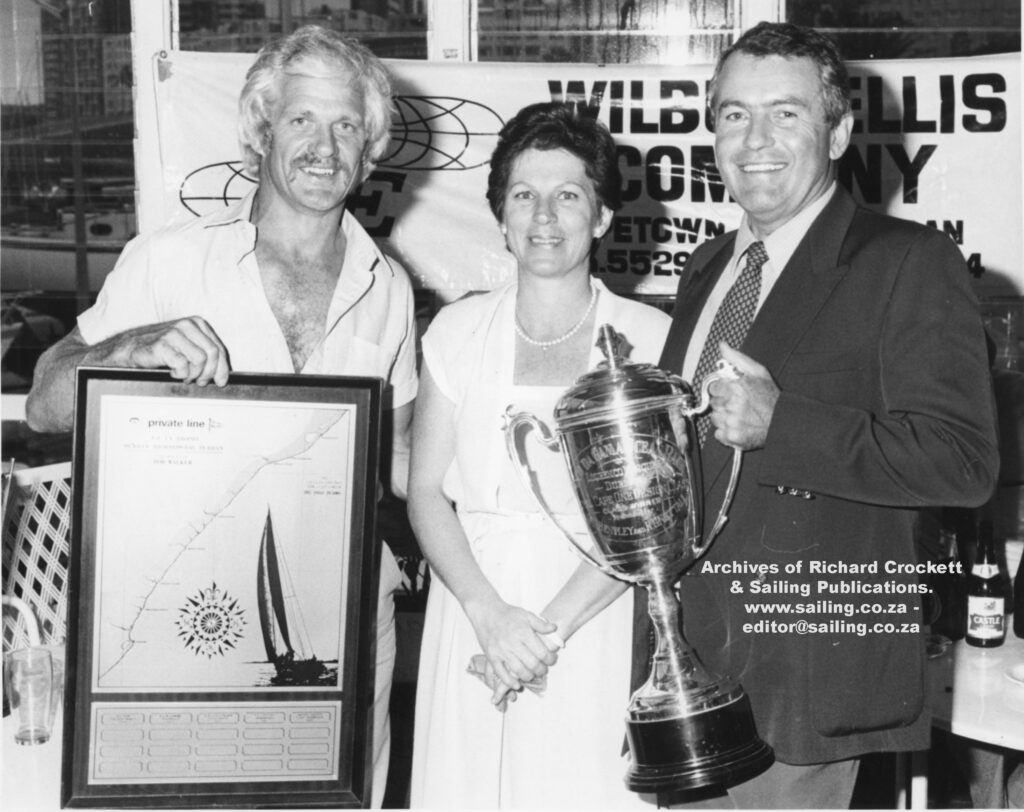 This is an interesting pic taken at the farewell function before the start. On the left is Noddy Cooper holding the Private Line Navex trophy – which has gone missing and not been seen for many years, possibly since this pic was taken. Should anyone know of its whereabout, please make contact.
On the right is Andrew Lawrence holding the Bentley Nuttall RCOD trophy which he won the previous year sailing Gunnadoo.
In the middle is Nancy Pierce-Jones of Wilbur Ellis.
pic by Mike Rushworth 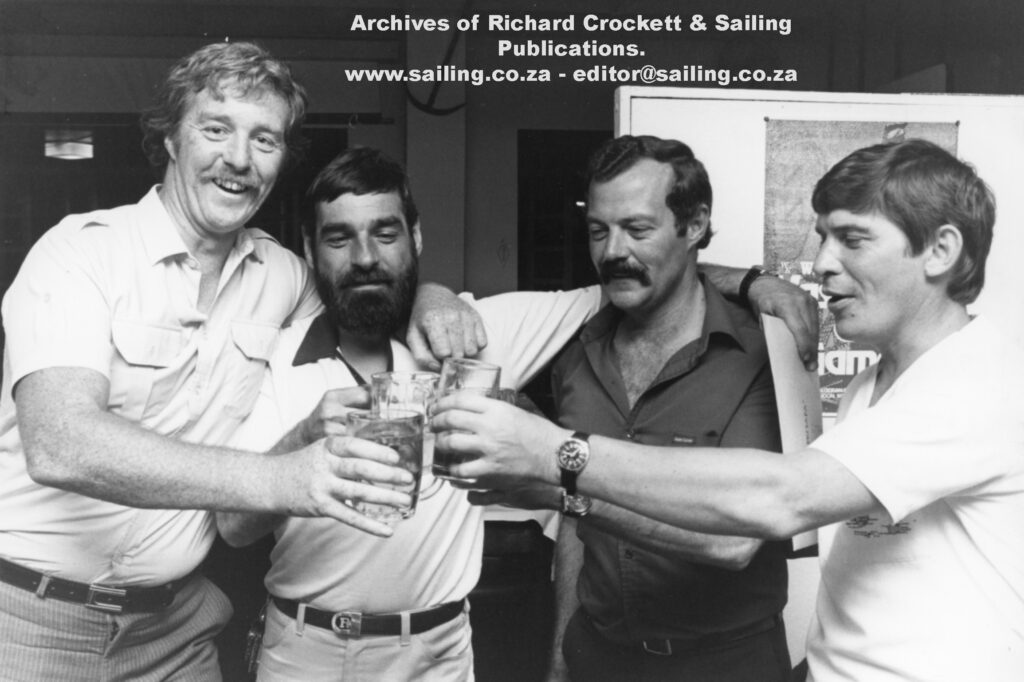 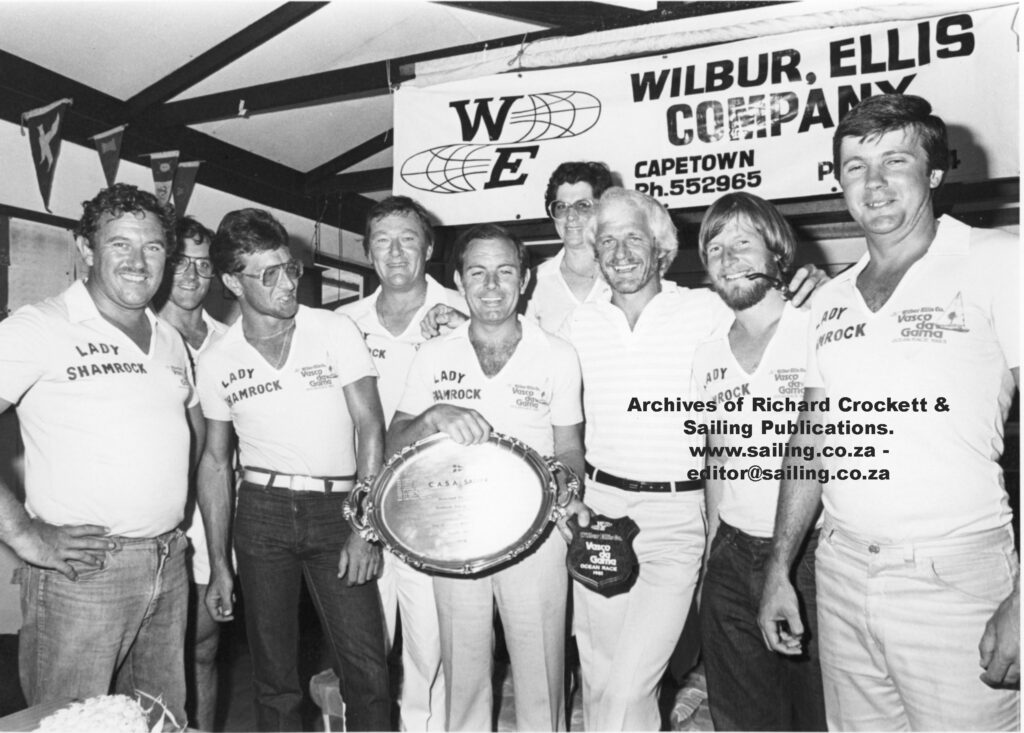 The crew of Lady Shamrock who took line honours in Class A. Her woner, George Morgan is holding the trophy. pic by Mike Rushworth 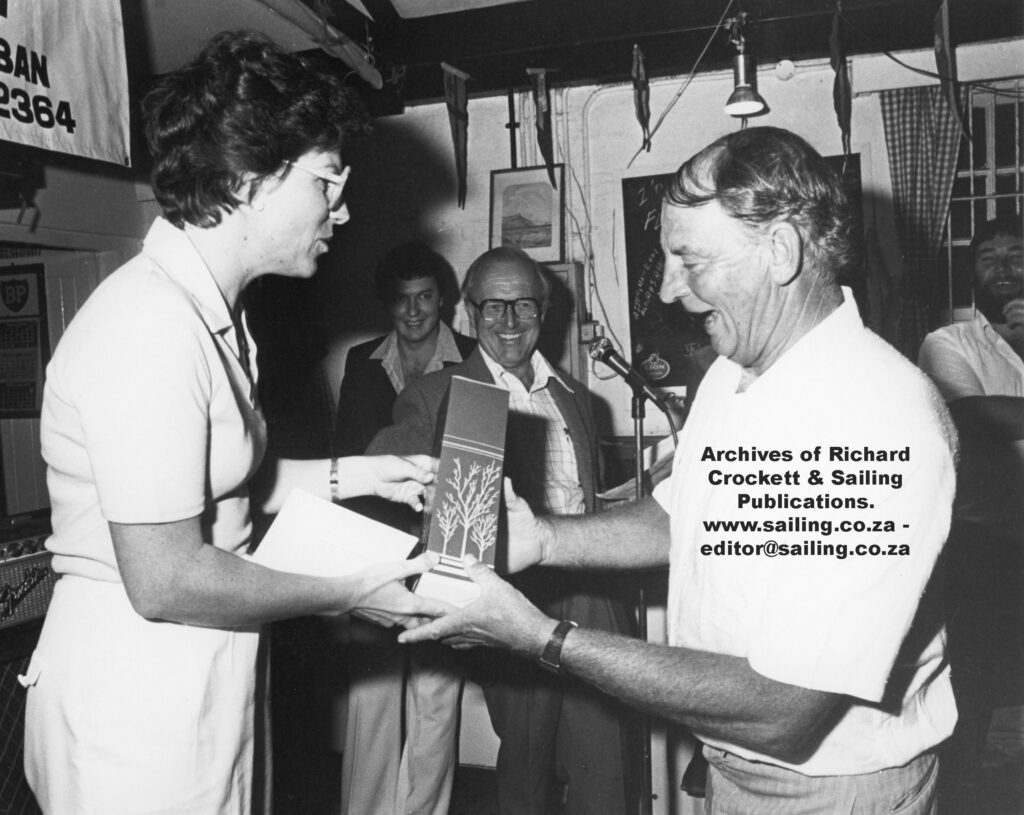 Brian Tocknell, a Vasco Race stalwart, receiving a prize from Nancy Pierce-Jones. In the Background with the spectales is John Bentley who was one of the donors of the Bentley Nuttall trophy. pic by Mike Rushworth 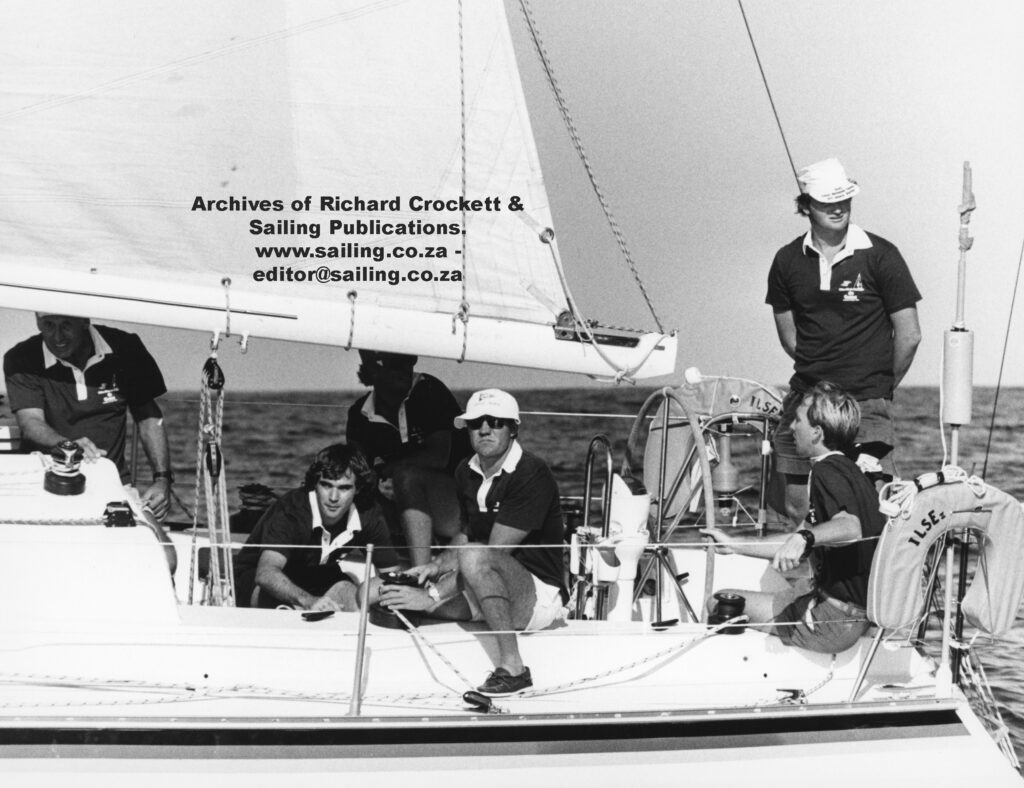 The crew of Ilse, owned by George Ilse. On the helm is Barry Jones with a pensive Anthony Steward standing. Jannie Otto is on the winch.