ZEEKOEVLEI Yacht Club has made a big effort to cut the cost of junior boating by a mass-launching of 20 Rl OD Optimists at their opening cruise. It was a splendid culmination for Commodore Eric Bongers, all his helpers and generous sponsors.
Photo: David Baker

Sadly I still have the impression that there was no serious drive to push the Optimist Class on a national basis as there appeared to be isolated pockets of excellence dotted around the country.

Despite the slow progress, a report in SA Yachting in February 1972 stated that “… the class has developed to such an extent in the Western cape that it has become necessary to form a Western Cape regional committee…”.

The Western Province Junior Champs were held at Zeekoe Vlei in mid-December, with strong south-easter winds blowing.
READ ABOUT IT HERE:  Pages from 1972 02 – SA Yachting – OCR

In May 1972 it was reported that the Association held its annual regatta at Midmar over Easter and for the first time there was representation from more than one Province.
READ ABOUT IT HERE:  Pages from 1972 05 – SA Yachting – OCR

In June 1973, after almost a year with no Optimist news appeared in SA Yachting, a report appeared about the Optimist Nationals, sailed over Easter, at Zeekoe Vlei, where Chris King won convincingly.
READ ABOUT IT HERE:  Pages from 1973 06 – SA Yachting – OCR

The next news reported on the 1973 Optimist Internationals at which Chris King represented this country, finishing 24th in a fleet of 130 boats.
READ ABOUT IT HERE: Pages from 1973 09 – SA Yachting – OCR

The following month an Interhouse regatta was held for the Monterey Boys school, with Dabchicks and Optimists competing. It’s rather an amusing report.
READ ABOUT IT HERE:  Pages from 1973 10 – SA Yachting – OCR

In November 1973 it was reported that plans were being issued at the rate of 10 per month, and that more Clubs were beginning to embrace the Class and the building projects.
READ ABOUT IT HERE:  Pages from 1973 11 – SA Yachting – OCR

Finally in the December issue of ‘73 it was reported that due to the interest, thought needed to be given to sub-committees being formed in the provinces. Plus there was talk of sending a South African team to Worlds. Of interest in this report was discussion of which boat should the kids graduate to after Optimists, with the Laser being a possible option as this question was posed.
READ ABOUT IT HERE:  Pages from 1973 12 – SA Yachting – OCR

Enjoy another selection of great pics – and please remember to SHARE with your mates and feel free to COMMENT too. 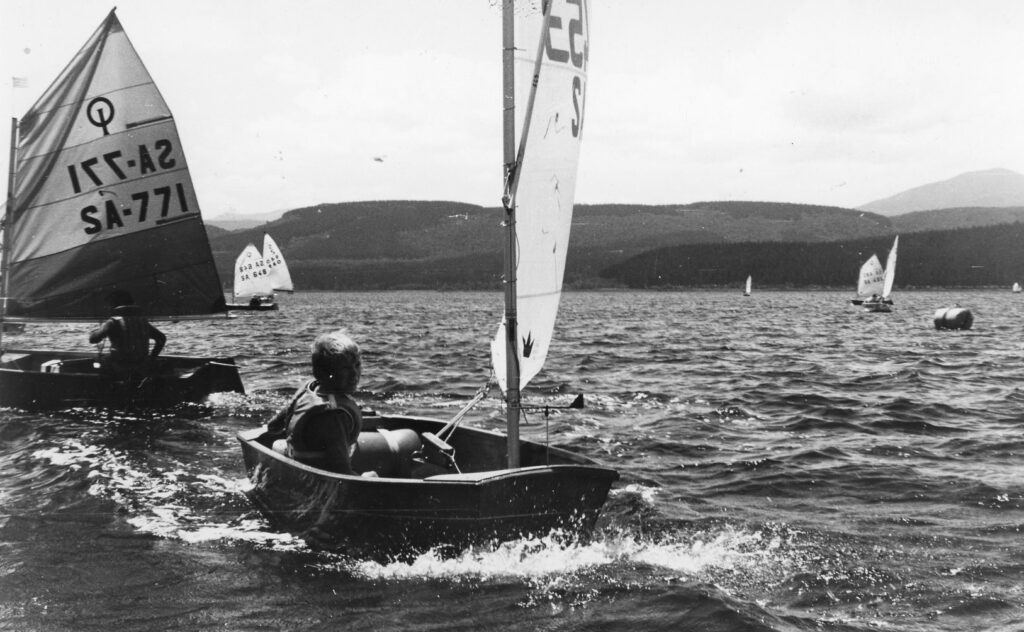 S James in ‘Stancombe Wills’ and Anthony Stephenson in ‘Chatterbox’ at the finish of the last round. 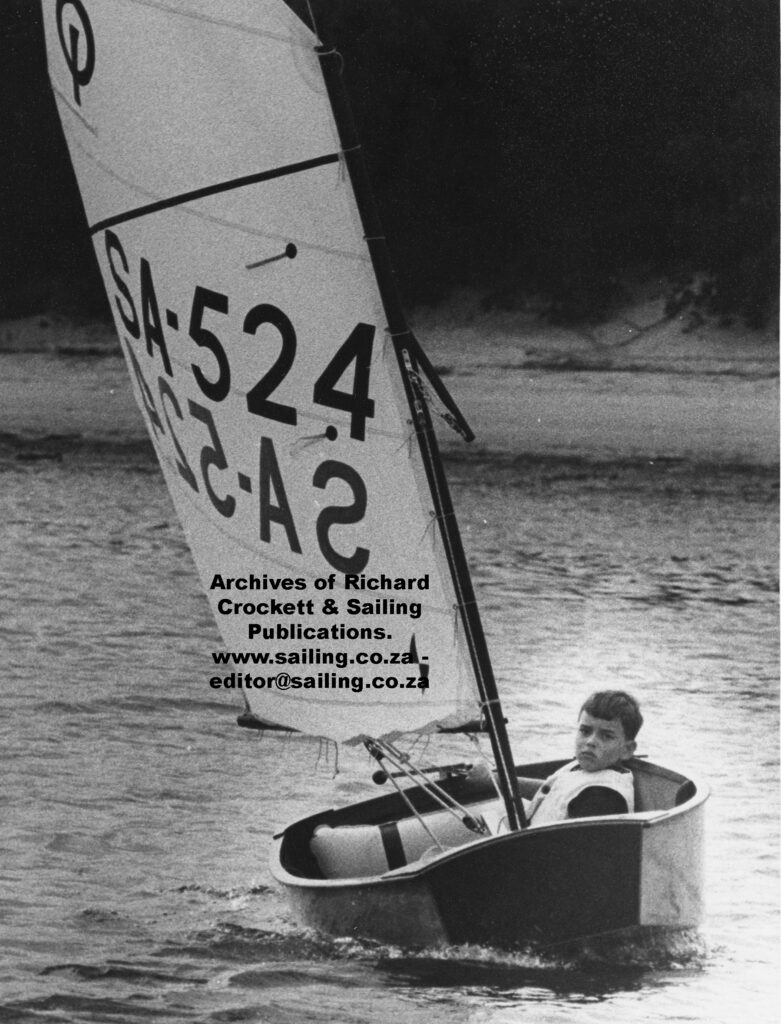 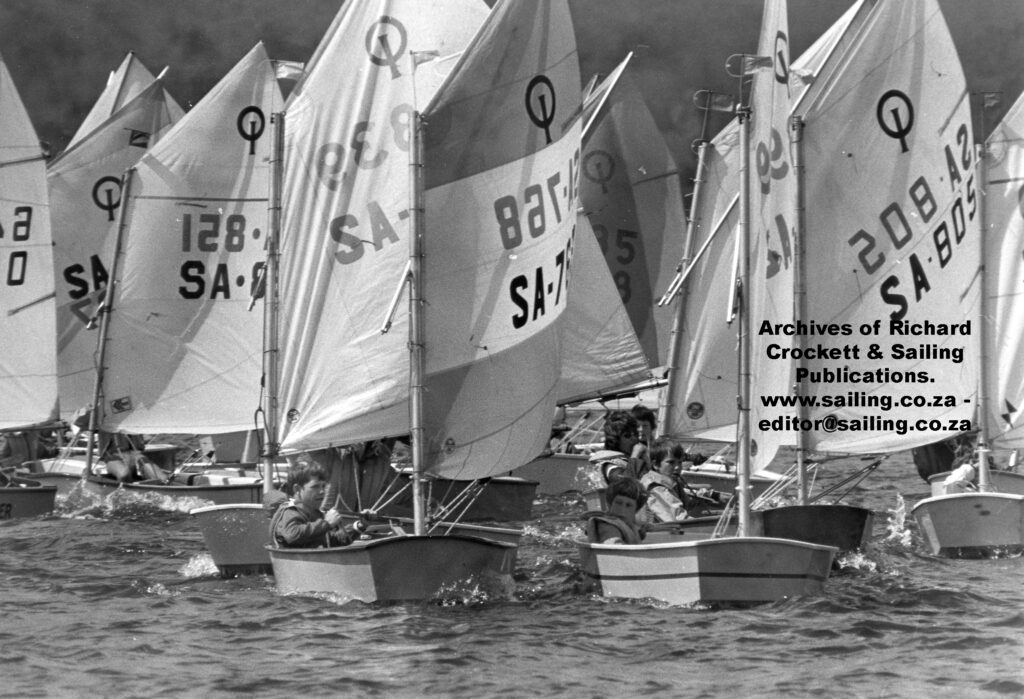 A good start by the fleet of 50 Optimists competing for their Transvaal junior championships. In the foreground is Geoffrey Page, Clara Hooyberg who came 4th and was the first girl home. 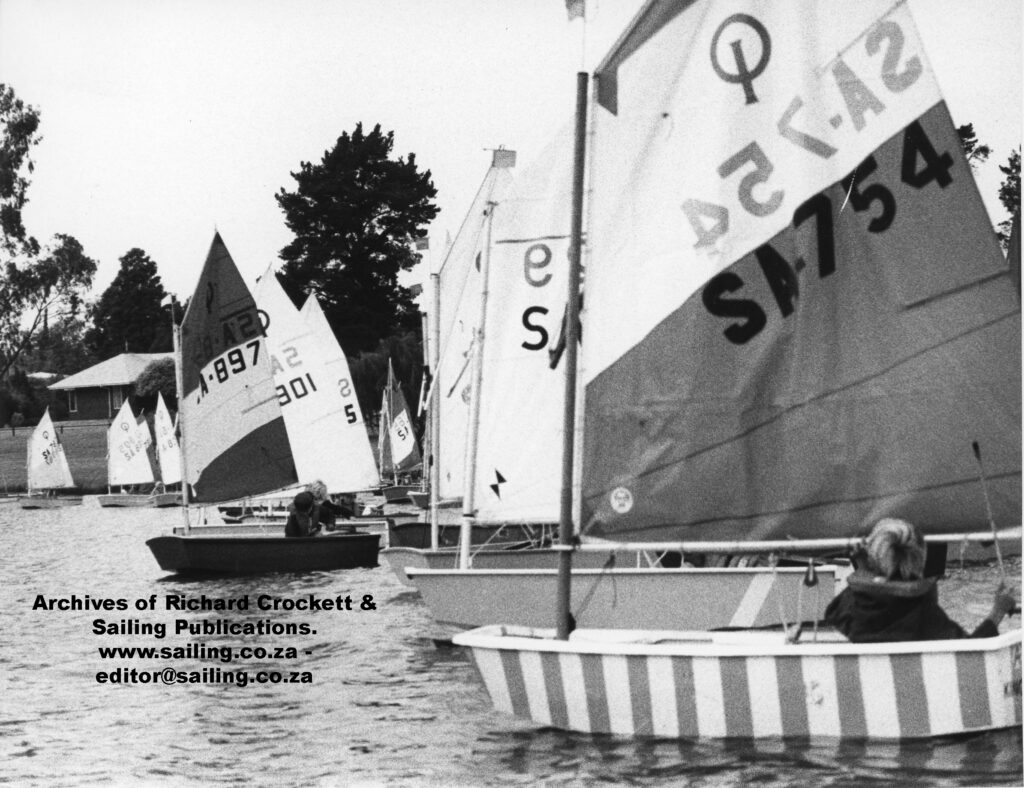 Lining up for the start in the Optimist interclub are Andrew Tyler of Emmarentia and Hilde Aspeling ahead of the fleet and over the line. In the foreground is Byron Green of BSC sailing ‘King Cone’. 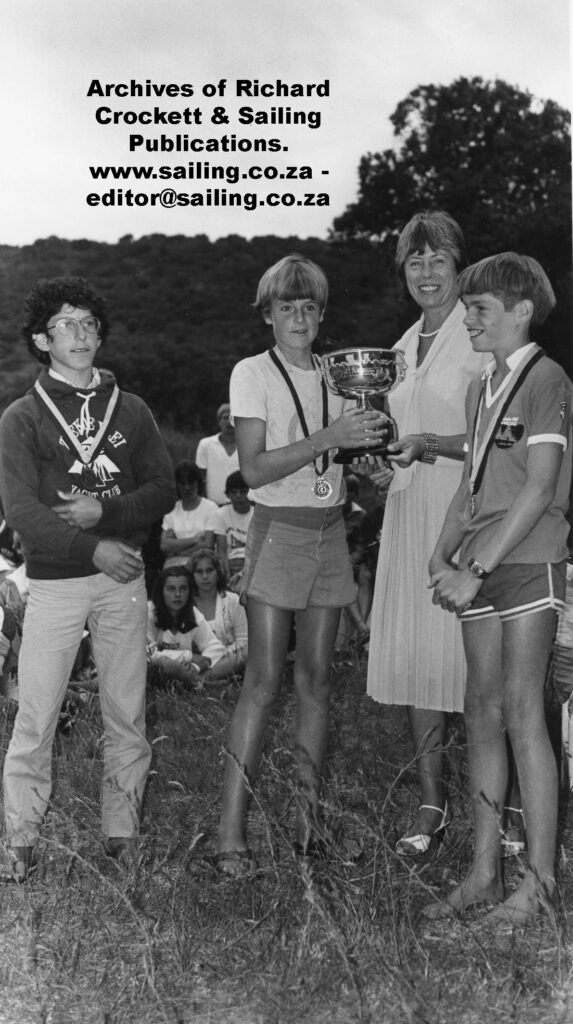 Despite there being no caption to this, the trophy holder can only be Jonathan Swain?
Who are the others in the pic and what year was this? 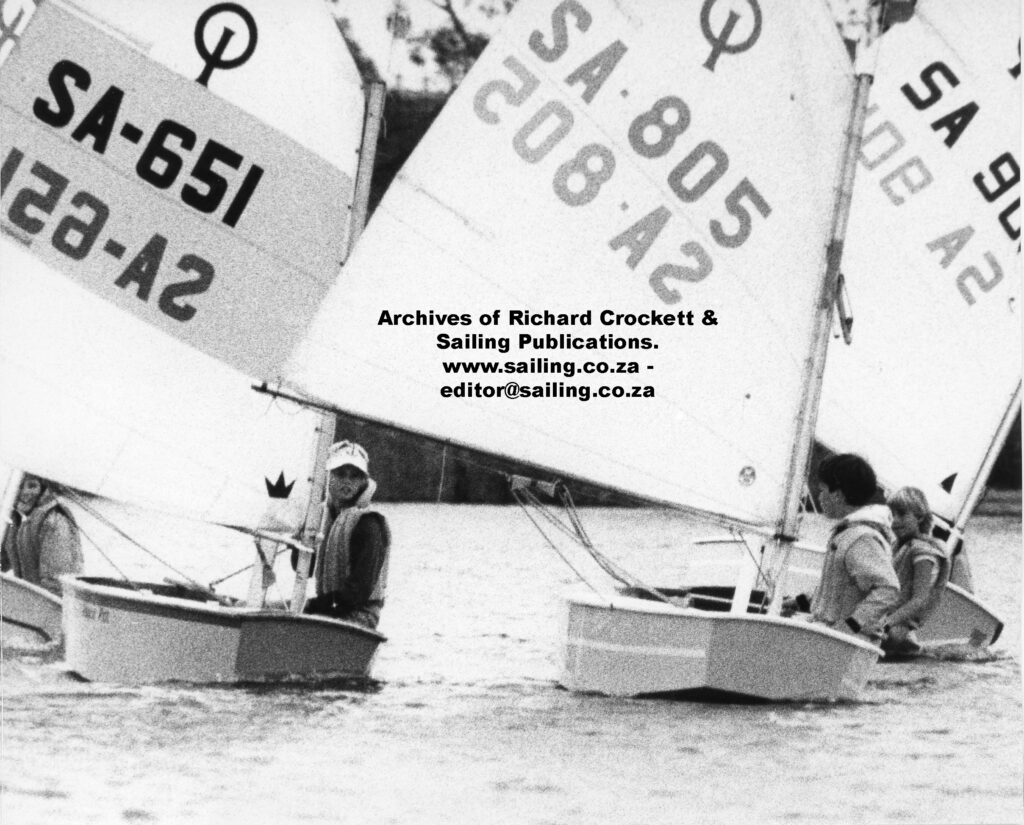 Kim de Venage of Pretoria’s winning team, Bev Sawyer and Charles Young from Emmarentia and Hilde Aspeling of Pretoria during the Optimist interclub. 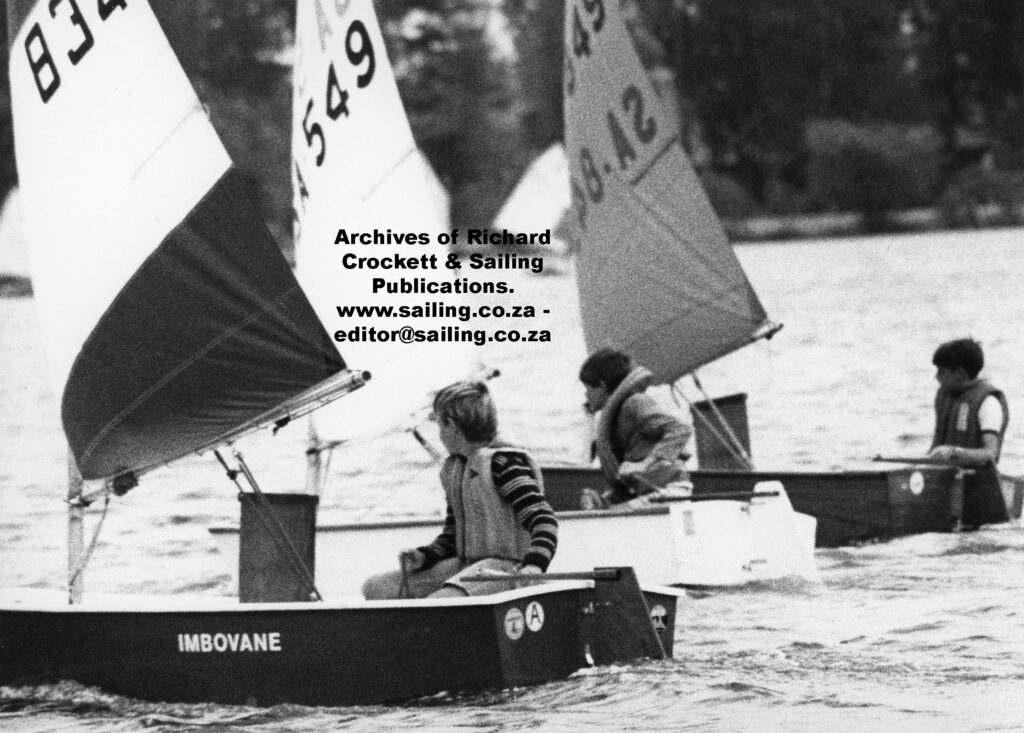 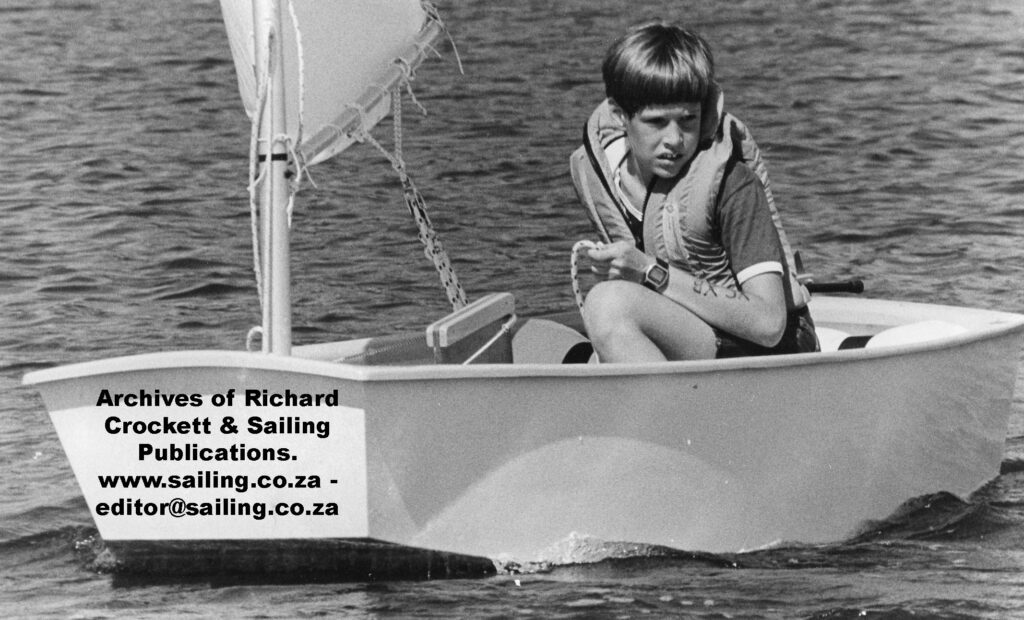 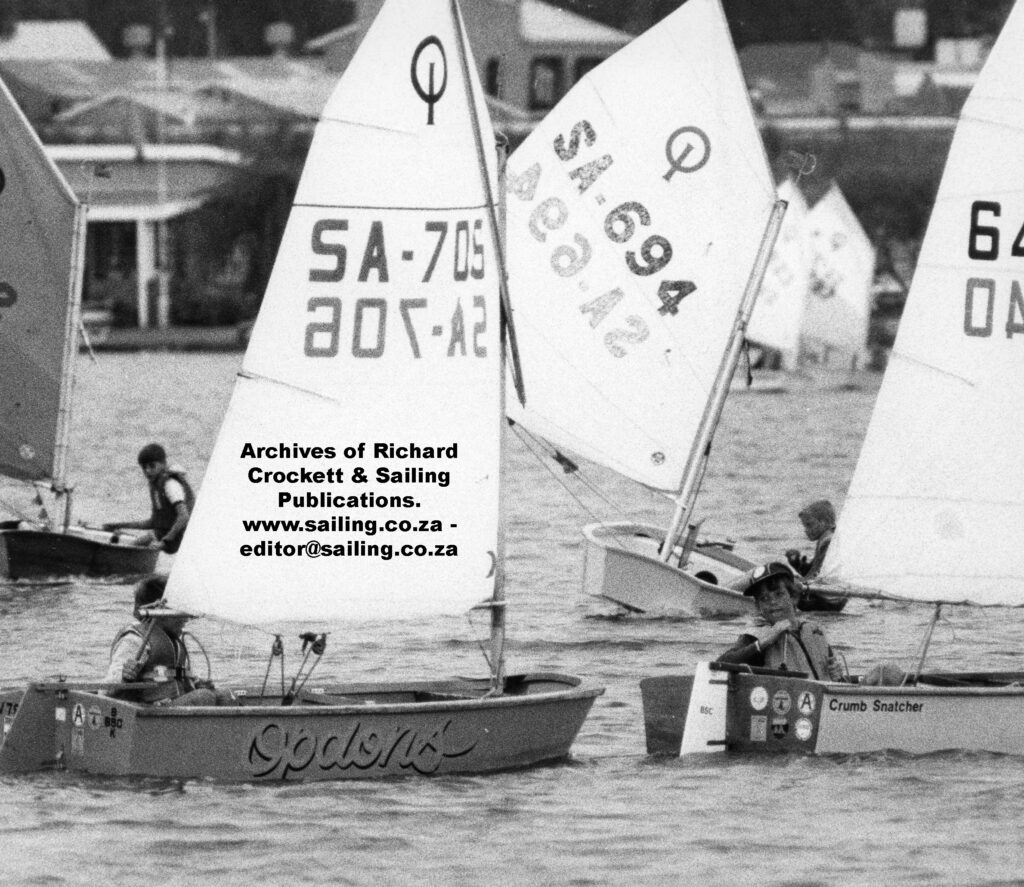 Tommy Kasselman of Benoni was the most successful individual skipper to help his team into second place. With him is team mate Gary Crawford and Stefan Aspeling of Pretoria. 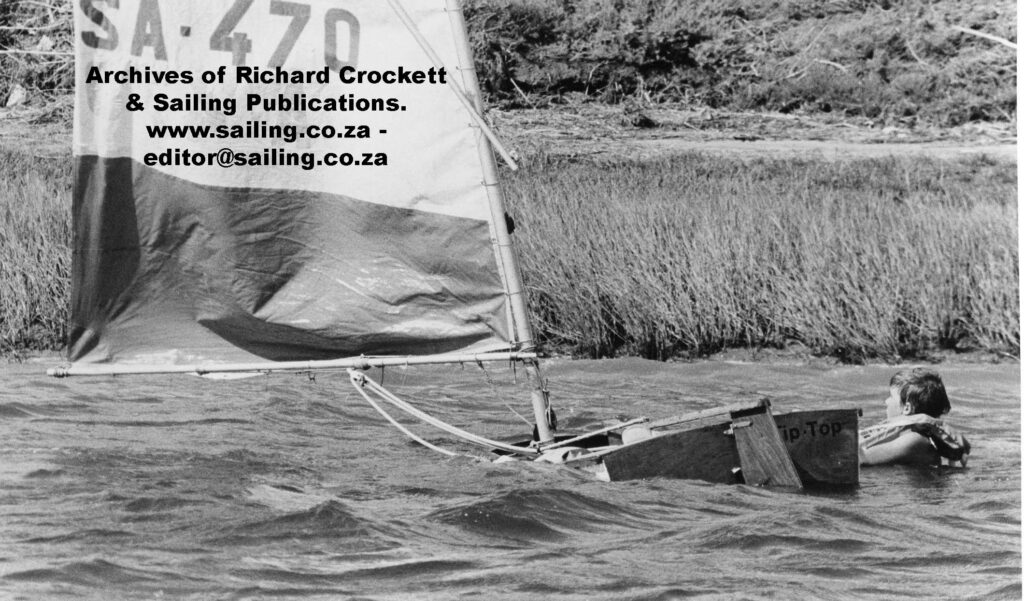 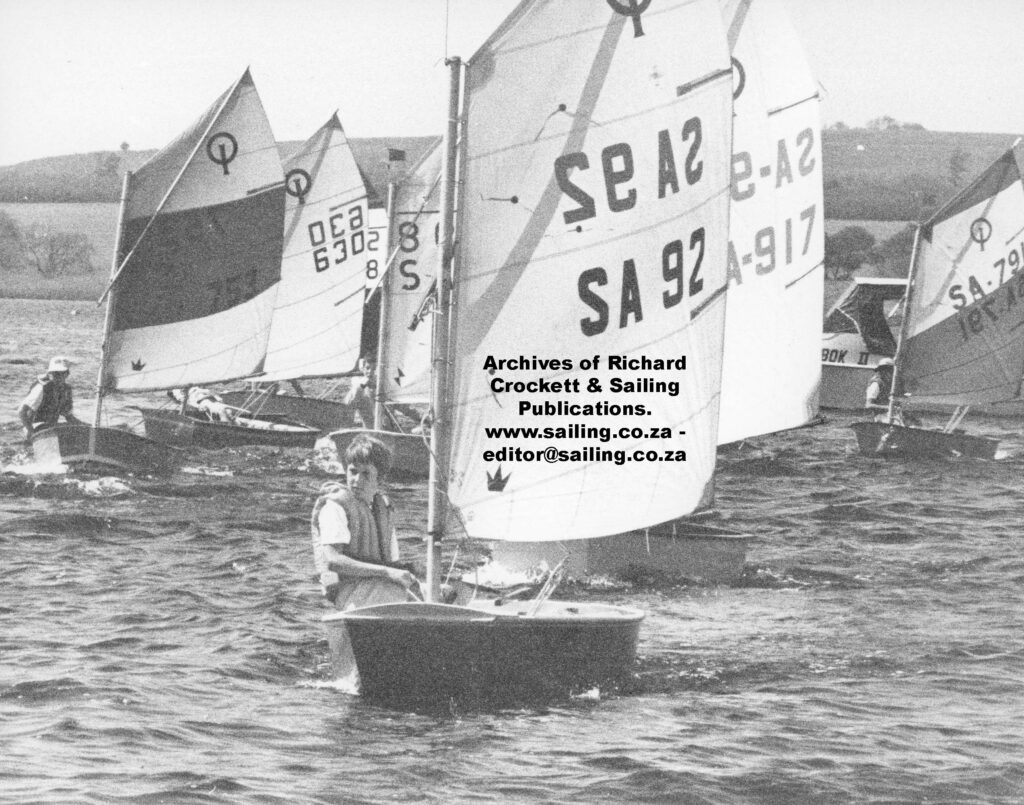 Richard Tough of TYC leading the fleet after the start of the fourth round of the Optimist Highveld championships. 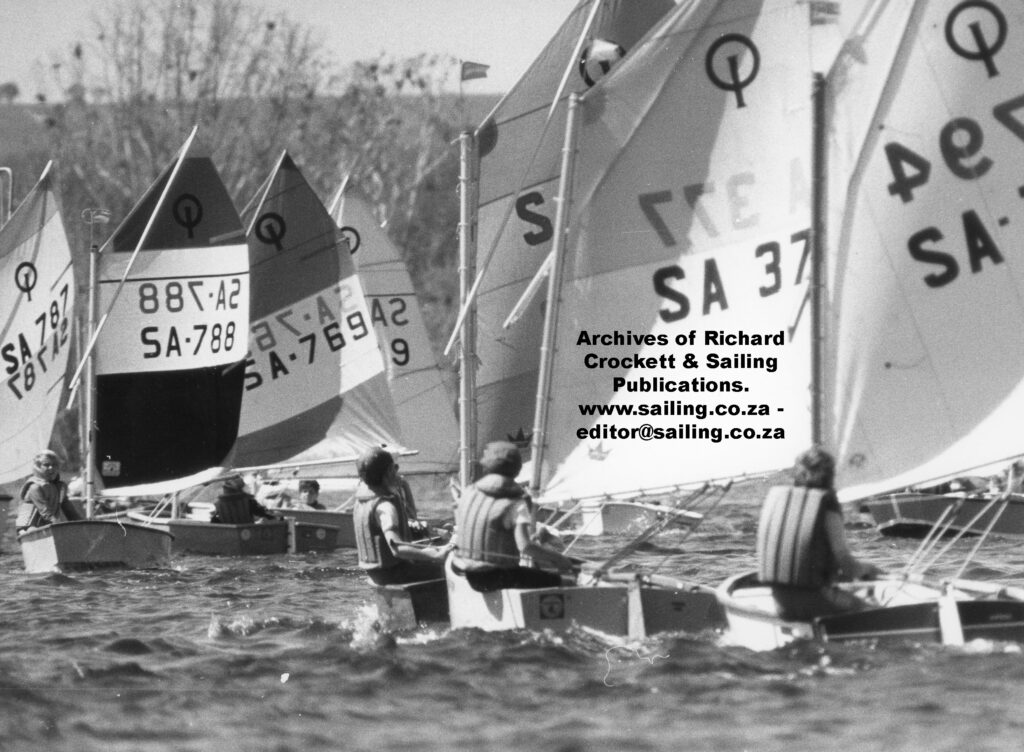 Optimist skippers jockeying on the line before the start during the Optimist Highveld championships hosted by Pretoria Sailing Club. 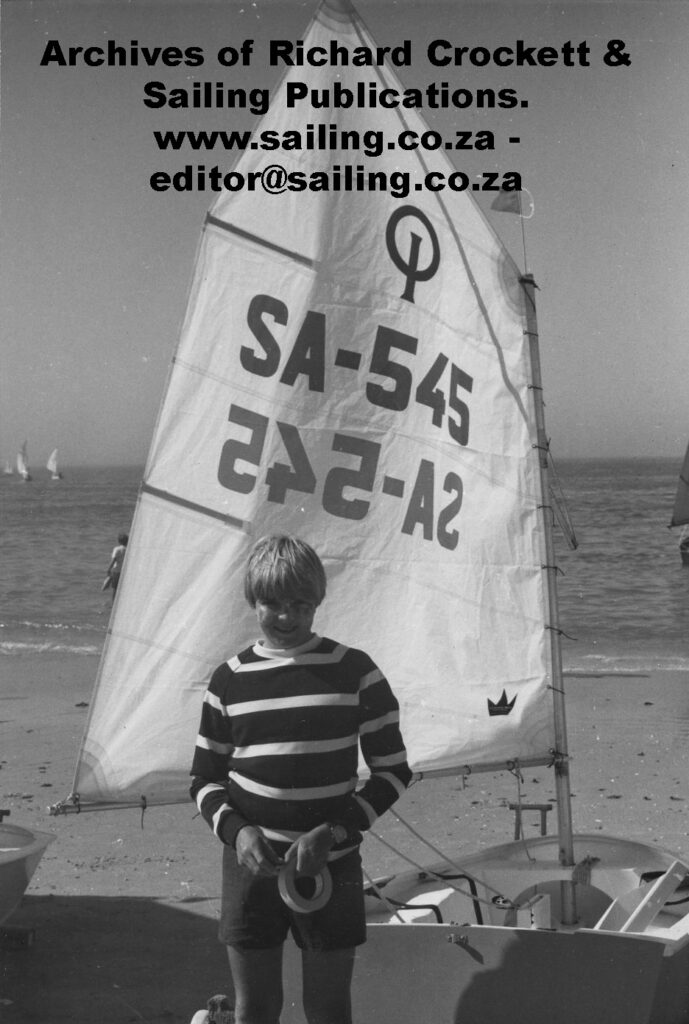 Top in the Optimists. Bruce Gold of Imperial Yacht Club. 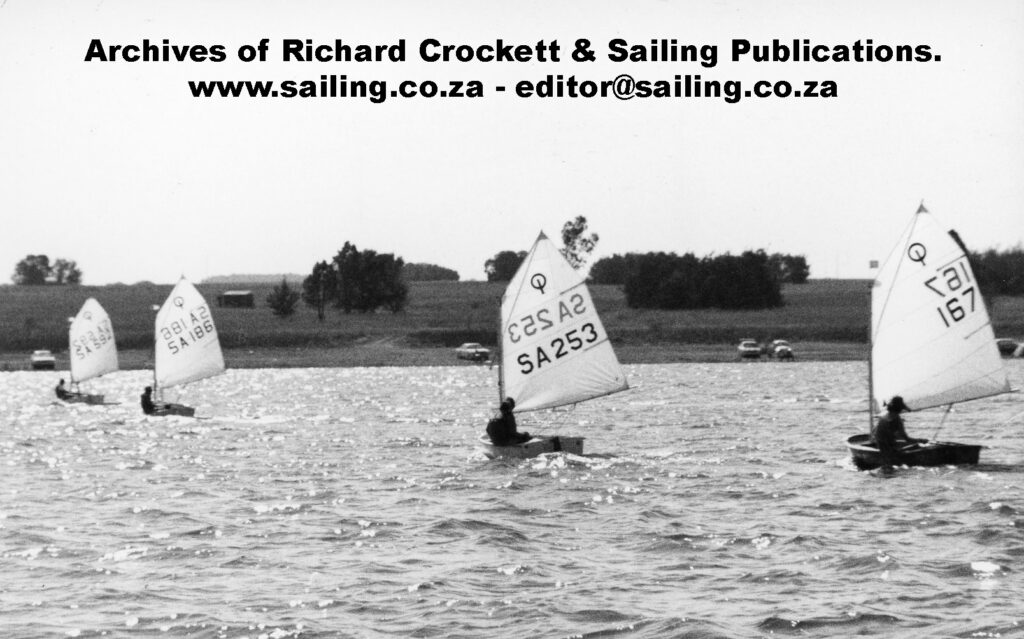