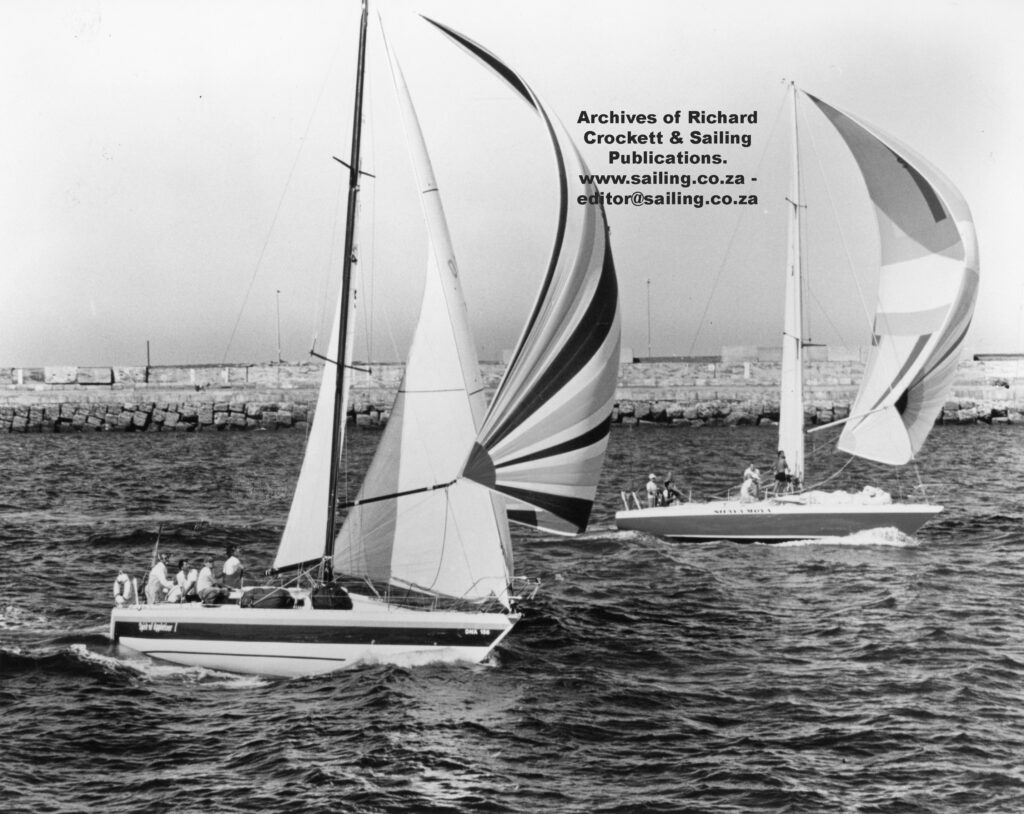 1985 Vasco. The IOR winner on handicap was Spirit of Appletiser (foreground) beaten in a neck-and-neck finish in East London after 240 nautical miles of Ocean Racing. Shaya Moya took line honours – just. This was probably the closest finish for line honours ever.

I am still ploughing through scanning all the B&W Vasco da Gama Race images I have in my archives, and will then tackle the colour slides and prints.

This finish was undoubtedly a highlight and lifetime memory of the Vasco da Gama Race for both Brian Tocknell (‘Shaya Moya’) and Chris Bonnet (Spirit of Appletiser’).

There are many faces today, both known and sadly faces I simply cannot put names to. Alert readers are welcome to assist in providing more info.

The pile has definitely thinned out, yet I have enough for several day to come and will keep scanning until I have done them all. 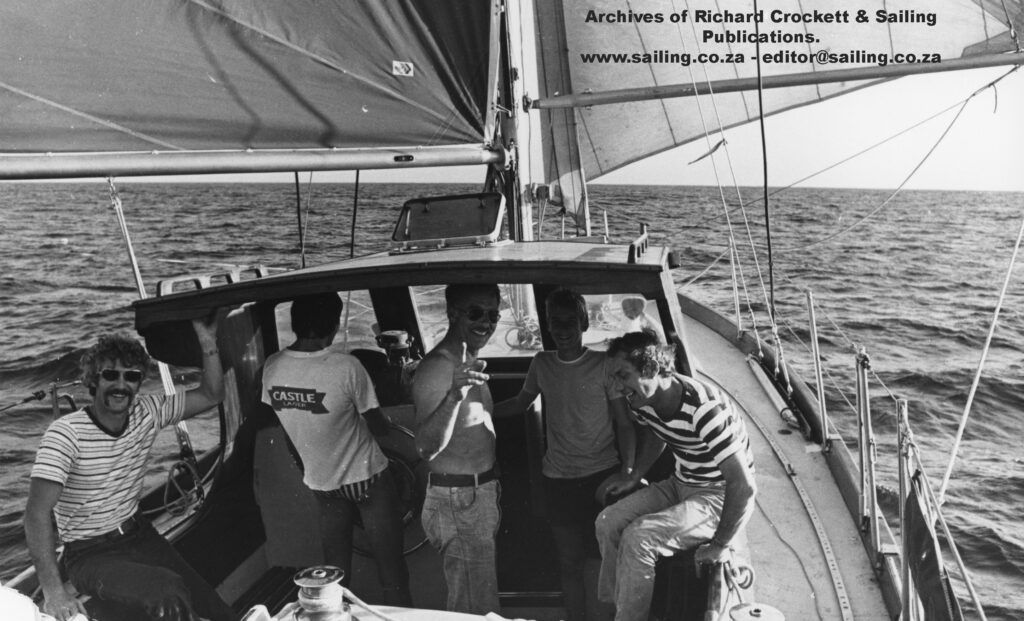 1977 Vasco. The crew of ‘Sea Jade’ in a jovial mood on a dead run deep in the Agulhas current. Note the genoa boomed out on the starboard side.
L-R. Hans van Nelson; JJ Smit; Dick Jones – skipper; Sean Jones; Mike Pienaar – and Mike Rushworth took the pic. Sean Jones is doing the race this year (2022) aboard Regardless. 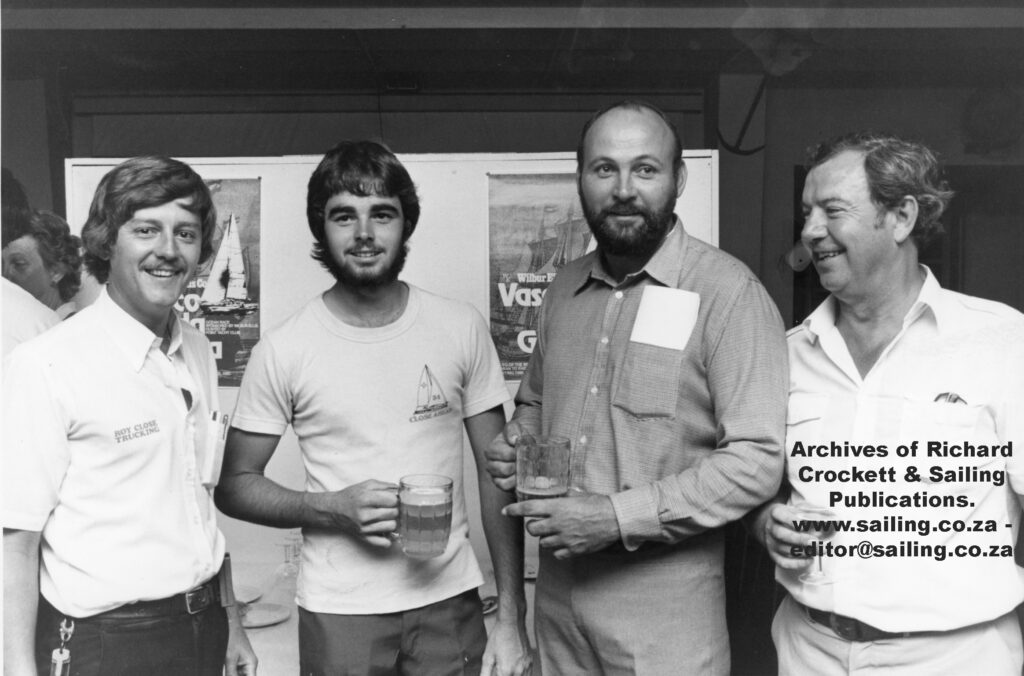 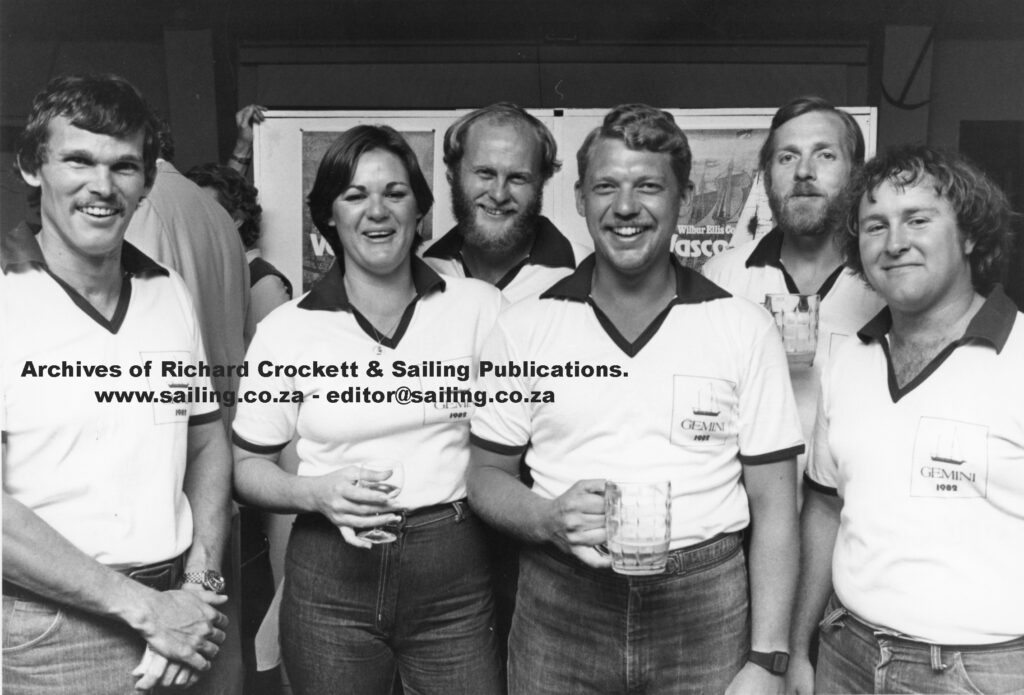 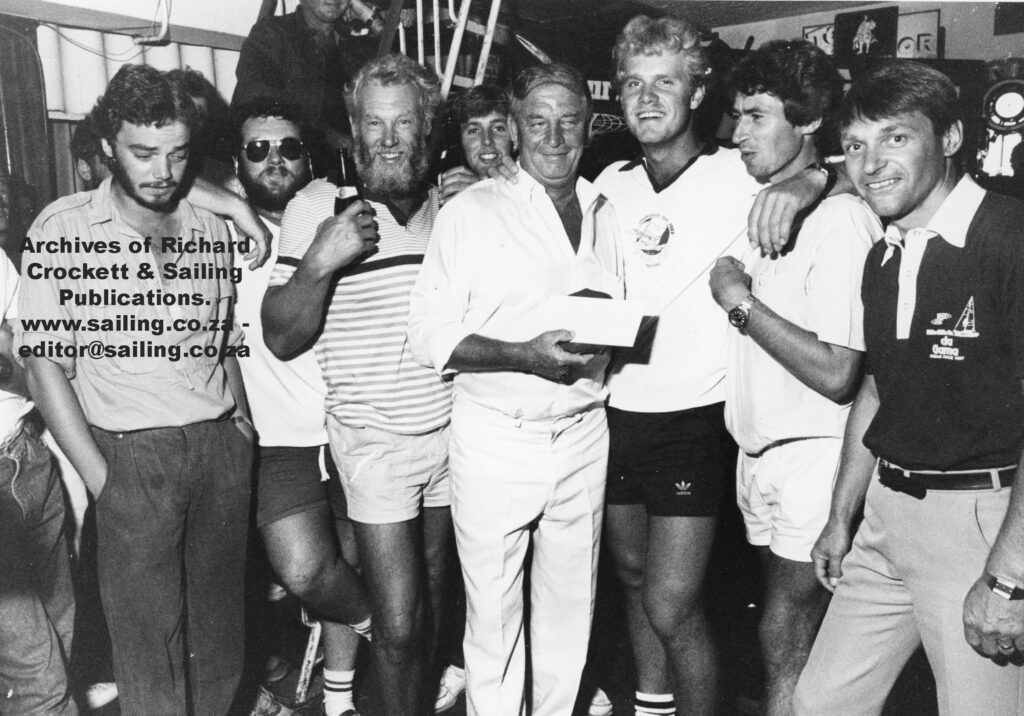 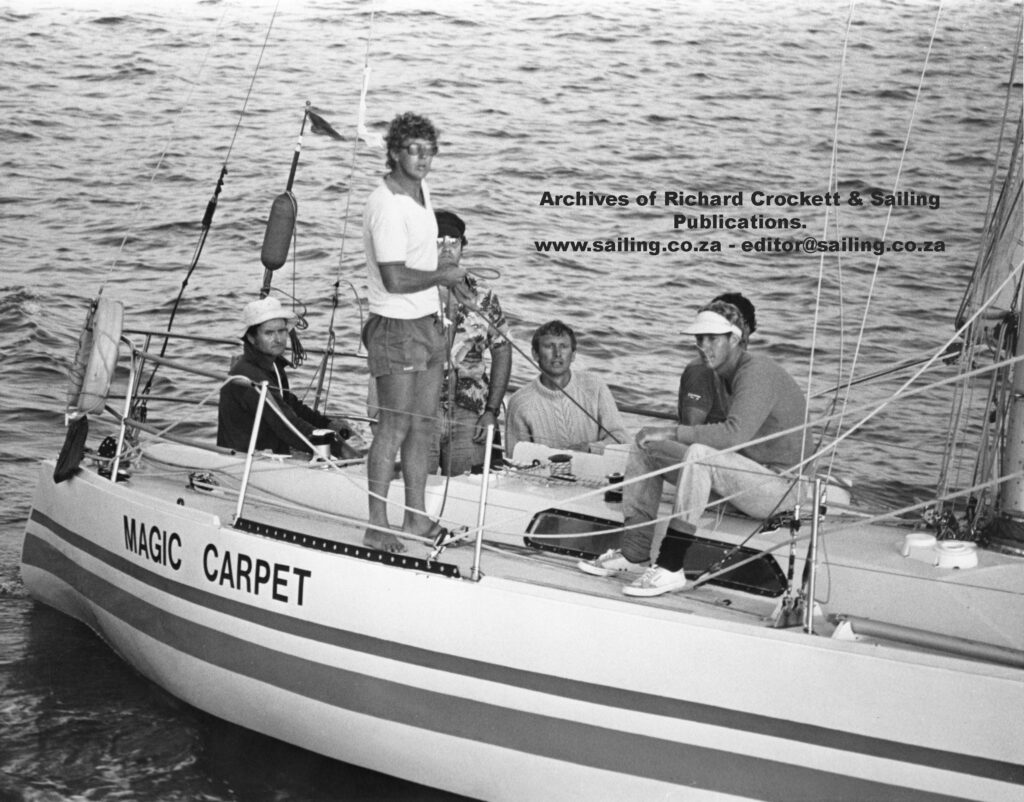 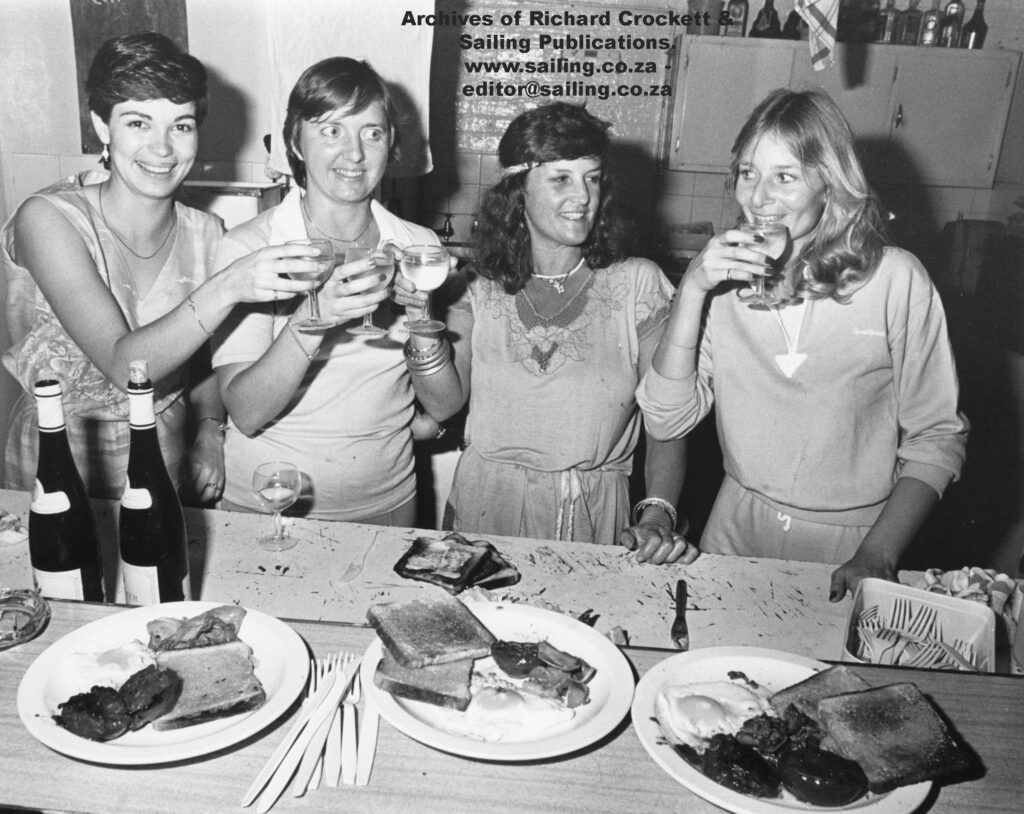 1983 Vasco. Now these were the most important ladies in East London in 1983 as they were the ones who cooked and served the breakfasts as soon as a boat finished and irrespective of the time of day or night. And what a damn good breakfast it was too. Sadly I cannot remember all their names, although second from the right is Penny.
pic by Mike Rushworth 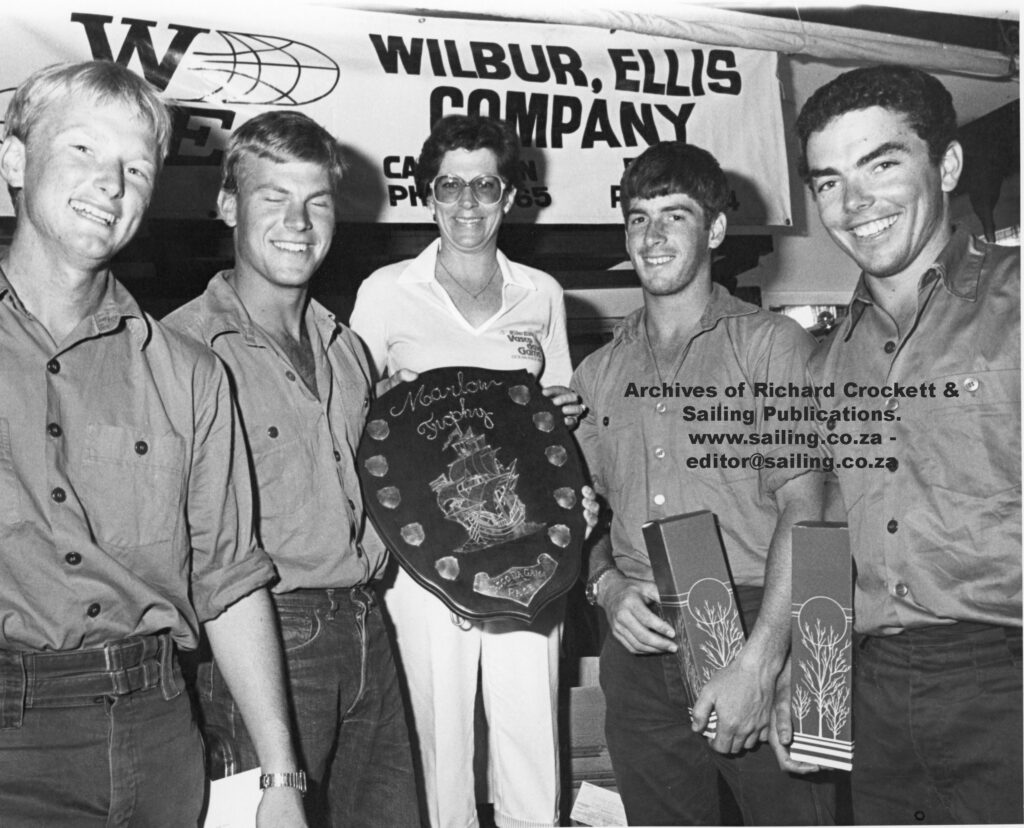 1983 Vasco. The SA Navy crew of Cape of Good Hope (L26) with skipper Marco Constant second from the left.
pic by Mike Rushworth 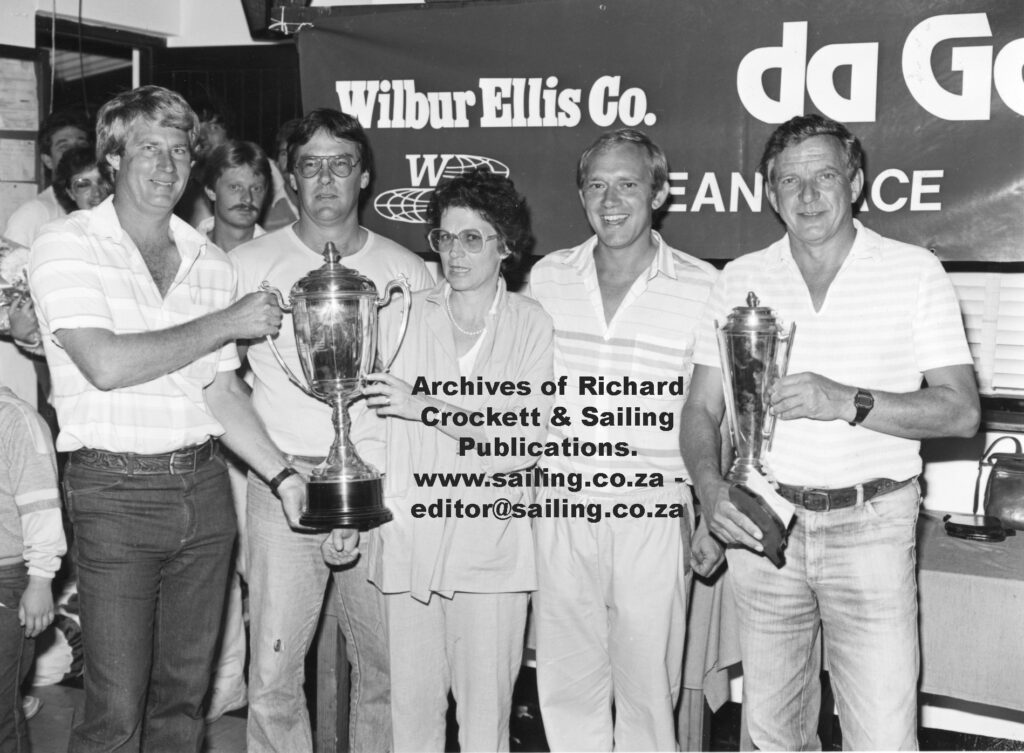 1985 Vasco. East London Yacht Club Commodore Mac Vosloo (right) who sailed Thekwini. They won the Bentley Nuttall RCOD trophy plus the NSRI Trophy. I just wish I could remember the names of the crew? 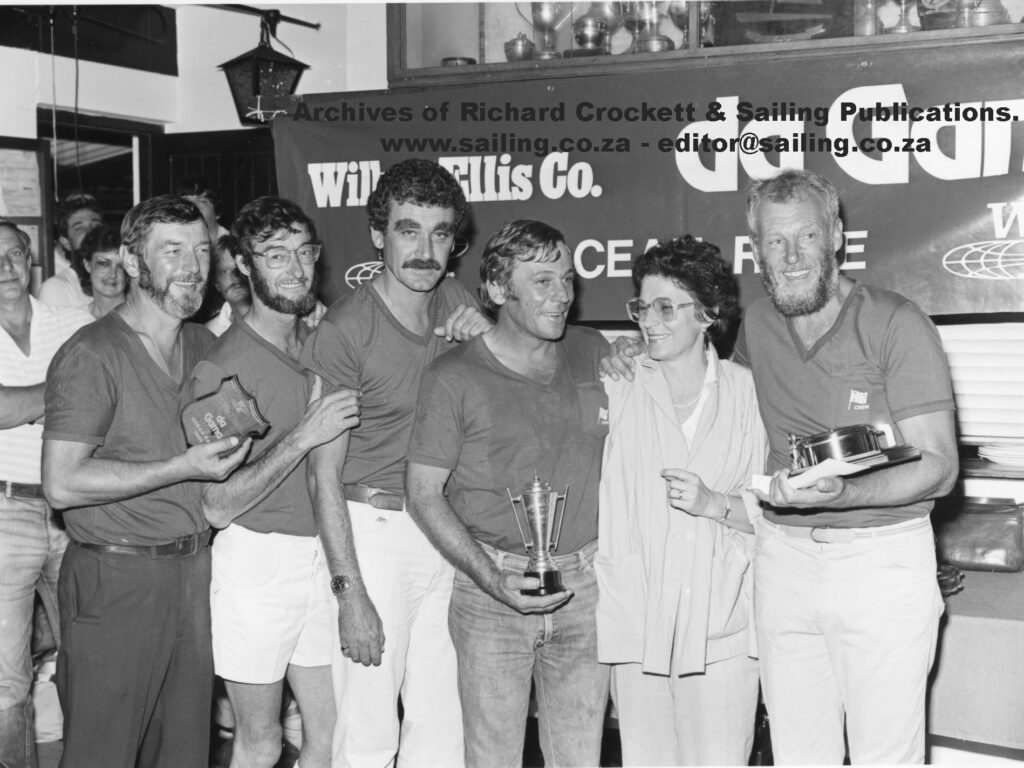 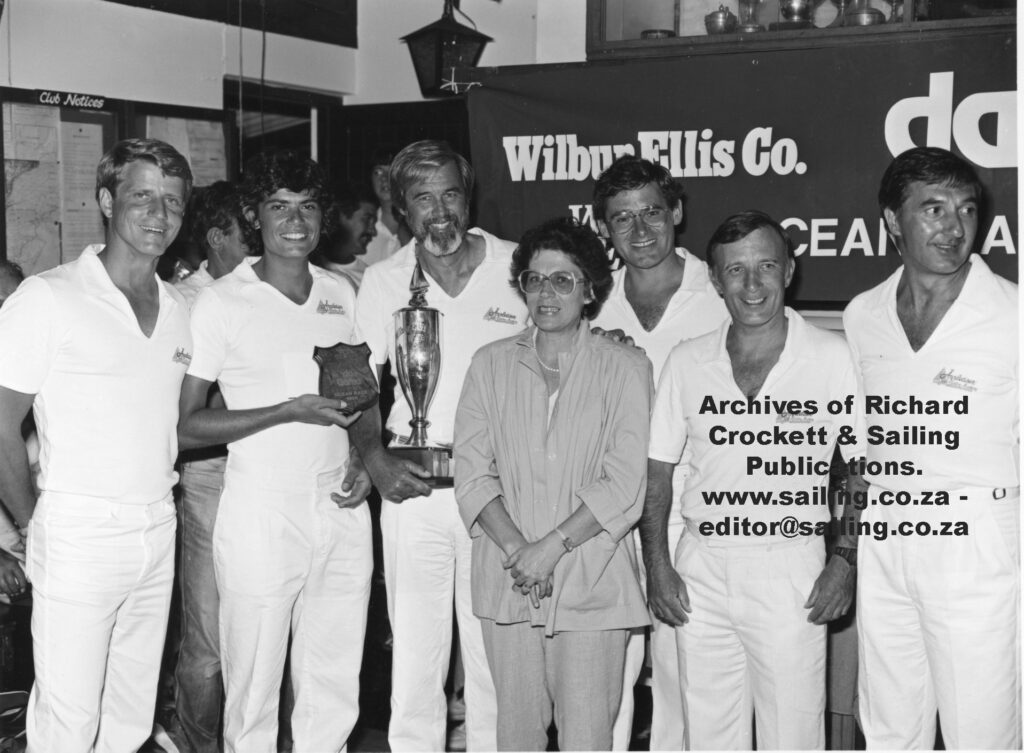 1985 Vasco. Chris Bonnet (with beard) skippered Spirit of Appletiser to a handicap victory, winning the Wilbur Ellis trophy.
To the left of Bonnet is Dave Vinnicombe – the others being unknown! 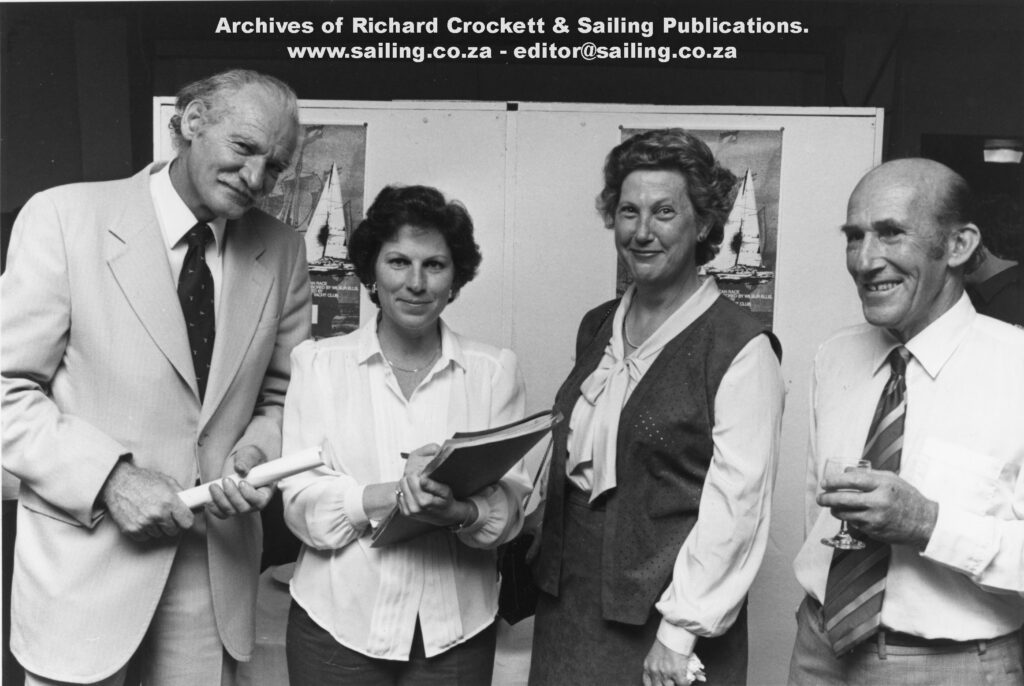 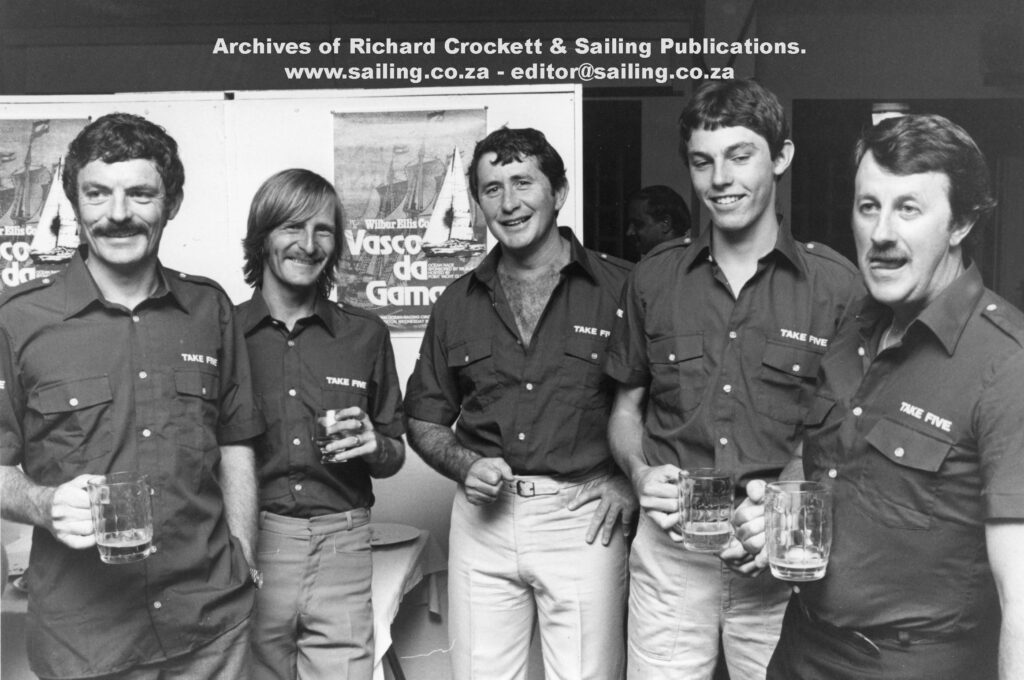 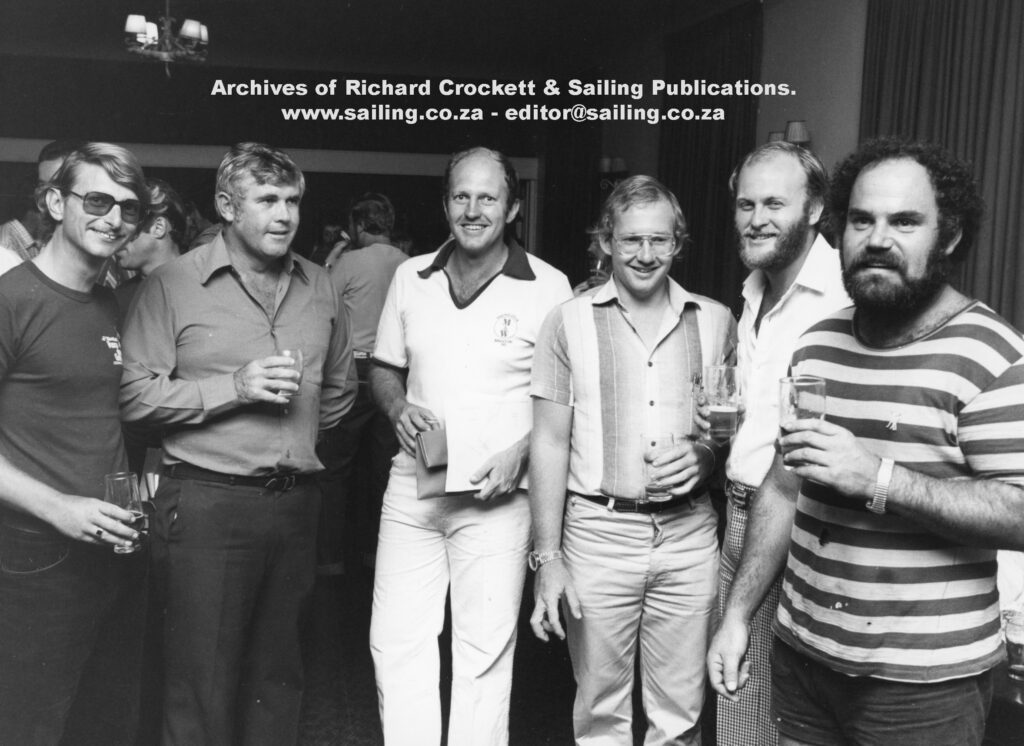 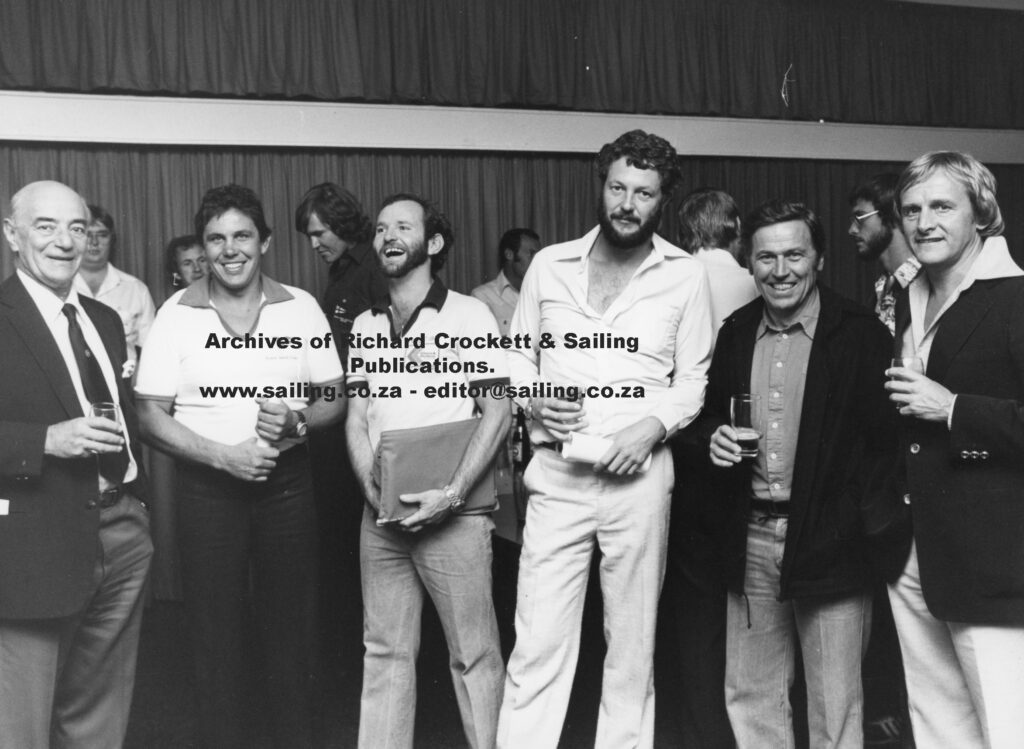 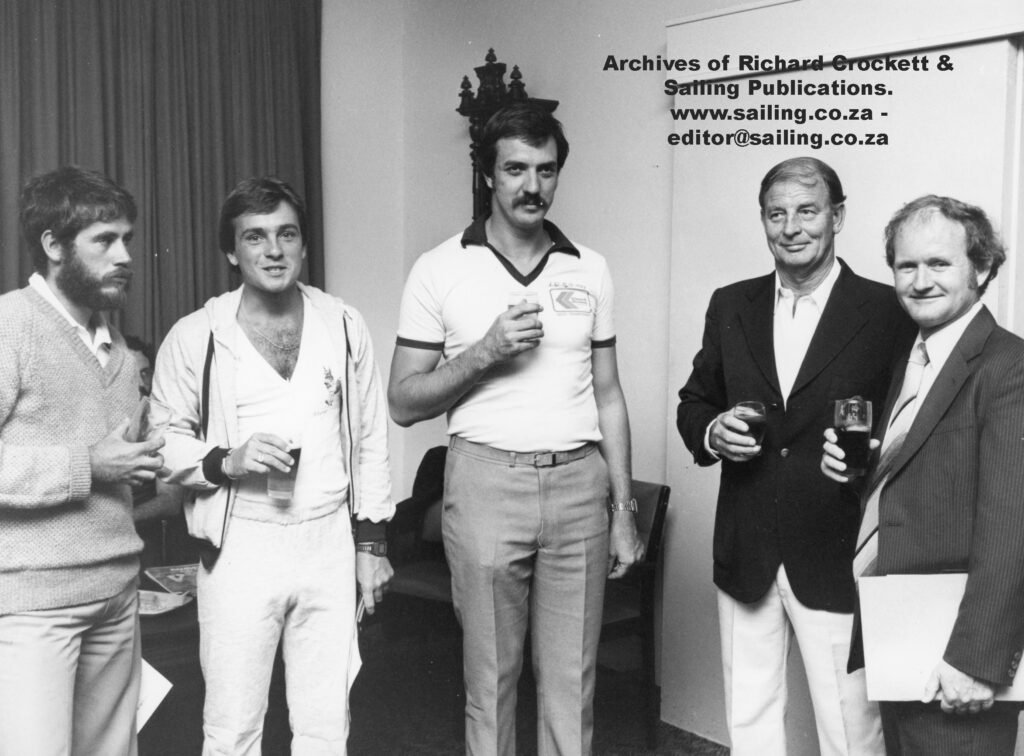 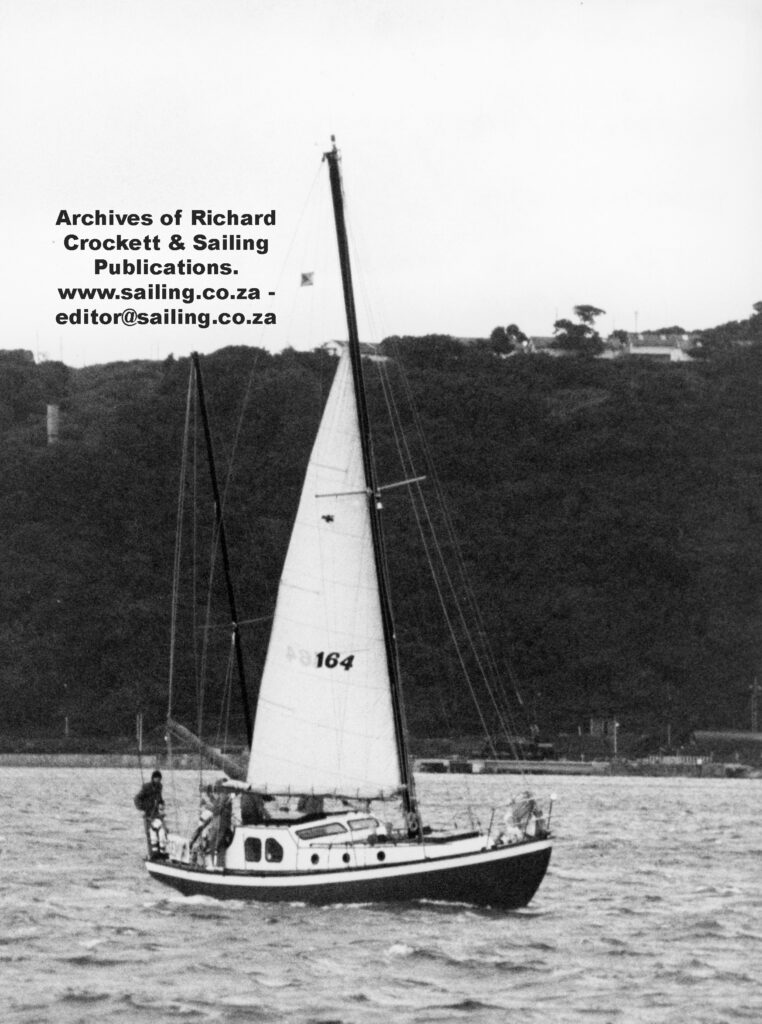 Vasco. Gemini heading for the start. 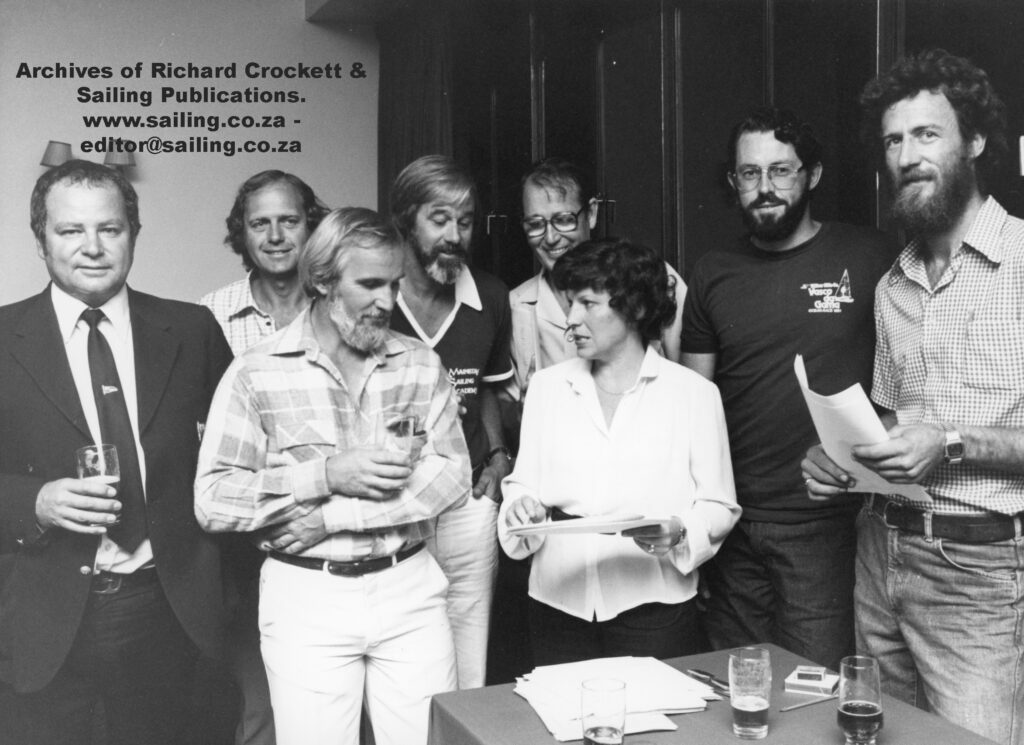 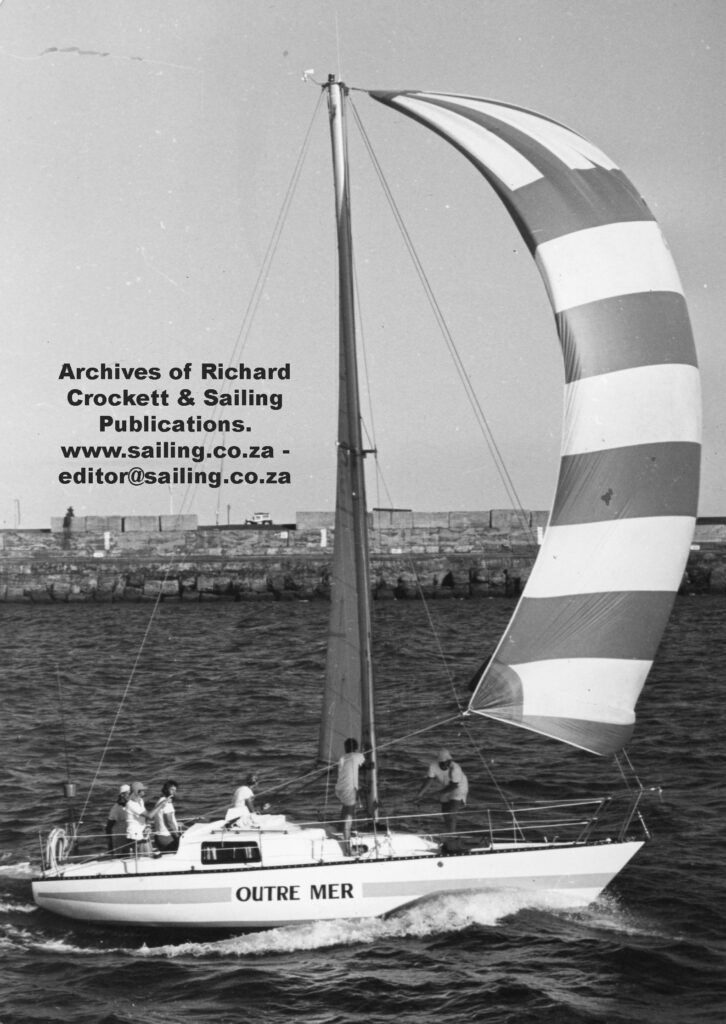 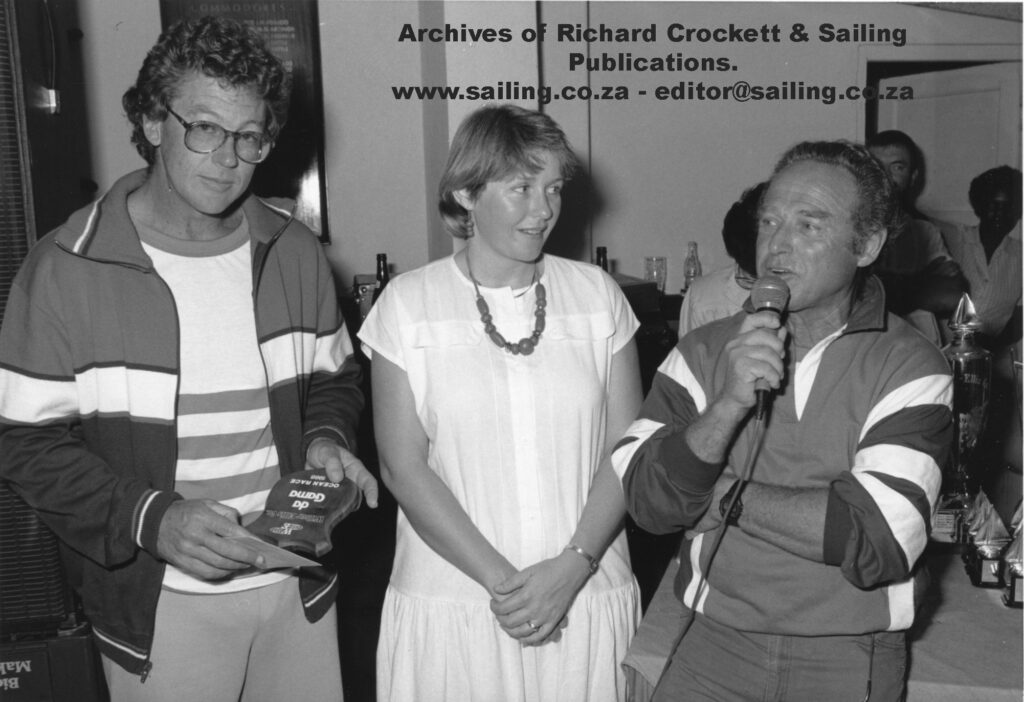 1988 Vasco. Tony Hertzburger, owner of Vuarnet Roulette, thanks the organisers. On his left is Carol King, and to her left is Derick Warne who skippered Vuarnet Roulette.