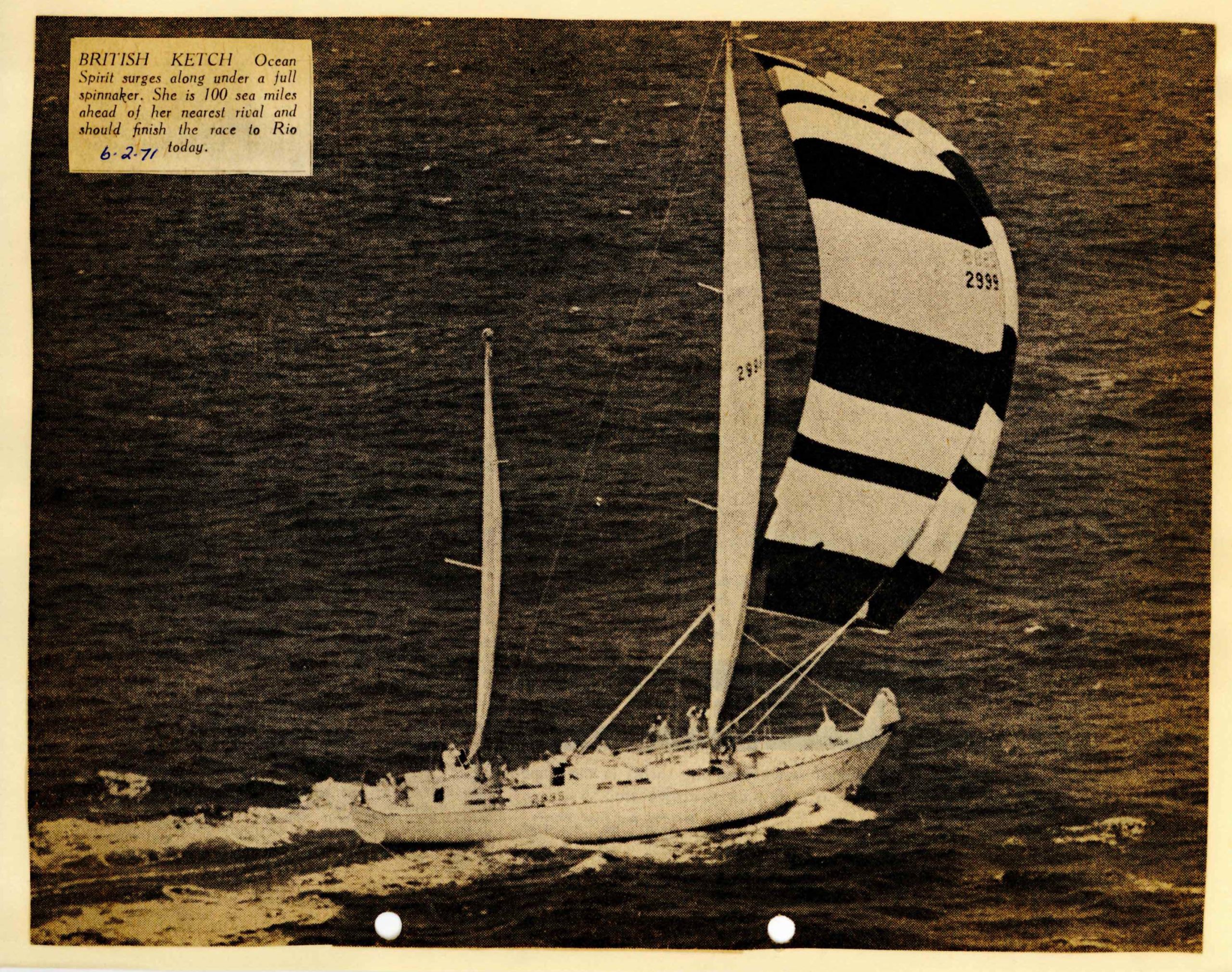 I am sure the older readers will identify with my interest when tried and tested “old fashion” methods of navigation and communication are mentioned as it shows how far we have progressed since the 1971 Rio Race – and also how far we also may have retrogressed as navigation, accurate to within a few metres, is now possible at the push of a button. But that debated is not for now!

I mentioned the above as I enjoyed the report which talked about “a lighthearted exchange of aldis lamp morse between ‘Tafelberg’ and ‘Ocean Spirit’”.

And the quaint way some of the “landlubber” journalists covering the race described some scenes – “. . . both yachts packed with canvas”.

Also interesting is the fact that Robin Knox-Johnston sent a telegram from ‘Ocean Spirit’ to Queen Elizabeth marking the 19th anniversary of her ascension to the throne. Despite looking likely to cross the line first, he still had time for that nicety.

To get back to the racing, read the reports below:

“Tabarly May Yet Pip Rio Leaders”. One thing is for sure at this stage in the Cape-to-Rio race – fancied French helmsman Eric Tabarly is not going to finish in 20 days as he had hoped. But there is every chance that he is going to pip ‘Ocean Spirit’ and other leaders to the post by skilful manoeuvring of his ingeniously designed schooner ‘Pen Duick III’, in which he has won a number of ocean-racing cIassics, including the Sydney to Hobart event.
READ MORE HERE:  1971 02 06 – Rio 1971 – Dave Elcock Collection -000517 – OCR

“Sea Racers Meet – 3000 Miles Out”. For two international ocean racers to be within sight of one another after 3 000 miles of pressure sailing is astonishing. Yet that is what ‘S.A.S. Tafelberg’ found at dusk yesterday – a mere six miles of South Atlantic separating the Canadian ketch ‘Graybeard’ and the sleek clipper-schooner ‘Pen Duick Ill’.
READ MORE HERE:  1971 02 06 – Rio 1971 – Dave Elcock Collection -000516 – OCR

“’Sailing Stirling’ Set for Record”. If Kees Bruynzeel’s ‘Stormy’ crosses the Rio finish line in the position she has had almost to the end she will hand Cape Western yachting an unexpected record. (Apologies for truncated scan).
READ MORE HERE:  1971 02 06 – Rio 1971 – Dave Elcock Collection -000543 – OCR

“Instructions Aim for Safety”. Although the “sailing instructions” have featured regularly in race reports, they are likely to be quoted even more as the finish approaches, and an explanation of their place in the procedure will improve understanding of decisions made “according to the sailing instructions”.
READ MORE HERE:  1971 02 06 – Rio 1971 – Dave Elcock Collection -000540 – OCR 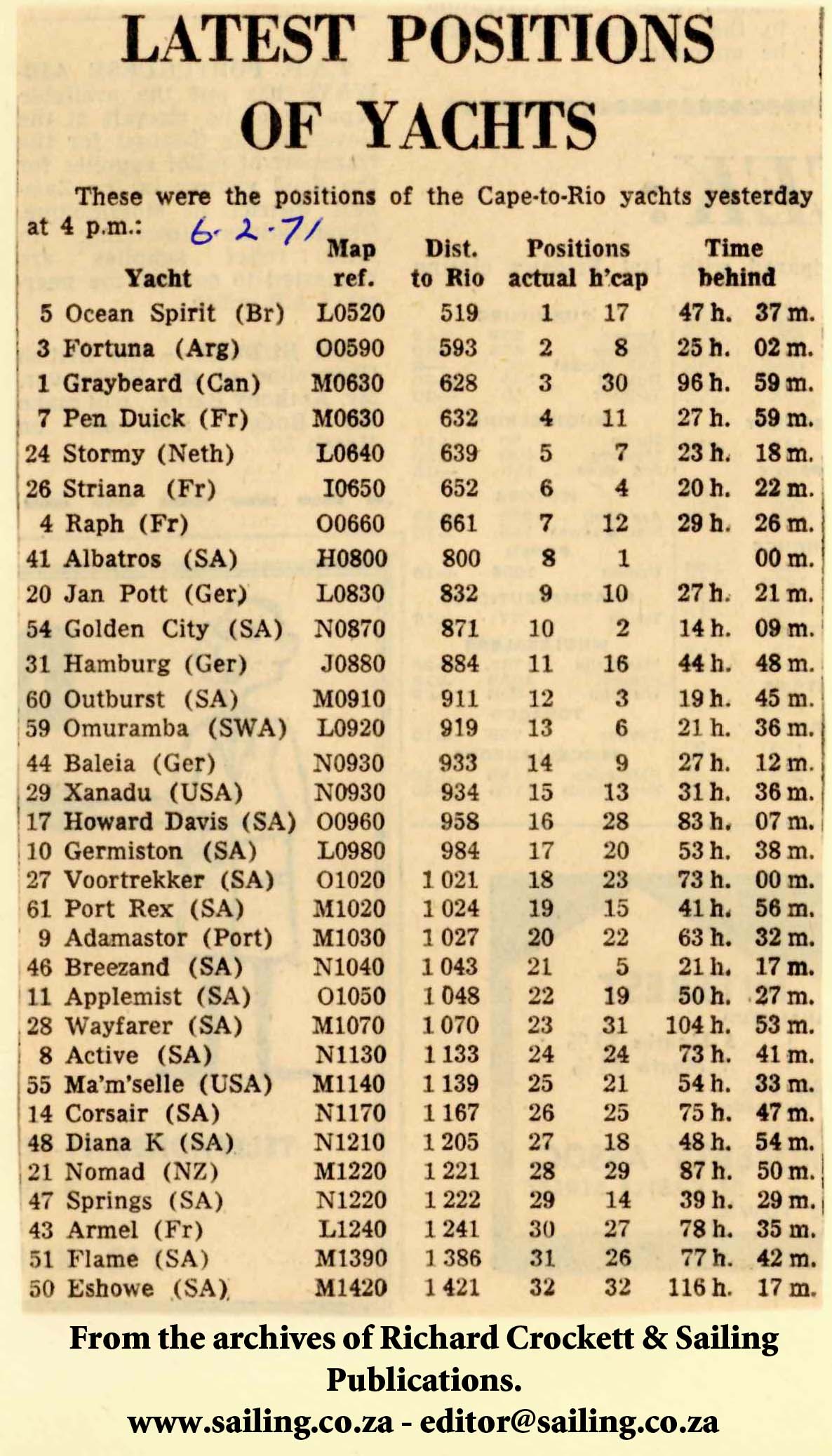