Wow, what a phenomenal response to info on the photos I published on Friday (25 March 2022). There are several old salts out there with wonderful knowledge of our history. Best of all they are happy to share it and help preserve our wonderful maritime history. Thank you one ‘n all.

I am now able to identify the boats and people and archive them accordingly. 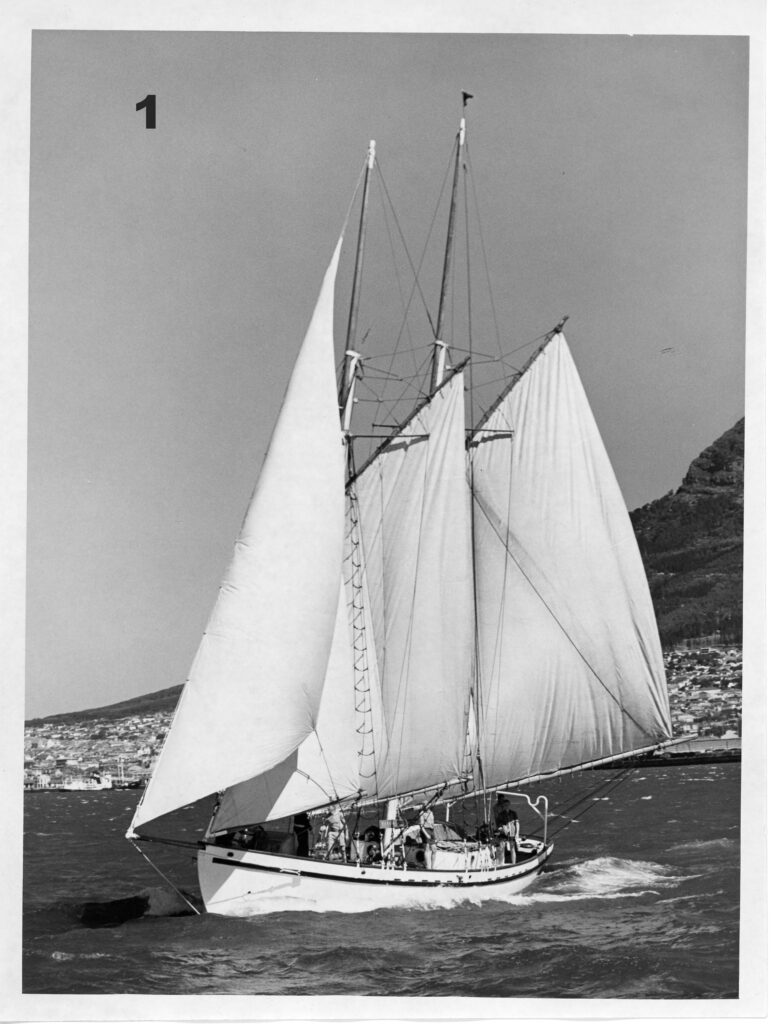 Pic 1. This is Arthur Holgate’s first 60 ft steel Schooner named ‘Titch’ that he designed, built and sailed himself in 1962/63. He sailed it the West Indies where he sold it. He subsequently built ‘Lorraine’ a 73-footer and ‘Antares’ a 94-footer, both in steel.
Holgate was known as Titch by the crew when he sailed as a boy on the square rigger ‘Lawhill’ in the 1940s.
(Note. Some did identify this as ‘Lorraine’, but research through the mags shows it to be ‘Titch’). 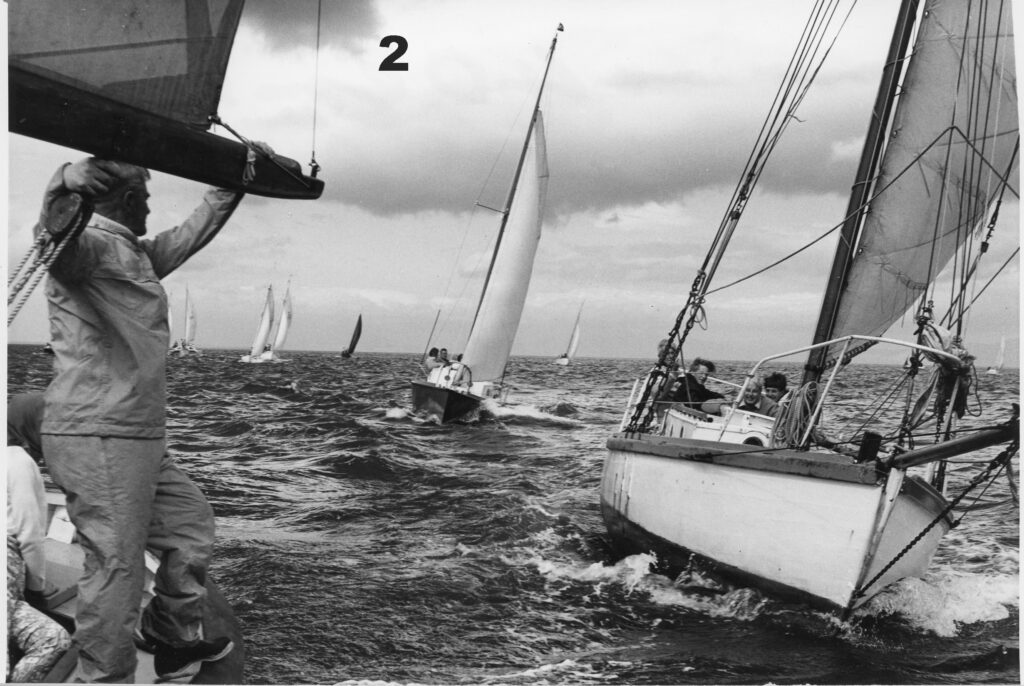 Pic 2. This scene was from the 1969 False Bay Yacht Club Opening Cruise and was published in SA Yachting, December 1969 page 47. The caption in the mag read: There was a rollicking fresh breeze to speed the bonny boats who turned out in Simons Bay to launch the summer season of F.B.Y.C.
The leading boat is ‘Spindrift’, a Table Bay 25, which according to Ian Knipe was owned by John Martin senior. Following her is ‘Jumbo’, which was owned by Cecil Knipe. According to Ian Knipe ‘Jumbo’ is a van der Stadt design which he is currently restoring. 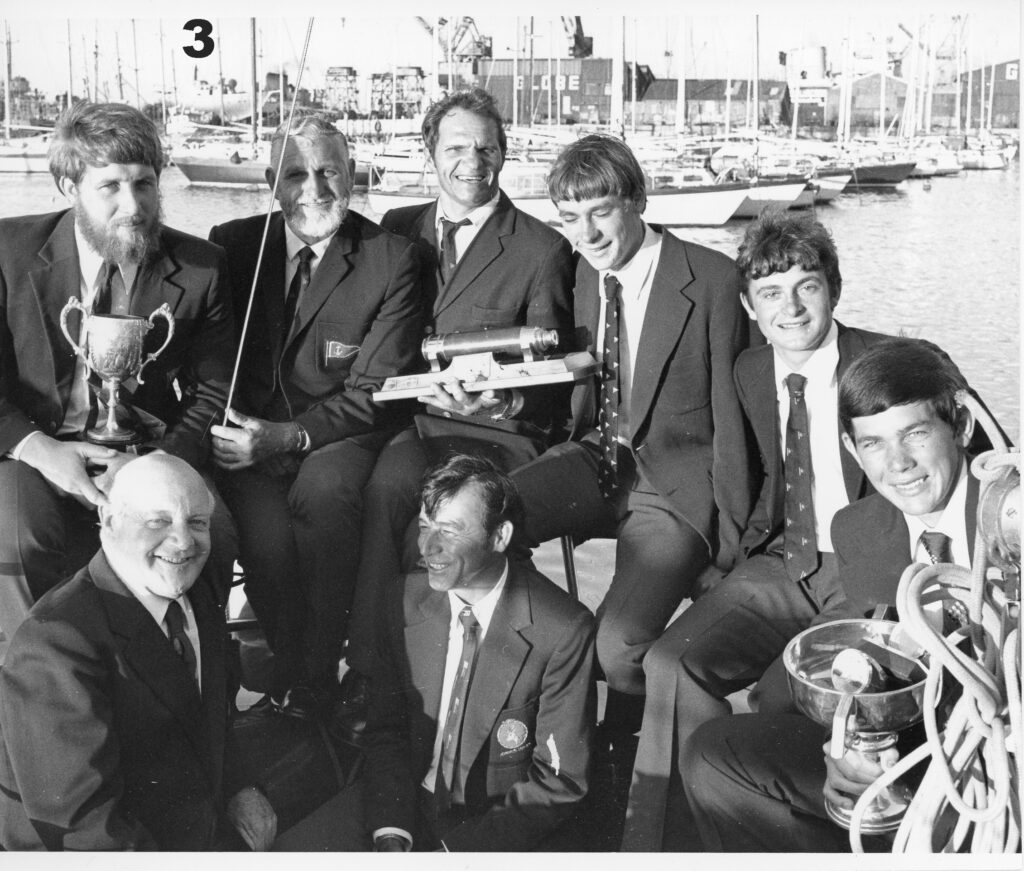 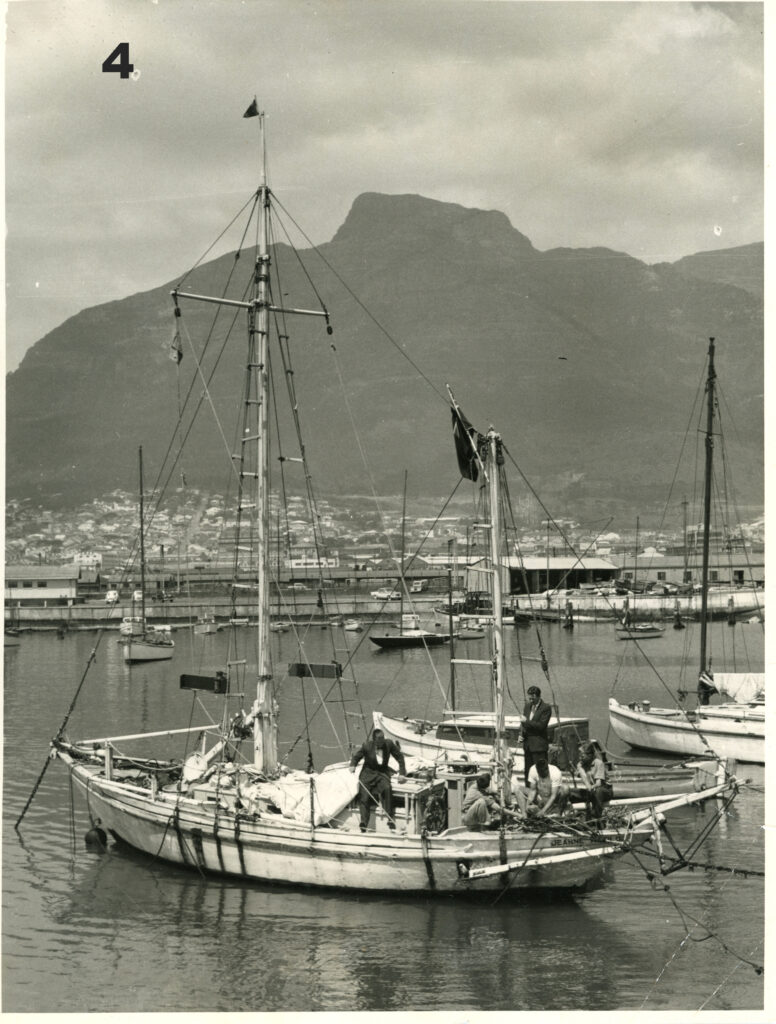 Pic 4. Brian Hallock was able to identify this vessel as the 40′ ketch ‘Jeanne Matilde’ which was owned by Rex King who arrived from Singapore, after a wild trip from Mossel Bay .She stayed over at RCYC to refit before sailing on to Britain.
Her story was published in the 1957 October/November issue of SA Yachting on page 17, and reads as follows:
The 40-ft ketch ‘Jeanne Matilde’ arrived in Table Bay on October 14 after a rather wild six-day voyage from Mossel Bay.
At one time he had to turn back on her course to run with a north-west gale, her owner-skipper. Mr. Rex King, said in a talk with Cedric Wright.
The two members of his crew – Mr. Brian Ramsden and Mr. A. Rippon of Cape Town – said the wind tore at the little boat and mountainous seas threw her about.
The ‘Jeanne Matilde’ has come from Singapore and Mr. King signs on crew members for short legs of the voyage. In 22 months he has covered nearly 7 000 miles.
Mr. King, who plans to reach Britain in the yacht said rounding the “Cape of Storms” was one of the toughest parts of the whole voyage.
“The gale hit us at dawn after we had rounded Cape Agulhas in fair weather. We ran from it, with 20-ft. waves making life uncomfortable. On Sunday it abated, and we found ourselves well out of sight of land.
“We got back on to course and on Monday morning sighted Danger Point. The rest was easy sailing”.
‘Jeanne Matilde’ is an unusual cruiser, built in Singapore for Rex King in 1953 to his own designs. She is 30 feet on the waterline and 11 feet beam, drawing about six feet and displacing 14½ tons. Her rig include rather strange-looking square twin-spinnakers and a square top sail for running down the trades. Fore and aft she is a “wishbone ketch” without a wishbone aloft, which must make this sail something of a handful at times. 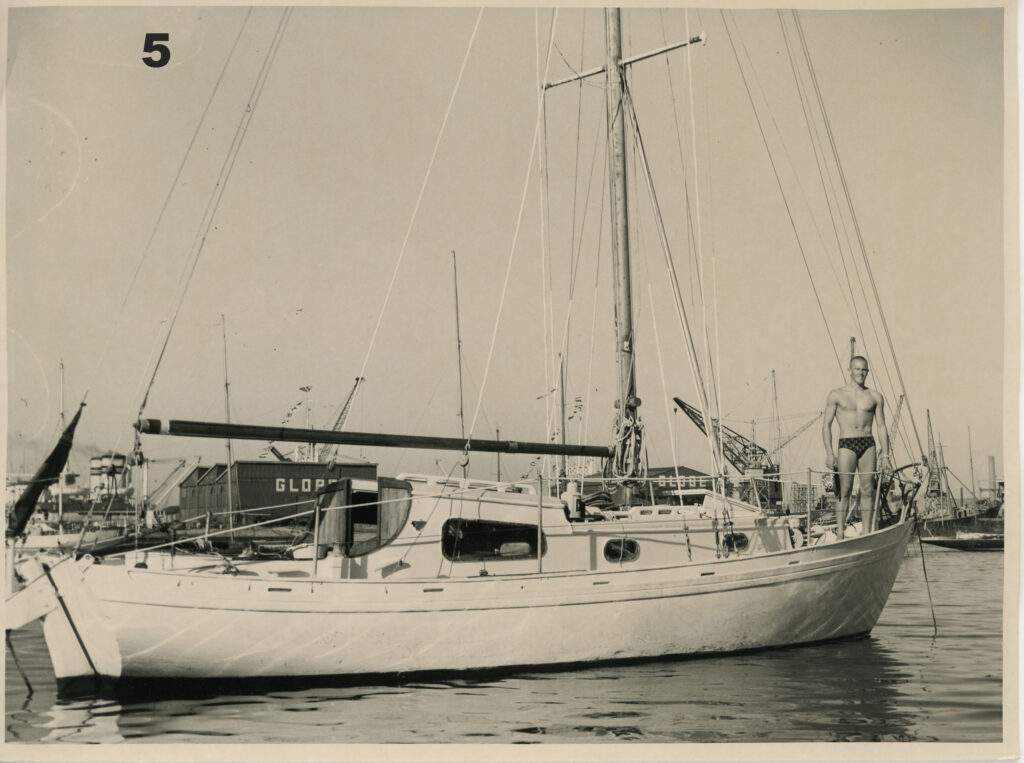 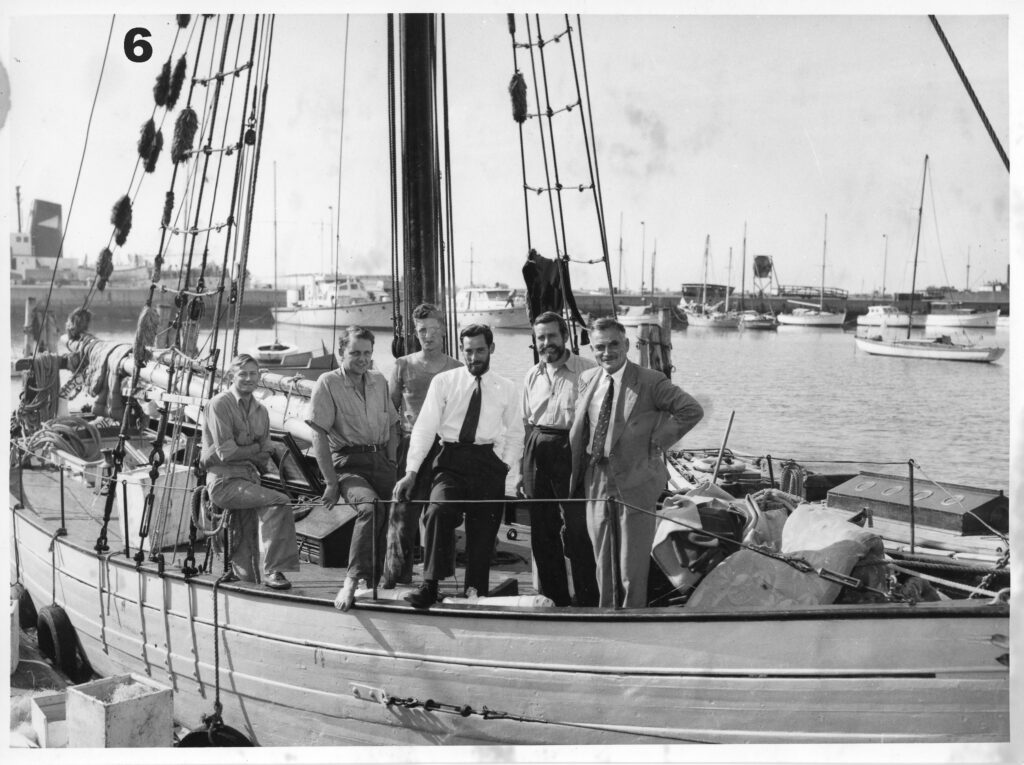 Pic 6. This is the ageing Bristol Cutter ‘Mischief’ which was owned and sailed by the distinguished Everest mountaineer Major Tilman ,who with Eric Shipton made some unsuccessful attempts to ascend Everest in the 1930s. In 1958 he sailed ‘Mischief’ into the roaring 40’s and was planning to climb some mountains in the Crozet Islands, but had to abandon the venture due gear breakages, massive seas and violent storms. Major Tilman in a suite is in on the right. 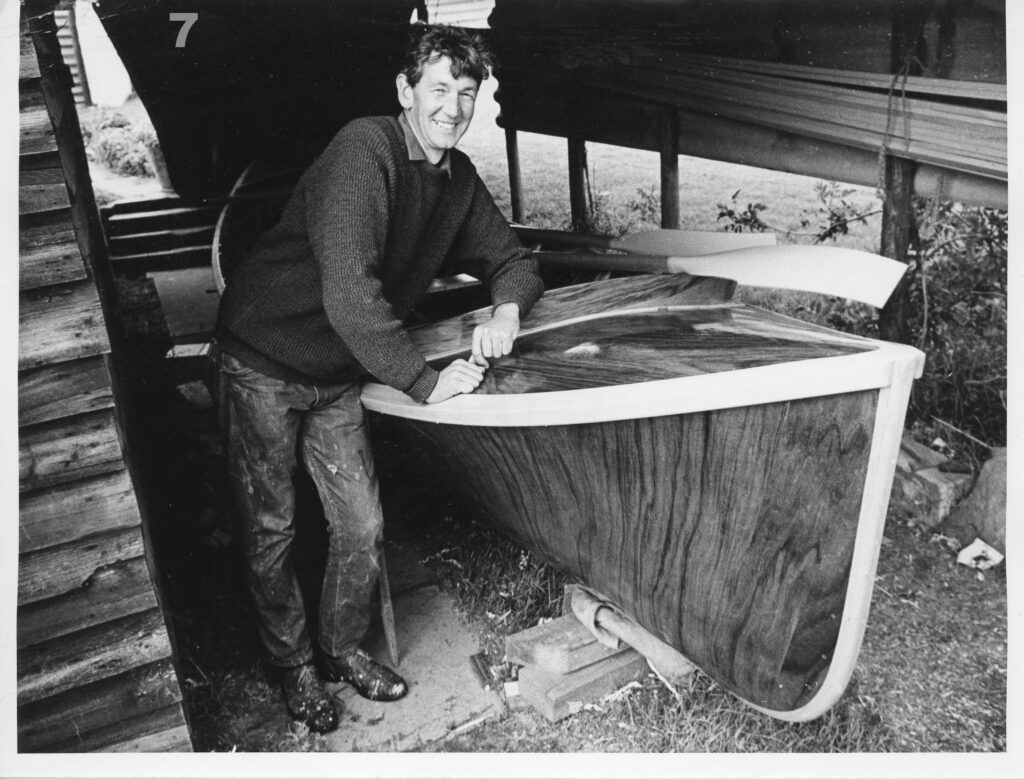 Pic 7. This is a very young Eric Bongers. He was given a contract to build some cold moulded ‘ Aussie’ type surfboats for local life saving clubs. They may have been sponsored by BP?

Pic 8. ‘Paregon 111′ (also know as P3) was the crack RCYC 45-footer – a heavy weather boat in the mid to late ‘50s. She won a number of coastal races to Port Elizabeth and Mossel Bay. Ivor Jameson was the skipper and joint owner with Basil Lindhorst. Her heavy weather status was usurped when Kees Bruynzeel thrashed her in the light displacement 30 ft ‘Zeeslang’ in a gale force North Wester in the Dassen Island race in about 1958. 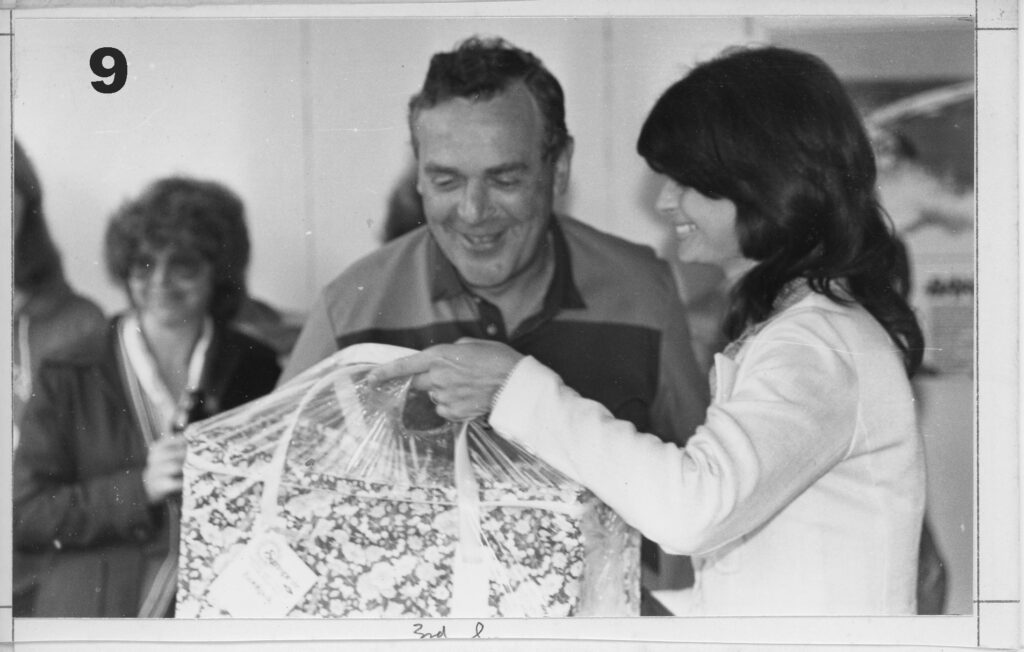 Pic 9. Don Mayhew being presented with a prize. 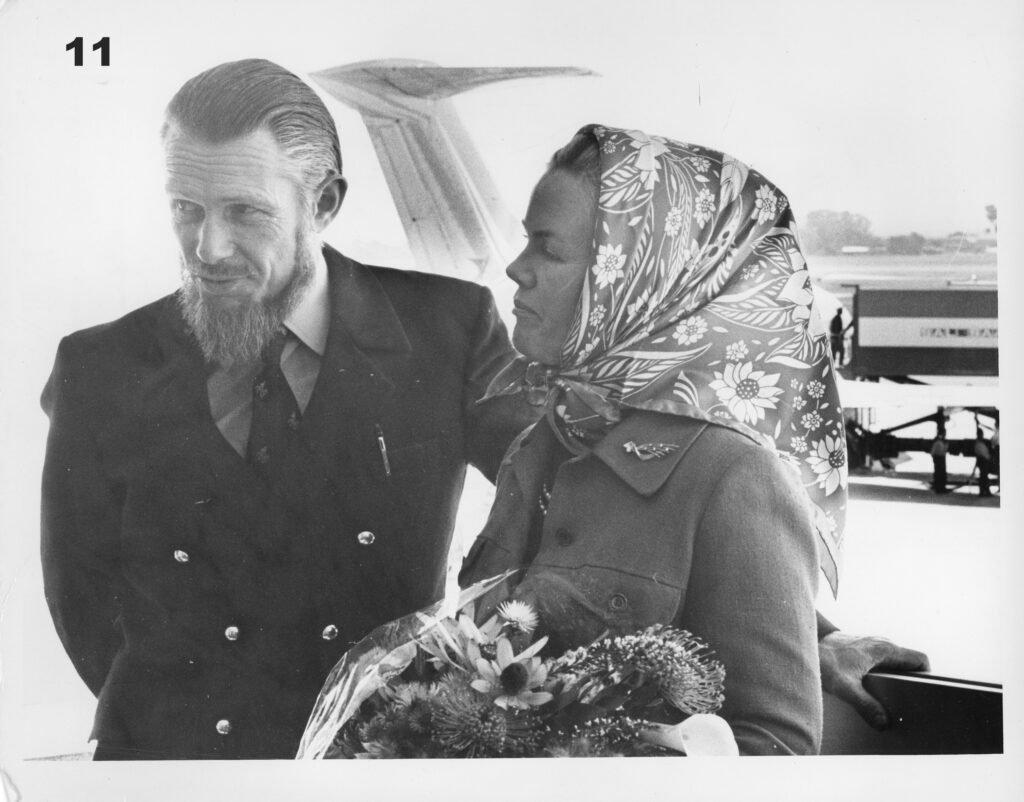 Pic 11. John Goodwin and his wife Laurel (possibly Lauren?). He first made a name for himself when he sailed his Vertue class cutter (25 ft) ‘Speedwell of Hong Kong’ solo from the UK to the Caribbean and from there, solo again to Cape Town in 1958.
He was the skipper of
John was skipper of ‘Albatross 2′ when she won the Cape to Rio Race in 1971. 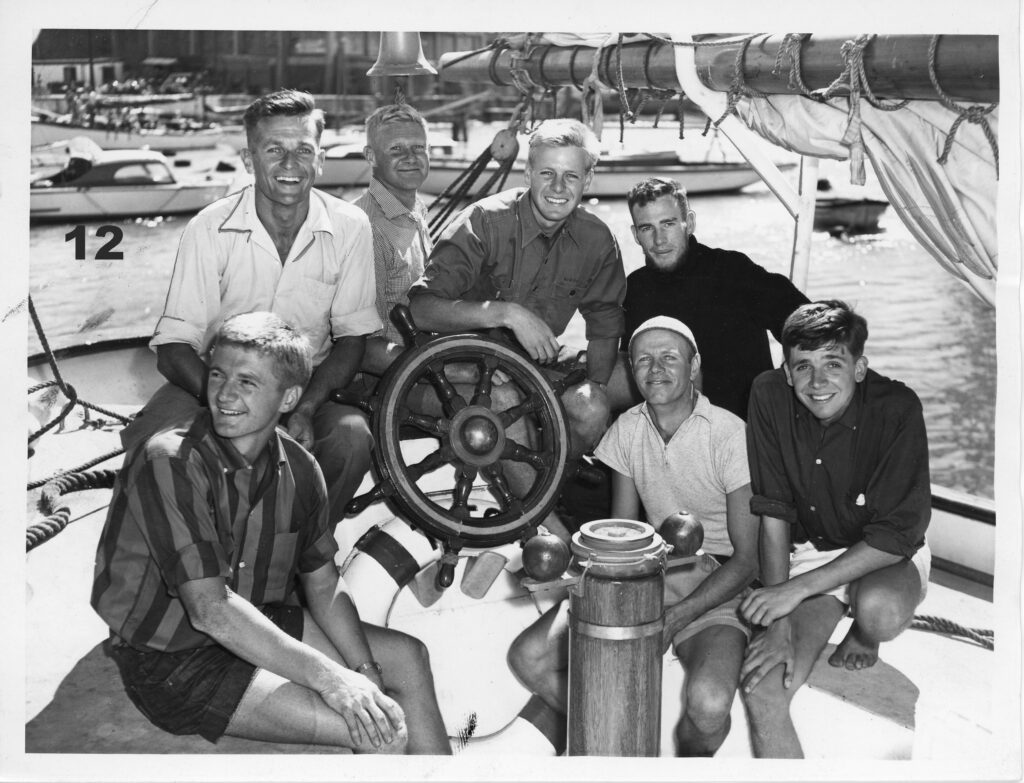 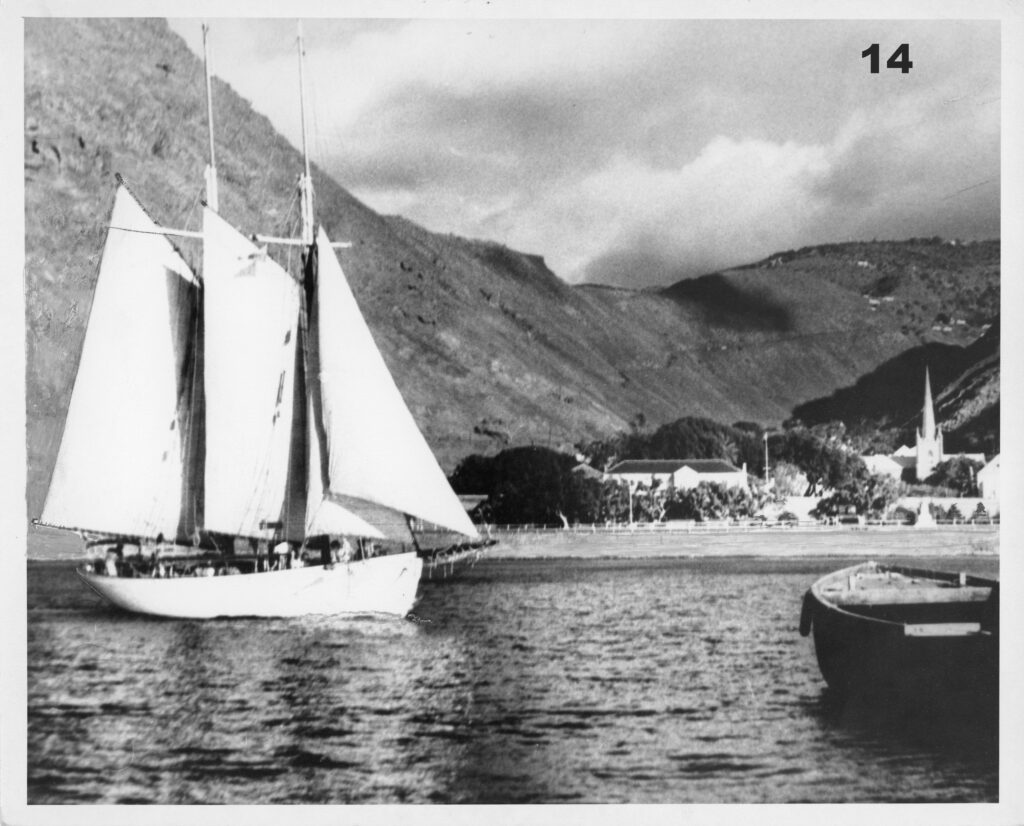 Pic 14. There is uncertainty as to which vessel this is, although it could well be ‘Cariad’. 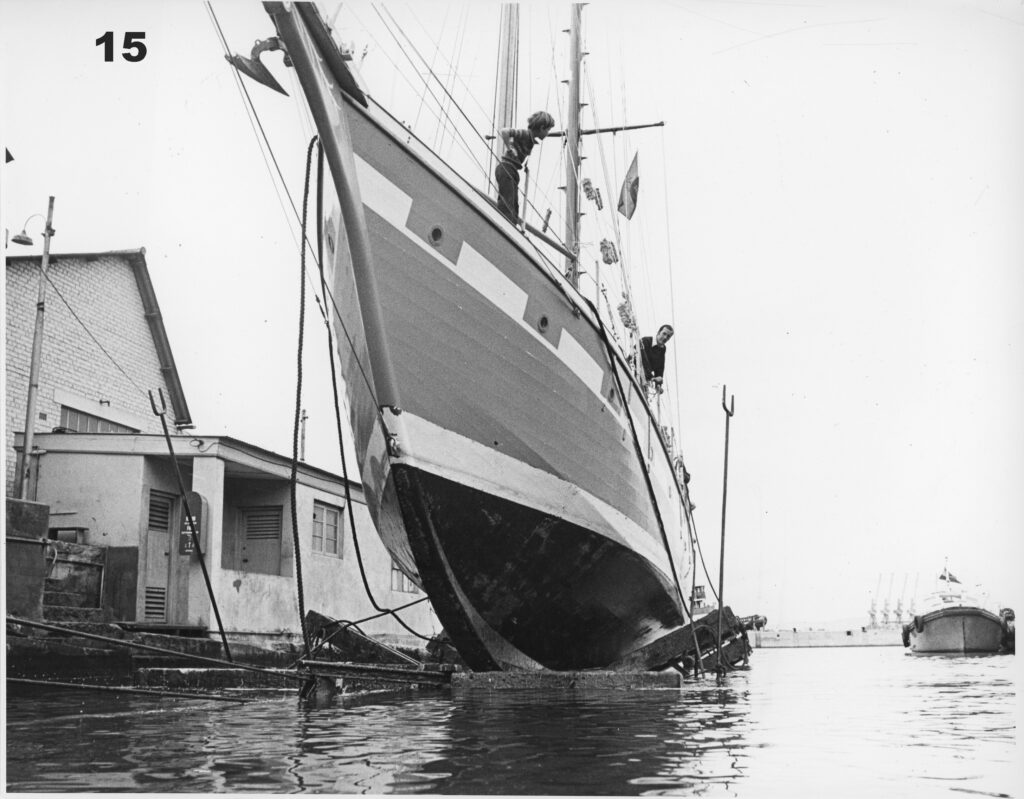 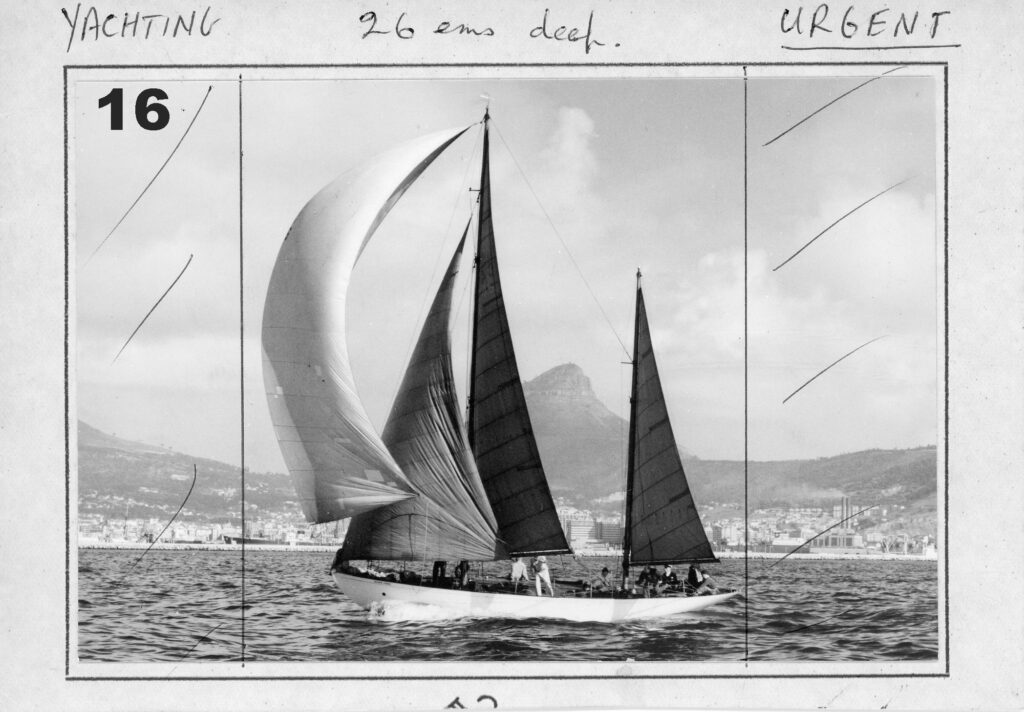 Pic 16. ‘Silver Streak’ a Bermudan ketch with the spinnaker “has crop and scan markings in my handwriting” said Stephen Flesch. Frans Loots responded that Bobby Bongers sailed it from Cape Town to Cyprus in the early 1970s and when they got there there was some kind of military invasion taking place. Turkey invaded Cyprus and the crew had to lie low with bullets flying in the port! 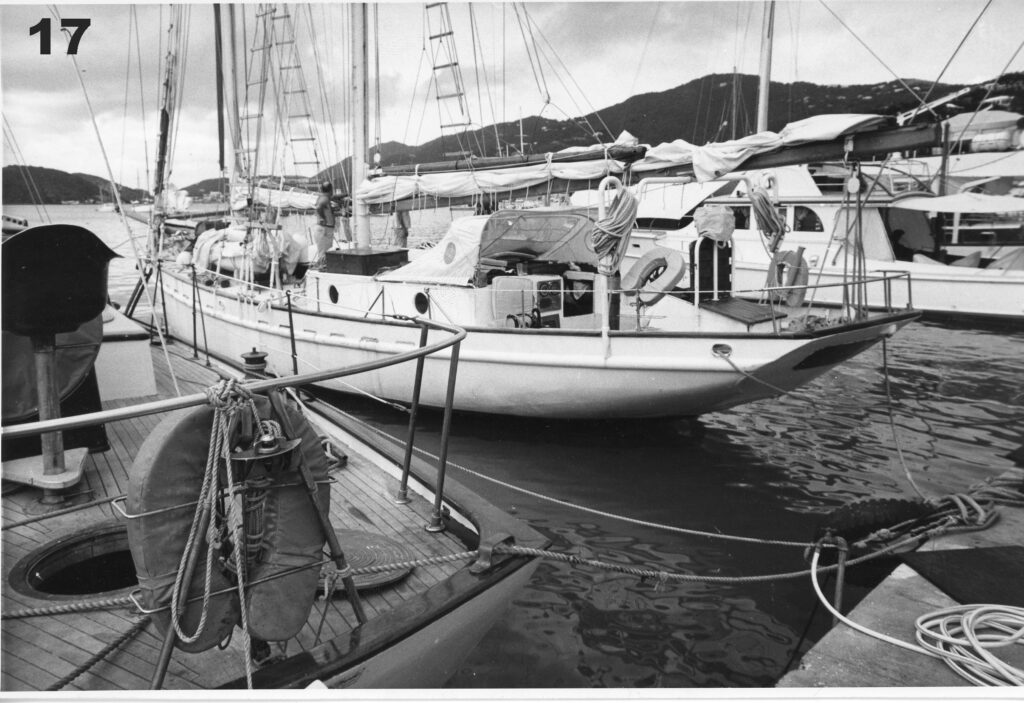 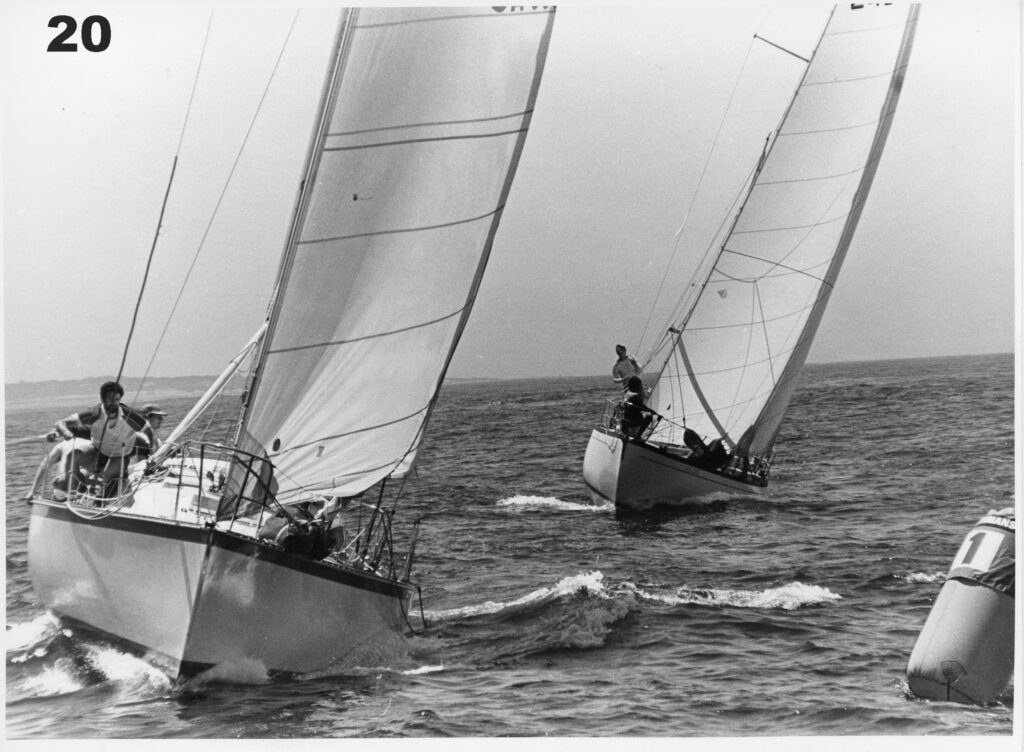 Pic 20. The Charger 33 ‘Four Love’ skippered by Sean Allardice ahead of ‘Avilion’ (Swan 43) skippered by Siggi Rogotski during a Rothmans Week.

Pic 22. This is ‘Adventure’, a British Defence Force entry in the first Whitbread Round the World Race in 1973, approaching the first leg finish in Cape Town. She was a Nicholson 55 and finished in the race overall behind ‘Sayulla’. 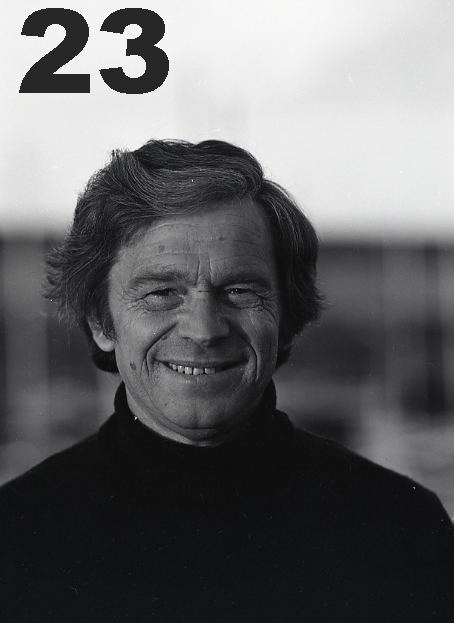 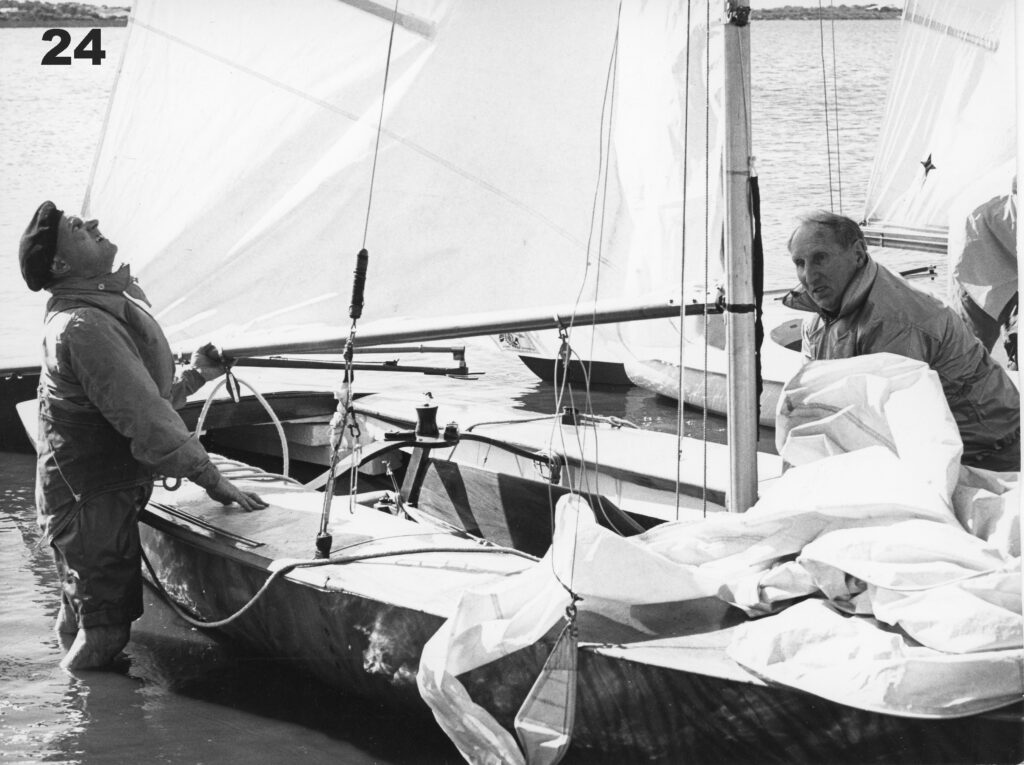 Pic 24. There is confusion as to who really is depicted here. Dave Elcock thinks it is Graham Garlick and his crew whose name he cannot remember, while Brian Hallock believes the person wearing the beret is Stephen Flesch, with the other person being Pat Catesby. According to Brian Hallock they were launching the FD off the slipway at ZVYC in about 1965. 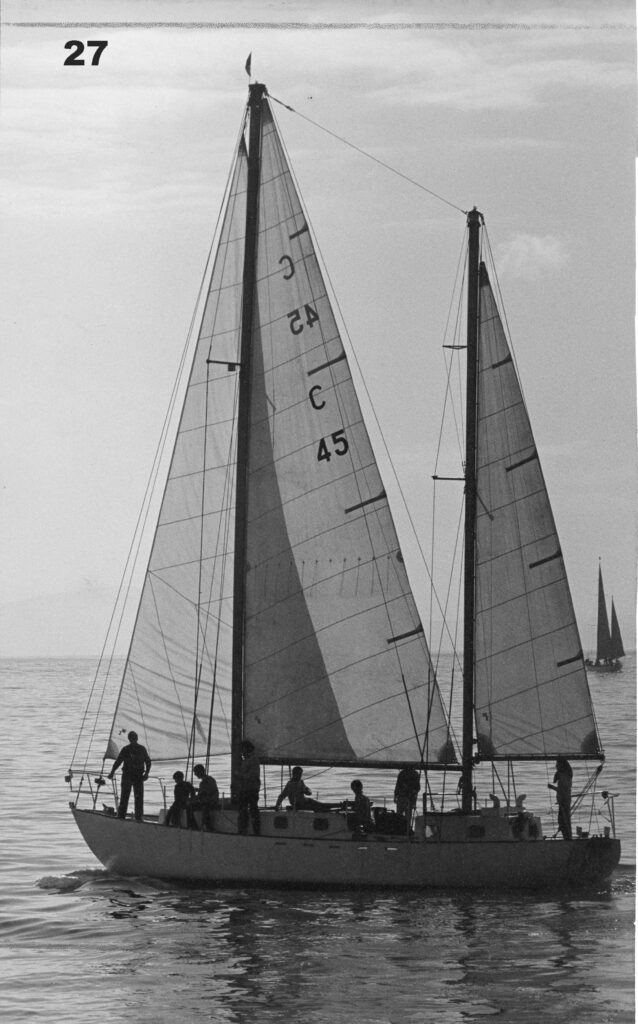 Pic 27. This is a Bongers 39. Two were built at the same time – ‘Outburst’ and the other possibly for Bill O’Reilly. 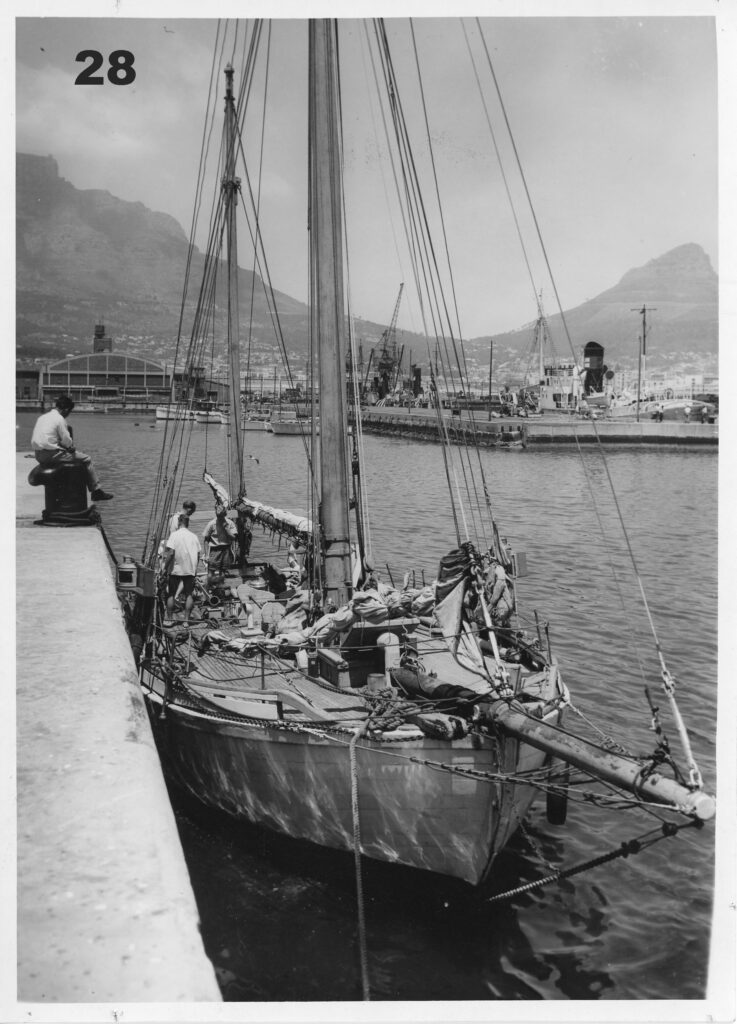 Pic 28. This is ‘Sandefjord’, a former Scandinavian lifeboat with very heavy scantlings (25 cm sq oak frames with 7.5 cm thick pitch pine planking). She sailed out to South Africa in the early 1950s. According to Stephen Flesch she was once owned by Pim Penso, an RCYC member. 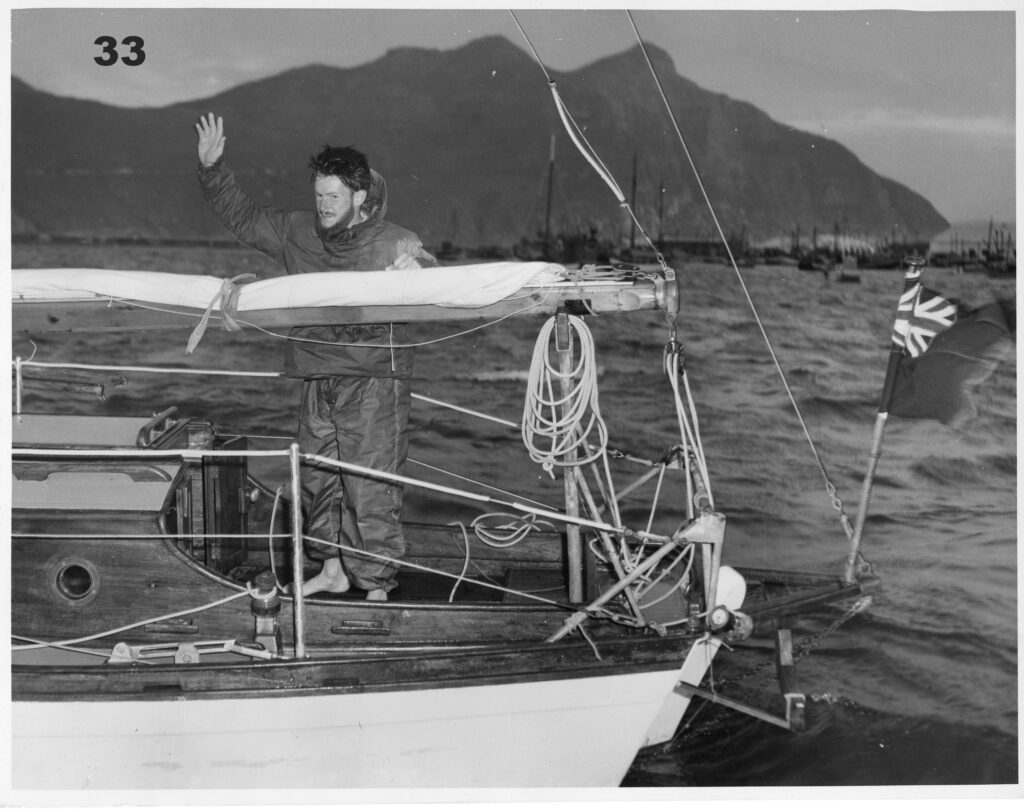 Pic 33. This is a very young John Goodwin arriving in the 25ft Vertue class ‘Speedwell of Hong Kong’ at Hout Bay after an ocean crossing in 1958. His solo passage from the UK, to the Caribbean and onwards to Cape Town, circa 1959/60 was at the time considered to be “record breaking” for a 25 ft yacht. ‘Speedwell of Hong Kong’ has in recent years been converted to a junk rig and is being cruised solo in the Far East at present.