The open beach must be braved by small craft who stage regattas off Durban – and here the Hobies make a bonny sight over the dunes at their recent Nationals which are reported inside. These cats have brought 1 000 newcomers into boating, with 840 sail numbers among the 14s and 160 already for the 16s.

Durban was the venue for the 1976 Hobie Nationals. And it got off to a rather ignominious start as after the first race had to be called off after a strong south-easterly sprang up and the guard ship, ‘SAS Reijger’ lost her anchor in the rough seas. And not only that, but apparently the bosun fell overboard as well and luckily was none the worse for the mishap!

The entry was good with 54 Hobie 14s and 49 Hobie 16s, with a team being selected for the World Championships.

Peter Collard & Barry Wrankmore, Gordon Monsen and Barry Loubser with Sean Ferry as crew were the top 16s, with Mike Homsey, Duncan Lethbridge and Leonard Mann taking the honours in the 14s. 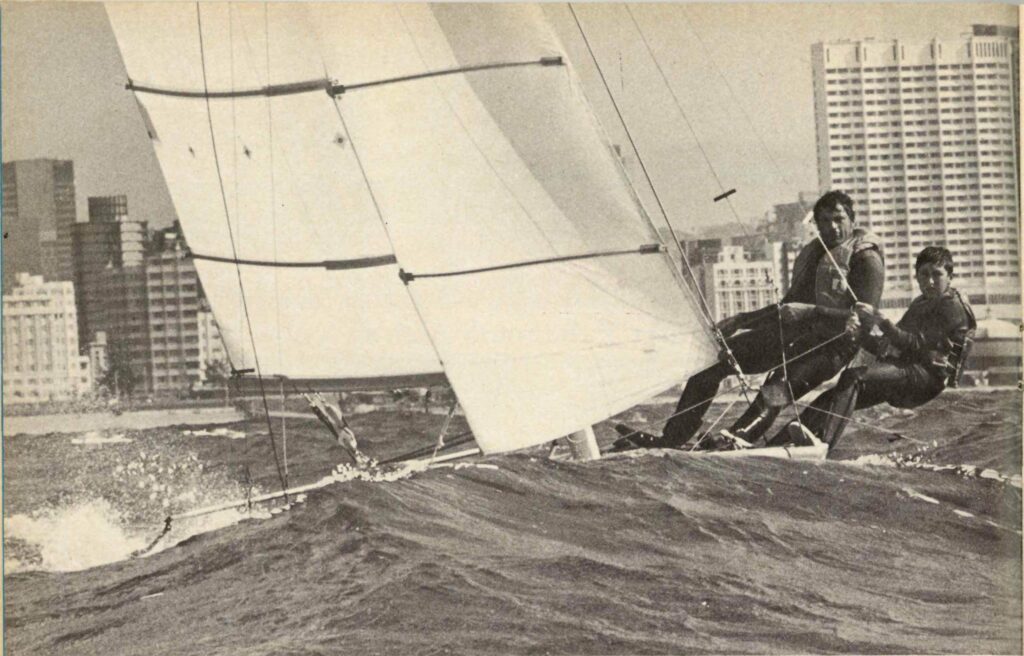 The youngest competitor in the Hobie 16 Nationals was 14-year-old Shaun Ferry of Fish Hoek who sizes up the big swell rushing at their cat with all the aplomb of a veteran. With his skipper Barry Laubser, he will have the thrill of a free trip to the world championships in Hawaii.