The Frank Wightman feature I ran about a week ago certainly created immense interest, so when I came across a file labelled “Frank Wightman” in the archives a few days ago, I had to stop everything a read it.

Basically it consisted of two letters to SA Yachting Editor, Brian Lello, and made reference to the ‘Mischief’ article, so I searched the SA Yachting pages and found the article. It was an intriguing read as it was all about Major Tillman’s gallant effort to reach the Crozet Islands in the southern Indian ocean, a distance of about 1660nm from Cape Town.

The final element was what appears to have been a magazine cutting, entitled “Stormy Weather”. 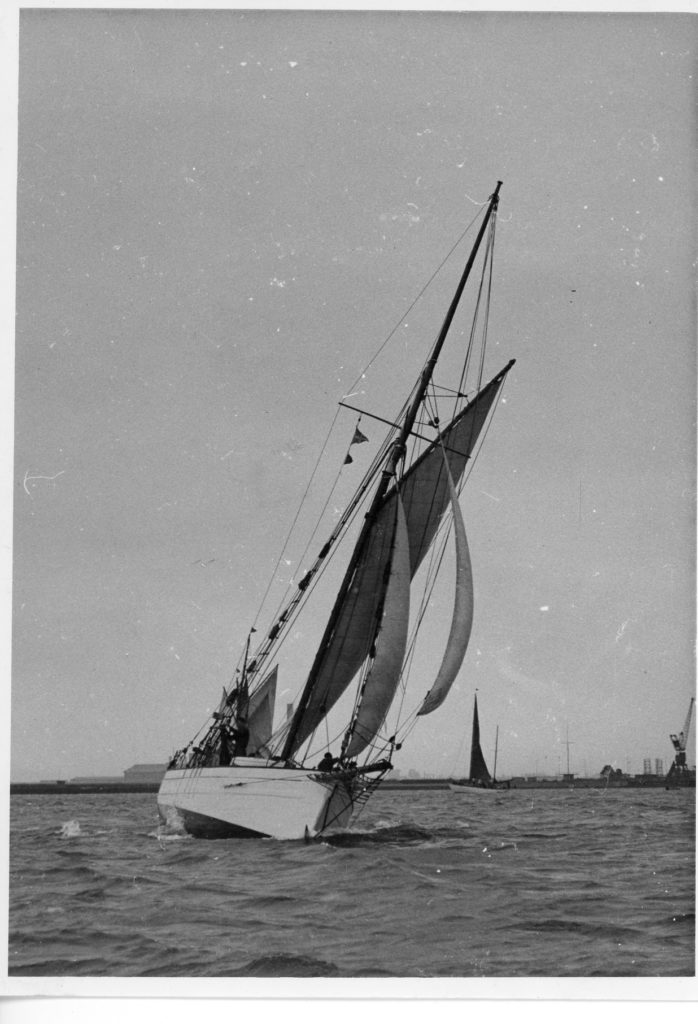 Mischief – in all her glory!

The ‘Mischief’ article makes fascinating reading, especially when this very short extract gives one a picture of exactly what happened:

“The skipper was at the tiller when a breaking crest and a few tons of solid water drove headlong at the taffrail, and ripped all the after part and starboard side of the canvas dodger away from the stanchions, breaking off two of them above the sockets and bending several others over”.

A few paragraphs later, the scene had changed dramatically as described here: “At a quarter past six the ship was struck by a sea on the port side.

“The remainder of the dodger and its stanchions capitulated. The quarter boards on either side were stove in, and the port coaming of the cockpit started inboard, carrying with it all that side of the cockpit wall and one of the deck planks.

“The remainder of the sea wept over the decks, crashed onto the main skylight, spurting through every hinge and seam. One of the tyre fenders went before it with two heavy blocks on lanyards which had been coiled down in the centre of the tyre.

“Spars and boom lashed to the deck were unshipped and rolled about the boards, as did two of the heavy drums of oil.

“In a final ingenious burst of fury the wave took the dinghy, which – with its contents of a bag of anthracite, two tanks of fresh water, the working jib folded and lashed to the thwarts and several coils of 2-in. manilla rope – was launched violently over the bow and was not seen again. The guard rail stanchion over which the boat was thrust was bent outwards at a right angle.

“Except for a short length made fast to the pin rail, every piece of the hemp lashing over the dinghy was burst away from the ring bolts in the deck.

“No trace was left of boat or contents.

“A lot of water had already been shipped, and enough of it escaped below to cover the boards in the saloon. So as soon as the chart room was cleared of spilt tool boxes, and water had stopped pouring through the forced ventilator and the leaky skylight, a start was made to pump it out.”

The above is a very good read, as is the article entitled “Light on Far Horizons” which is a round-up of some little ships’ voyaging.

I have specifically included this as there is a vivid description of Miles Smeeton and the thorough beating ‘Tzu Hang’ took, which included a pitch-pole, in the southern ocean. John Guzzwell of ‘Trekka’ fame was aboard too, as was Smeetons wife.

The two letters I mentioned up front are appropriate here as Wightman in his letter to Brian Lello was pretty forthright in his views. Lello titled this letter “Wightman on Heavy Weather”, and search as I may, it does not appear to have been published.

The second letter is of a more personal nature, but due to the 63 year passage of time since it was written, can I believe, be published here as it makes reference to his time on the Langebaan Lagoon way back in 1958, as well as his lifestyle.

And finally, the “Stormy Weather” editorial completes this marathon feature.

Enjoy, keep an open mind, and most importantly, please learn from the seamen involved in these editorials.