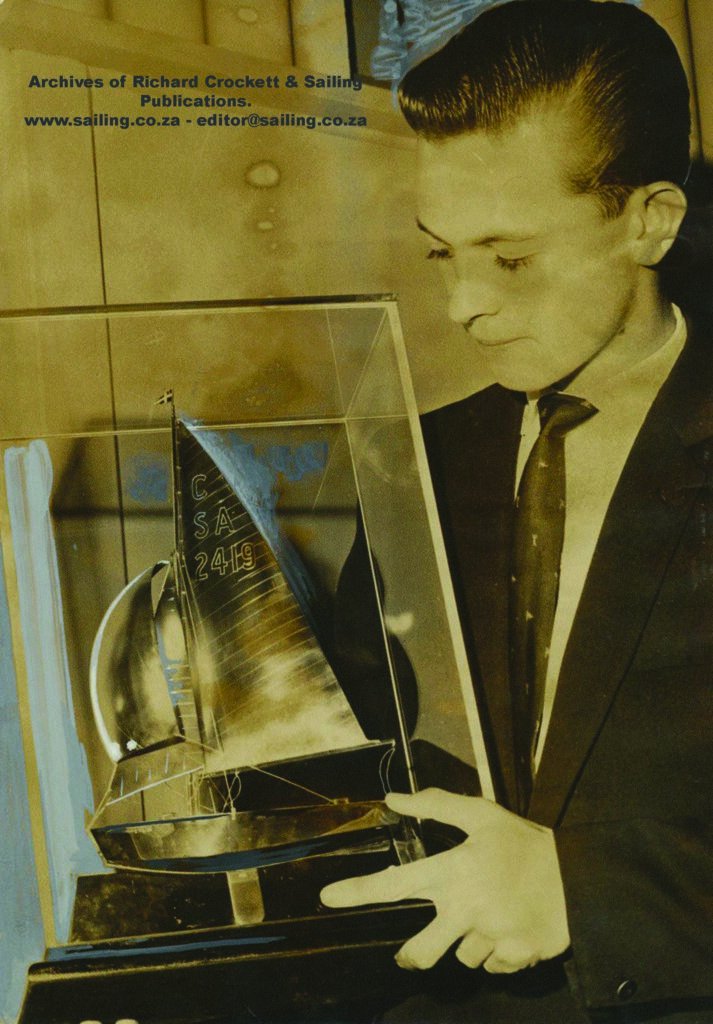 This pic first appeared in SAILING Magazine in October 2013 under the “From the archives – a blast from the past” – an editorial and pic page published every month, and which had a wide following.
Immediately Dave Hudson received his copy of the mag, he sent me an SMS (pre-WhatsApp days!) advising that the young man holding the Cadet trophy is Denny Moffatt, a lifetime sailor who hung up his Laser dinghy sailing boots several years ago now.
Moffatt told me that this was the first and last time he ever beat Dave Hudson in a yacht race, so that trophy has a very special place in his heart!
That Cadet trophy is still in the PYC trophy cabinet.

I stumbled across a folder named “Cadet Dinghy” this morning and thought it would be of interest, but alas just two pics featured along with the International Cadet Class rules and regulations published in 1960.

And while looking for more Cadet info I came across some interesting pics from yesteryear which I simply had to share. 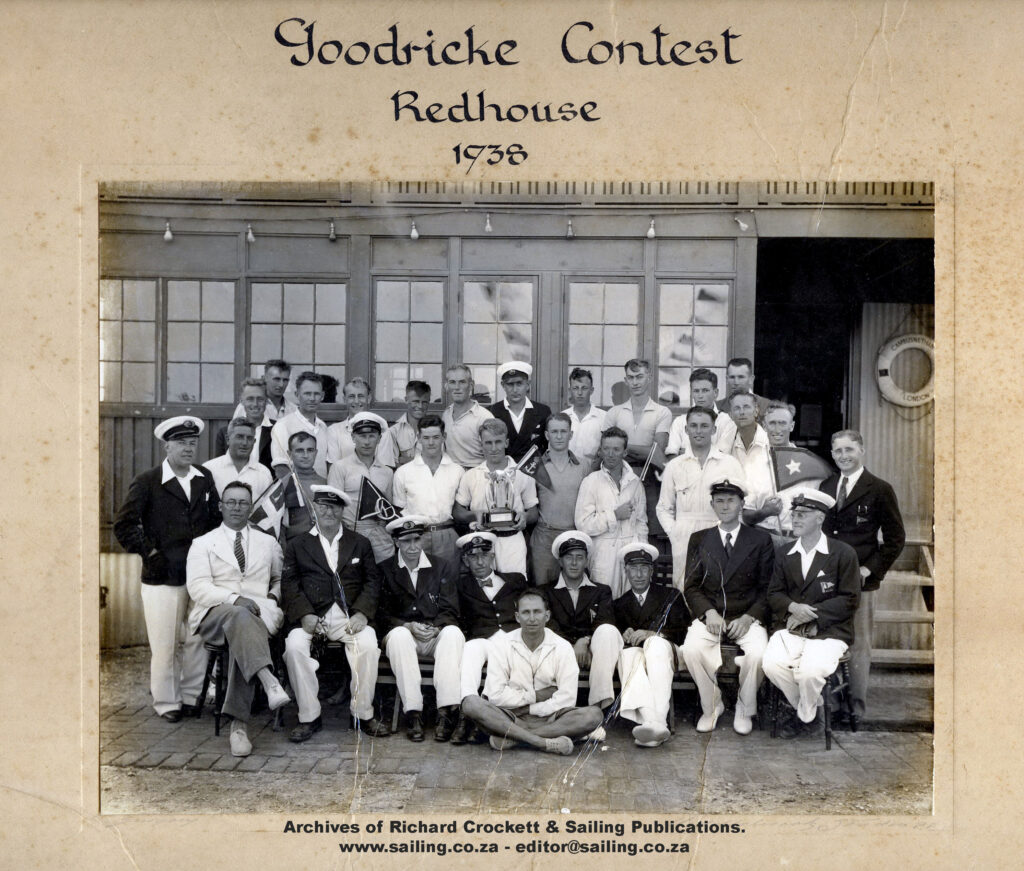 The first is a pic from the Goodricke Contest in 1938. The history of this contest is as follows: As the Twenty-five Footer and Twenty Footer scows had dominated attention in most centres, the 16-footer made its presence felt, after success overseas where Uffa Fox and Morgan Giles designs had become popular, and it soon established itself in Durban and Port Elizabeth.

George Goodricke, a Royal Natal Yacht Club man had previously established the Inter-Port Trophy, was responsible, in August 1925, for introducing the Interclub Trophy for 16-footers. The deed of gift stated that class should foster the sport of yachting in all suitable centres of South Africa, and bring together yachtsmen ‘in sporting and friendly contest’.

This was a restricted class with a maximum beam of 6 feet and carrying a sail area of not more than 175 sq ft.

The first races for the new trophy were run at Zwartkops, and history relates that as a special concession the Royal Cape was allowed to enter a Fourteen Footer Redwing for the contest, and was given a time allowance. The Redwing tied with the entry from Zwartkops, and a deciding race, won by Zwartkops, was sailed.

The 1938 event was sailed at Redhouse and was won by ‘Faith’ sailed by A Thomas for the Royal Cape Yacht Club.

Terry Gilman provided the following additional information about the class and the 1938 event.

The Goodricke Regatta was a Championship event, so each club sent its best sailors only. A major restriction in the Deed of Gift (Rule No.7) was on ownership and crew as it stated the regatta was “for Corinthians only,” so Herby Spradbrow, the famous Durban boatbuilder, was not able to compete!

The photo shows the Goodricke crews, including Eric Budd of ZVYC proudly holding their club burgees. Their Managers are in a semi-naval uniform.

Looking at the pic and knowing that it was the 1938 event, I can only assume that the person holding the trophy, and an RCYC burgee, is A Thomas – the winner? 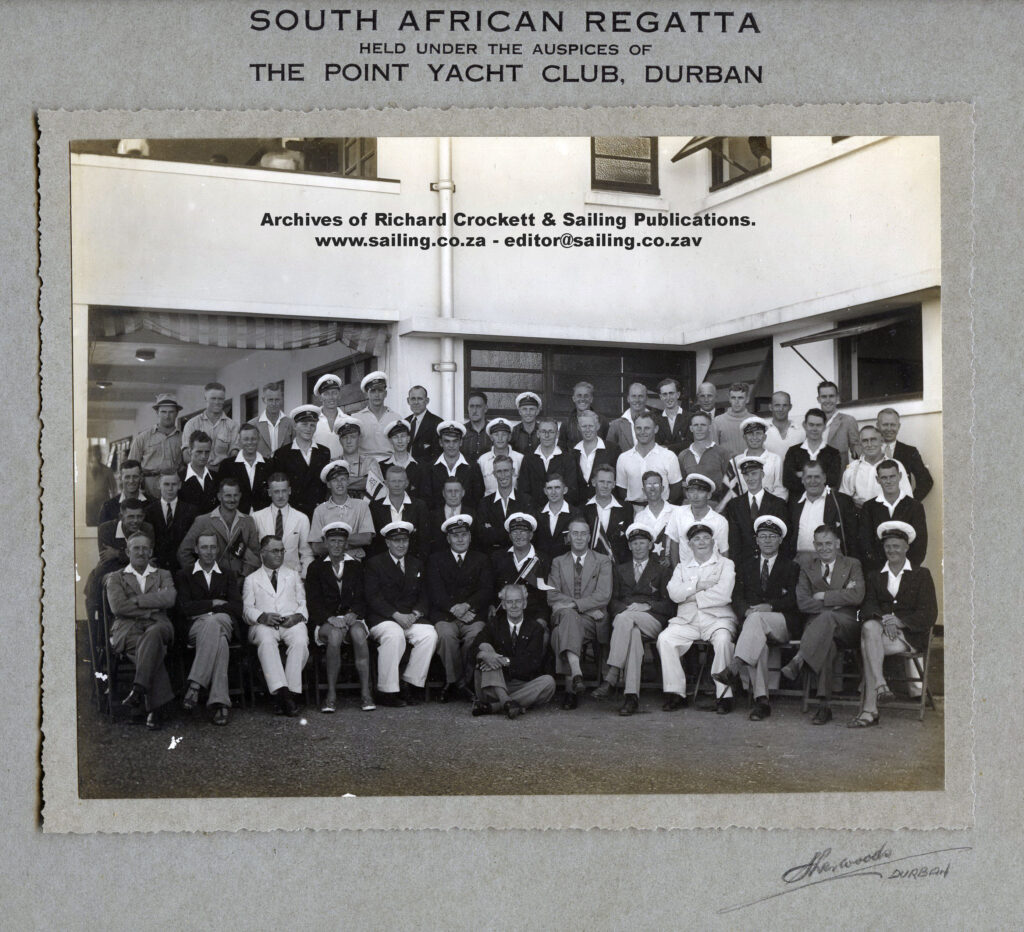 The second pic was taken at the 1947 South African Regatta which was held in Durban and hosted by the Point Yacht Club.

“Yachting in Southern Africa” by Anthony Hocking says this:
“Yachting at Port Elizabeth had been in its hey-day in the years before and after the war, so it was not surprisingly the delegates representing Redhouse and Zwartkops at the 1947 Interclub Regatta in Durban urged the formation of a properly constituted national authority to administer the fast-growing sport. All South African clubs interested in interclub racing would be represented. This was the origin of SAYRA – the South African Yacht Racing Association.

“The new body’s original function was to arrange the interclub contests at different clubs each year, where trophies presented for the different classes would be raced for over courses usually about 9 miles long. The competitions for the classes generally consisted of two races – one for the Inter Club Trophy for the class, the other for general entry.”

Terry Gilman was again able to supply some info on this pic too, saying that it was at this event that the Sprog “electrified the sailing world as it planed and could easily be righted, giving impecunious ex-servicemen a cheap, planing dinghy.”

In his own words, “these two photographs, 1938 and 1947, pre-war and post-war, are landmarks in the history of South African yachting.”

Results of that 1947 regatta in Durban are:


** NOTE. Alert readers will see that ‘Sabre’ won two trophies sailing the same boat for two different Clubs. A search in my archives via a different reference shows that S Harmer sailed BOTH events for the Point Yacht Club (PYC). 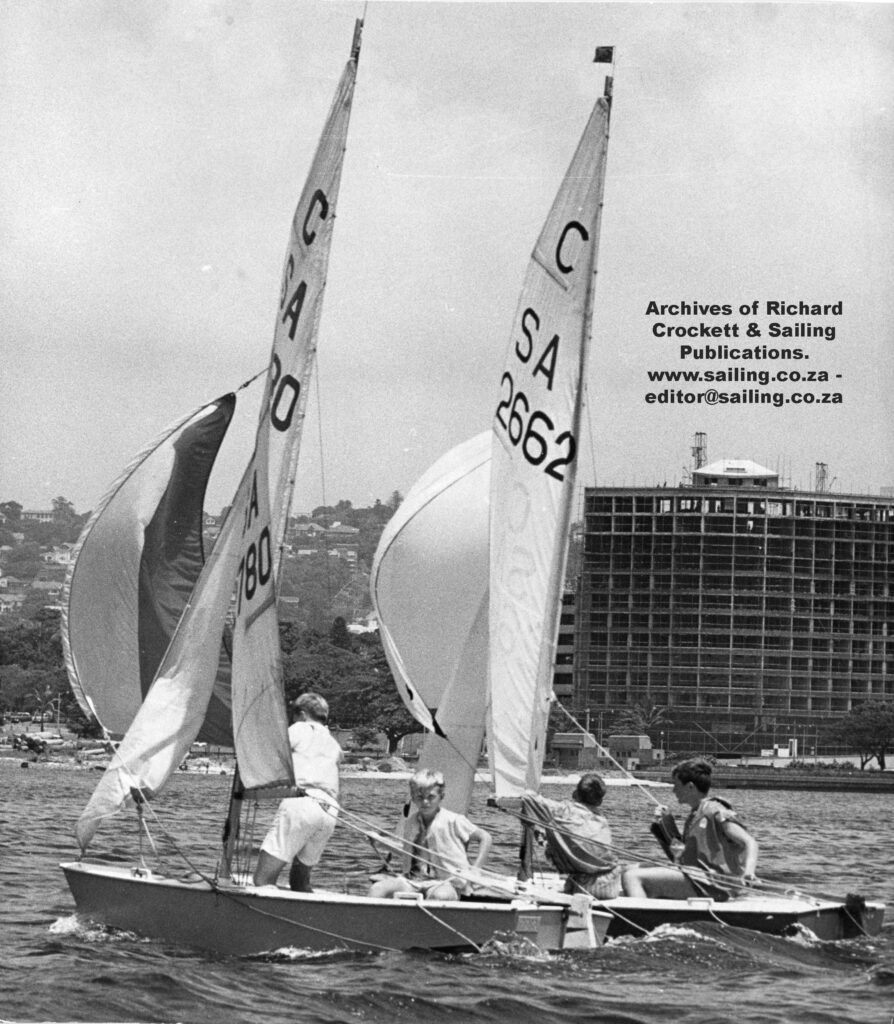 Bruce Walford, with Christopher Keal as crew (in foreground) and Trevor Donald with Machal Mundy fight it out during the final race.