“Talking Sailing” From My Archives. Albatros Has Rio Race in the Bag 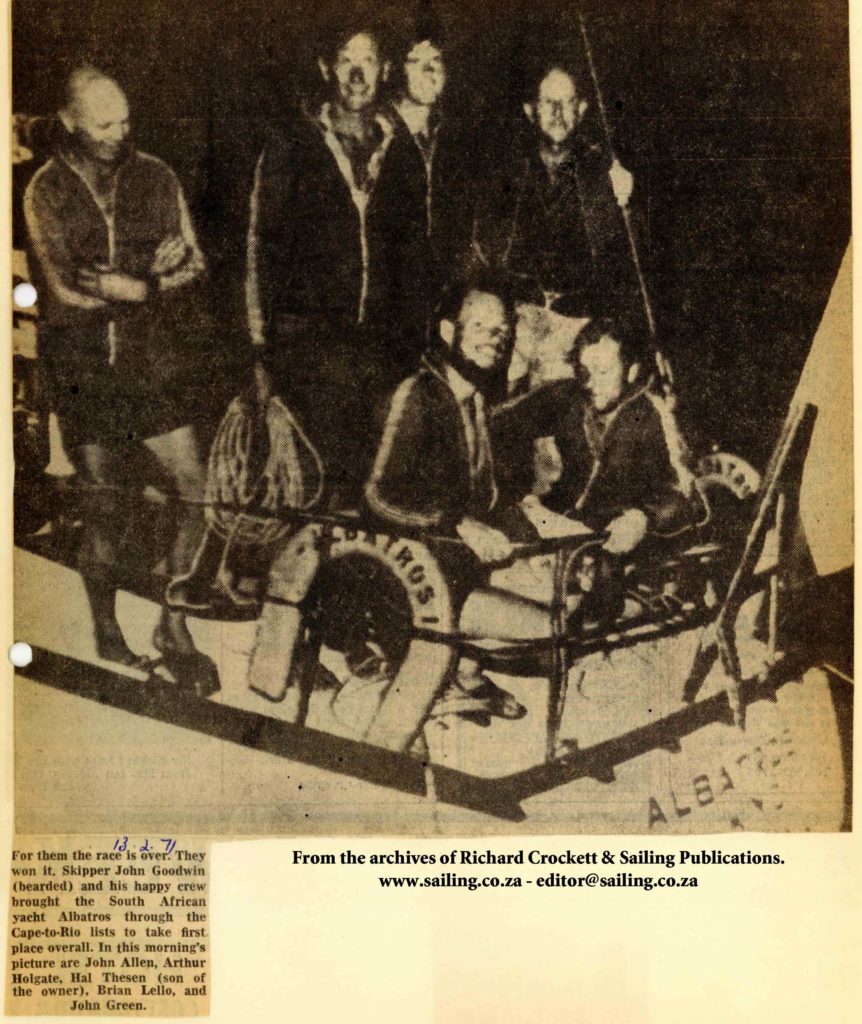 ‘Albatross II’ and her crew hog the headlines again today after their well deserved victory – and why not? They sailed a great race and were rewarded for their tenacity and never give up attitude.

But for me, 50 years after the race was nearing completion, I feel a sense of pride as the longest trans-ocean race in the world at that time, had a highly successful conclusion, and continues to this day to attract entries for what in some circles is known as the “milk run” or a passage across the “nursery slopes”. It took vision and commitment to get this race off the ground – and the sailing world stood up, took note, and then embraced it fully.

For me the stories being told in Rio, and the statistics from ‘Tafelberg’ are fascinating. In the reports below, ‘SAS Tafelberg’ travelled over 10 000 nautical miles in the first month of the Rio Race, and was still on duty in the South Atlantic as the race came to a close. The Navy pulled out all the stops and did everyone proud. Well done and thank you.

Some of the human interest stories, too many to mention all, that caught my attention today are these:

Bearded skipper John Goodwin said after the race that if it had not been such an important race he would have turned back after ‘Albatross’ had damaged a mast 90 minutes after the start of the race on January 16. “We decided however to continue and we tied a bar to both ends of the curve in the mast and used a winch-like apparatus to straighten out the mast We lost five hours in the process and also lost a cross·tree, but a magnificent effort of team work pulled it off”, Goodwin said.

Knysna as a town was “agog” with excitement when news filtered through that ‘Albatros’ had won. When the news hit Knysna yesterday afternoon the siren at the Thesens factory resounded all over town, and Mr. Stent reported having had telephone calls from all over the country.

And the bit I like the most was the discussion in Rio between Bobby Bongers, Ken Warr and John Goodwin. It read like this: “Bongers, Warr and winning handicap skipper John Goodwin agreed over coffee that freak conditions had applied in the South Atlantic during their crossing. Theoretically they said, ‘Albatros’, far south of the others, should not have pulled ahead the way she did. But conditions were such that she could beat against headwinds faster than the more northerly·yachts could run and reach with the light tailwinds”.

Read all the news below in the 9 reports form “this day 50 years ago”.

“Albatros Crew Never Gave Up”. To any novice yachtsman keen to win races, nothing could hammer home the traditional lessons more dramatically than the success of ‘Albatros II’ in the Cape-to-Rio race.
READ MORE HERE:  1971 02 13 – Rio 1971 – Dave Elcock Collection -000546 – OCR 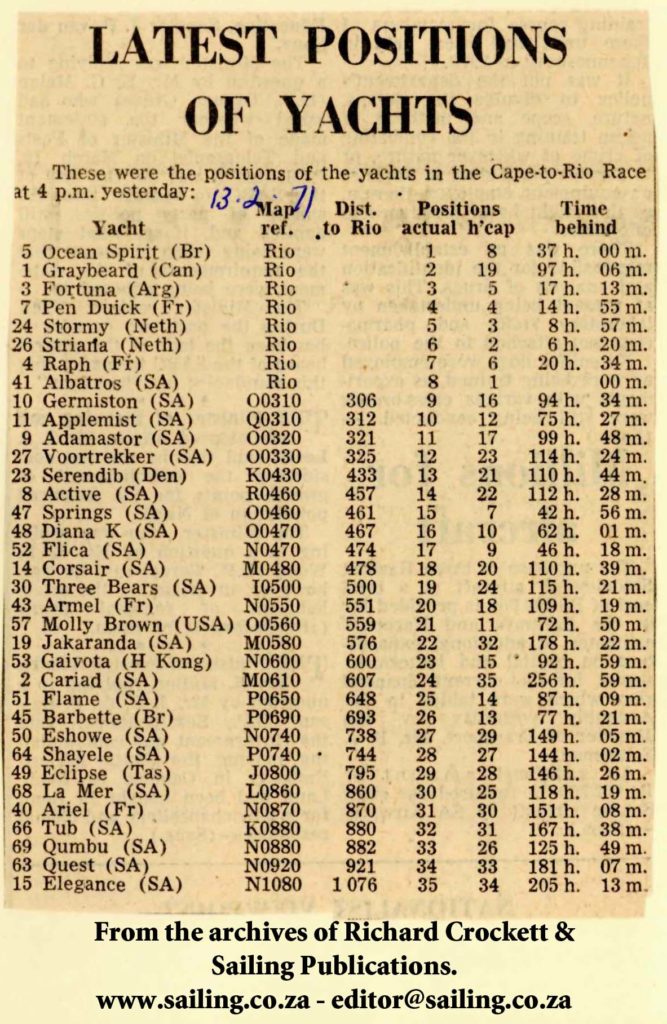 “Concern for All-women Yacht”. There is again concern about the whereabouts of the Rio yacht ‘Sprinter’, with its all-girl crew, and instructions have been issued to the ‘SAS Tafelberg’ to conduct a search for her.
READ MORE HERE:  1971 02 13 – Rio 1971 – Dave Elcock Collection -000429 – OCR 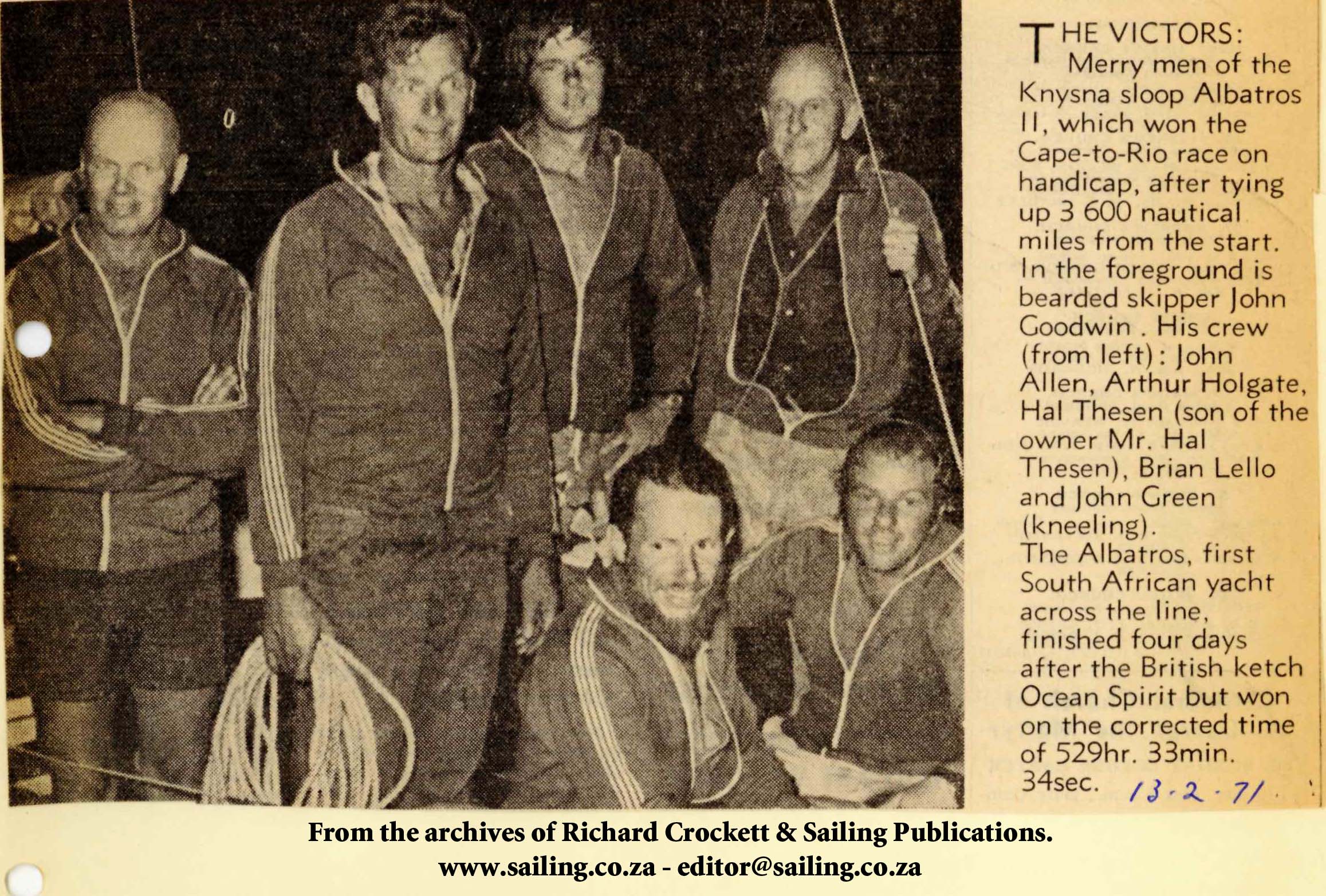