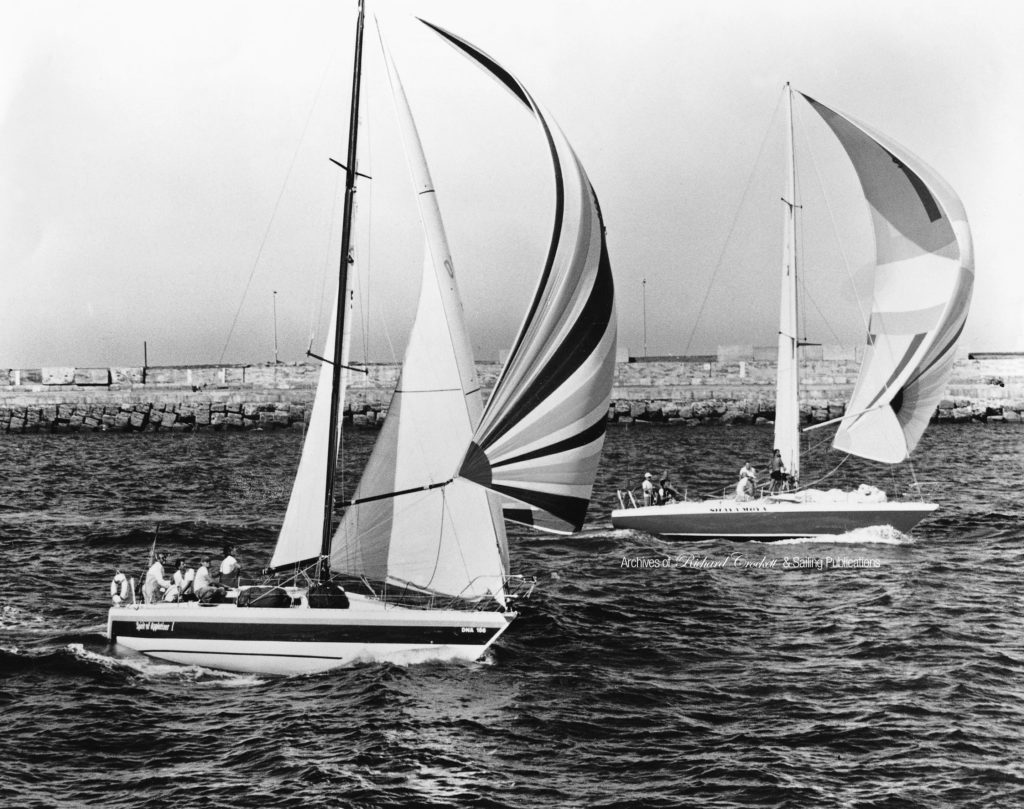 It came as an unxpected surprise to me when researching the Vasco da Gama ocean race that this year’s race, which starts on Sunday 16 May, will in fact be the 50th race to be sailed. Ten boats have entered.

That’s one huge chunk of sailing history which gives the race serious stature, and makes it the oldest ocean race in this country, in terms of races sailed, by far

It’s a race with a rich heritage, political infighting and a reputation for being tough – even super-tough.

Ocean racing is not for the feint-hearted nor for those wanting a nice jolly in the company of bikini babes and cold beer. It’s rather for those who relish the challenge of testing their skills against the worst nature, in terms of the sea and wind, can throw at them. It requires resolve, character and a large dose of uniquely South African “vasbyt”.

The Vasco da Gama Ocean Race started off in 1968 with a race from Lourenco Marques to Durban, and the presentation of the Barens Trophy for line honours. Seven races were sailed until politics and war put an end to it. 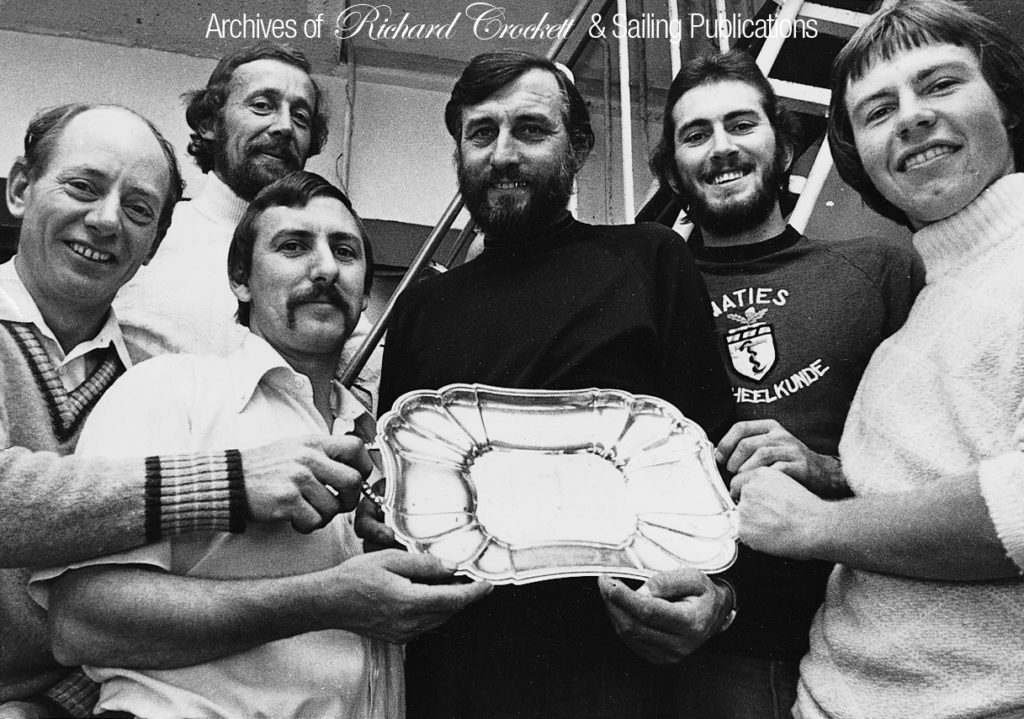 The crew of ‘Passat’ in the 1977 Vasco da Gama Ocean Race. In the centre of the pic is Siggie Eicholz, her skipper.
pic by Mike Rushworth

Those die-hards of the day were not going to let it die, so the course was switched as a race between Durban and East London, with 24 races on that course. The course along South Africa’s “Wild Coast”, with the fast south flowing Agulhas current plus the strong South Westerly wind blowing against the current, presented many challenges, and course options. It was quickly termed a “navigator’s race” due to the fact that navigators had three key course options when setting a course 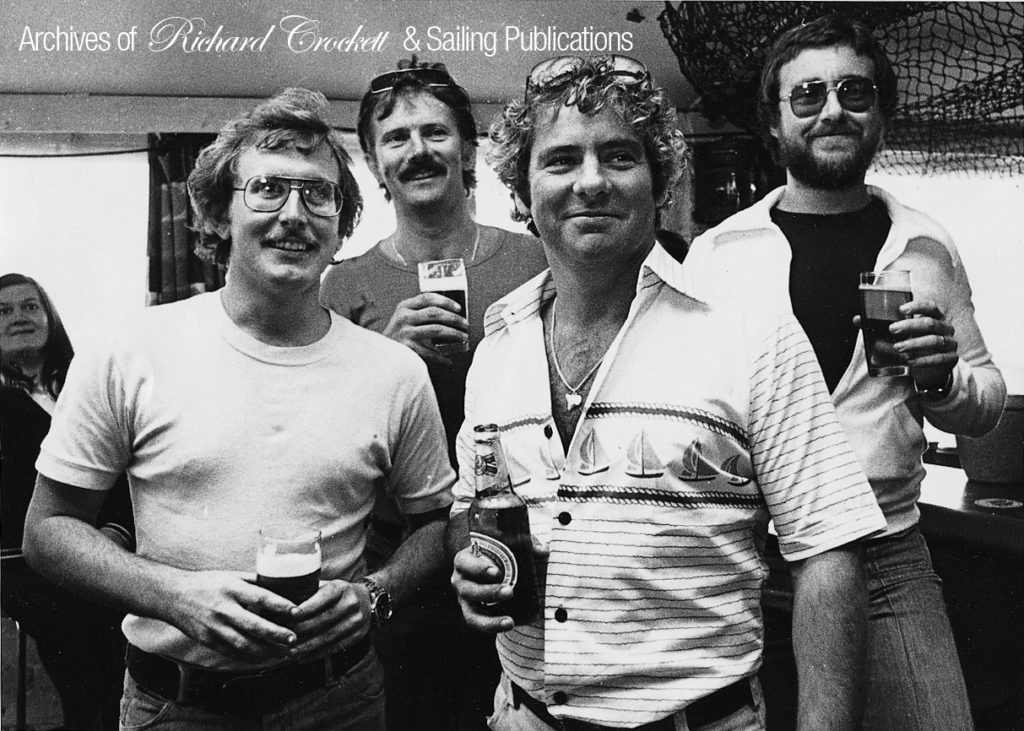 The crew of ‘Ambre’ in the 1977 Vasco da Gama Ocean Race.
pic by Mike Rushworth

These were the middle of the road option with an ability to duck inshore quickly if needed, the offshore option for those seeking to make full use of the fast flowing Agulhas current, or close inshore all the while hoping for a strong land breeze at night.

Each was tried and tested, and while there is no “correct” route, each option has produced a winner, and each option brings with it unique challenges. 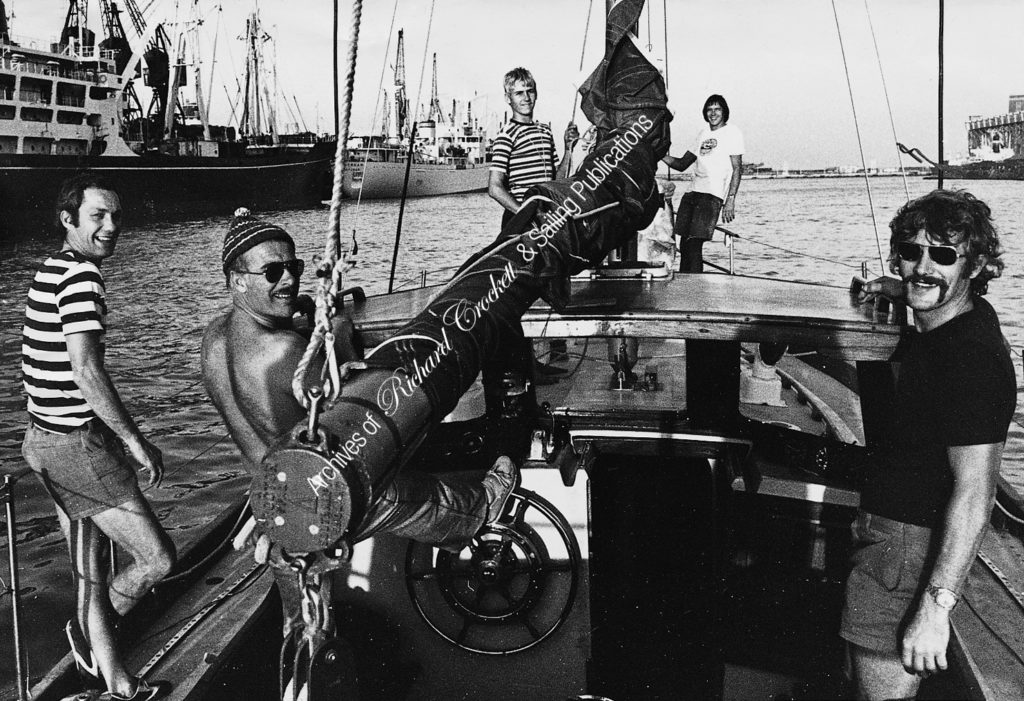 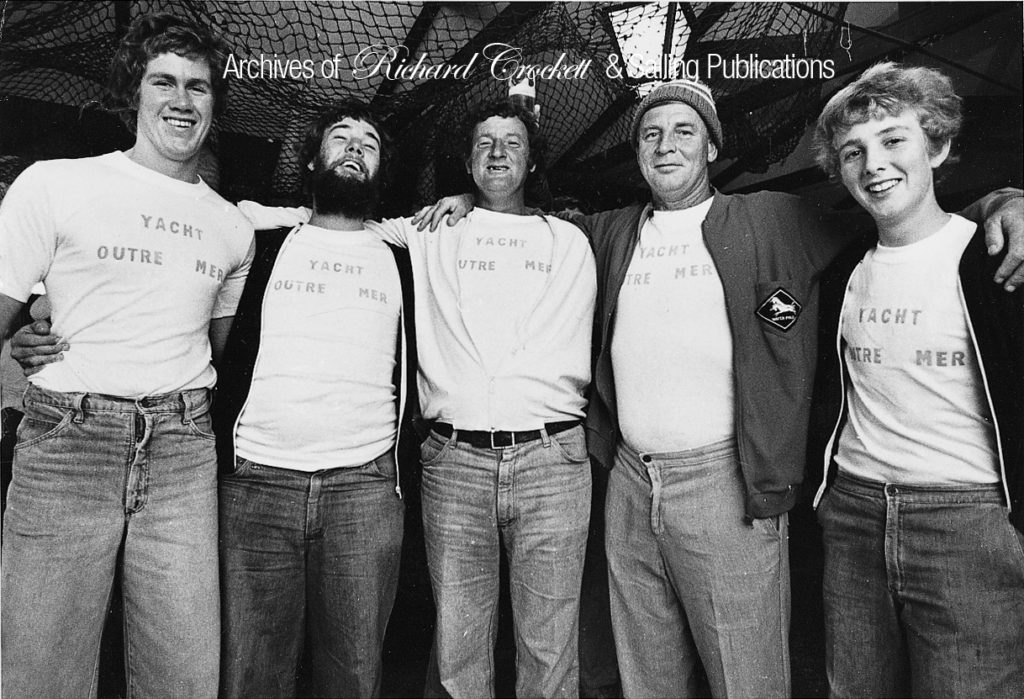 The toughness of the Durban to East London course resulted in a waning of interest, with just four or five boats starting in 2000, and none completing the course!

Some serious head-scratching was required, and with the more friendly political situation with Mozambique, the race reverted to Maputo (the old Lourenco Marques) to Durban, and 14 races completed.

Again interest waned and again the course was changed, with four races between Durban and Port Elizabeth.

‘That course fell foul of some competitors who thought it too long and too dangerous, so for this year the race was again going back to a Maputo start. COVID-19 scuppered those plans, so it was again back to the drawing board, with East London cracking the nod this year.

I suppose it’s a fitting gesture to go back to East London this year as it will be the 25th race to that port.

That in a nutshell is a brief history of the Vasco da Gama Race.

My love affair with the race began in 1977 when I raced the very first race to East London aboard a Miura named ‘Outre Mer’ with Brian Tocknell as skipper. Just four boats competed that year – ‘Outre Mer’; ‘Sea Jade’; ‘Passatt’ and ‘Ambre’. The skippers were Brian Tocknell; Dick Jones; Siggi Eicholz and Steve Hoare respectively.

The 265nm course seemed to take forever, especially as we were clubbed by a typically ugly and ferocious South Wester. But soldier on we all did, with all four boats finishing – and the members of the East London Yacht Club putting on a massive party that seemed to never end.

The seeds were sown, the chatter exceptionally positive when the boats returned home, and from there on the race grew year-on-year with a fleet size of over 40 boats proving its stature.

I thoroughly enjoyed the race and did not miss one until the 2000 race when the boat I was due to sail on was sold suddenly, and the new owner did not want it raced to East London, despite the fact it had to pass the port on passage to its new berth!

So 23 of 24 races to East London is something I will always remember as each one was unique, each one had challenges, and each one created great memories and friendships.

I did one race from Maputo to Durban with Nicholas Mace aboard ‘Gumption’, and had the fact that this year was the 50th race been known earlier, I would have made a plan to get a berth and complete my 25th Vasco. It’s not to be and I am at peace with that. 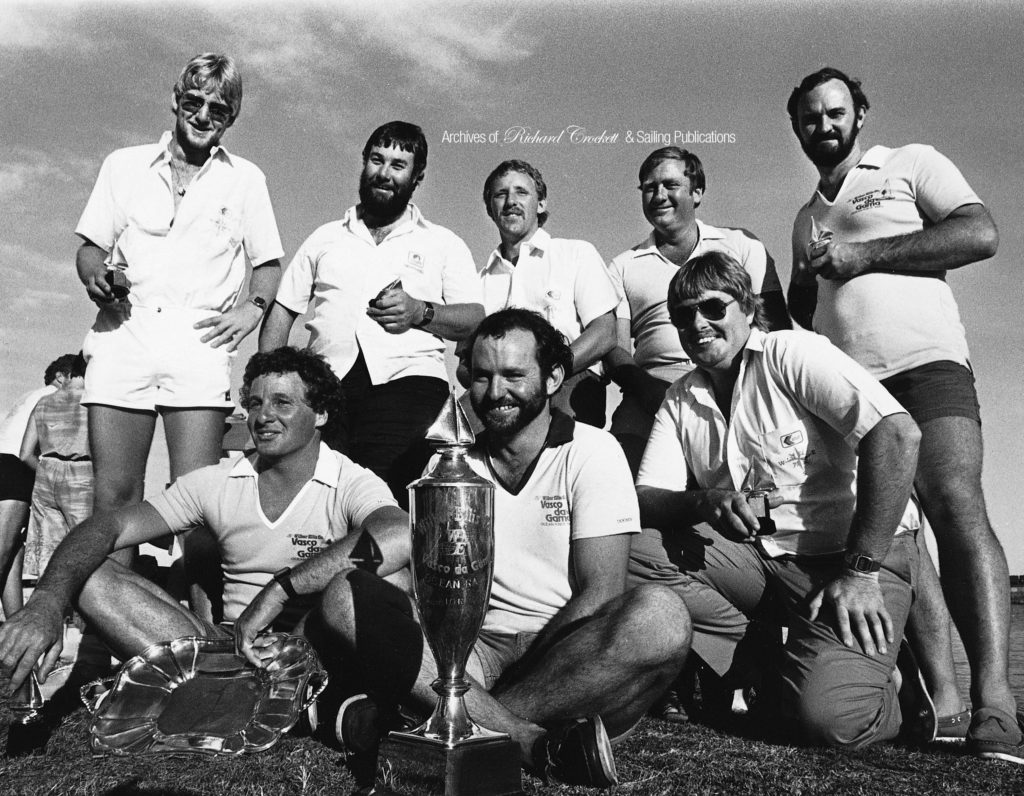 Obviously that first race was one for the memory bank, as was winning in 1980 with Dave Cox aboard Magic Carpet, and taking both line and handicap honours in 1983 with Terry Clarence aboard ‘Assegai’. That ‘83 race was tough as we started in a building south wester, with the skipper ordering everyone onto the weather rail and announcing that just one person per hour could go down below and sleep, the rest staying on the rail. It was tough, but we chewed up the miles in the current, nearly overshot East London as a result of not being able to sail out of the current quick enough in the dying wind, and then ghosted to the finish line from sunrise until 10h00 on glassy seas and no wind. The next boat finished some 8 hours later – giving us “the double”.

1984 was the year of the big blow, yacht losses and mass damage – yet despite there being no finishers, it was one hell of an experience during the height of that storm! With coms not good in those days we were not aware of the devastation across the fleet until we were close to Durban and picked up Radio Port Natal where all was revealed. The party that night was momentous – and days long in duration!

And there were many more seriously memorable races, with the 1999 race aboard ‘Solar Wind’ being one because we hooked into a very strong land breeze close inshore on the first night and fetched parallel to the coast at great speed almost all the way to the finish, again taking “the double”.

Whatever the course, and irrespective of how many boats compete, this race is legendary and valuable to sailing in South Africa. It has produced many a fine sailor, while also chasing a few away from ocean racing. That’s the nature of the beast! 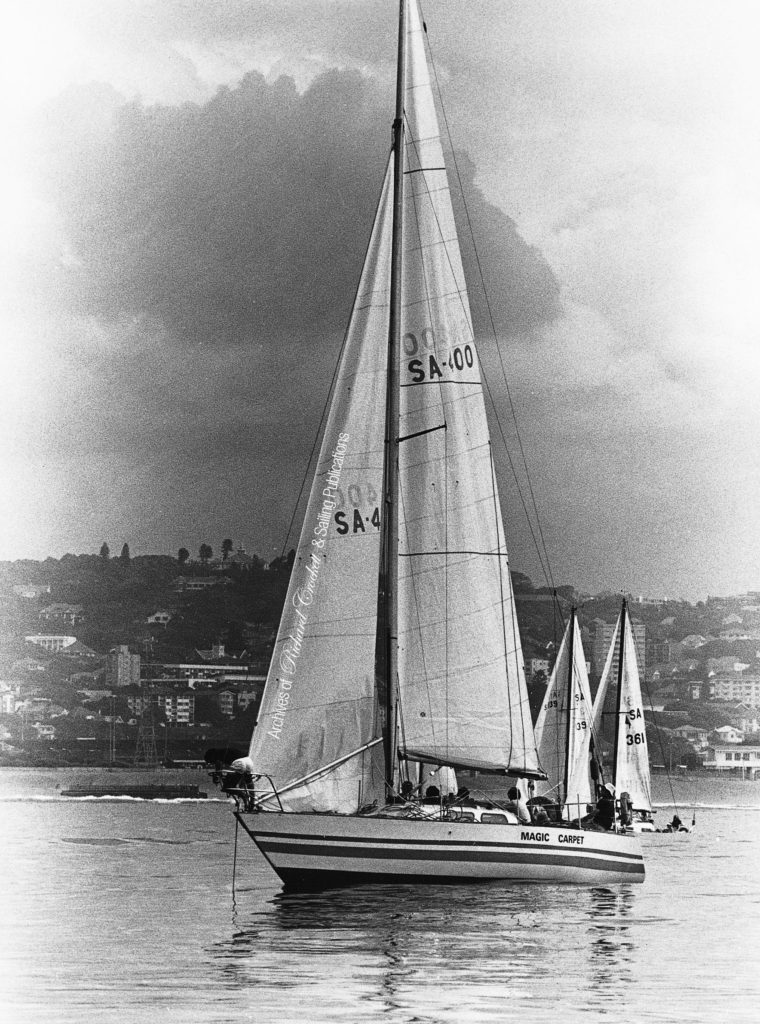 There was a very strong current opposing the fleet at this Vasco da Gama Race start, so Dave Cox, skipper of ‘Magic Carpet’ ordered the anchor to be put down and kedged on the start line until the wind was strong enough to sail. Many of the fleet drifted way past the Umgeni River.