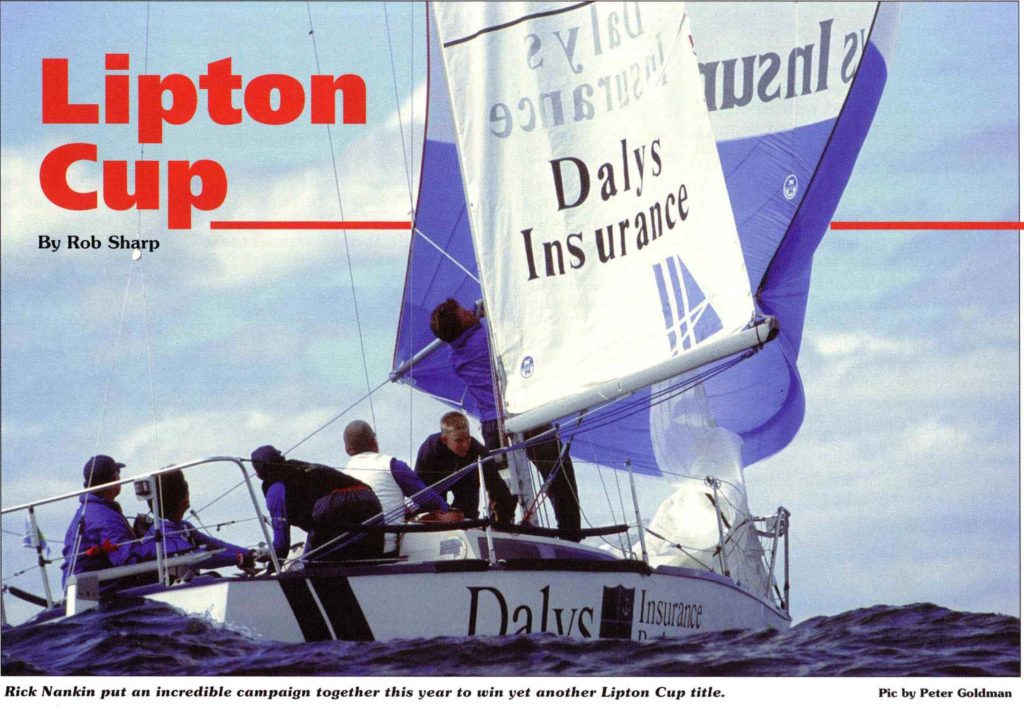 At the height of the really competitive Lipton Challenge Cup events when competition was at its very, very best, Rob Sharp wrote one of the best ever Lipton reports.

It’s worth reading every single word as not only is it entertaining, but it’s full of good advice too.

Sailing with Rick Nankin for Theewaters, he describes the crew and their positions as follows:

“James is one of South Africa’s top young (12) Oppie sailors and Rick brought him along to introduce him to this extremely competitive class of sailing and to contribute to our somewhat lightweight crew (also to bring the average age down somewhat). Both Spillers and Parky have incredible strength to weight ratio but when it comes to weight on the rail, they are a bit pathetic. Hence, Dave and myself fast became the hanging heavies that provided Nanks with more “lift” than he cared for!”

Describing the competition, he said: ‘Olympian Ian Ainslie and his development crew (I am still struggling with this word – these guys are good, very good in fact, and indeed a force to be reckoned with. Lets forget “development” and substitute “Developed”), pipped Pete Shaw into third with Mark Sadler opening his account with a fourth. Dave ”I’ll go anywhere in my shorts” Hudson showed his experience and guile against the hugely talented and younger rivals, Greg Barker (with Dave’s son, Roger onboard) to outwit them into sixth place.

After winning the opening race, Nankin gave his crew this advice: “focus day by day, take each race as it comes – keep the big picture in mind.”

Dave Hudson, with an uncharacteristic 13th in the second race said: “Really nice people you meet down there.”

“Our last, fairly low pressure start was crippling, and I gloomily counted 11 boats ahead of us at the top mark. “Chip and charge” – another of Nank’s quips – saw us reel in three boats on the first reach and run” reported Sharp.

In summing up their victory, Sharp said: “Easy hey? Not so, by no means. This is a hard regatta, the competition is fierce, the boats are small and uncomfortable for some, and the weather this time was cruel if not brutal. Rick put together an amazing campaign whilst going through an incredibly tough time personally. Stay focussed and prepare well, time on the water is immeasurable.

“We have an enormous amount of talent in this country and it is encouraging to see youngsters like Sadler, Barker, Mcloughlin and Lagesse placing high up on the leaderboard.

“For us it was a great event. It was our turn, not by luck, but with hard work, determination and some great sailing by the team. Forget Cool Hand Luke, Rick was masterful.

“Seldom do you see a man so focussed, dedicated and calm, knowing what to do, when to do it and why. The guy is a legend, race with him one day; it will enrich your sailing life. Oh, and never forget, “always look on the bright side of life … ”

This is a must read report.