“Talking Sailing” From My Archives. 20 Dinghy Pics From Around the Country

SA Games in 1964 – Saldanha Bay.
The caption in SA Yachting read as follows: Lunchtime quiet at The Hole, Saldanha Bay, scene of this year’s S.A.Y.R.A. National Regatta and “Games”. Looking down on the anchorage
on the left was the Naval Gymnasium, where hundreds found hospitality, and below it the President’s Jetty where the deep-sea craft had their headquarters. On the right was the dinghy H.Q . and the fine slipway, financed by the Western Province Sailing Association and a permanent amenity for yachtsmen. Beyond stretches the beginning of the wide waters of the Bay proper. The F.D., Sharpie and Spearhead course was out of the picture on the right.
Inset is one of the “Olympic trials” medals awarded this year to leaders in gold, silver and bronze.

Continuing the theme from yesterday there are 20 new dinghy pics today from Clubs, regattas and opening cruises around the country.

What I have found very interesting in browsing my archives over the past year or more, is how many Commodores of Clubs don a cap for their opening cruise and then proceed to salute the fleet as they sail past. I have always believe that the “authority” to salute was reserved for Military Officers? Maybe someone knows the correct procedure and could share it with us?

The pic that piqued my interest most in this series is the one of the SA Games in Saldanha Bay in 1964. It certainly looked as if dinghy sailors had great facilities there at the time, and that Saldanha Bay was a wonderful venue for dinghy sailing.Please SHARE, RESPOND and let us have your thoughts and COMMENTS. 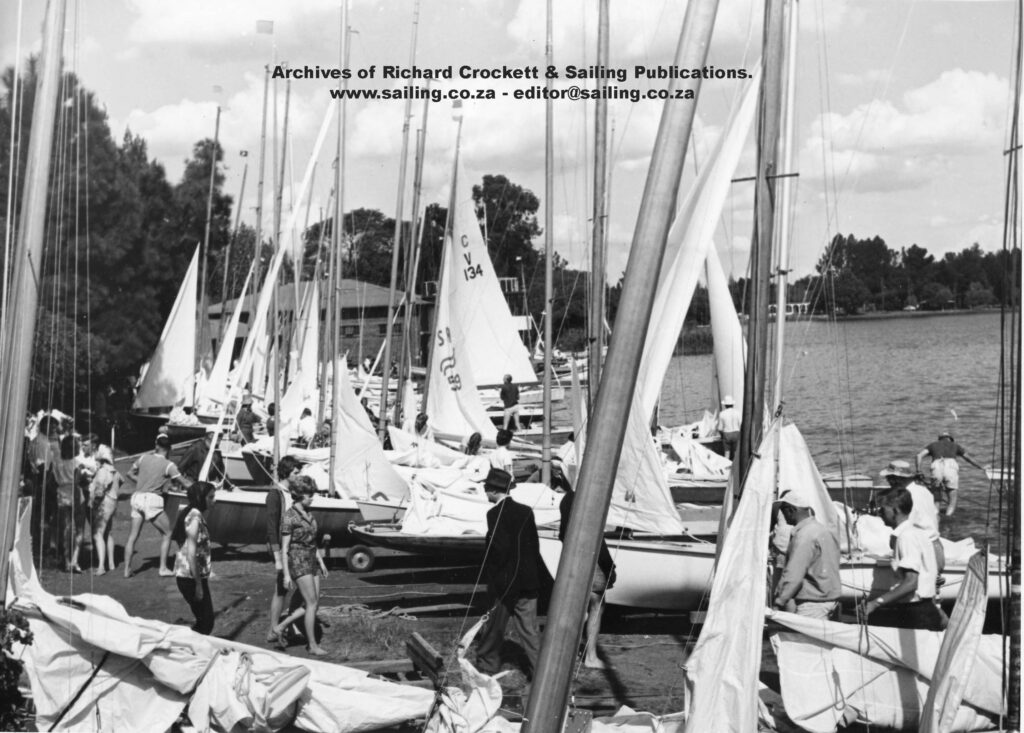 VLC at Germiston on Transvaal Cup day. Can anyone put a date to this, or have info on the Transvaal Cup day?
VLC has only a very short foreshore of the lake. On regatta days or weekends yachtsmen are confronted with the problem of trying to keep out of each others way. 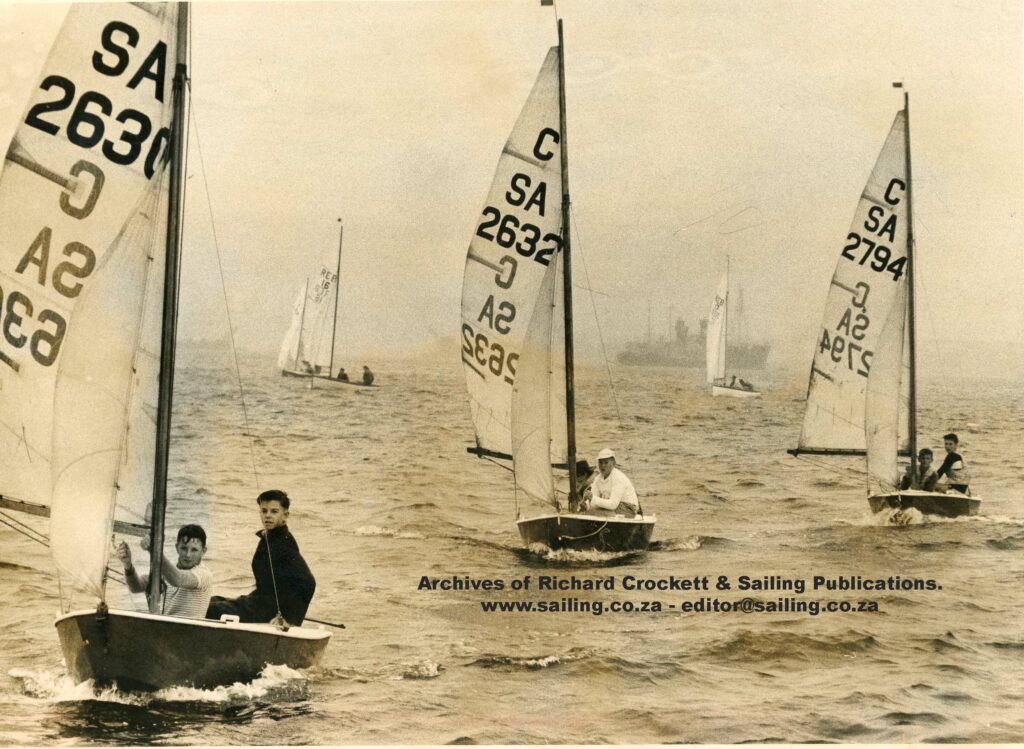 Cadets racing on Durban Bay – 27 October 1961. Can anyone identify these young sailors? 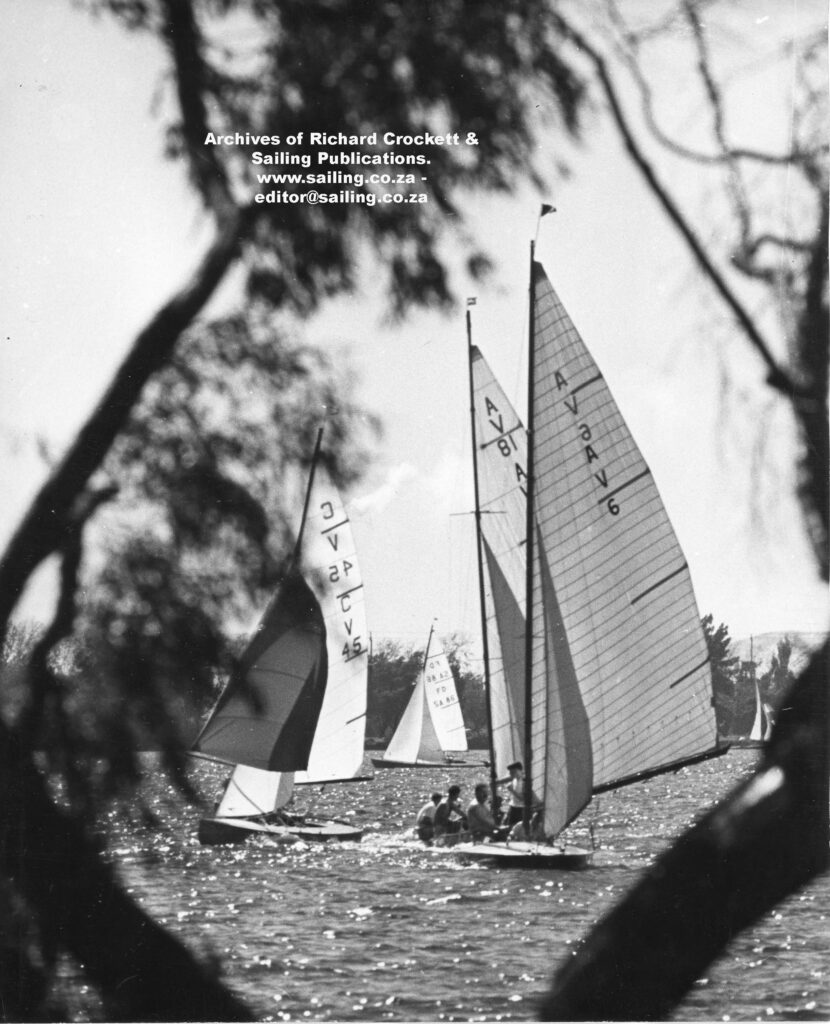 Yachts at East Rand. Can anyone identify the type of yacht? 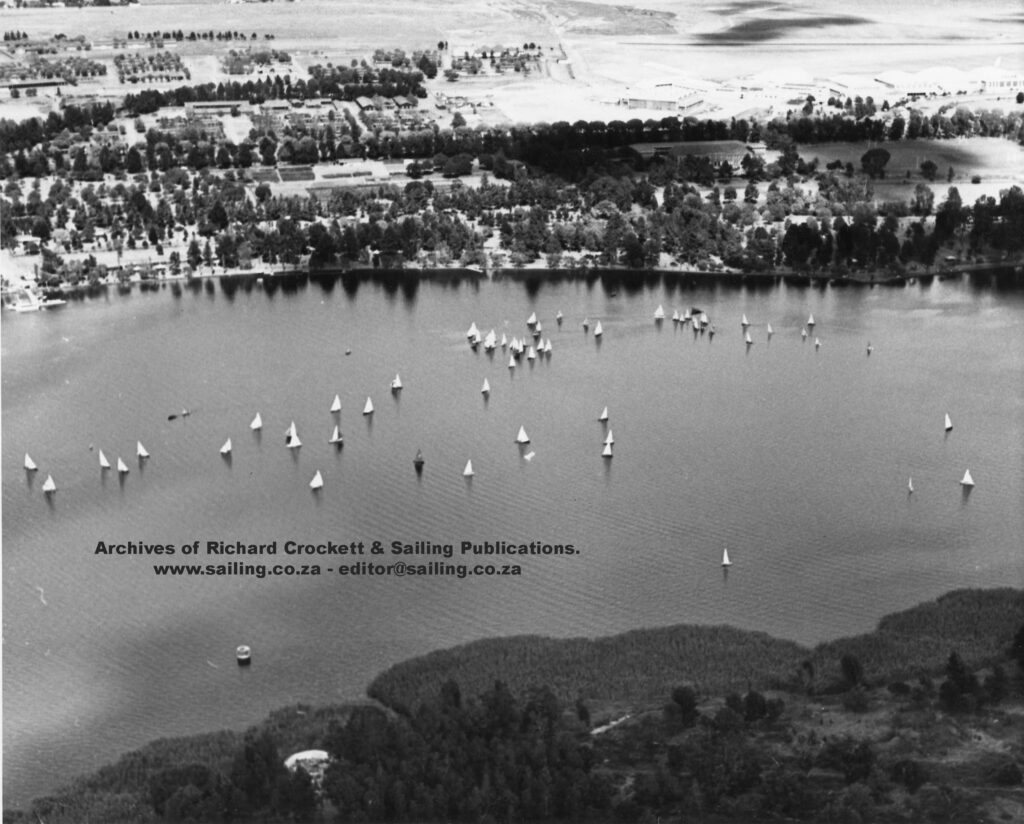 Another ariel view of the VLC Easter Regatta. 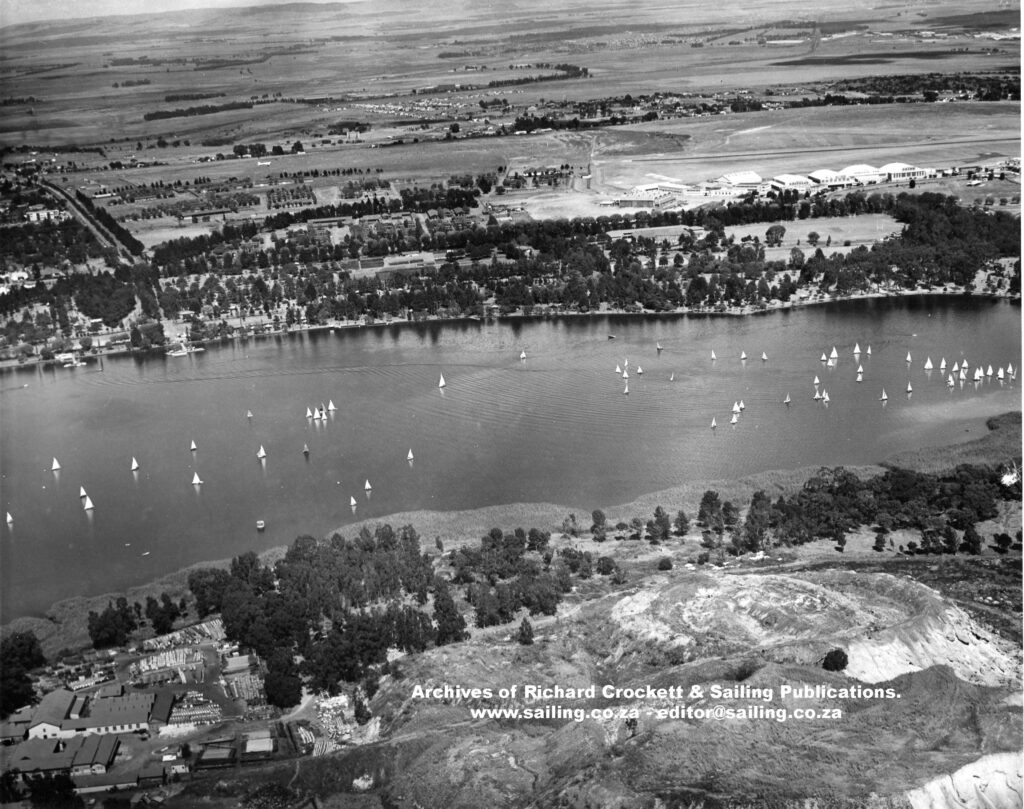 This is an ariel view of VLC during an Easter Regatta in which 153 boats competed. 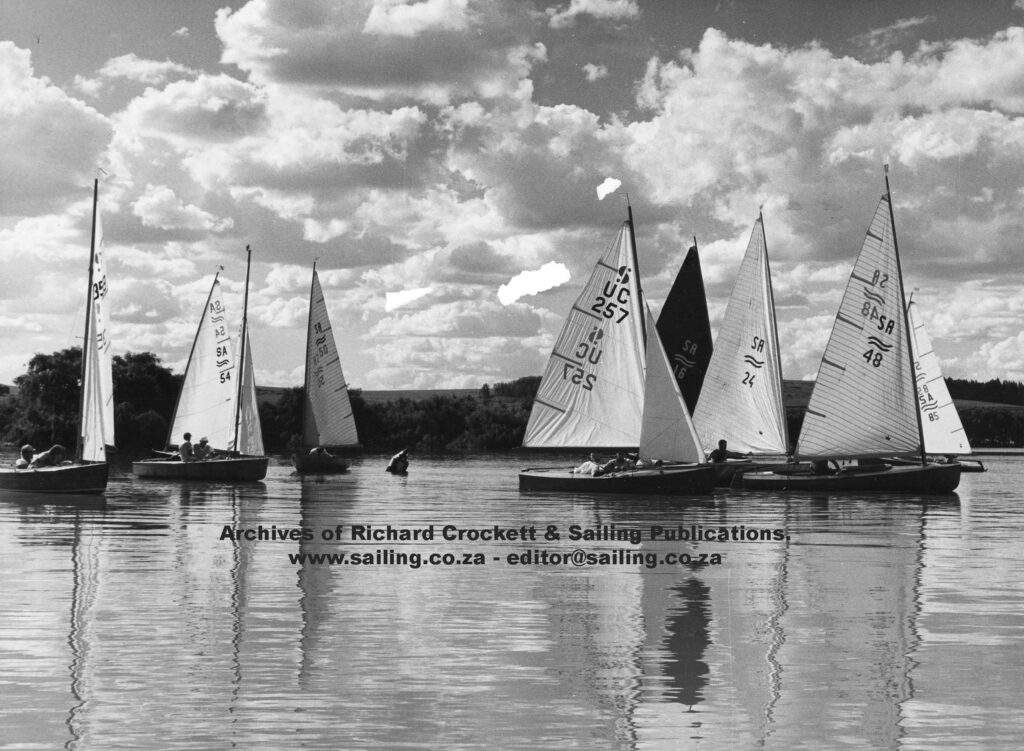 Loch Athlone, Bethlehem. Sprogs and Finns ghosting along under a highveld sky. 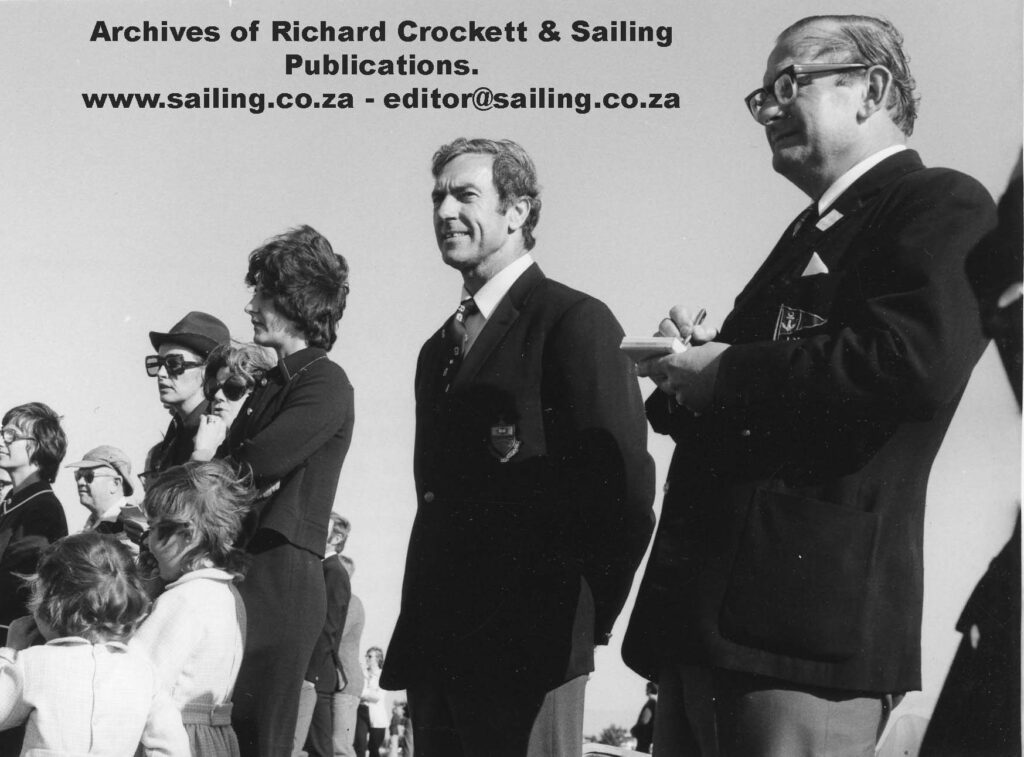 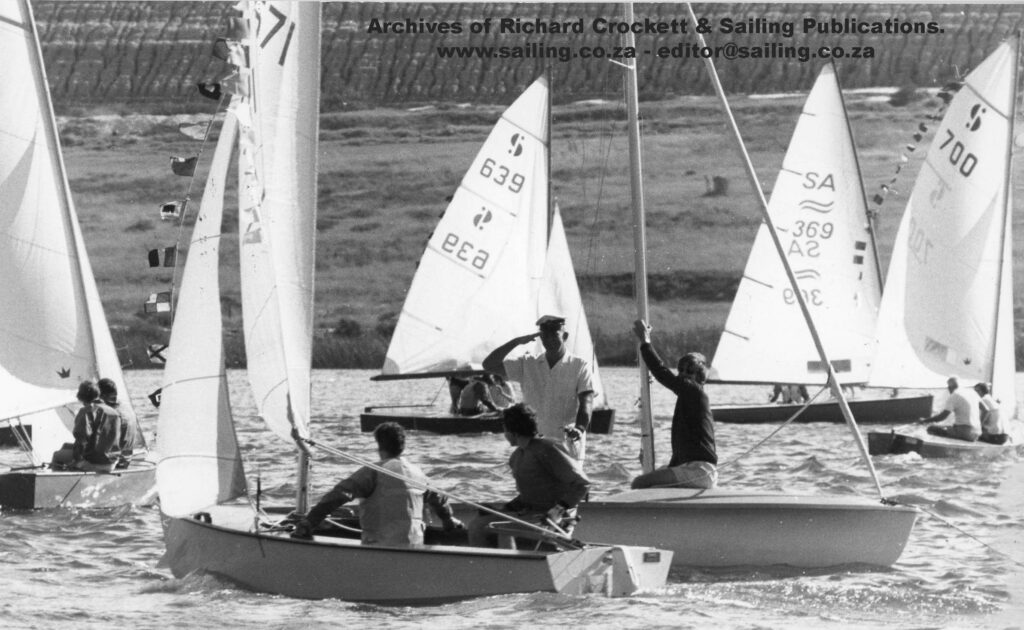 Opening Cruise. But where?

Opening Cruise – but where?

An opening cruise at one of the Clubs in Gauteng?

An Opening Cruise perhaps? But where? 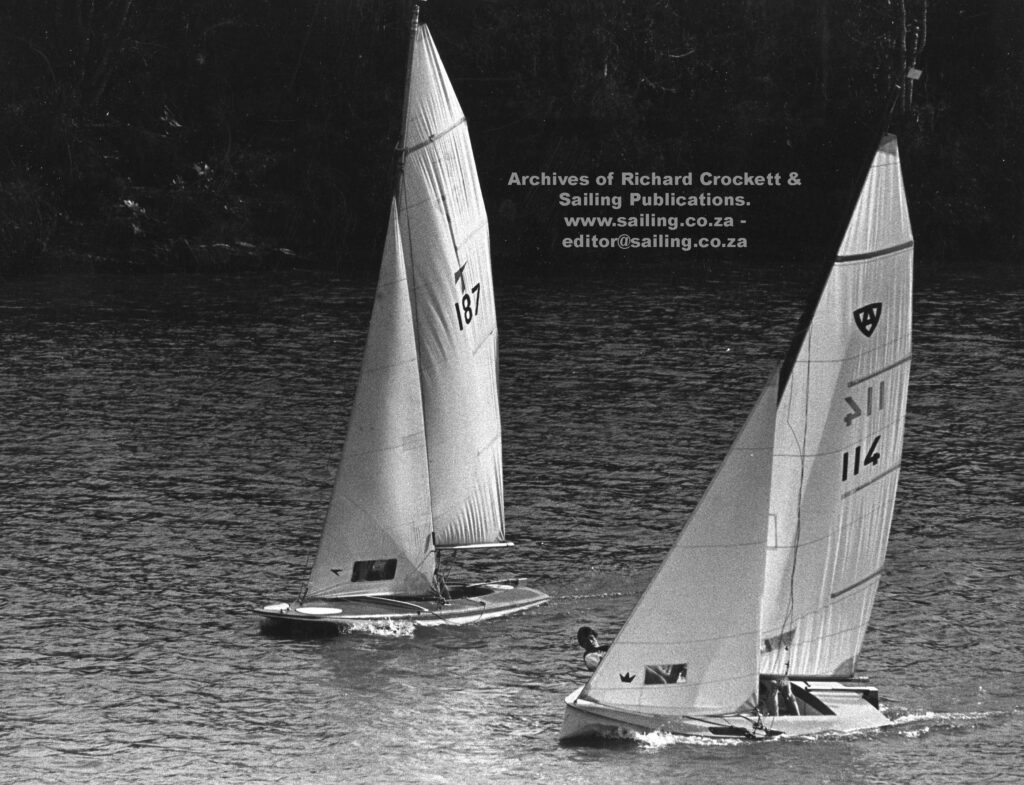 The Tempo (187) named ‘Torpedo’ was sailed by R Bell & J Southey as crew.
The Andy (114) was sailed by R Glenday & P Evans as crew. This was taken in the Grahamstown area. 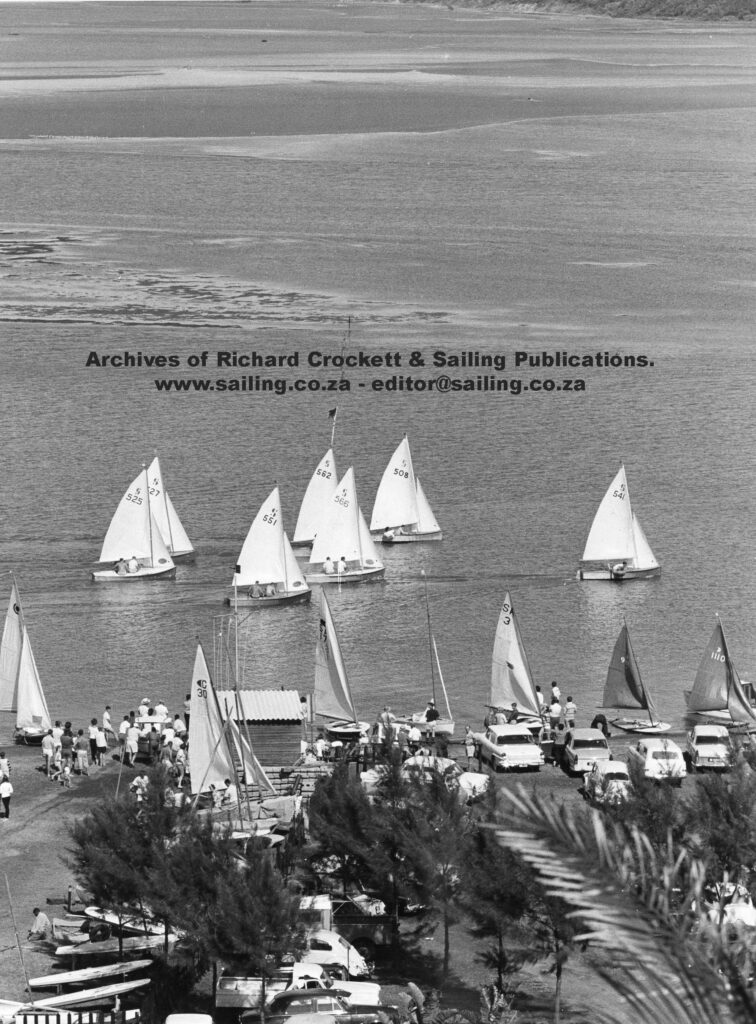 The caption says a Zululand Regatta! 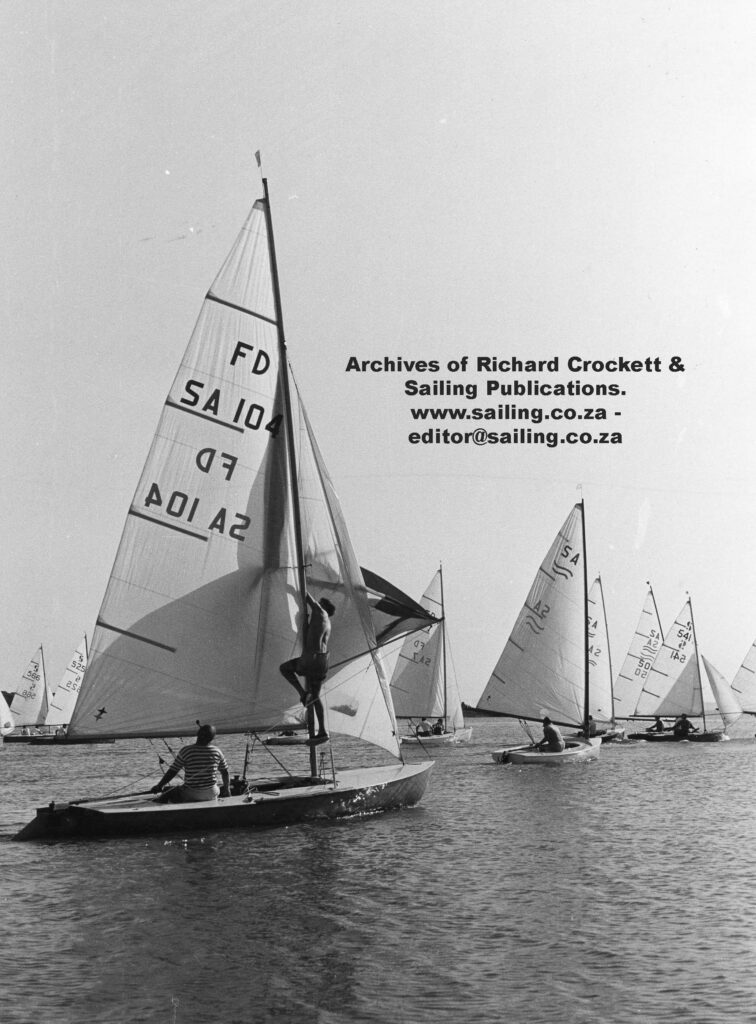 A Zululand Regatta is all the caption says! 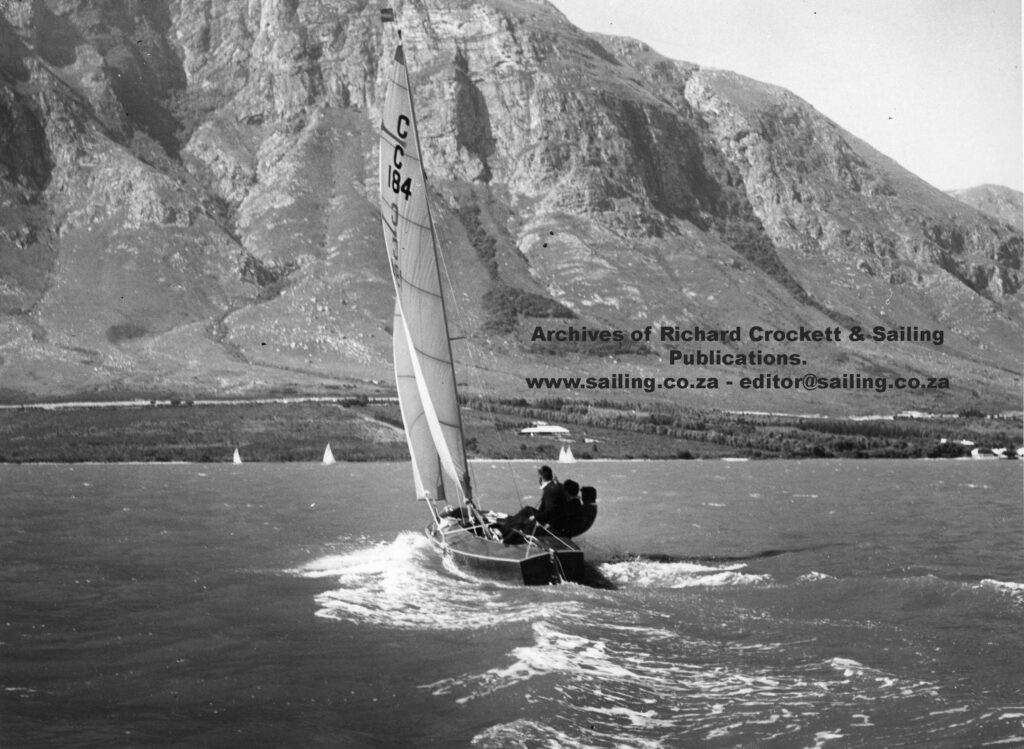 A Sharpie strutting it stuff on what look like Hermanus Waters? 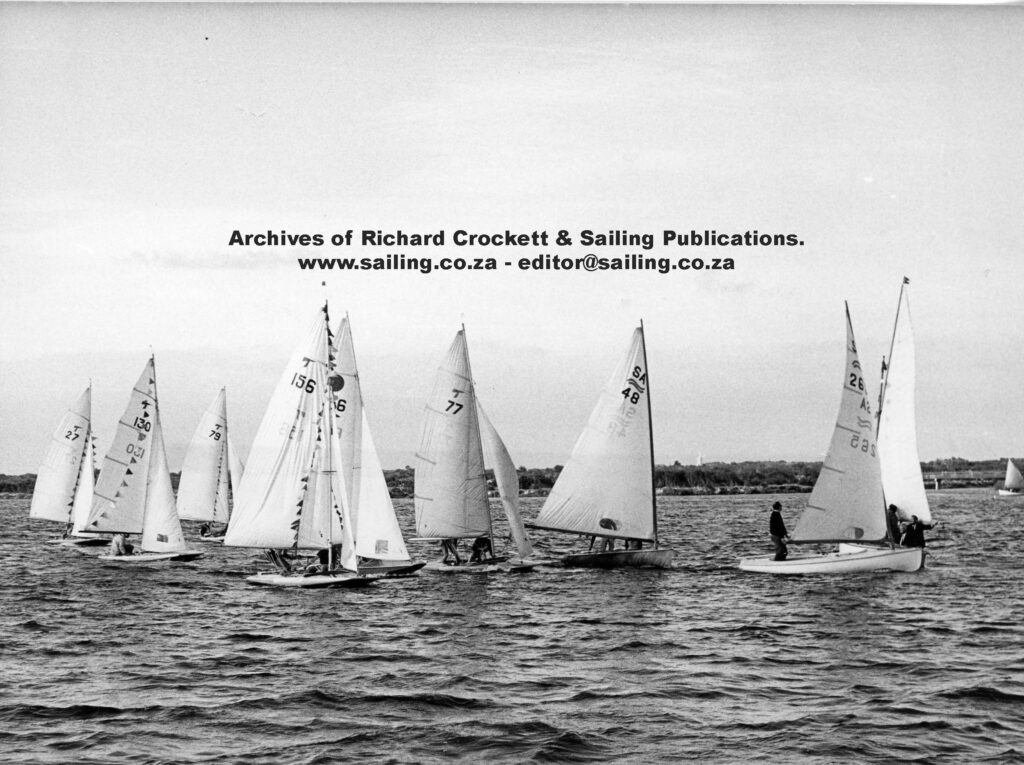 Imperial Yacht Club opening cruise – taking the salute. Henry Shagam leads a bunch of Finns and Tempos past the flagship. 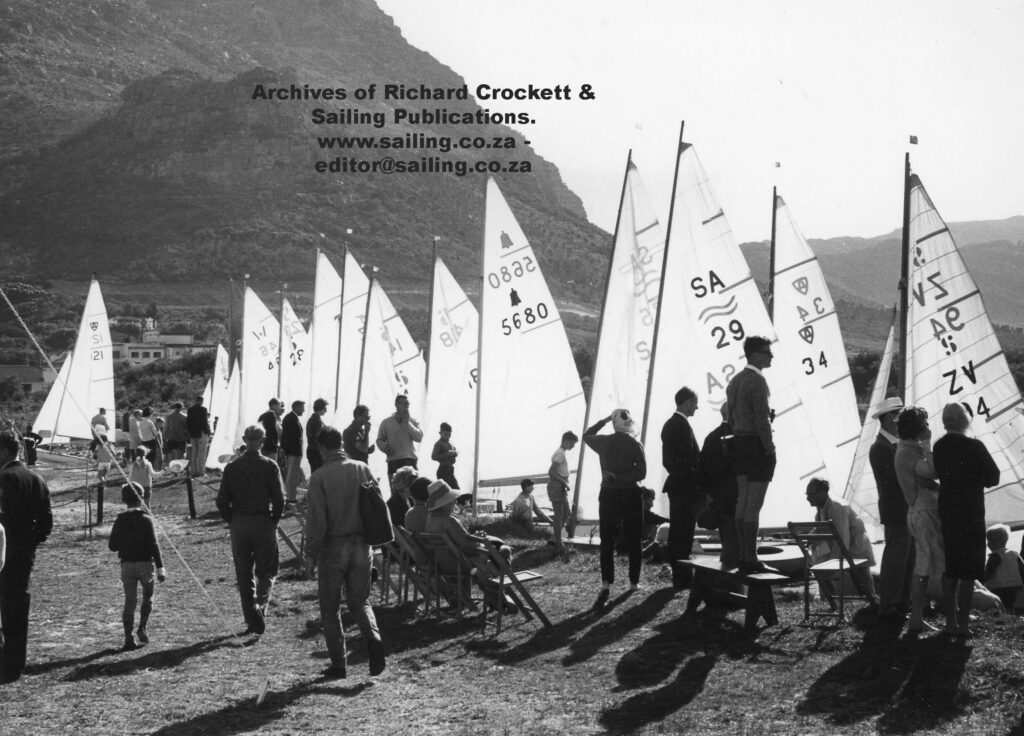 Imperial Yacht Club Opening Cruise. The fast growing IYC rallied a fleet of over 40 boats for their opening cruise. The salute was taken by Basil Lindhorst. 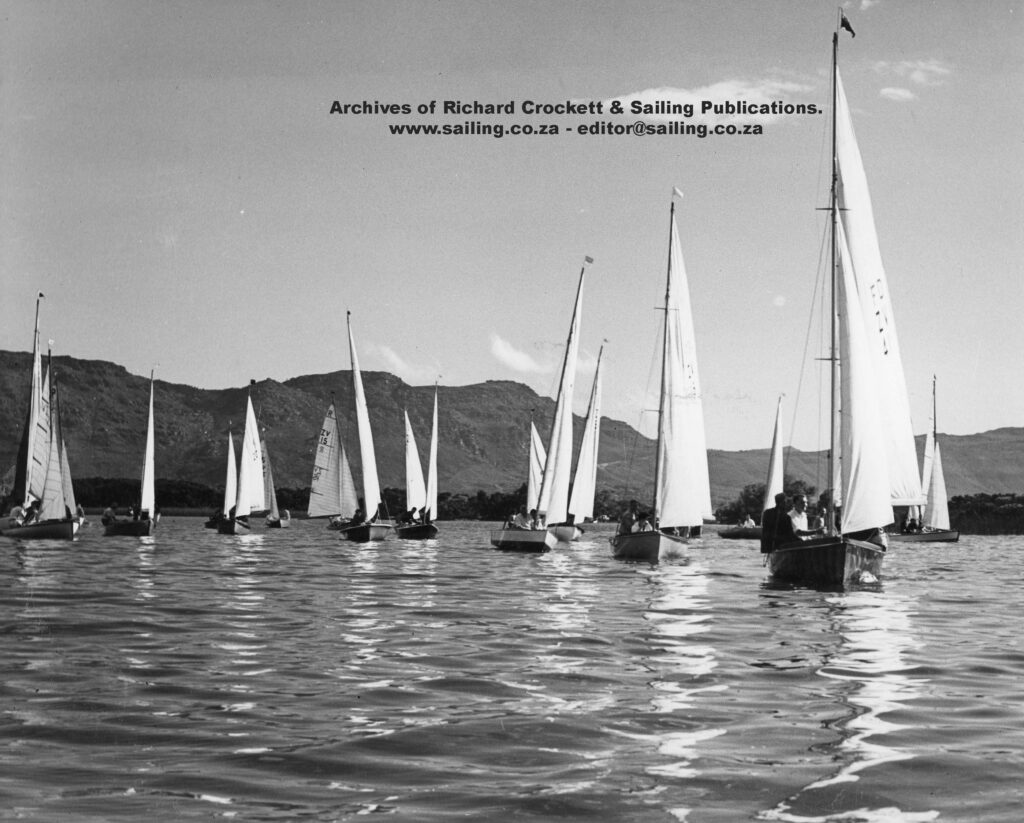 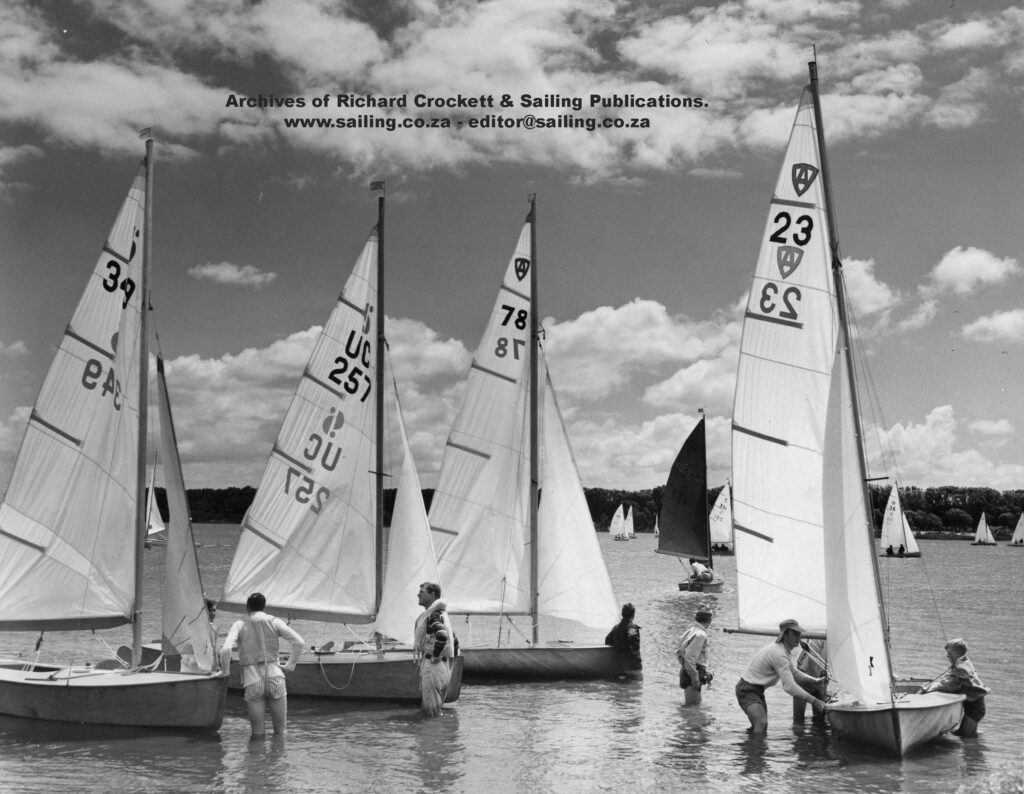