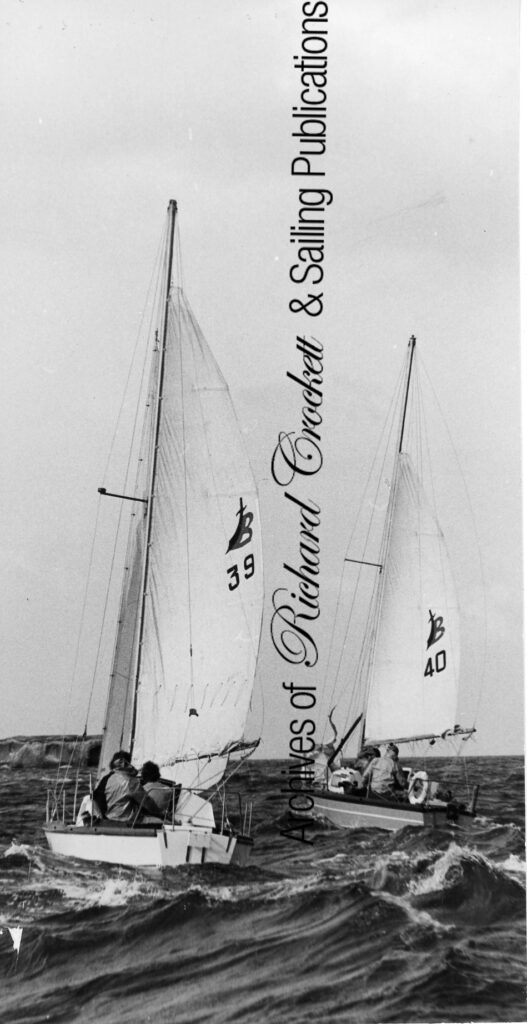 In searching the archives there are many interesting tidbits of info on the Class, like the Class President throwing his toys when the scribe mentioned in a report that the class was not happy with SAYRA and would rather be administered by CASA! What is certain is that politics played a key role in the sport way back in the ‘60s.

I did discover a report on the very first W.P.S.A. champs for R.C.O.D.s and Buccaneers. Sadly no pics, other than a few in my archives which will have to suffice right now.

May 4 was a fine day, but there was so little wind at first that two yacht arrived late for the start. To make matters worse, a large yacht, awaiting the start of the following race, sailed through the fleet as the gun fired; thus leading to chaos on the starting line. A light north-wester was blowing, but many of the R.C.O.D. and Buccaneers were caught in a calm patch south-west of Bell buoy the first weather mark . ‘Freya’ emerged ahead of the class and maintained her good lead to the finish line. ‘Jumbo’, badly set back by the “hole in the wind”, persistently worked her way through the fleet to finish a good second, followed by ‘Cameo’ and ‘Buccaneer’. The late starters gamely carried on to·the finish of the shortened course.

On Sunday 11 all entrants started reasonably. but the race had to be abandoned as the Milnerton ‘buoy was missing.

In the second race ‘Droug’ and ‘Freya’ started well with the former leading round the first mark. With but a small Dutchman spinnaker, ‘Droug’ was soon overtaken and ‘Freya’ led her and ‘Jumbo’ around Woodstock buoy. At the finish the leaders were ‘Freya’, ‘Jumbo’, ‘Droug’ and ‘Buccaneer’.

The final race started similarly, but ‘Cameo’ and ‘Buccaneer’ went inshore on the first leg and gained the lead by taking advantage of comparatively calm water and good wind near the harbour wall. This order was maintained in the run down to Woodstock, but ‘Freya’ and ‘Jumbo’ emerged in the lead after the beat up to Bell. On the two spinnaker reaches from Bell to Milnerton and from thence to Woodstock ‘Freya’ maintained a good lead while ‘Jumbo’, ‘Buccaneer’ and ‘Cameo’ battled for second position in true buccaneer style; ‘Jumbo’ emerged the victor. The race now developed to an exciting stage for ‘Freya’ bore off to sea looking for wind. She found a nasty chop and was headed. Meanwhile, to coin a phrase, the remainder of the fleet were “lifted along the harbour wall”. ‘Freya’ lost her half mile lead and ‘Jumbo’ rounded the weather mark a hundred yards in the lead. As ‘Freya’ bore down she was baulked and luffed much to the amusement of the spectators. Almost at the last she shot through ‘Jumbo’s’ guard to an exciting third win! In the last race ‘Jumbo’ was followed by ‘Buccaneer’ and ‘Cameo’.

We all want to improve our yachts. Bill Donnelly has shown that roller reefing must be allowed. Many of us support him very strongly as it is cheap, efficient and recommended in the strongest terms by leading yachtsmen throughout the world. If no objection are sent to the Hon. Secretary / Treasurer, within a month of publication, we shall consider that members are unanimous in approving this very sensible development.

Some of us want larger genoas for light winds. What about trying this out in non-class races as an experiment. Come on you chaps!

Congratulations to Bill Donnelly up on the Vaal Dam for his various victories and thanks for giving the Association a well-merited boost – van de Stadt’s Buccaneer is a truly delightful yacht and is inexpensive and easy and quick to build.

Isn’t the use of English in this report quaint?