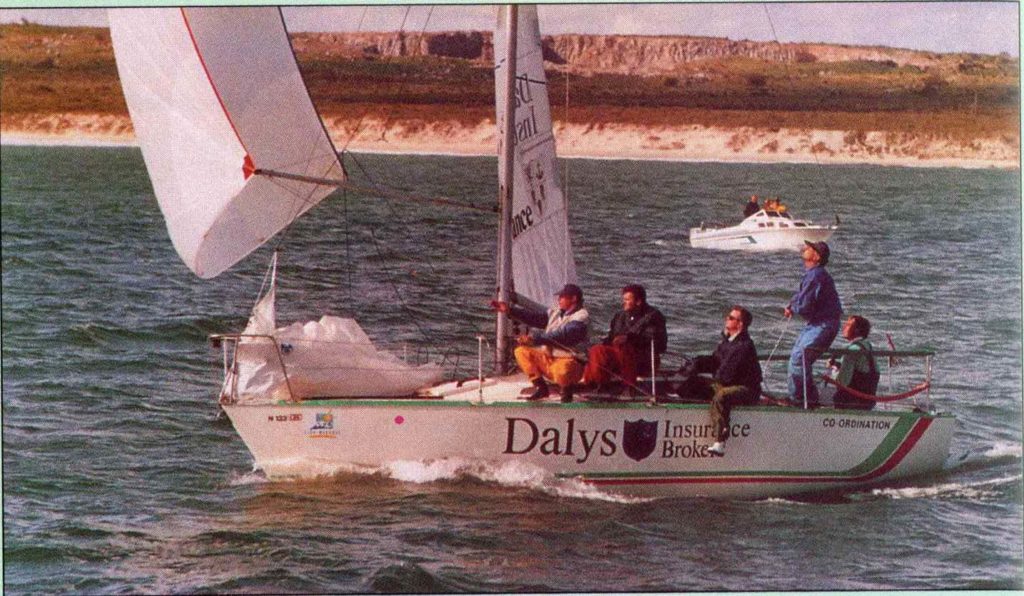 The winning boat, and a sixth win for Zeekoe Vlei.

Saldanha Bay was again the venue for the 1994 Challenge, and what a great regatta the reports say it was, with Chris King and Zeekoe Vlei YC taking their second title on Saldanha Bay waters.

But what did specifically interest me was an “infringement penalty” permitted in terms of the rules of the day. This is what one report said:

“‘Dalys Insurance’ (King) led the fleet from the first mark in confusing southwesterly winds, only to be outsailed by ‘MBS Challenger’ (Davis). The latter had to give up first place and take a 20% penalty for colliding with Hout Bay Yacht Club’s ‘Maxtec Peripherals’ (Allan Lawrence) while trying to shoot the top mark.

“‘Sigma Coatings’ (Schultz/Mee k) was involved in a collision at the start of the race when they drifted onto Imperial Yacht Club ‘s ‘Team 3 Spears’ (Justin Foox) to leeward. Meek lodged two protests, one against ‘MBS Challenger’ for initially flying a protest flag after a collision and then changing it to an I-flag. The I-flag carries a 20% penalty and acknowledges an infringement of the rules, which is safer than being disqualified after a protest. Disqualification would mean sudden death since no discards are allowed in this regatta.”

In today’s terms, the penalty for an infringement of the above nature would be disqualification from that race – and maximum points!

There appeared to be tons of acrimony in the series with multiple protests and even whingeing about the bridge.

The Sailing Mag scribe picked up “something missing” in the early stages of the regatta, but could not quite put his finer on it until much later when he said this: “It was then I noticed what was missing. The big red marker buoys were plain and unadorned. In previous years they sported the Joko emblem, but the “tea bags” were no longer there. Now part of Unifoods, Joko had said they were withdrawing from the sponsorship, and had left the decals off this year. But finally on prize-giving night the company said the buzz of the event was too good to give up.

“Since it was the tea trade that led to “tea clippers” and fast sailing ships, it would be difficult to have The Cup without Lipton. Sir Thomas would turn in his grave!”

Sadly Unilever did eventually withdraw their sponsorship and association of the event.