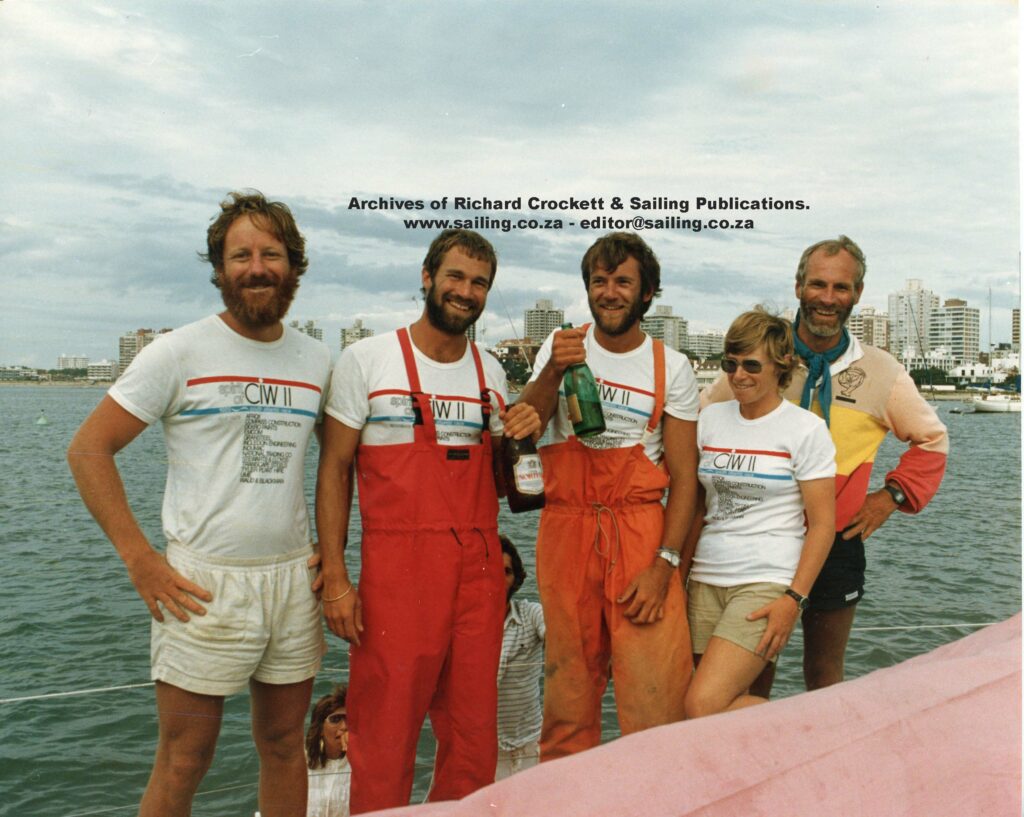 So having covered the start of the 1985 Uruguay Race, and especially the maxi challengers, it’s time to share the race reports from both SAILING and SA Yachting magazine.

There is no better way to describe the importance of Ernst van der Laan’s victory aboard ‘Spirit of CIW II’ in the 1985 Uruguay race than with this extract from John Fensham’s report:

“Ernst van der Laan is a canny, thinking sailor whose years “out in the cold” as the designer of the problematic ‘Mainstay’ (now ‘Momentum Life’) and Brian Cole’s unlucky ‘Lucky Tree’ earned him more detractors than admirers, and also obscured a racing career which has included some notable wins.

“His double vindication, both as handicap winner of the 1985 South Atlantic Race and as designer of the yacht which gave scratch boat ‘Apple Macintosh’ “a few good frights”, could not have been more dramatic! Not only did he out-sail, out-think and out-manoeuvre competition which had all the betting at the start line, but his ‘Momentum Life’ design provided the most exciting boat-for-boat duel of the race.”

“On the performance of ‘Momentum Life’, Van der Laan believes Gerhard Aab and his Witwatersrand University crew gained the maximum possible out of the yacht. ‘Apple Macintosh’ skipper, Padda Kuttel, himself admitted that given stronger conditions, Aab’s challenge could have been unbeatable – a possible confirmation of Lavranos’ belief that the yacht is under-canvassed.

“They have no reason to be ashamed,” Van der Laan said. “Aab and his crew sailed a very clever race. They covered ‘Apple’ every inch of the way and at times took substantial time out of her. The conditions just short of Punta, however, made all the difference. All your shortfalls come home to roost just short of the finish line!”

My apologies for the report being truncated at the end just as the text was beginning to get juicy! I have no idea what happened there, or where the rest of the report disappeared to!

There are three different reports to read today – all different and all interesting in their own right.