This was an interesting year as it appeared that sportsmanship played a huge roll throughout the whole series.

“After a break of two years it was very gratifying to see two Durban entries. As a result next Lipton Cup will be held offshore at Durban.”

Race 3 was sailed in a variable SSE, with the finishing positions as follows: ‘Yvette’, ‘Sunmaid’, ‘Tinromara’, ‘Sunrose’, ‘Tarpon’, ‘Trickson’, ‘Mariquita’.

“It was noted that ‘Trickson’ was flying a protest flag. ‘Trickson’s’ protest against the Race Committee, that the starting line was not in accordance with the sailing instructions, was upheld and it was decided to resail round 3 on Saturday.

“After race 5 The Durban skipper had intimated at this stage that they would not be able to stay for the resail and Ronnie Chedburn withdrew for business reason.”

The resailed race went ahead anyway without those two boats.

“After a postponement the re-sailed race was started in a light westerly, but soon afterward the south-easter came through making it a reaching course once again. However the race had been started in accordance with the sailing instructions and was won by ‘Tarpon’ from ‘Sunmaid’, ‘Trickson’ and ‘Mariquita’. 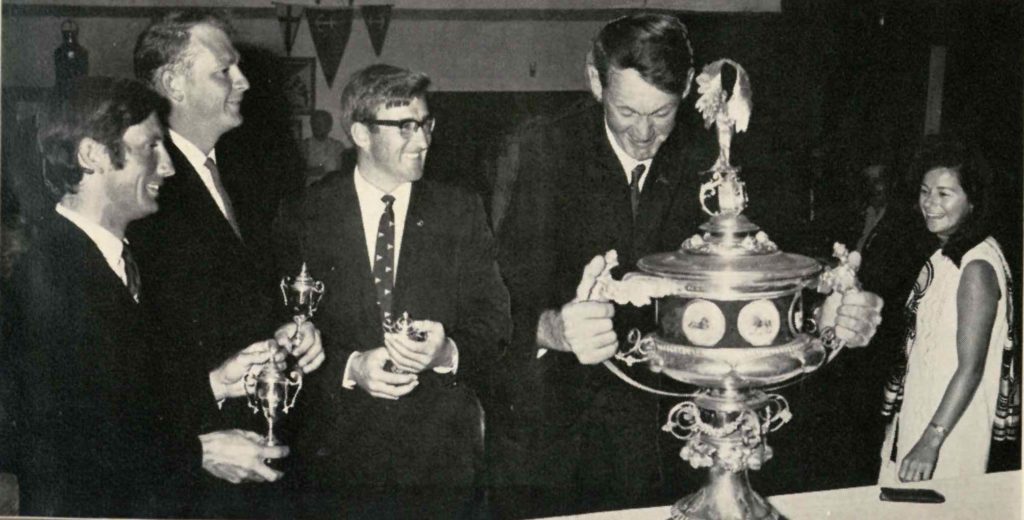 Here is the winning crew with the spoils of war – from left to right: Pat Fraser and David Joyce, who sailed in Voortrekker last year, Mick Whitehead and skipper Bobby Bongers with Mrs. Monty Silverman who did the honours at the prizegiving.