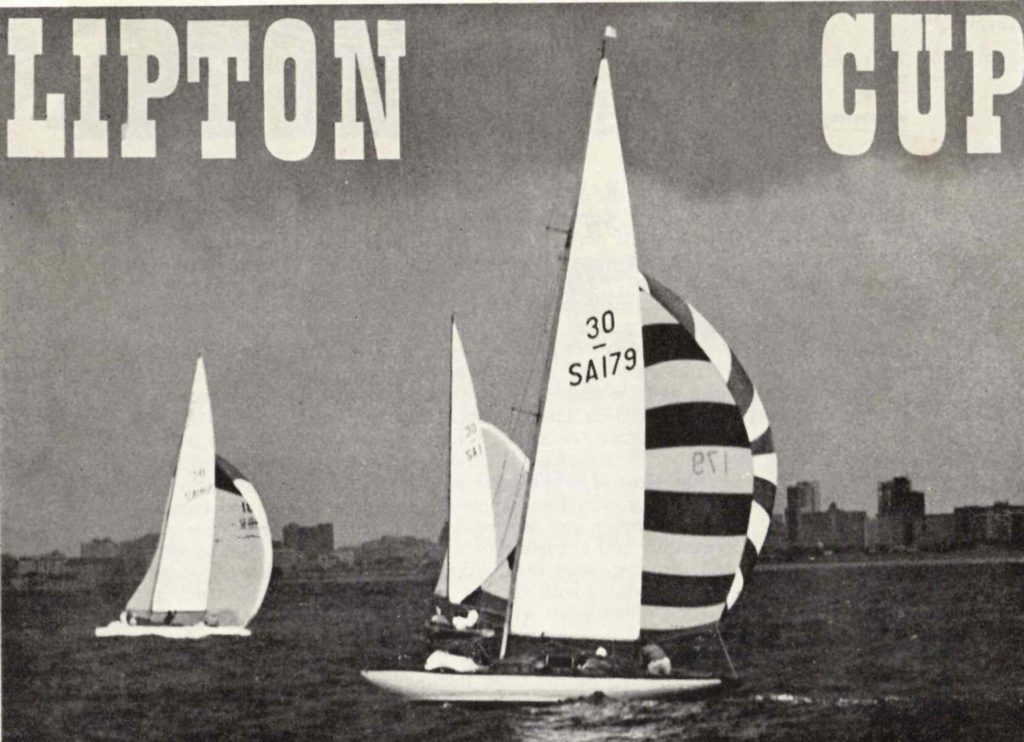 The winner, Rapid, keeps a very full spinnaker drawing nicely on the reach.

This is how John Tungay, reporting on this event, enthused about the 1963 Lipton Challenge Cup series:

“The 1963 Lipton cup racing for the Blue Riband of South Africa’s deep-sea yachting waters will be written down in the records as one of the most exciting 30 square metre series ever held. With two of the five races over, who would have thought that Noel Horsfield’s ‘Rapid’, which was lying nearly last on points, was going to win all three remaining races to wrestle the giant silver cup from the defender ‘Mariquita’ (W. Hancock) only by a technical decision of the race committee?

“The two yachts tied for first place on points aggregate, but ‘Rapid’ had scored more wins.

“A record entry of 12 craft was received”. 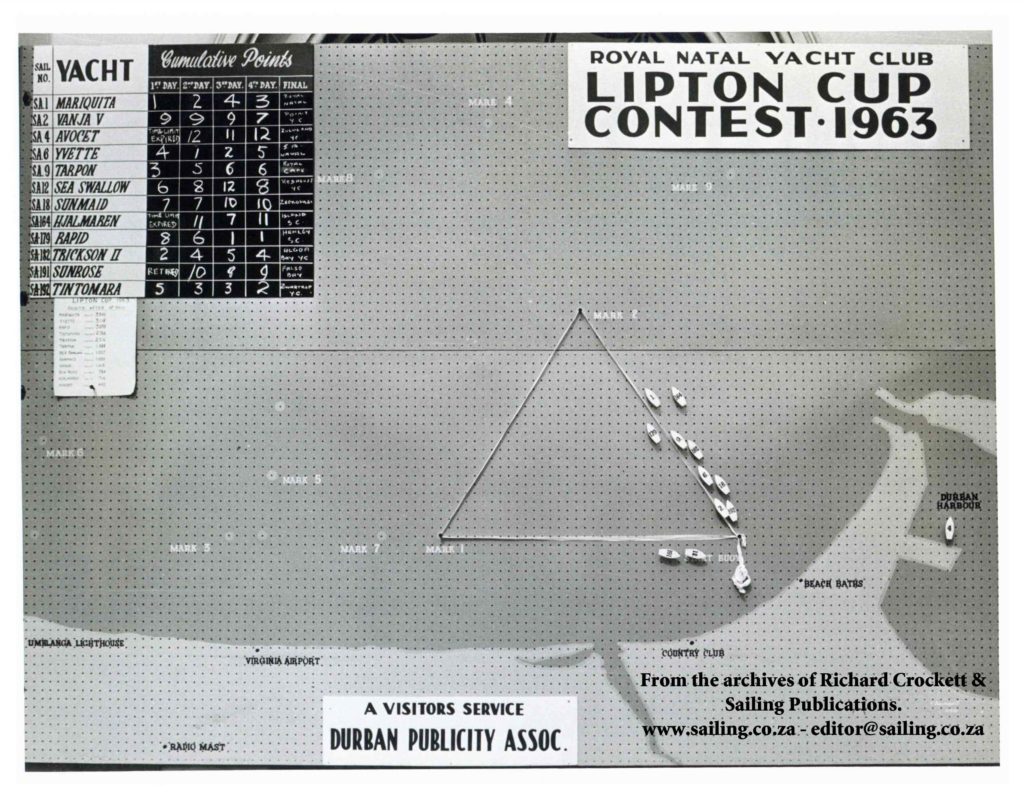 “Such was the interest created by the Lipton Cup series that the Durban Publicity Association erected a large board at the North Beach to enable people to follow the progress of the yachts. Transistorised two-way radios of the walkie-talkie type was used to give operator Walter Marriott, Bob Nuttall and Arthur Jones the latest information from out at sea.

“These three yacht men also gave invaluable help to the Press in providing up-to-the-minute reports for the afternoon newspaper.

“Whatever course was decided on for the day was to be marked up on the board at the North Beach using white tape and numbered silhouettes of the 30 quare metre craft were used for shifting along the peg-board as their positions changed.

The final beat of the final raced closed as follows:

“Then followed a breathtaking duel with ‘Mariquita’ first trying to cover ‘Rapid’, then a reversal in fortune occurred and, sailing through ‘Mariquita’s’ weather, Horsfield’s 30-square forged ahead to cross the line 63 seconds in front.

“No clear decision could be given who had won the race till the Lipton sailing committee met later that afternoon, as both boats had tied on points. However, according to the S.A.Y.R.A. rules, under which the Lipton Cup series was run, when there is a tie between two yachts the boat with the most wins takes the trophy.

“‘Rapid’ had won three and ‘Mariquita’ one, so it was Noel Horsfield and his crew who took the cup and it is the first time that the Henley Sailing Club, Maritzburg, for which he sailed, has won the trophy.”

What did interest me most, and something I was not aware of until reading this report, is the following:

“The deed of trust states that the Lipton Cup may not be competed for in the same water more than twice in succession, so from the start there was more than a little speculation as to which club would be host next year.”

I wonder why this was changed?