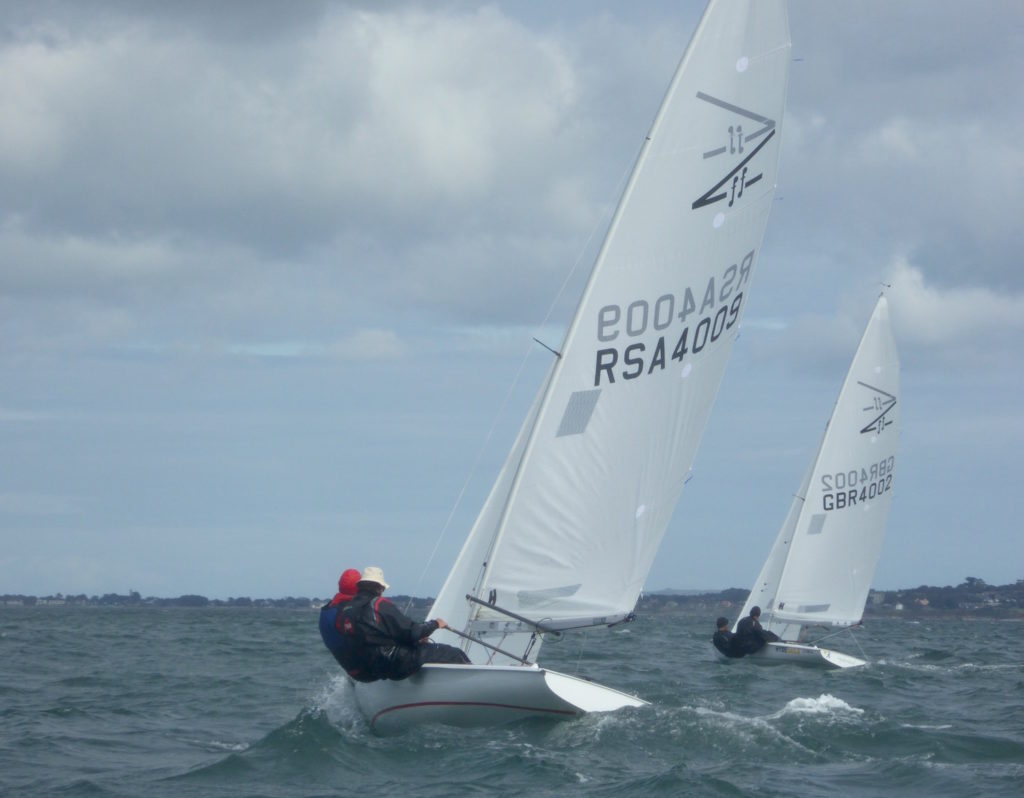 Let’s refer to them as “the old bullets’ as they are far from being “old f…ts”! Campbell Alexander and Dave Herridge are having a great time in the worlds, with Alexander being particularly stoked about the sailing, while Herridge – a very silent type – simply gets on and does what has to be done at the front of the boat exceptionally well.

In the first race yesterday Alexander told me that “20 knots came through on the first start and we jumped out of the blocks and into top 6 round first mark and up to 4th in next beat, but slipped on reaches”.

In his own words “the second race was shocker – was working the right hand side and then wind shifted by 25-30 degrees to left and gusted up to 20 from 8-12knots and we lost at least 20-25 places.. grrrr”. That’s sailing for you – but an impressive 18th overall in a 72 boat fleet – especially for a pairing who are both edging ever closer to their 70s.

Jonny Fullerton reports on the racing:
As the Subaru Flying Fifteen World Championship reaches the half way stage Dun Laoghaire delivered another blustery day to complete two more races. Early in the morning the wind was howling, but by race 6 start time of 13h00 it had moderated to a puffy 14 – 18 knots with a pronounced chop caused by wind against tide.

Race 6 started on the first attempt with a new course configuration of windward/leeward, triangle and windward/leeward – then a short beat to the finish which offered the chance for the fleet to stretch their legs with some fast reaching.

McKee / Jones snatched the lead by a whisker at the gate with the Brit pack in close attendance broken up by the rather unusual but pleasant site of Campbell Alexander and crew Dave Herridge of South Africa.

Despite a number of shifts and a short chop the places remained similar upwind for the second time but then came the long fetch/reach to the wing mark. With a number of competitors choosing between hoisting or two sail reaching then hoisting, places got a bit mixed up. By the time the lead bunch got to the wing mark, the rounding and the following run was a big tussle between Andy Mckee, Hamish Mackay and Richard Lovering. Meanwhile loitering with intent on his own course was three time world champions Graham Vials and Chris Turner.

Campbell Alexander from South Africa on his 8th in Race 6: “We were up to 4th but we are still learning how to reach! We got a good start and pushed to the right but generally watched the good guys and took the shifts and watched our compass most of the time. We are good upwind, but slow down wind generally, but we can improve there. We were in with the guys and it was just great fun.”

The second race of the day (R8) was sailed under the same semi-overcast skies and slightly less breeze 14 – 17 knots with a swing to the North causing a quick re-jig of the course marks. On the third attempt under black flag the fleet of 72 Flying Fifteens got underway cleanly.

Tuesday is a layday and racing resumes with 3 races planned with an earlier start time of 1100 hrs on Wednesday.