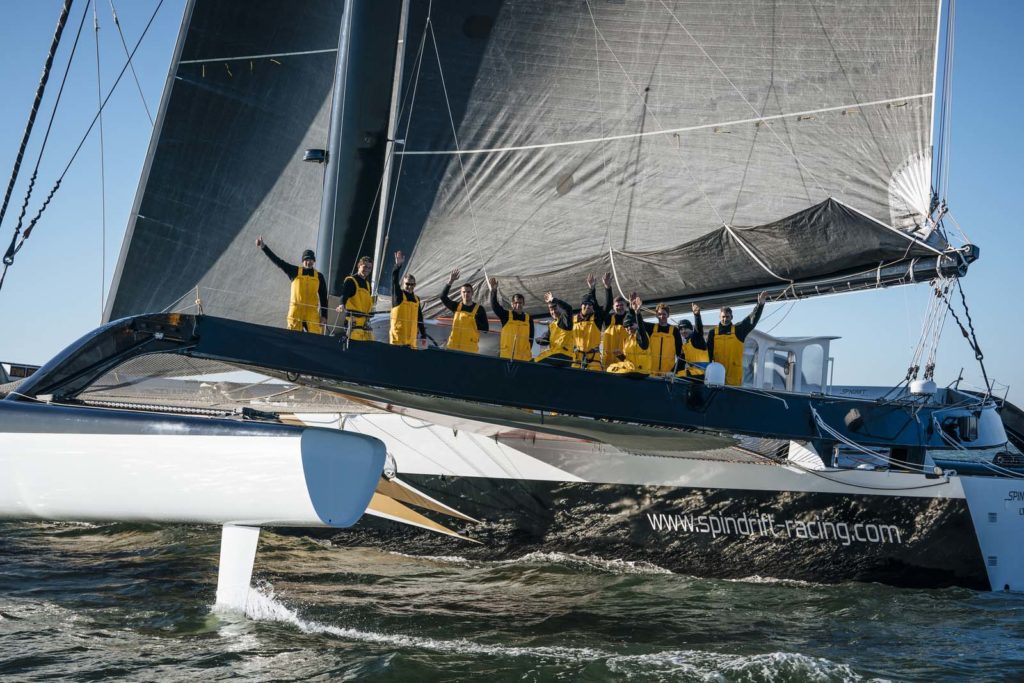 The crew of Spindrift 2 at the start of the Jules Verne Trophy record attempt.
pic by Chris Schmid/Spindrift racing

‘Spindrift 2′ crossed the start line of the Jules Verne Trophy last night to begin their 21,600 miles around the world record attempt. The Objective is to beat the existing record of 40-days 23 hours 30 minutes and 30 seconds and cross back over the line again before 20h 27′ 25″ UTC on January 13, 2020.

The twelve crew of the black and gold trimaran crossed the line in front of the Créac’h Lighthouse (Ushant) in a very moderate 15 knot easterly breeze. The relatively calm conditions are a change from the stronger conditions normally associated with a start of a round the world attempt, but by daybreak, as ‘Spindrift 2′ approached the Spanish coast, Yann Guichard and his crew were expected to benefit from these constant winds that will veer to northerly, strengthening to 25-30 knots and gusting along the Portuguese coast.

It is expected that ‘Spindrift 2′ should cross the Bay of Biscay and arrive at the Equator in a little over five days. Once into the Southern Hemisphere, the crew will be able to sail more or less directly to South Africa with a view to cross the longitude of the Cape of Good Hope in less than thirteen days. Once at the entrance to the Indian Ocean, the black and gold trimaran, will be able to assess its performance against the existing record and the potential of completing the 21,600-mile course in record time.

Yann Guichard: “There is a good weather window that shows us reaching the equator in a little over five days and the South Atlantic seems to be improving so, hopefully the first section of this record will be good. ‘Spindrift 2′ has two new rudders that will allow us to further improve on performance but nevertheless, the record will be difficult to beat! Whatever happens, it is an incredible voyage, and it’s still a human, technical and sports adventure. The crew is really motivated and my core team that has been part of this journey before. So we will leave the Bay of Biscay in relatively quiet conditions before accelerating significantly after Cape Finisterre … ”

Erwan Israel (navigator): “You have to be persistent in the Jules Verne Trophy! First you need a good, well-prepared boat, good chemistry amongst the crew and of course, favourable weather conditions. The conditions look to be relatively easy at first, which will give us a nice descent to the Equator. We anticipate that we should be able to reach the Cape of Good Hope in twelve days, which is a very good time compared to the reference time.”

Grégory Gendron, a novice to this record attempt: “I am very happy with this rather peaceful and calm departure from La Trinité-sur- Mer: it is good way to start a world tour for the first time, so it will be a really big adventure! I do not know the Southern Ocean or the Southern Hemisphere… You experience four seasons during this Jules Verne Trophy: we leave in the autumn, we enter the South Atlantic in the spring, we complete the Southern Ocean in early summer and finish in Brittany in the middle of winter … ”

Thierry Chabagny (helmsman): “I’m not the only one onboard to already have the record, there is also Xavier Revil! Six out of twelve of us have already completed the round the world in a multihull, but a coordinated crew, that works well together and knows the boat that, we have optimised over the years, is a key ingredient. ‘Spindrift 2′ is now lighter, so more able to get airborne with the added advantage of being able to adjust the thrust with rudders, so it more efficient, and more sensitive. We are trying for a third time, but the Jules Verne Trophy becomes a bit of a habit because as a crew you get hooked after the first attempt! ” 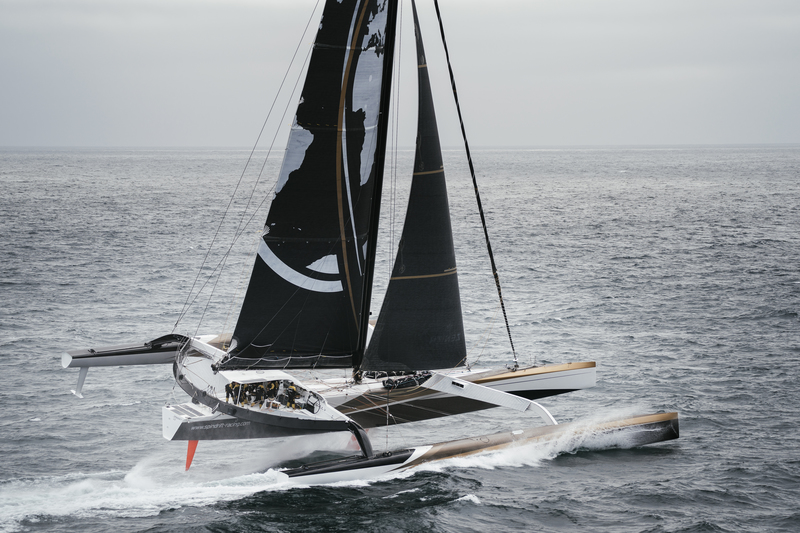 Spindrift 2 on her way around the world for the third time in an attempt to break the Jules Verne Trophy record.
pic by Chris Schmid/Spindrift racing