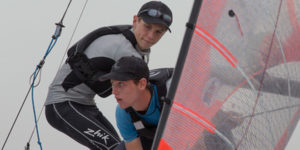 It would be a travesty if Benji Daniel and his crew Alex Burger were not widely recognised for winning the 29er World Championships in such grand style.

Well they are now (again!) as Benji is our Sailor of the Month for September – and a very fitting and deserving winner he is too, especially as he is just 16 years old and still at school.

He has been sailing since the age of 10, so in just 6 years has progressed from a beginner to becoming a World Champion. Yet in that time he has competed in 7 international regattas – so he has a remarkable talent.

Day to day reports on the SAILING Mag Blog (www.sailing.co.za) showed how they paved their way forward at the 29er Worlds, ultimately winning the title after only 4 months of training together and beating 128 competitors.

Benji and Alex complemented each other as a team, not only physically in size, but in making smart decisions. Benji, at the helm, is responsible for making sure the boat is going at top speed all the time. As Alex said “Whoever sails the shortest distance at the highest velocity, wins. Speed makes you look clever.”

In the boat, Benji’s role is to direct the boat along the shortest, fastest route possible, while Alex is the man upfront and on the trapeze. Benji noted that credit for their success goes to both team members for sharing responsibilities half-and-half in terms of tactics and implementation.

Credit must also go to Roger Hudson and RaceAhead whose idea it was to pair Benji and Alex together for the championship. Roger and Dave Hudson provided invaluable coaching support and advice in the lead up to the event, and also funded the flights to California through RaceAhead.

While other teams were accompanied by parents/coaches/managers, the pair from South Africa travelled solo, having to cook and fend for themselves after travelling a rather long indirect route to LA via Doha with only a couple of days to acclimatise before racing commenced.

This young man is certainly on his way to a glittering international sailing career and we will be hearing much more about him in years to come. Well done Benji and Alex.

NOMINATE YOUR SAILOR OF THE MONTH NOW
Who can make nominations? Anyone (individuals, clubs, class associations or administrators) may submit nominations.

So, who deserves to be the next Sailor of the Month? Give it some thought now and send your nomination NOW to: editor@sailing.co.za