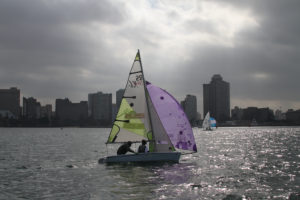 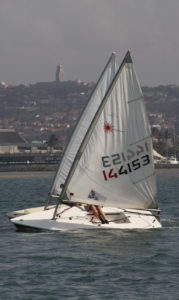 Winter dinghy sailing in Durban doesn’t get better than this; the third annual SAS Grand Slam hosted by Point Yacht Club was held in the bay over the weekend.

With a fleet of 34 dinghies taking to the water, the two largest fleets were the Oppies and Lasers. Leading the full rig Lasers, was Gregg Dobson closely followed by JP McLoughlin who is making a welcome return to the sport. Third was Siya Vato who had moments of shining on the water. Joining them in the full rig was Denmar Nel and John Eales who, like McLoughlin, is making a welcome return to the water.

A gaggle of 10 Oppies participated over the two days, with nine on the water on Saturday and experienced Iain Bowman joining them on Sunday. Vincent Vermaak owned the class, with an impressive 6 points notched up from the eight races. In second was Bowman’s younger brother Scott on 15 points, and third was Ethan Hooper, who travelled down from Richards Bay, earning himself a third. Also on the water, relishing the opportunity to compete were Marcel Vermaak, Blaine Dunbar, Connor McLoughlin, Tayghan Honicke representing Zululand Yacht Club, Iain Bowman, Thomas Hallum and Matthew Husen.

Sailing majestically on their 29er, Rob Tarboton from Henley Midmar Yacht Club, with his young crew Mike Dickenson, topped the log in the Open Fleet. Chomping at their heels, top international 505 sailor Thomas Funke who was joined by 29er sailor, Sean Hurter. Rear Commodore for Dinghies for Point Yacht Club, Myles White and Estelle Buys finished third overall and were the first Flying Fifteen. Joining them over the two days were Siseko Vato and Mpilo Khoza on an RS Terra; sisters,

Theresa and Maggie Vermaak on their Mirror; newcomers to the Flying Fifteen class, father and son team; Dominic and Marco Collett on their newly purchased classic and another father and son team Iain and Rob Bowman, who unfortunately only sailed the first day due to a collision with the Collett’s injuring their wooden classic.

Struan Campbell and Byron Watt blitzed around the course, leading the multihulls on their Hobie Tiger. They were followed by Wayne Smith and Kate Ellens from Richards Bay. Claiming the third were varsity lads Rudi Fokkens and Ryan Naidoo, who both participated in the Inter-Varsity Match Racing the week before. Duelling it out on their Hobie 14s was another father and son combo, with dad, Sean Fennessy nine points clear of son, Liam.

Race Officer for the event, Kevin Bingham set a short windward leeward course near the Durban Marina. The winds clocked around 6 knots at the start of racing, and gently built as the day warmed up.

After the prize giving, White enthusiastically shared, “Fantastic Grand Slam regatta this weekend. Well done to Dobbo with his first overall and to Jerome for not capsizing. Best act of the whole event, to epitomise what the regatta is about, Tristan Sommerville won the GoPro lucky draw, being one of ten people who sailed in all three Grand Slam events. He gave the GoPro to Tristian Uys, who also qualified for the draw, and who celebrated his birthday today (Sunday). Sailing can only benefit from having people like this in the fleet! Happy birthday Tristan.”